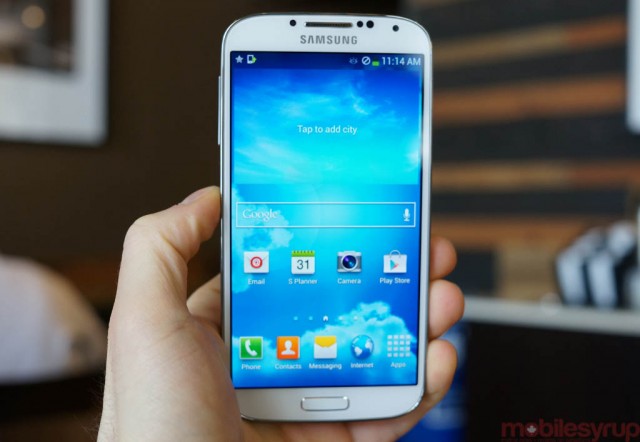 It’s inevitable that Samsung will launch a new flagship device in the first half of this year. Last week, a Samsung exec stated that the Galaxy S5 will be launching by April and that “it’s about the display and the feel of the cover.”

Reputable leaker, SamMobile, has published a post from a trusted source reportedly confirming the phone’s specs. Previous rumours indicated Samsung will come out with two variants of the Galaxy S5, one with a traditional plastic case and the other with a metal chassis, targeted to premium users. SamMobile reiterates the rumour, saying “the phone will basically have just a metallic back plate while being constructed of metal on the sides and front.”

The display, which is one of Samsung’s big focuses, is reportedly going to be a 5.25-inch Quad HD Super AMOLED display with 2560×1440 pixels. In addition, the report indicates that the S5 will have a 16MP camera on the back and run OS 4.4 KitKat. The North American variant will reportedly feature Qualcomm’s Snapdragon 805 SoC, while the international model, as per tradition, will sport a new Samsung Exynos chip. No word on whether both the metal and plastic versions will be offered in Canada.

There is also no confirmations on RAM or battery size, but previous posts suggested we’ll see the GS5 sport 3GB of RAM and a 4,000 mAh removable battery. Finally, missing from the report was a nod to whether the new version of TouchWiz that leaked will be included.