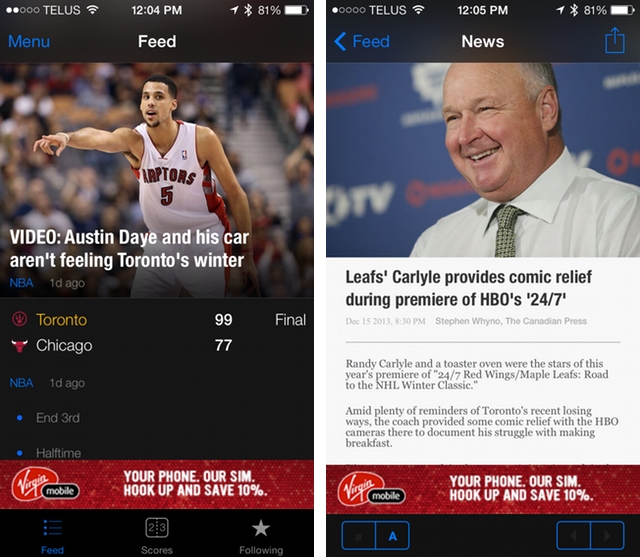 If sport is the glue of our always-connected culture, then sports apps are enablers, the data-dispensing dealers for iPhone- and Android-wielding addicts. For many, the ability to converse in public is inextricably linked to at least a passing knowledge of last night’s victories and defeats, and unites or repels depending on allegiances forged like precious gems, sharp and unchangeable.

The pressure to know about and have an opinion on a local team is immense, and because we’re no longer limited to consuming sports in a single place — traditionally in front of a television, either live or through summary — the app has become as important a tool in any fan’s arsenal as any other.

theScore saw this early on. Once touted as an independent broadcast network, which was subsequently sold to Rogers and rebranded, the core of the company’s business has always been about data. Troves and troves of data.

Initially conceived as a way for fans to follow their favourite players, teams and leagues, the app, which is available for iOS, Android and BlackBerry 10, has evolved into something else altogether: a network. Though the interaction is unidirectional, there is a sense of community and affinity with the people behind the constant updates; the company employs 35 full-time editorial writers to provide breaking news and curate Tweets for its recently-introduced Story Stacks feature.

Today, the company’s vision coheres to a sharp point: the feed. Or, more appropriately, the Feed, which initially arrives on iOS and will expand to Android in the coming months. In many ways, this year has been all about the infinite scrolling list, and according to theScore’s SVP of Product, Jonathan Savage, there is inherent value in combining all of the app’s disparate sections into a single place.

Like most streams, Feed promises to be personal and vital: it takes what already existed in My Score, another recently-introduced section of the app that focused on stats, and “turbocharges it”, according to Savage, by adding bespoke news and social media content. Previously, Top News was located in a separate part of the app, but users were so taken with it — Savage says user time within the app significantly increased after Story Stream’s introduction — that a personalized feed felt like a natural evolution. 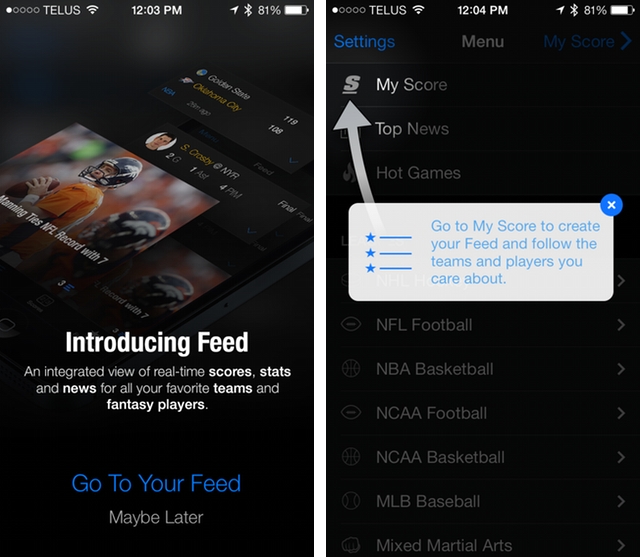 Because theScore is no longer encumbered by its broadcast TV roots, which changes course like a ship and affects all other parts of the business, including online publishing, the team can focus on creating a mobile-first vision of sports. To that end, the team introduced breaking news alerts tailored to individual tastes, so users can be reminded that the game is starting or when a favourite player scores the winning goal. “We treat mobile as its own platform,” says Savage, reinforcing the idea that phones and tablets are the perfect medium for bite-sized pieces of news.

In some ways, Feed reminds me of Twitter’s recent move to combine breaking news and high-resolution photos into its mobile apps. It only displays what information is relevant, based on teams you’ve “followed,” and pushes news written by an editorial team passionate about the sports to which they’re assigned.

Savage dismisses claims that users won’t need apps like theScore when extensive sports information is available to users of Google Now and Siri. “There is a cognitive ease and sense of convenience with Google Now [and, to a lesser extent, Siri], but theScore has much more data,” which in the end is key to any relationship with a sports team or player. The app also recently went through a design overhaul with the introduction of iOS 7, making it much easier to draw down the app’s individual components: with one tap, it’s easy to check the latest scores and news from the NHL, NBA or even Formula 1, and the flat, text-based navigation is unencumbered by chrome or depth.

“We want to be a one-stop shop for sports fans,” says Savage, whose delight for the app’s changes were unmistakeable. He, like the rest of the team, is a sports fanatic, and designs the app for himself as much the wider user base. “iOS 7 is hyper-minimalist,” he tells me, drawing parallels between recent trends in app design and theScore’s own mandate for focus. “But in that minimalism, it maintains richer images and preserves a clarity of vision.”

With Feed, theScore has finally nailed its own vision, and no one in the industry comes close.