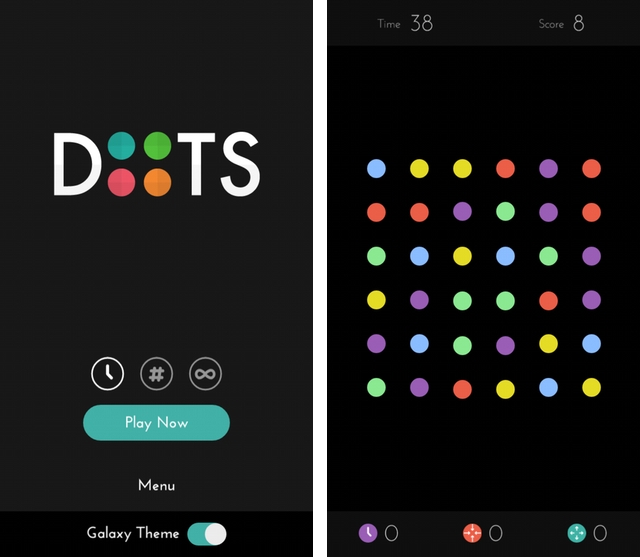 One of the most addictive games released in recent memories has been updated with a new “Galaxy Theme,” courtesy of Samsung.

Dots, the physics puzzle game from Betaworks, arrived on Android in August after a long stint as an iOS exclusive. While the company has already made a pretty penny selling in-app purchases for power-ups that facilitate higher scores, the development house experimented with a new form of native advertising-based gameplay when it partnered with General Electric for a “Gravity” mode, where all the dots would literally stumble to the floor, affected by a user-enabled gravity switch.

Now, Betaworks has partnered with Samsung for an optional “Galaxy Theme” mode, which turns the screen black, purportedly to take advantage of the company’s ultra-efficient Super AMOLED screens. This form of native advertising, where the brand is actually incorporated into the app or game to the benefit of all parties (there are no Samsung logos anywhere in the app, just a splash when first opening the app), is quite effective at promoting the company without feeling intrusive.

Dots works because users never feel like they have to spend a cent, but can do so to further their advancement. It’s also conveys an extremely simple premise — combining two or more dots to accrue scores — into a game with myriad hidden depths. If you haven’t played Dots yet, it comes highly recommended.