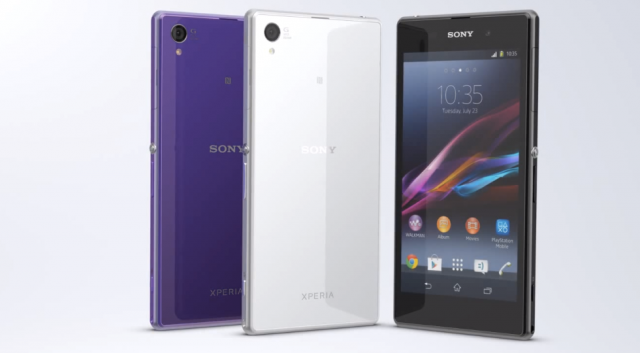 As expected, Sony has unveiled the follow-up to its Xperia Z smartphone today, the aptly-named Xperia Z1. The device looks visually similar to its all-glass predecessor, but comes in a bit taller, wider, thicker and, unfortunately, heavier.

There is good reason for the added bulk, however: the 5-inch device sports a 20.7MP Exmor RS sensor with an unprecedented (at least for Android) size of 1/2.3″, along with a G Lens from its higher-end cameras. Its F2.0 aperture and 27mm wide-angle lens means that photos should be sharper, faster and more detailed than most of its rivals, though we will wait until a review unit for a verdict on its efficacy.

The Xperia Z1 also does away with the breakable glass backing of the Z, opting instead for a unibody aluminum chassis.

According to the spec sheet, the Z1 can capture 61 images in 2 seconds, likely due to the improved DSP on the Snapdragon 800 processor. A number of other gimmicky-sounding features abound in the camera app, including Social live (posting photos and video live to Facebook) and Info-eye, an augmented reality feature akin to Yelp’s Monocle. Sony is promising an SDK for app developers to extend the camera’s functionality, too.

The device also sports a 5-inch 1080p Triluminos display with on-screen navigation buttons. Viewing angles and colour saturation stand to be dramatically better, addressing one of our major complaints from the Xperia Z and ZL.


Running Android 4.2.2 with Sony’s slight but pleasing customizations, the experience should be familiar to anyone running an updated Xperia ZL on Rogers or Bell. The requisite Walkman application, which pairs with Music Unlimited for video streaming, is pre-installed, along with Movies and Album, Sony’s customized media viewing apps. TrackID TV is an evolution of the music-identifier app, purporting to act as a second screen for identifying cast, crew, biographies and filmographies for certain TV shows and movies.

Of course, for the specs hounds the Xperia Z1 does not disappoint. There is a 2.2Ghz Snapdragon 800 SoC inside, along with 2GB of RAM. 16GB of storage and a 3000mAh battery. Cellular connectivity supports LTE bands 1,2,3,4,5,7,8 and 20, so the international model should be compatible with Canada’s networks out of the box, including Rogers’ LTE Max on 2600Mhz. There’s also WiFi b/g/n/ac and Bluetooth 4.0, along with NFC for Sony’s OneTouch capabilities.

The Xperia Z1 is also rated at IP55 and IP58 for water and dust resistance, similar to the Xperia Z. It’s not likely Canada will see a separate model this time around — Sony has likely learned its lesson in that regard — but there may be some carrier-specific changes when it finally does arrive. We’ve yet to see word as to which carriers will be picking up the 5-inch flagship, but stay tuned for more.

Finally, the device will arrive in black, white and purple variants.