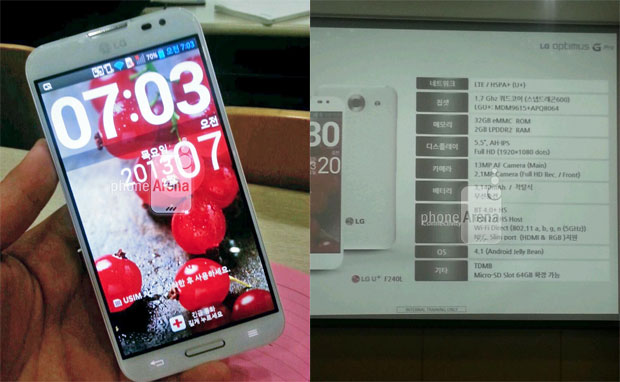 According to a leaked pair of screenshots from PhoneArena, in addition to a 5-inch Optimus G Pro, LG is planning to launch a 5.5-inch version in its home market of Korea. While we can’t verify the efficacy of the leak, it certainly looks to be the real deal: you can see LG’s QSlide logo at the top left of the phone’s notification bar, and the background is one of the unmistakable high-saturation photos of fruit that ships with every LG device these days.

But the phone itself looks awfully similar to the Samsung Galaxy Note II, right down to the wide, rounded physical home button (though the placement of the back and menu buttons is different). And while the 5.5-inch screen is expected to be 1080p, and the internal specs a little more robust than Samsung’s device, this is a phablet through and through. It also boasts some impressive specs: a 1.7Ghz quad-core Snapdragon S4 Pro SoC, 2GB RAM, 32GB internal storage, a 13MP camera, a 3140mAh battery, a microSD slot (!!) and Android 4.1 Jelly Bean.

Whether Canada will see this device is not yet known — LG is promising a new line of phones for Mobile World Congress, of which this is unlikely one — but we’re hoping that LG can produce devices for North America that are a little bit more distinctive than this one.

Talk to the bearded hand: This is LG’s commercial for ‘the most human phone ever’