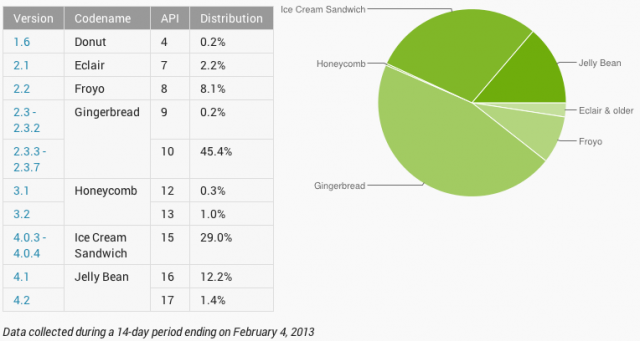 Google has updated their “Current Distribution” pie chart of where the various Android OS versions are sitting at. This chart is based on active devices and the good news is that Jelly Bean (OS 4.1 and 4.2) have increased over the past four week to 13.6% – this could be from Nexus 4 and Nexus 7 sale, or possibly just from a bunch of previous devices receiving the update. Ice Cream Sandwich dropped slightly from 29.1% to 29%. Unfortunately, Gingerbread (OS 2.3) – an OS that was officially released 2-years ago – still makes up for most of the Android devices and represents a whopping 45.6%. Donut, Eclair, Froyo are slowly falling off the map and make up for a combined total of 10.1%.

What OS is your Android device at?