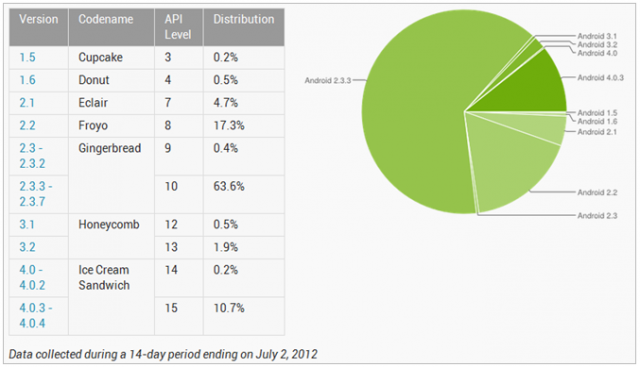 Google introduced Android OS 4.0 Ice Cream Sandwich on October 18th. Now, almost 9 months later, the OS has officially reached double diget numbers when it comes to the percentage of Android devices running a particular version. According to the Android Developers site ICS now powers 10.9% of device, up from 7.1% a month ago. This increase is probably from all the new 4.0 powered devices, such as the HTC One X, One S and One V, plus the Samsung Galaxy S III. Unfortunately the OS that still has the lions share users is the 15-month old 2.3 Gingerbread with 64%, dropping 1% over last month. Cupcake (v1.5) and Donut (v1.6) continue to drop off the face of the world and now represent a combined percentage of 0.7%.

Next month should be better for Ice Cream Sandwich numbers, plus we’ll probably see first stats on OS 4.1 Jelly Bean – which will be coming to the Galaxy Nexus, Nexus S, Nexus 7 and the Motorola Xoom.