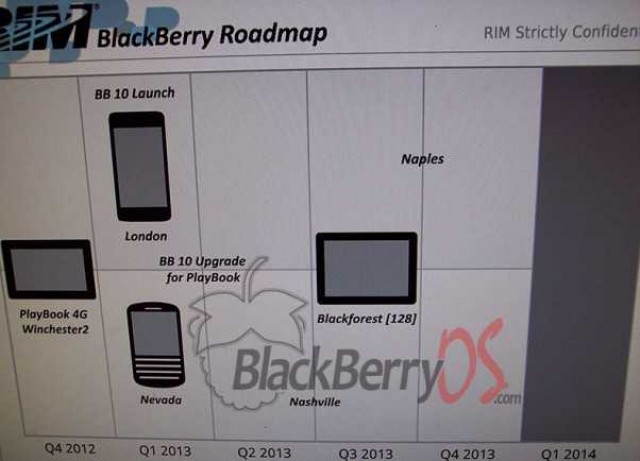 It’s unfortunate that we won’t be seeing any of RIM’s new BlackBerry 10 devices until Q1 2013, but that doesn’t stop the leaks from happening! Over the past few months the rumours have all come together and pointed towards several handsets, namely the London, Lisbon, Milan, Nevada, Black Forest.

Today, according to a post on BlackBerry OS, reveals a potential new roadmap of RIM’s upcoming devices. The devices all live up to their names and the schedule is as follows: 4G PlayBook, called the “Winchester,” is the BlackBerry PlayBook with 4G connectivity – this will probably come Rogers, Bell and TELUS in the Q4 2012 timeframe. During RIM’s recent quarterly report CEO Thorsten Heins stated this long anticipated tablet will be available soon. Next up are the BlackBerry 10 devices, first the rumoured “London.” This is most likely the L-Series all-touch handset we saw in last weeks leak. In addition, the “Nevada,” probably is the N-Series physical QWERTY BlackBerry 10 device. Both of this will be hitting the masses in Q1 2013.

In addition, it looks like RIM is scheduling a PlayBook update (probably OS 2.1) coming in late Q1 early Q2. Remember the loooong rumoured 10-inch PlayBook, yes, the “Blackforest” could be coming to life in Q3. Finally listed on the roadmap are devices called the Nashville and Naples.

Seems to be some pretty cool stuff happening… we just have to wait another few months.