Infographic: 79% of Canadians don’t leave home without their smartphone 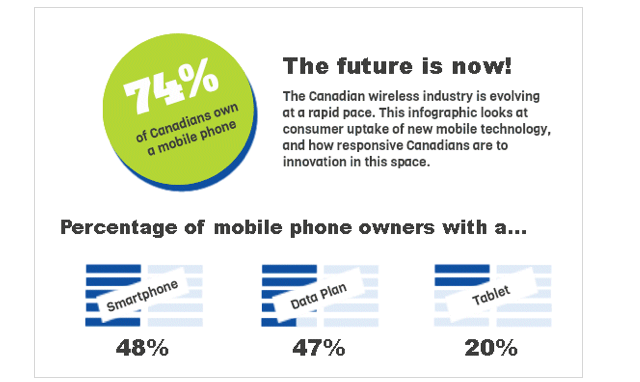 It’s always good to see things in pictures. This infographic was compiled of recent Canadian mobile stats from the CWTA’s “2012 Cell Phone Consumer Attitudes Study,” plus comScore and others. There’s nothing terribly shocking, however, 74% of Canadians now own a mobile phone, which represent well over 26 million.

According to the stats, 48% own a smartphone and 47% of those are hooked on a data plan. 93% of people who own a smartphone send/receive text messages – the CWTA reported that Canadians sent 78 billion text messages in 2011. Other popular smartphone activities are searching for info, surfing the web, email and accessing social networking sites like Facebook. The chart also revealed that 79% of Canadian don’t leave home without their smartphone… which shows how connected we’ve become. Check out the full infographic below.