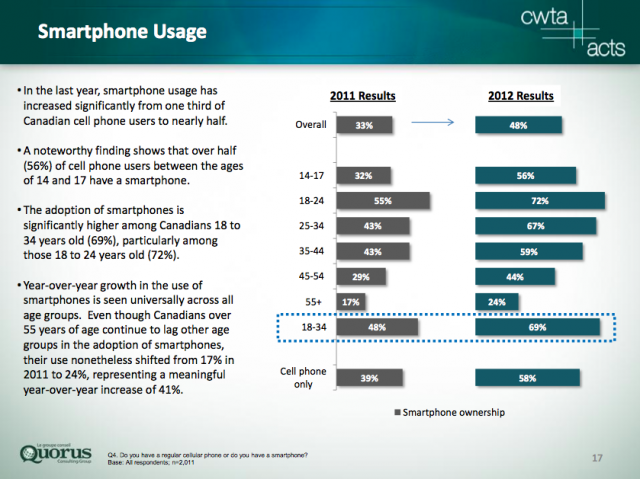 Canadian stats are hard to come by. Occasionally comScore, the Convergence Consulting Group and IDC release their estimations, but now Quorus Consulting, on behalf of the Canadian Wireless Telecommunications Association (CWTA), have come out with a massive report called “2012 Cell Phone Consumer Attitudes Study.”

It’s huge. 100 pages huge. Over the next few days I’ll did through it all and do several posts as it’s incredibly informative. The study was completed between March 9th to March 28th, 2012 and surveyed a total of 2,427 mobile phone users (2,011 completed a phone survey and 416 completed the online survey). The report is broken down into several sections that range from mobile phone usage, mobile banking, mobile app, mobile donations, mobile health and mobile music.

According to their findings smartphone usage in Canada has increased from 33% in March 2011 to 48% in March 2012, representing an impressive 15% increase. This is similar to what all the carriers have communicated in their quarterly reports. Specifically targeting in on age groups, 69% of those between the ages of 18-34 have a smartphone, while 24% of those in their “retirement years” aged 55+ have a smartphone. Basic talk and text phones are slowly fading away. Interestingly, it seems the trend of dropping your home phone has increased as those surveyed who had a cellphone only household was 58% in 2012, showing an increase of 19% from 2011.

Breaking down the smartphone penetration per province, it’s Alberta with the largest smartphone usage with 61%, followed by British Columbia with 53% and Ontario with 51%. However, there’s more activity coming from Manitoba and Saskatchewan as smartphone adoption has more than doubled within a year, respectively sitting at 44%. This is probably due to the heated competition and both SaskTel and MTS rolling out their 4G networks.

The report also stated that “The use of mobile phone data plans also increased compared to 2011, from nearly 4 in 10 cell phone users in 2011 to nearly 5 in 10.” Unfortunately there was no stats on the average dollar amount a customer pays per month, nor any indication on which carriers.

Interesting stuff. There’s a few slides from the presentation below. I’ll follow-up with the tablet results, mobile banking and music stats in a separate post over the coming days. 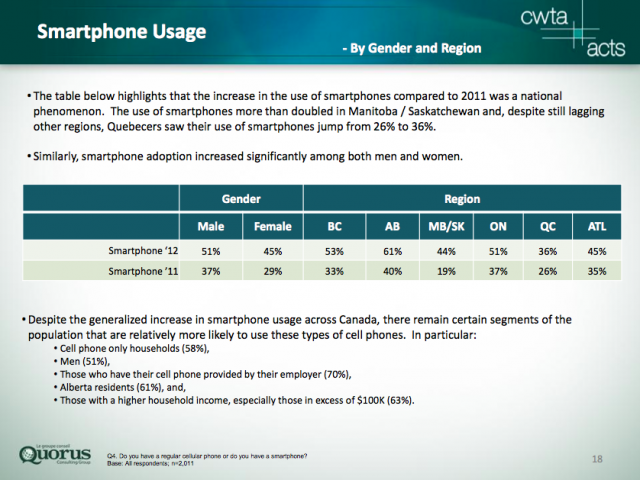 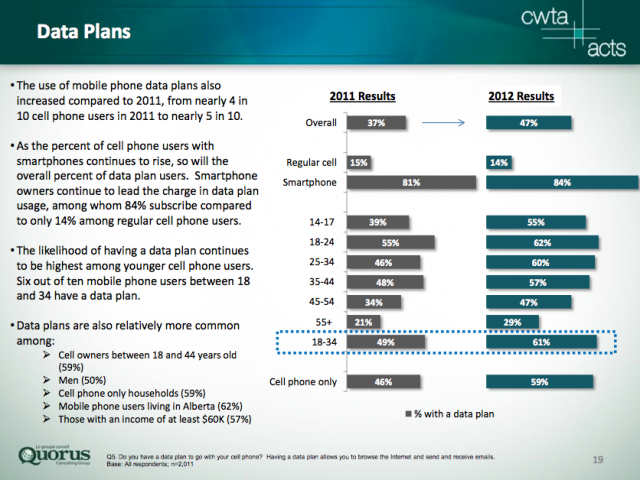 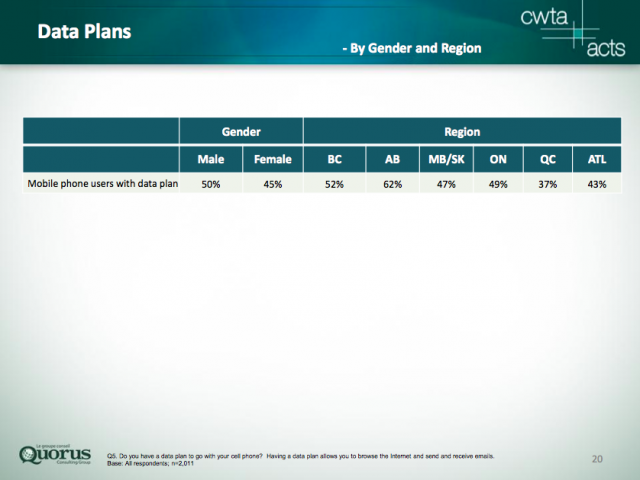