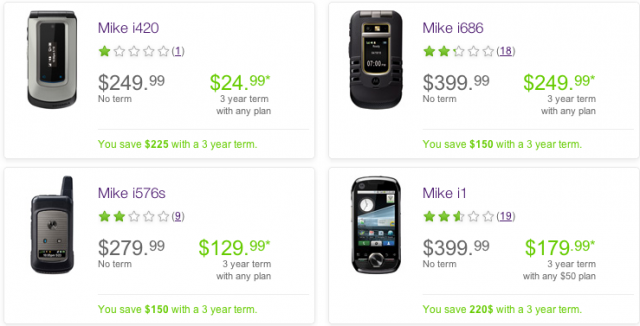 Sprint, the third-largest carrier in the US, announced that it will shut down its 2G iDEN network on or around June 30th 2013, obsoleting its push-to-talk network. TELUS currently runs a similar network and has a roaming agreement with the carrier that could be affected if the company closes down cell sites around the country.

iDEN was developed by Motorola and is a much older technology than what we currently use now; it operates on much narrower frequencies than current HSPA and LTE networks. It was initially developed to connect devices quickly using compressed audio, which leant itself perfectly to push-to-talk functionality.

TELUS operates its Mike network for a shrinking number of legacy business devices, but its push-to-talk feature is still widely used in certain markets. Its last launch was nearly a year ago, the Motorola i420, and there were some awesomely hardy devices like the Motorola Brute for which we did an amazing video testing its strength.

Jim Senko, vice-president of Small and Medium Business Marketing at TELUS, sent us this statement in response to Sprint’s announcement:

Today’s Sprint announcement is as expected and we have received a 12 month notice to this effect from Sprint-Nextel.  The Sprint iDEN turndown has no impact on the vast majority of our Mike base, and we are confident that our U.S. and international roaming capabilities on HSPA/LTE offer a great alternative for clients for whom roaming is an important business need.

TELUS currently has no plans to turn down our own iDEN network, but will evolve from the Sprint-Nextel iDEN partnership to launch a Push to Talk solution on LTE well before any shutdown of Mike.  TELUS is focused on developing LTE as a high speed data network with built-in Quality of Service and low latency perfectly suited for Push to Talk over IP, rather than launching interim solutions currently available on HSPA.

TELUS will likely come out with a PTT system similar to Bell, as has been rumoured for some time. But instead of doing it over existing HSPA networks they will wait until there is a sufficiently-large national rollout of LTE and base it on the low-latency 4G technology. Very smart.

TELUS starts to wind down its iDEN network

Motorola i1 now available on TELUS’ Mike for $399.99 no-contract