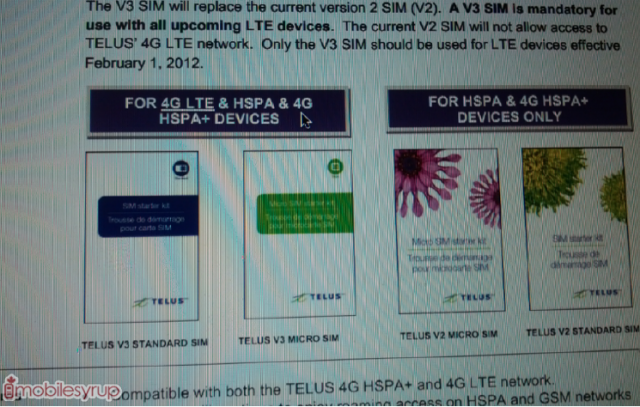 The LTE (Long Term Evolution) race has been active between Rogers and Bell for over 6 months now. Both companies rushed to be “first” in various Canadian provinces. Now, the next major wireless player seems to be prepping to join the LTE party. TELUS announced in a recent press release that they’ll be officially turning on their LTE network “later this quarter”. However, an internal doc that we received might reveal the launch date is actually much closer. New SIM cards (version 3) will be rolled out on February 1st – the doc states that “A V3 SIM is mandatory for use with all upcoming LTE devices. The current V2 SIM will not allow access to TELUS’ 4G LTE network. Only the V3 SIM should be used for LTE devices effective February 1, 2012.”

These new SIM cards will be compatible for both their upcoming LTE network and 4G HSPA+ network. TELUS has already announced that they’ll be releasing the LTE-capable Samsung Galaxy Note (expected mid-February) and the Tab 8.9 LTE… so hopefully an LTE announcement and coverage map is coming soon.