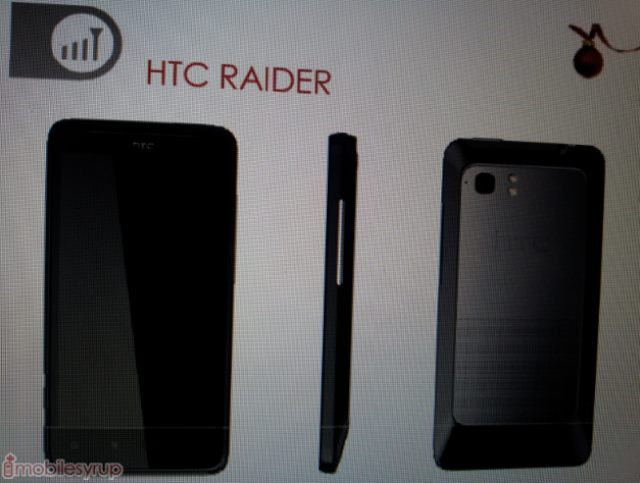 Rogers is set to unload their big Q4 devices and we’ve been given potential launch dates and pricing. Rogers has already come forth and announced the Samsung Galaxy S II LTE and the Motorola RAZR. The GSII LTE is $199.99 on a 3-year and the RAZR is $149.99 on a 3-year and both are expected, not confirmed, to be widely available on November 4th. Next, the HTC Raider, also known as the HTC Holiday, is a device that we were tipped on over a month ago will be coming to Rogers. This is their second LTE device and will join the Samsung Galaxy SII LTE. As for the price point, this is confirmed and will be $149.99 on a 3-year term, unfortunately we have no word on the no-contract pricing yet. The specs on the Android OS 2.3 Raider have it coming with a 4.5-inch qHD display (resolution of 540 x 960), 8 megapixel camera that shoots 1080p HD video. The other device that was forwarded to us is the Samsung Galaxy S Glide, we’ve seen pictures of this from a media event a few weeks ago but can now confirm the 3-year price to be $149.99 on a 3-year plan. Our tipster stated this is expected to be available as early as November 1st.

In addition to these devices, Rogers will unload a sweet promo. Rogers will give a free Samsung Galaxy Tab 10.1 for those who activate a new family plan, this must be on 2 lines with a voice and data plan. However, if you’re only adding 1 new line to an existing account and change to a family plan, the Tab 10.1 will be $150 instead.