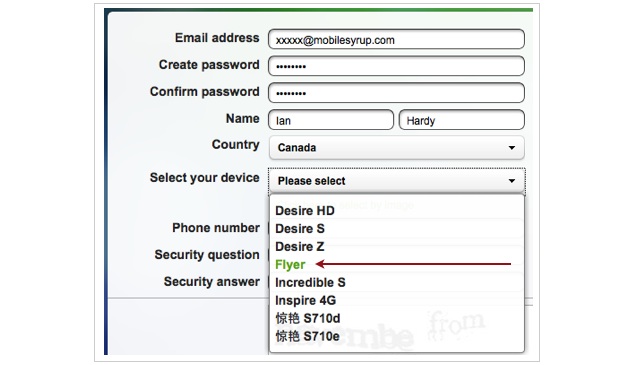 HTC officially announced that they’ll start selling their first tablet called the Flyer “to customers globally during Q2 2011”. There was no confirmed release date for Canada but one of our tipsters stated back in February that this Gingerbread 2.4 powered Android might be heading to TELUS (will be upgraded to OS 3.0 Honeycomb). The Flyer has been silent ever since.

Taking a quick look at HTCSense.com Canadian section tonight revealed a bit of a treat as the Flyer has been added in their drop down menu, which has proven to be a good indication of an upcoming launch. The last time we saw a device pop up on HTCSense.com was with the TELUS Desire HD and it only took 2 months for this to officially be released… so we could possibly see a Canadian Summertime launch of the Flyer.

Notable specs of the Flyer have it coming with a a 7-inch touchscreen display (resolution of 1024×600), 1.5GHz Qualcomm single-core processor, 1GB of RAM, 5 megapixel camera with auto-focus and a 1.3 megapixel front facing camera and WiFi.