Ironic: Bell awards US company to manufacture mobile phone displays for all The Source stores 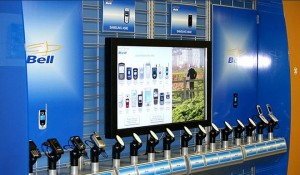 Back in March Bell announced they had taken over all 750 locations of The Source. The price they paid was $135 million and they’ve already started to sell their Bell TV products and come January 1st you’ll see their mobile phones available (including Solo and Virgin Mobile).

A complete overhaul of the brand is already on the way. Wade Oosterman, President of Bell Mobility in July said “The idea is to make it super convenient for people to actually buy those products and services. The Source has products already today that create traffic from youth and The Source will give additional reasons for youth to come and visit coming January 2010…This is an environment that is a comfortable environment for tech savvy clients”.

Specifically when it comes to the mobile phone display cases, Bell has contracted Vira Manufacturing. This is an organization that they’ve worked with in the past to create their display areas. From what we’ve been told the value of the deal is worth well over a million dollars.

So why is this so ironic? Well, here is my reasoning. In the midst of the CRTC looking into the foreign ownership of Globalive, one of the carriers to oppose them launching was Bell mainly for “not being Canadian enough” and getting financing from an company outside company. I know it’s different from launching a wireless brand to contracting a display company, but I find it a bit odd and a very interesting choice, especially at this point in Canadian wireless that Bell would go with a non-Canadian company when there are so many well known capable and competitive organizations right on our home turf.

The million dollars goes south and so did the Canadian jobs.
Just a thought.