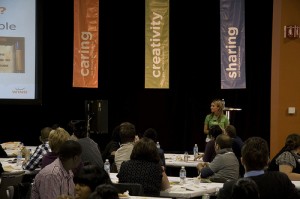 A couple days ago the interwebs went wild from rumours of another leaked WIND Mobile (Globalive) lineup and launch plans. This time we heard such devices included the BlackBerry Bold 9700, HTC Snap & Huawei U8220. In addition, the rumour stated that WIND will have No contracts, No System Access Fee, No Caller ID or Voice Mail fees and No in province Long Distance.

Chris Robbins, WIND Chief Customer Officer, has written a post on the company blog about the leakage. He states “The latest “leak” really generated a lot of buzz. The reality is that as much as we’d like to come to the market with at least a bit of a surprise, the more people we talk to about how we’re going to change the Canadian wireless market, the more people share it. This is true whether we’re talking to media, distribution partners, agencies, and newly hired staff.

The challenge with this type of second- and third- hand information though is that it’s usually just a reflection of the truth, and not fully accurate. We’re still not releasing details of our service plans or handsets until launch, but it’s great to see the excitement!”.

What we do know for sure is that Wind will launch with 6 devices and have 3 plans. With all this excitement, WIND has also stated they have started construction of their first 8 stores and have started training in-store and call centre people.

Honestly, you have to love and embrace their enthusiasm for plowing ahead. We are looking forward to October 23rd – this is the day the CRTC will put the foreign ownership issue to rest and announce if Globalive will be able to proceed or not in launching their brand.

Wind CEO talks about how bad incumbents Customer Service is