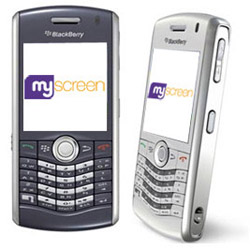 Toronto-based MyScreen Mobile has continued to make significant moves in hopes of dominating the mobile advertising space. This time they have taken their technology to India and filed a patent application. Myscreen has filed patents for its technology in the USA, Canada and other parts of the world.

MyScreen recently secured a $10 million investment to grow the company in other counties and it seems like India is the first move. If you are unfamiliar with MyScreen, they are a permission and incentive-based advertising for your mobile phone. It allows mobile subscribers to be compensated for the advertising (images, text or video) that shows up on their device. Supposedly you’re in control of when, what and how the advertisements shows up and the payout is in cash, ring tones, extra air time, music downloads, and games.

About the move into India, Christian H. Meissner, Executive Vice President, Myscreen, said “The mobile phone market in India is predicted to grow to 500 million subscribers by 2010. One of our strategies is to target the rapidly growing BRIC countries (Brazil, Russia, India and China) where we feel advertisers will now have a utility to reach these consumers with ease”