BMW offers choice with the new 7-Series and i7 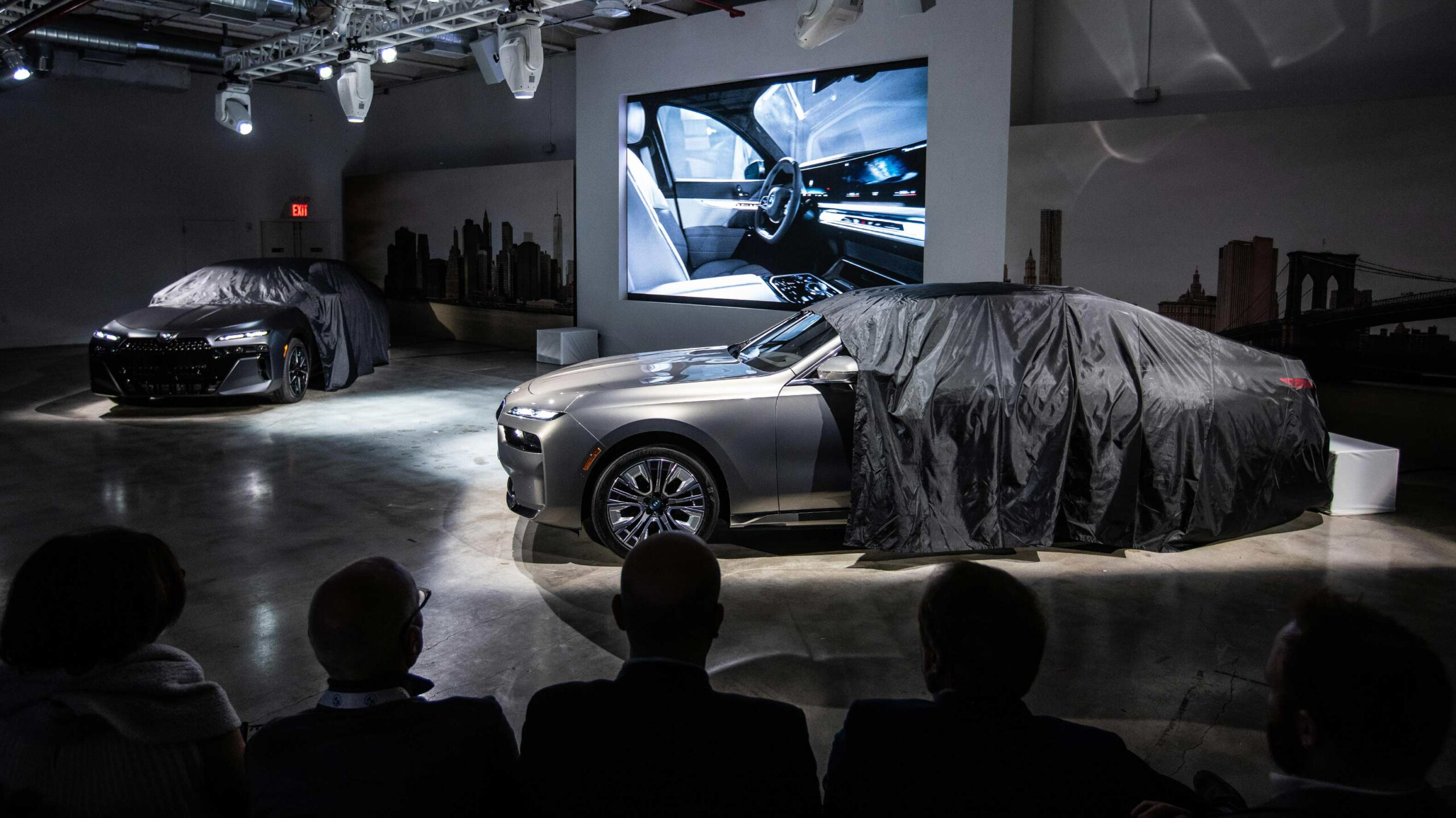 After going hands-on with BMW’s i7 at an event in New York City last week, the company’s current electric vehicle (EV) strategy is coming into clearer focus.

This is the automaker’s flagship BMW EV, and it packs all the high-end options you’d expect from the German manufacturer, plus a few extras like a 31-inch 8K TV and more.

The car is luxury at its best. BMW knows that it needs to compete with the new Lucid Air and the affluent Mercedez-Benz EQS, and it didn’t hold much back this time around. 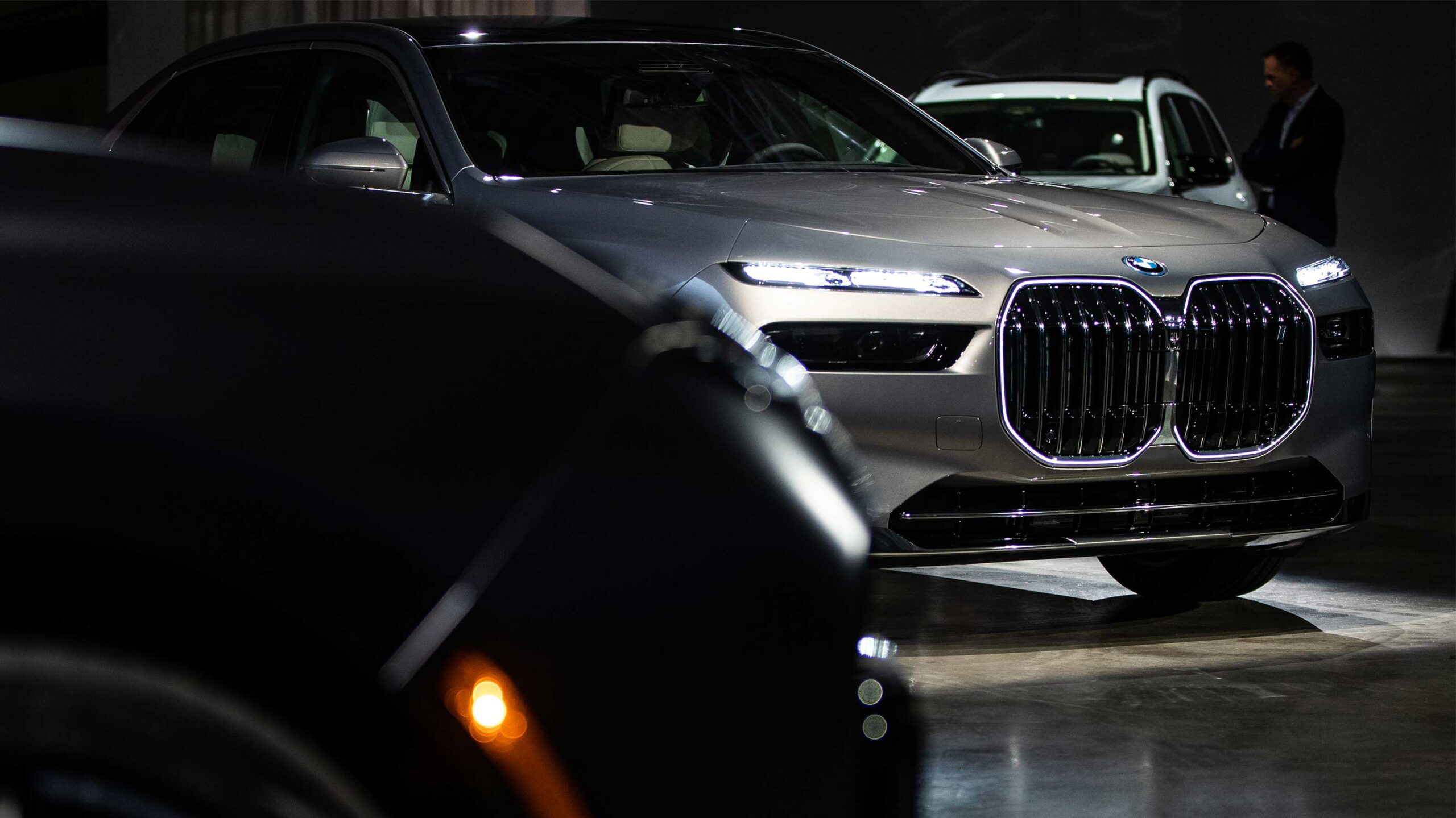 The i7 is part of the new lineup of the BMW 7-series. This means that you can get the same-looking car with either an electric or traditional drivetrain.

For the purpose of MobileSyrup’s tech-minded audience, I’ll mostly be referencing the i7, but beyond how it feels to drive them, both options are very similar. 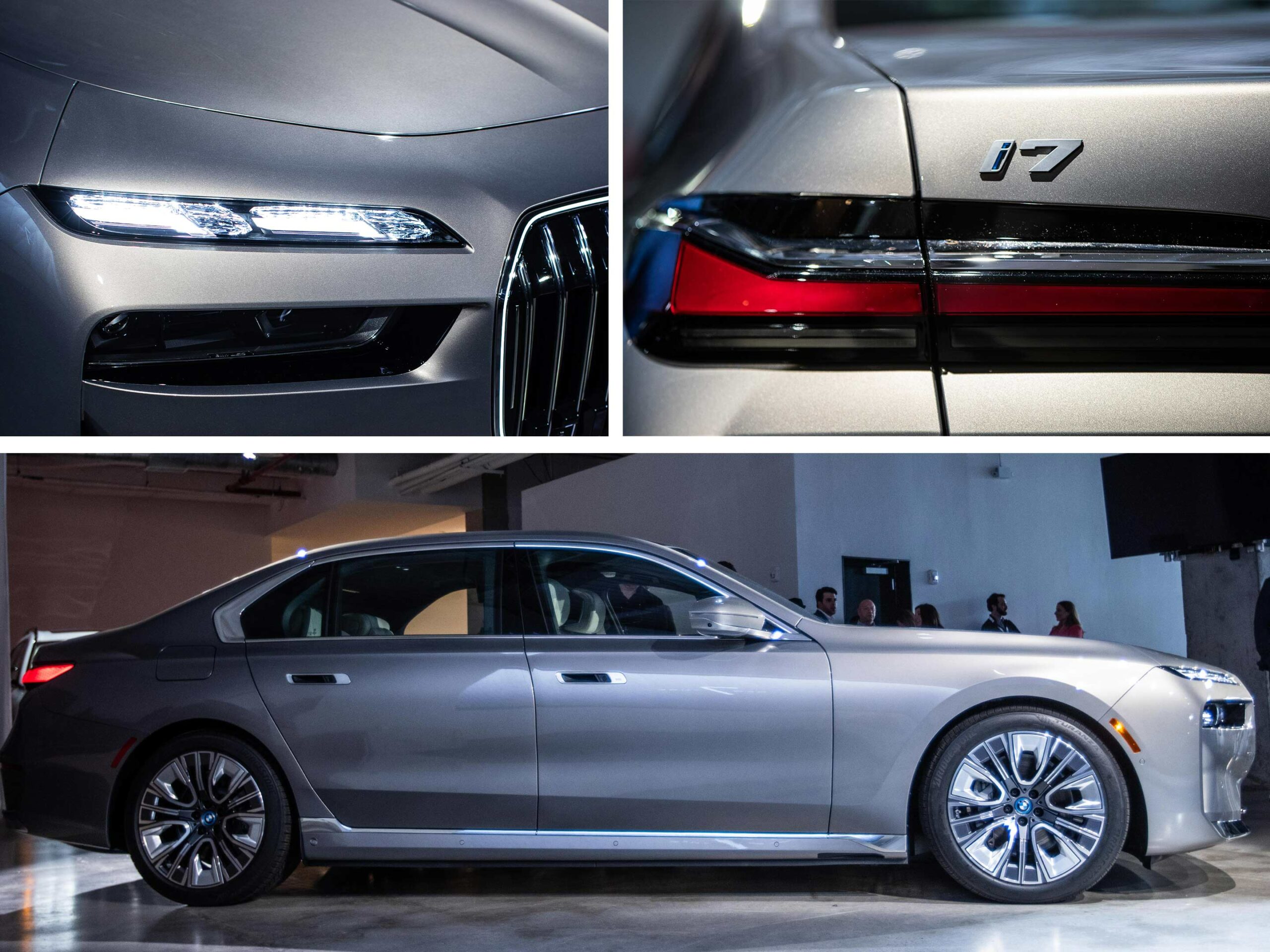 The electric model features two electric motors with a combined horsepower output of 536. This car should jump off the line and can hit 100km/h in roughly 4.5 seconds. I couldn’t drive one just yet, but since the massive BMW iX was so fun to drive, I have a lot of faith in BMW’s driver experience engineering team.

The range of the car is estimated to be around 482km (930 miles), which should be more than enough for most people since it’s over the 400km sweet spot.

Walking around the i7, I was enamoured with the car’s lines. The new 7-series design seems more angular and futuristic while maintaining that classic executive body shape that exudes status. 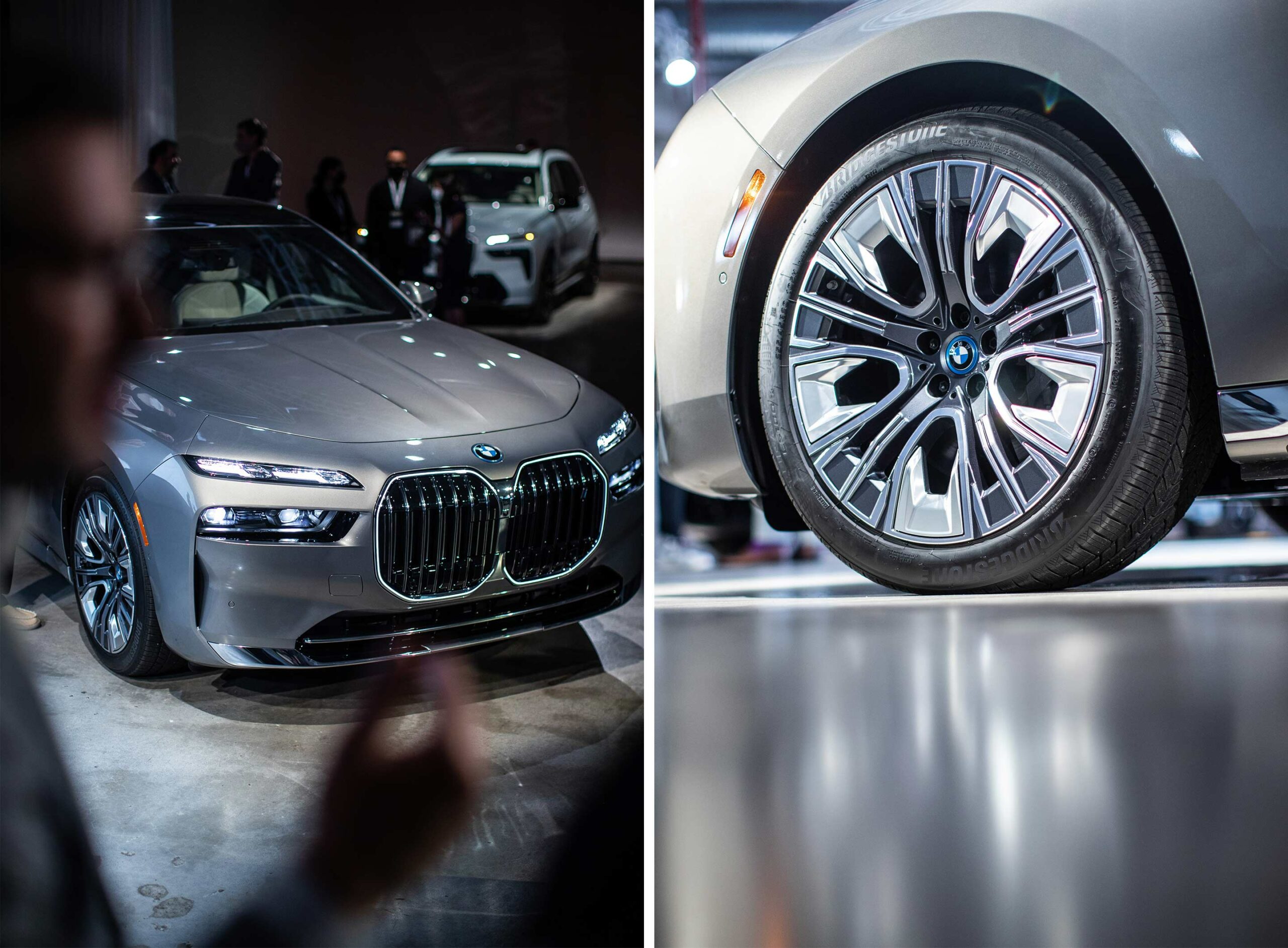 The company showed off light and dark grey trims during my time with the new 7-series, and both looked equally stunning. However, I was leaning towards the more silver since it looked more like a classic BMW to me. To bring this classic look to life on the i7, BMW has added grill lines to the ‘Kidneys,’ and it looks fantastic (Kidneys is BMW’s branded name for the vehicle’s grill).

A light strip also glows around the grill that gives the car a subdued but futuristic look. The company has been playing around with the Kidneys in its last few vehicles, and I think stepping back to a more traditional look was the perfect choice for the i7.

“Hopefully, I’ll get to drive it someday, but at this point, I think I would even be happy being a passenger — as long as I’m in the backseat.”

Moving closer to the vehicle reveals small details like small glass gemstones in the headlights made out of Swarovski crystals. There’s a lot to be said about these headlights. They feature a new thinner design that will likely become more prominent across the BMW lineup, and they also sparkle in the sun. Finally, they even combine with the light around the kidneys to light up and wake the car as the driver walks closer. 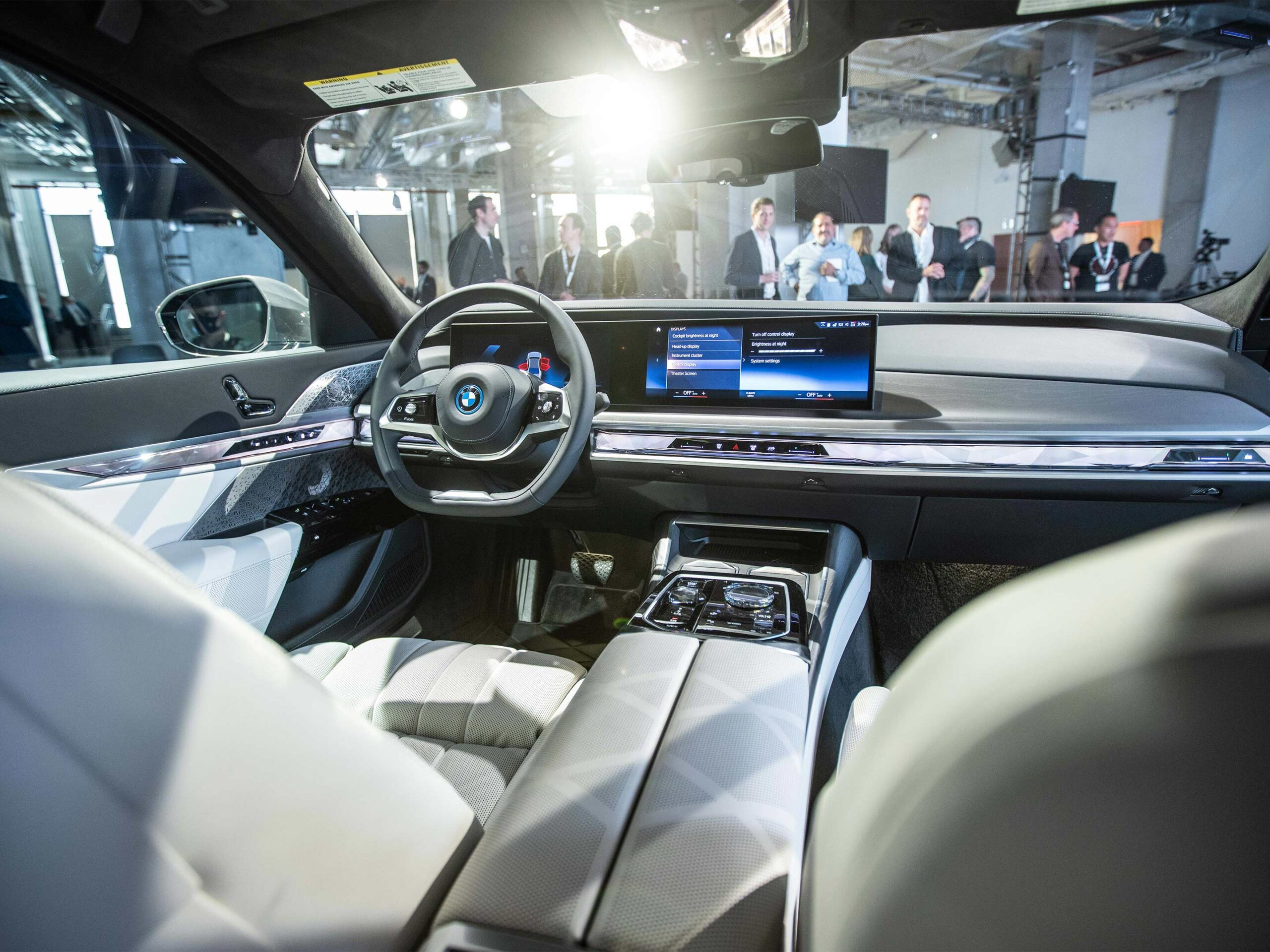 I’ll save the rest of my exterior impressions for my upcoming hands-on with the car, so we’ll move inside for now.

This part of the vehicle is extraordinary and might be one of the most luxurious cars I’ve ever been inside. The back seat on the passenger side reclines incredibly far and is one of the comfiest seat I’ve ever used in a car. Besides the rear seats, there are even small screens in the doors to allow passengers to turn on seat heating, massaging, the window shades and more. 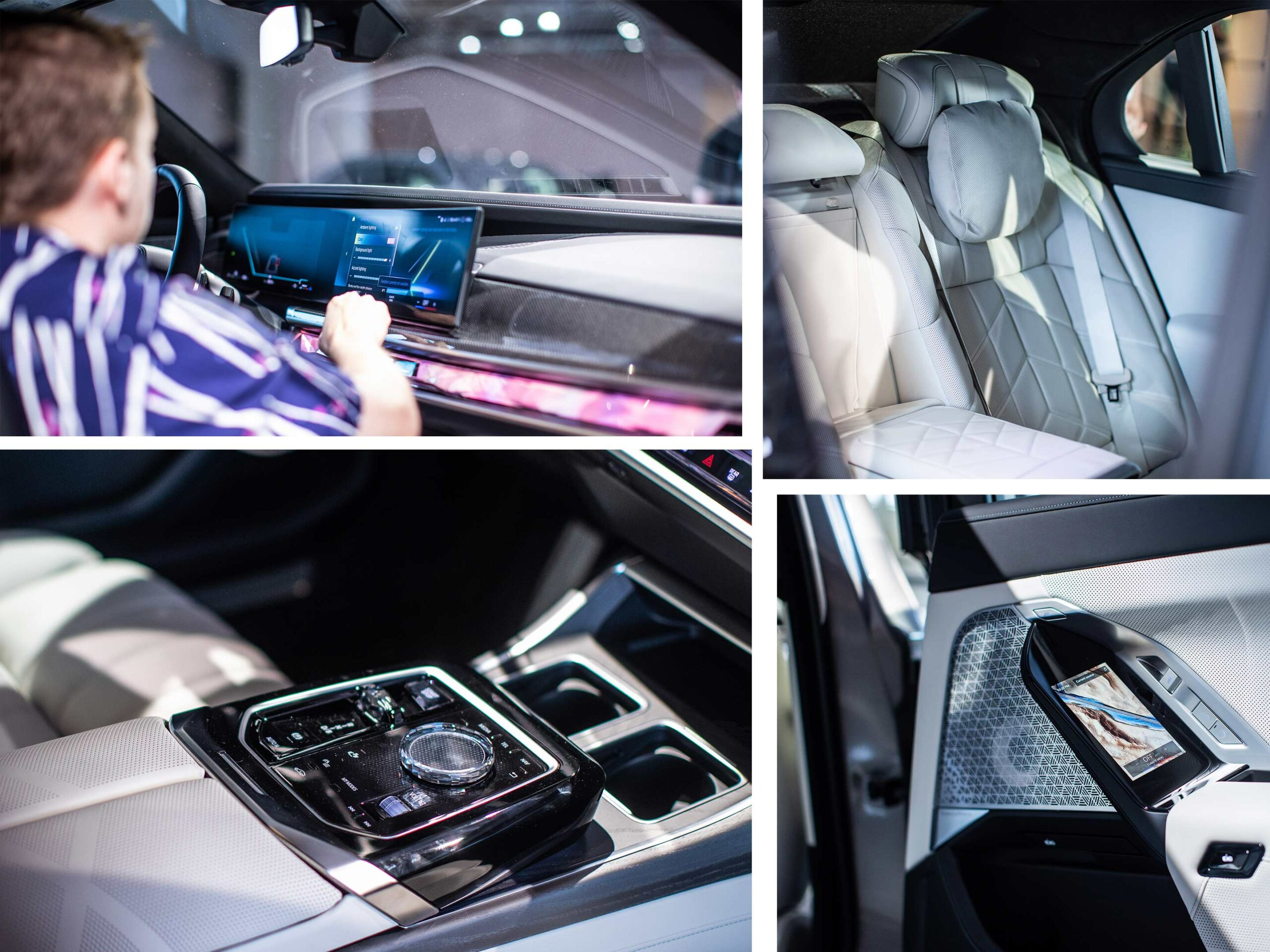 These little screens are roughly the size of a phone screen and make controlling the plethora of tools in the rear seat easier than asking the driver to do it on the main display.

Speaking of the main display, it’s the same iDrive 8 setups as the BMW iX, and it looks just as good here. The screen is bright and has a decent refresh rate, so scrolling feels responsive. 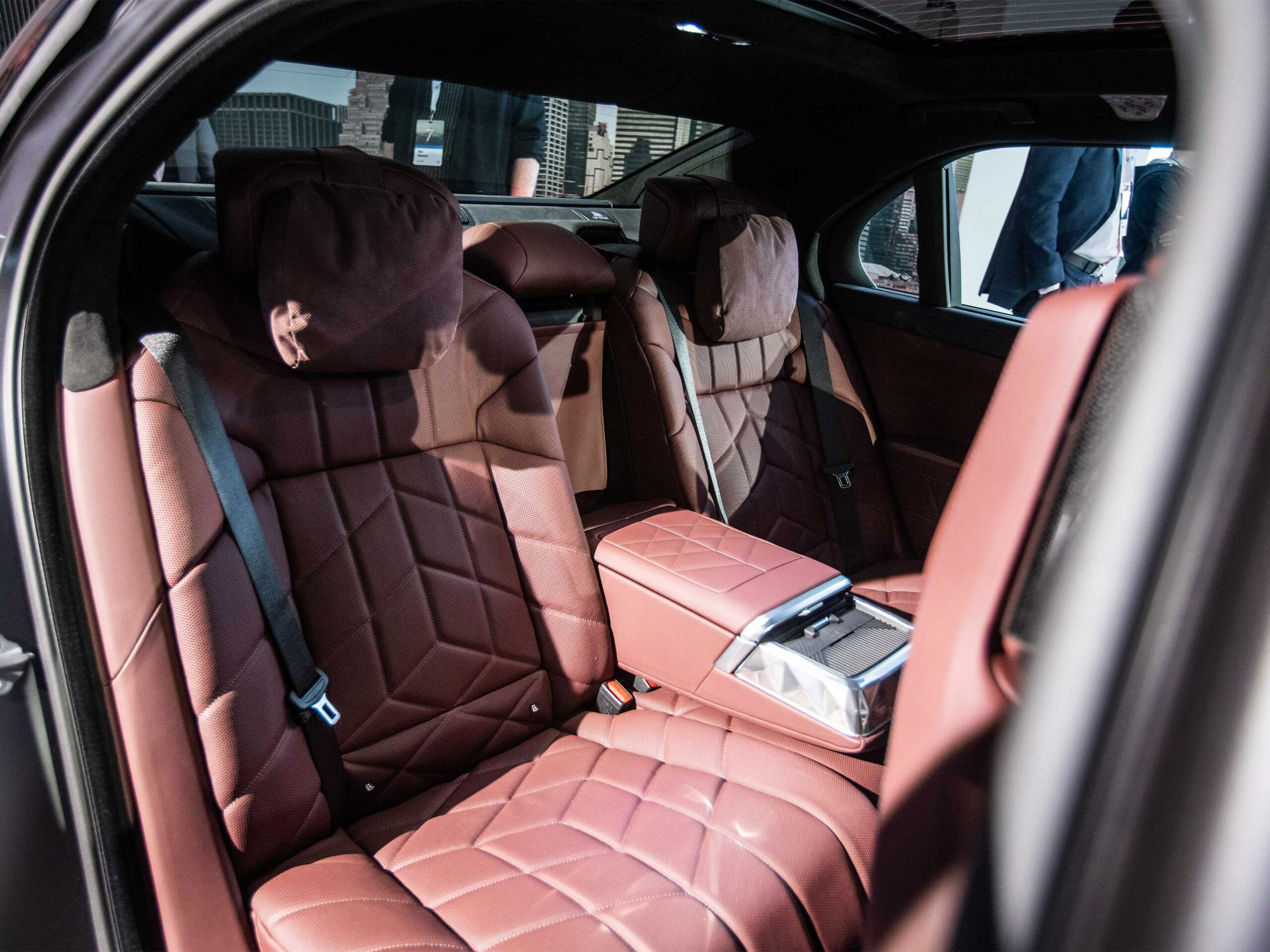 The most impressive display in the car is a sizeable 31.3-inch TV that folds down in the rear seat and gives passengers the ability to watch content on Amazon’s FireTV OS. This means that you can view Prime Video, Netflix, YouTube, and more from your car’s backseat.

In the demo unit, the TV was only running a demo screensaver, so we were unable to test the fire TV, but you can adjust the angle and placement of the TV to make it comfortable for most viewers. Notably, this screen also has a camera in it, so it should be possible to make video calls at some point.

What’s exciting about the screen is that it’s in a car with a great speaker system and a comfortable back seat. Sure it’s a luxury car, but I’ve never wanted to stay in a car and watch a movie before, and now BMW has made that a possibility. 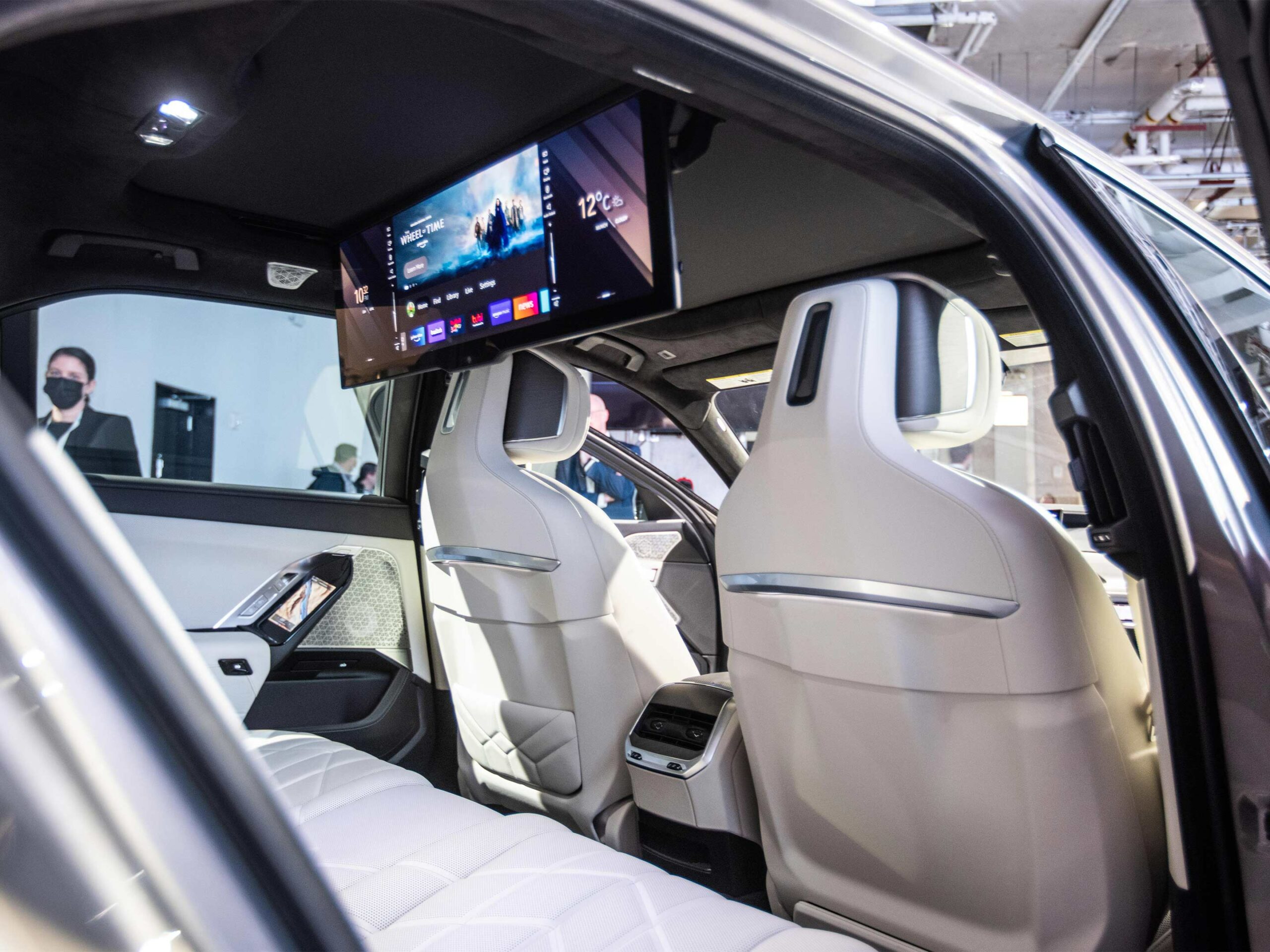 I’ll also mention that there are two headphone jacks on the rear of the screen and an HDMI port. There are no 120-volt outlets in the car, but you could get an inverter for the 12-volt that would likely power a Blu-Ray player or game console.

In modern BMW style, the company uses a few different types of materials on the inside, including a new light bar that stretches from one side to the other. This bar can change colours and looks more subtle than I expected.

Where we go from here 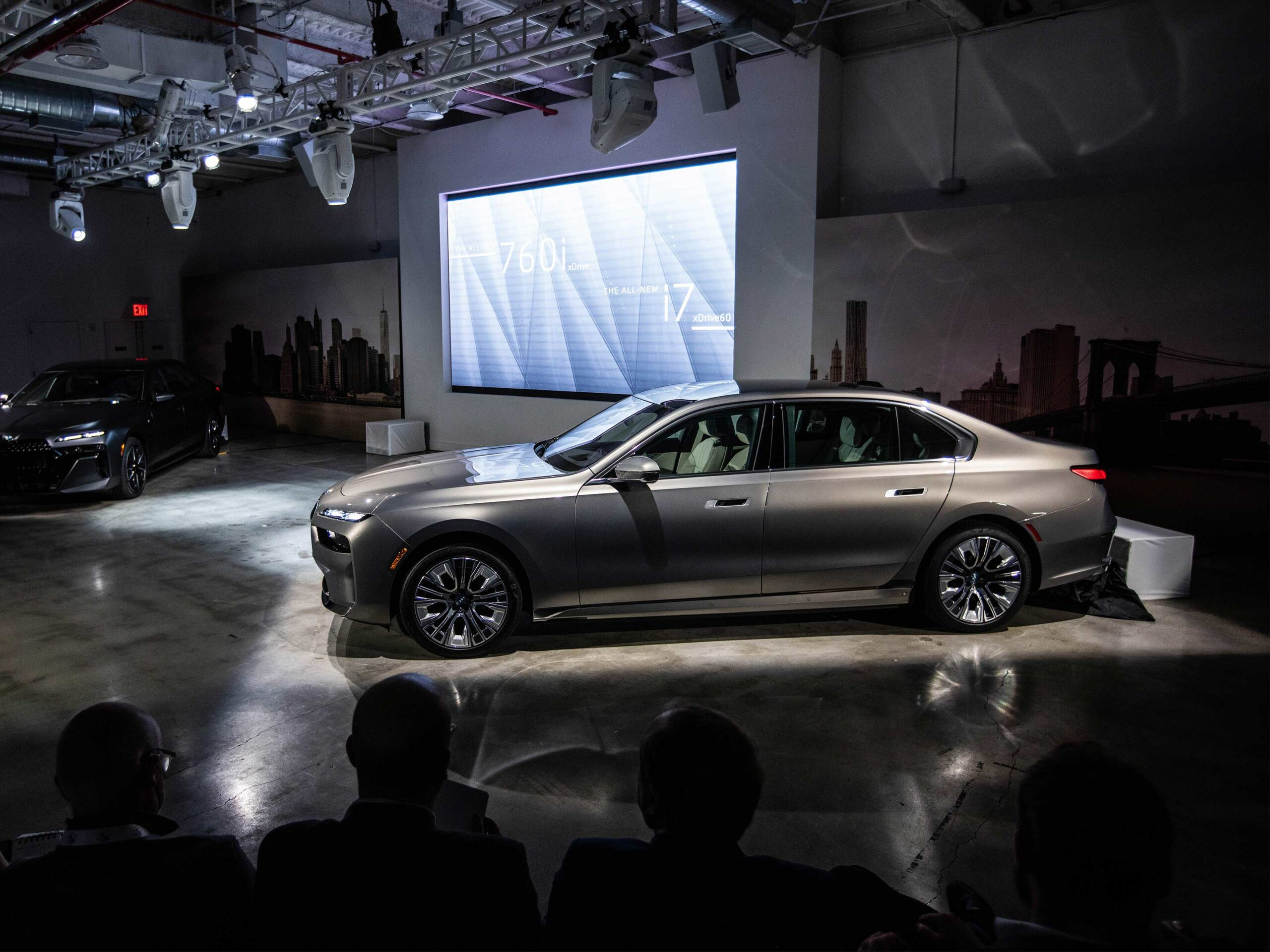 All photos in this article were supplied by BMW

There’s undoubtedly a lot to cover with the new i7, but the most important factors are its maximum range of 482km, its 150kW fast charging specs and its stellar design.

Hopefully, I’ll get to drive it someday, but at this point, I think I would even be happy being a passenger — as long as I’m in the backseat.

My only qualm with the car is what it represents regarding BMW’s electrification strategy. The company is still making two versions of a lot of its cars — one that’s electric and another that’s gasoline-powered.

I’d love to see the automaker push more wholeheartedly forward with an electric vehicle (EV) that has no gasoline equal. The new i7 is more powerful than the standard 7-series, but it’s still part of the same family of cars. Like the iX, it’s also lacking a front trunk, 120-volt outlets and other perks that make EVs just a little more fun than regular cars.

I understand why BMW is selling two versions of its automobiles in each class. Consumers like choice, and it makes sense for BMW to give it to them. However, the company is making stellar EVs poised to get even better in the coming years, and it should start making that known now.