New to PC gaming? Here are some of the many ways to buy games

There are plenty of options out there for buying PC games 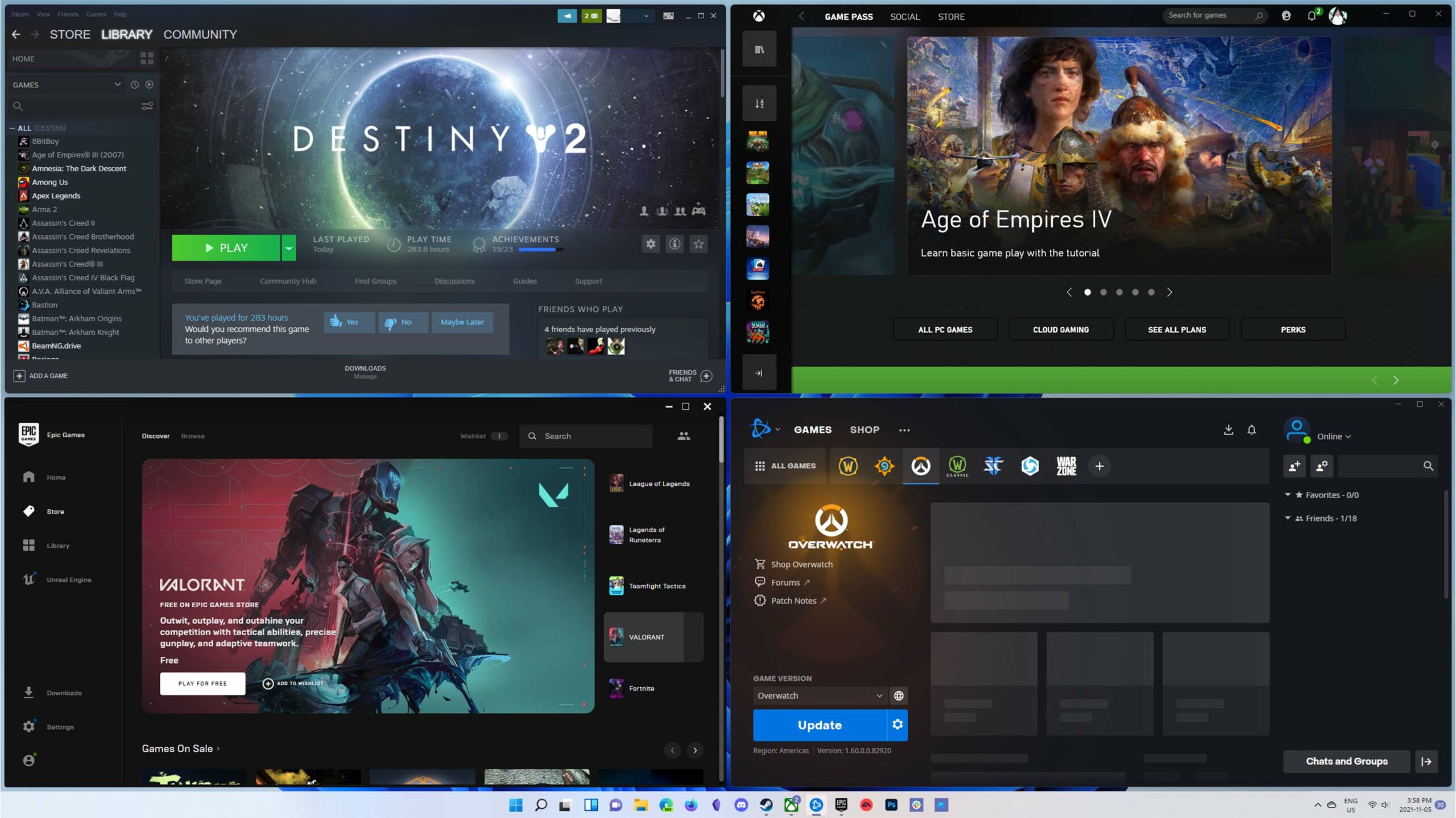 One of the main benefits of PC gaming compared to consoles is expanded choice for where you get your games. There are a ton of digital stores for purchasing games, with many also doubling as game launchers, social platforms and more.

Anyone who’s been in the PC gaming space for a while will likely be familiar with most of these digital stores. However, for those new to PC gaming (or for anyone out there buying gifts for a PC gamer this holiday season), it might be helpful to know some of these different platforms.

This list will focus on some of the more well-known options out there, but if there are any smaller ‘hidden gems’ we haven’t mentioned, feel free to leave a comment below sharing some of your favourite game stores too. 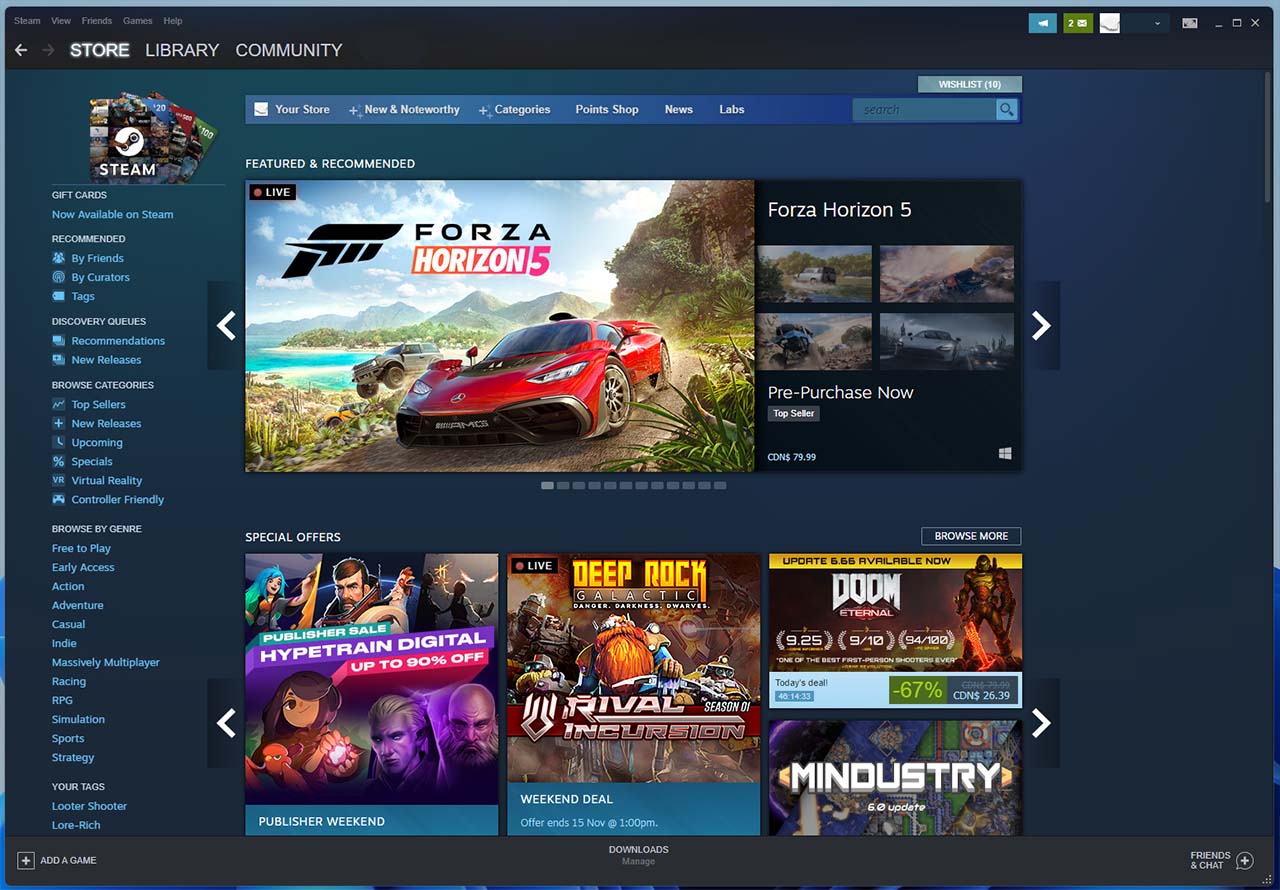 Valve’s Steam platform is one of the largest and perhaps most well-known platforms for PC gaming. The platform offers a massive store (with a penchant for sales), a game library for accessing your titles, chat and other social services and a lot more. If you want to play a game on PC, there’s a very good chance you’ll be able to do it with Steam.

Steam can also act as a game launcher for non-Steam titles, has a ‘Big Picture’ mode for a more console-like experience and interestingly is also involved in a massive effort to make more PC games playable on Linux. Oh, and there’s the Steamdeck portable PC on the way too. 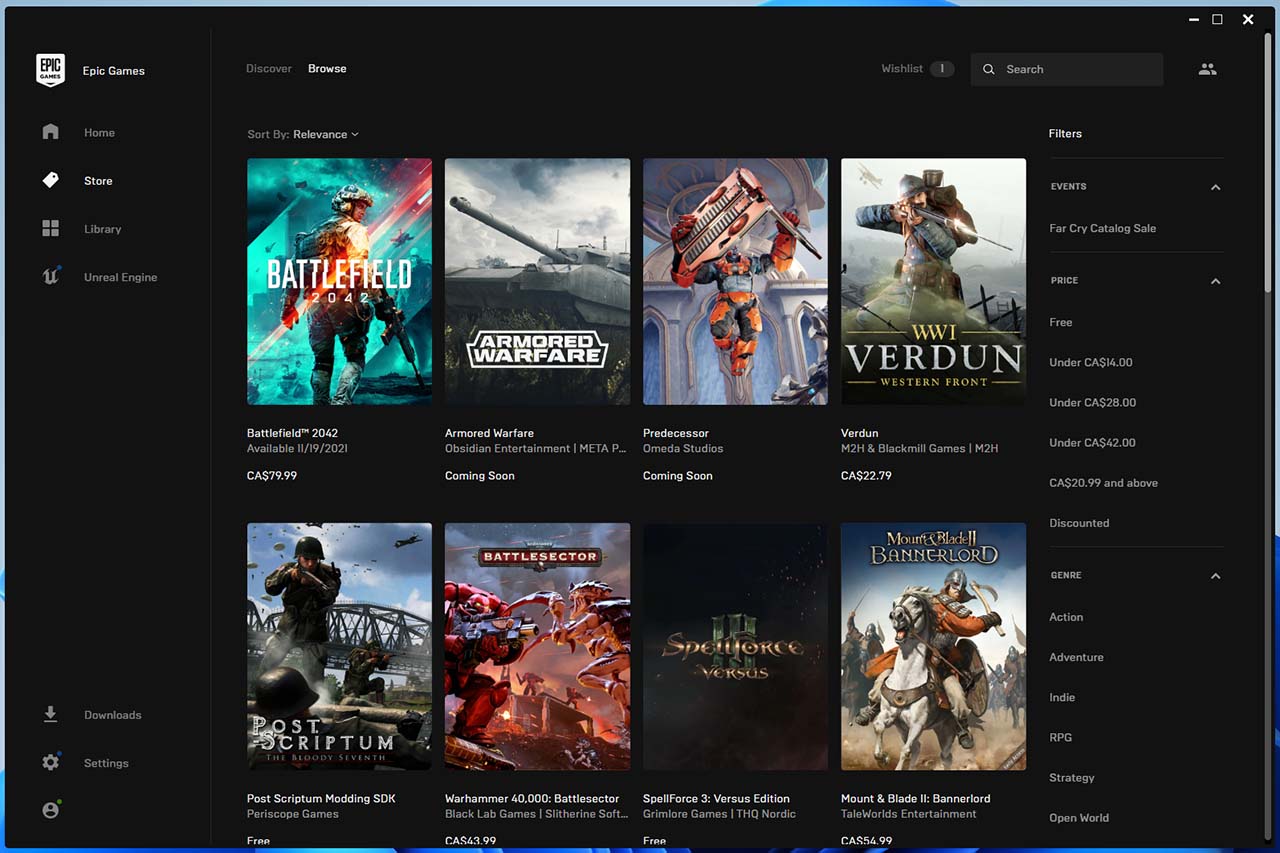 Best known for the wildly popular Fortnite and the Unreal Engine, Epic Games also has a store/game launcher. Epic has tried to position the Epic Games Store (EGS) as a major competitor to Steam. Although some in the PC gaming community dislike EGS, and the client isn’t quite as robust as Steam in terms of social offerings and quality-of-life features, it’s still a pretty good alternative to Steam.

Perhaps one of the biggest benefits of using EGS is the weekly rotation of free games — not just free-to-play, but free-to-keep. That makes the store a great option for people starting out with PC games as it’s a great way to build up your library and try out some older titles without spending a bunch of money or waiting for a sale. EGS also recently became the home for several of Riot’s games (like League of Legends) which traditionally have only been available through Riot’s game launcher.

You can learn more about EGS here.

Although these are effectively different platforms, I’m lumping them together since they both come from Microsoft. Xbox Game Pass is another excellent option for someone new to the PC platform as it gives you access to a ton of games for a monthly subscription. Plus, you can get discounts on some games sold via the Xbox Store — for example, if a game you like rotates out of the Game Pass library, you can buy it at a reduced price to keep playing.

Microsoft has been putting a lot of effort into gaming on both its Xbox consoles and on Windows PCs, and while the Xbox app on PC has its issues, it’s also improved a lot over the last year. Whether you buy your games from the Microsoft Store, through the Xbox app or subscribe to Game Pass, it’s a great little game launcher (especially if you have friends that play on Xbox).

Oh, it’s also nice if you’re interested in testing Microsoft’s xCloud game streaming service. And, as an added benefit, if you play a lot of EA games you can gain access to some titles through EA Play as part of Game Pass (more on that below). 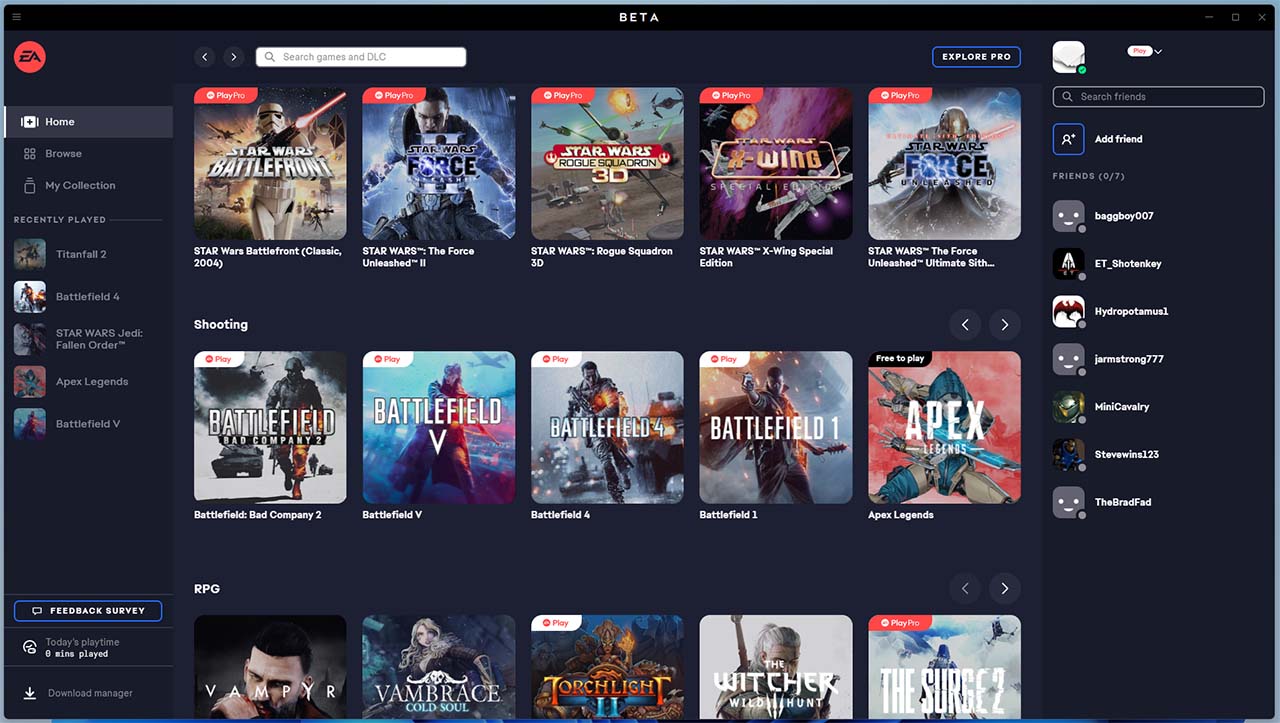 Electronic Arts currently has two PC games platforms — EA app and Origin. My understanding is that EA app will eventually replace Origin, but the software is still in beta at the moment.

Aside from a new design and some other minor changes, there’s not a whole lot different between the two platforms. If you’re okay with running a beta, I’d say go for the EA app to save yourself the hassle of switching if/when Origin bites the dust.

Anyway, the main reason to download Origin was, for a while, that it was the only option for getting EA titles on PC. However, EA has since started offering games on other platforms (like Steam and the EGS, although you still need to use Origin even if you buy the games from other platforms). It’s also worth noting that if you want to connect your Xbox Game Pass Ultimate subscription to gain the EA Play benefits, you’ll need to use the new EA app.

Speaking of EA Play, it’s a subscription service specifically for EA games. It comes in two flavours — Play for $4.99/mo or $29.99/year or Play Pro for $19.99/mo or $129.99/year. Play lets you access new EA releases up to 10 days before launch for up to 10 hours total playtime, as well as up to 10 hours of playtime on all of EA’s latest games. Play Pro gives both those benefits without the playtime cap.

Beyond that, you also get in-game rewards, exclusive member-only content, unlimited access to a collection of premium EA games (look for the ‘Play’ and ‘Play Pro’ logos on games) and a 10 percent discount for purchases on Origin and EA app. 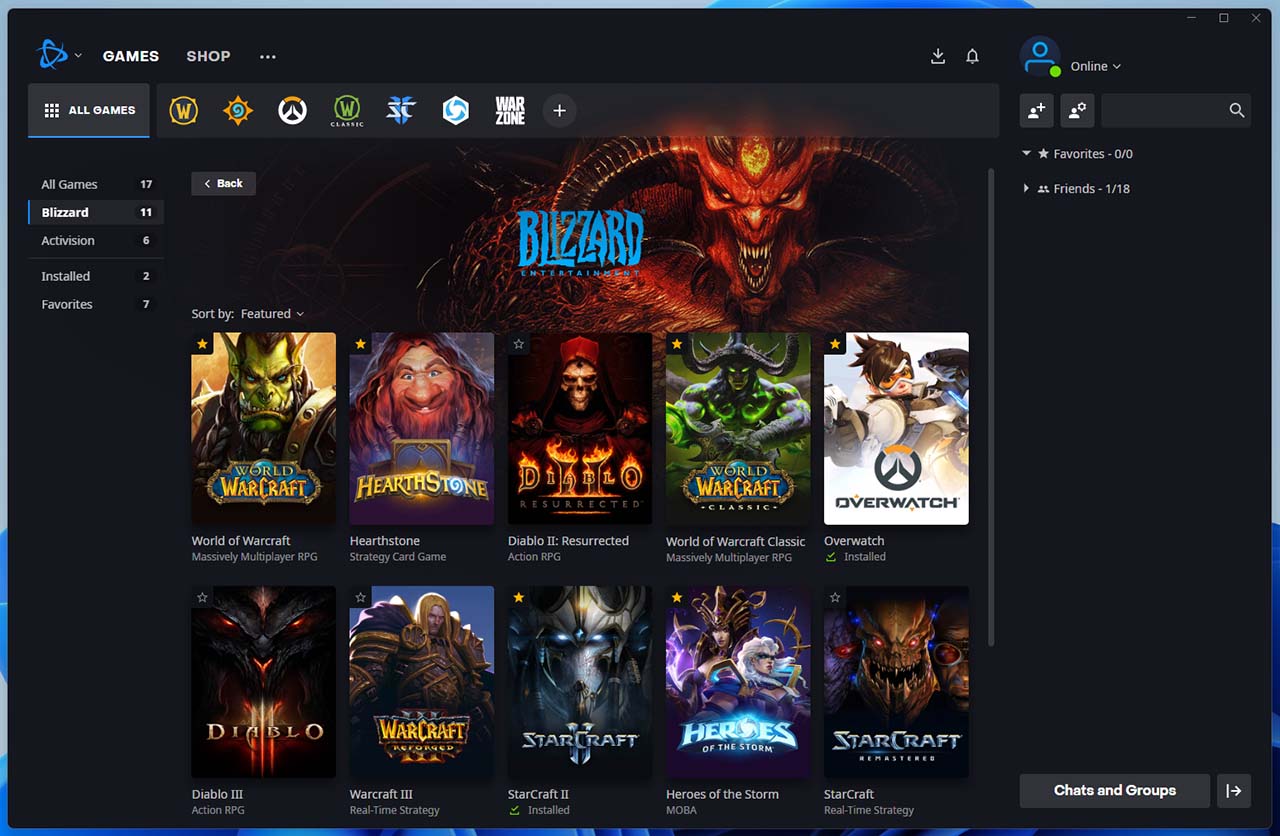 The Battle.net app will be your main destination for Blizzard and Activision games. This has basically always been the case for Blizzard games, while it’s been more recent that Activision has pushed some of its biggest titles to the platform rather than on competing services like Steam.

If you’re not interested in any of Blizzard’s titles, Call of Duty or Crash Bandicoot 4, you can totally skip Battle.net — otherwise, it’s a must-have. Once upon a time, Bungie’s Destiny 2 was exclusively on Battle.net but after Bungie split with Activision, Destiny 2 moved to Steam (it’s also available in the Xbox app).

You can learn more about Battle.net here. 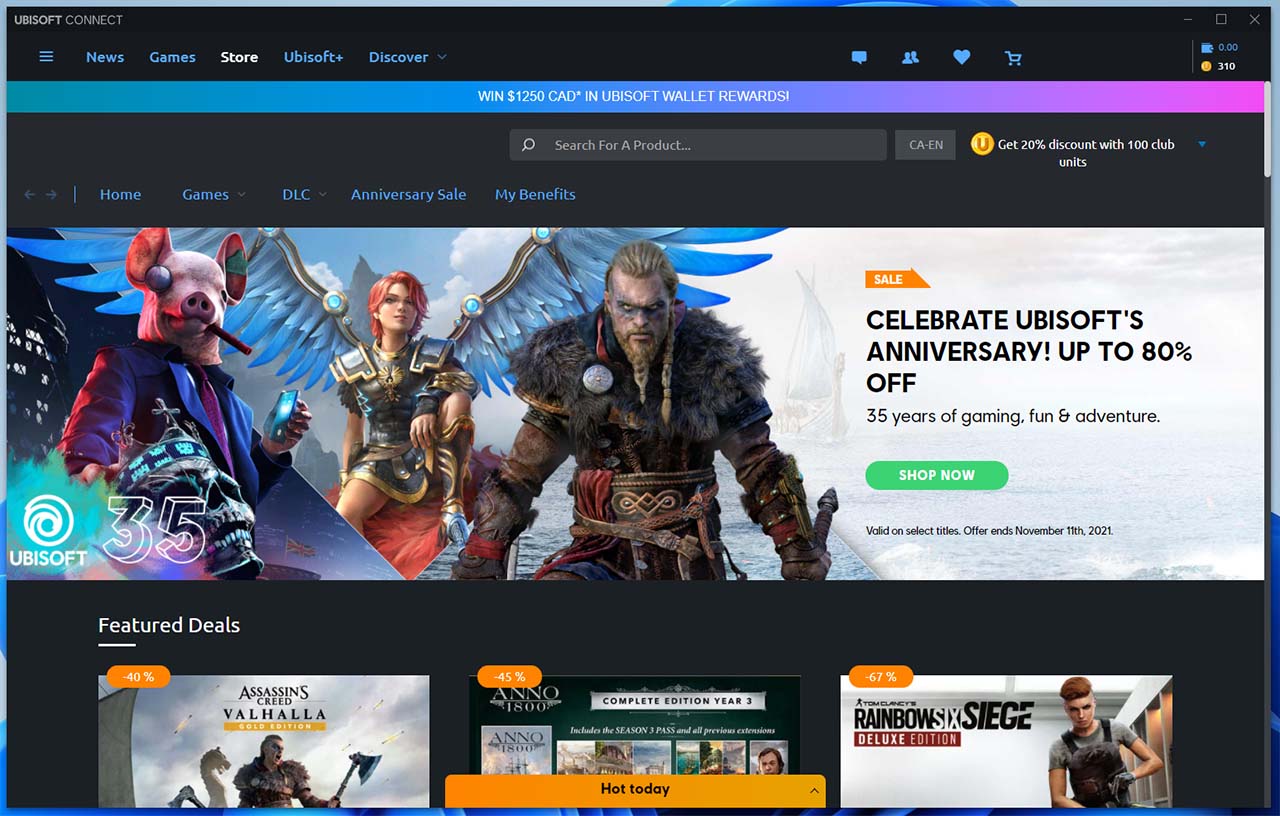 Like some of the other niche game stores/launchers, Ubisoft Connect (formerly UPlay) is completely unnecessary unless you play a lot of Ubisoft games. And while Ubisoft games are available on other platforms like Steam, almost all of them require you also download Ubisoft Connect, even if you never use it.

For my part, I basically only ever interact with Ubisoft Connect when I launch a Ubisoft game from another platform and a pop-up informs me Connect needs an update before I can play. Once the update’s done, I banish Connect back to my list of installed apps and don’t think about it again.

That said, for any big Ubisoft fans, there’s likely some benefit to using Connect. For example, if you buy Ubisoft games through Connect you can collect ‘club units’ for discounts and there’s a whole ‘Ubisoft+’ subscription that lets you play “new releases on day one.” Ubisoft+ costs $19.99/mo in Canada.

You can learn more about Ubisoft Connect here. 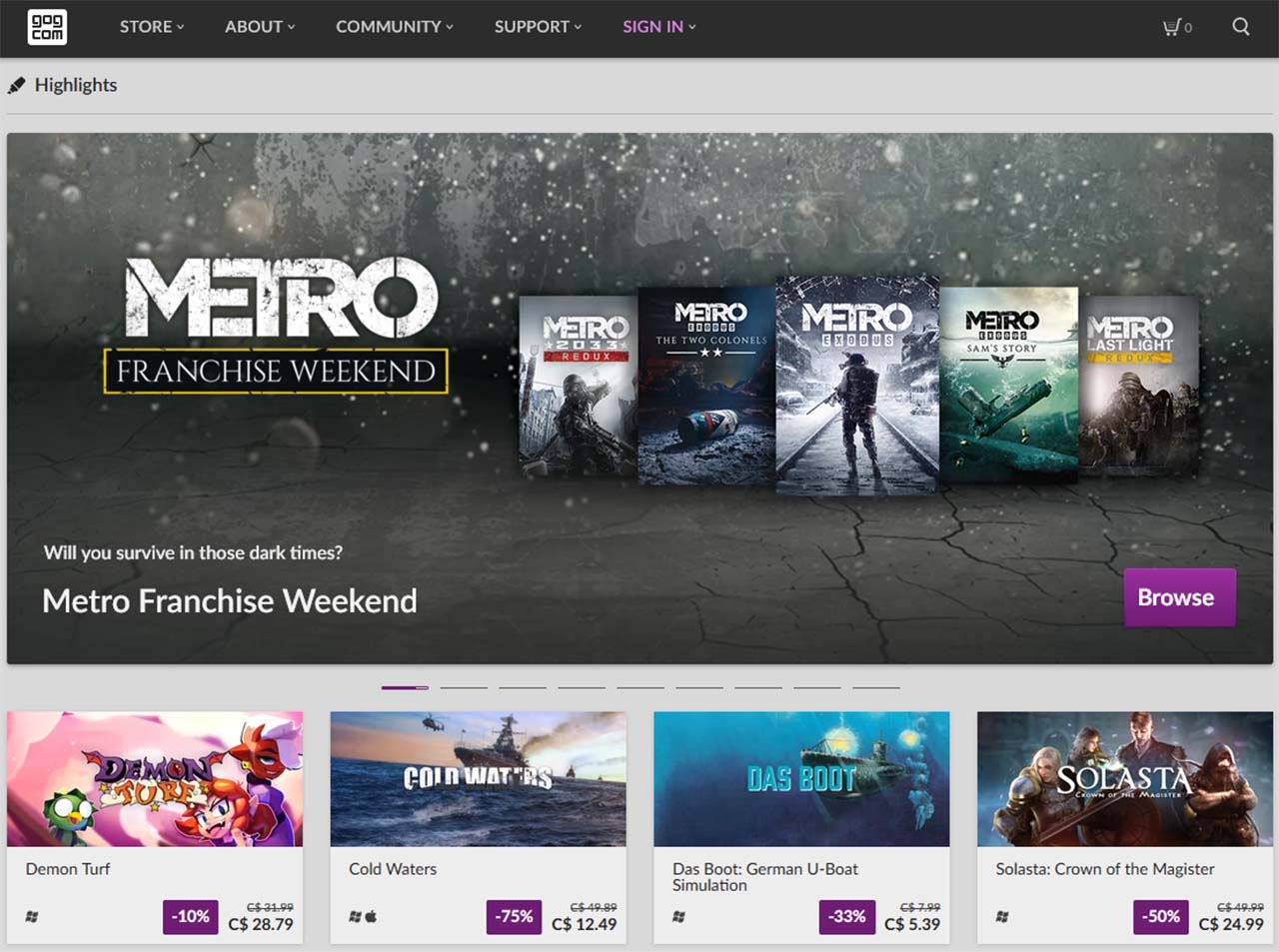 GOG is a game store from CD Projekt, the company behind popular games like The Witcher 3 and Cyberpunk 2077. GOG positions itself as a “DRM-free home for a curated selection of games.” There are some decent titles on GOG and frequent sales. The DRM-free part is a nice bonus too.

There’s also the GOG Galaxy 2.0 app, which looks to be a game launcher that pulls from several sources (Xbox, Epic, etc), which could be a helpful tool in managing your game library if you have a large collection across different apps and services.

You can learn more about GOG here and the Galaxy 2.0 app here. 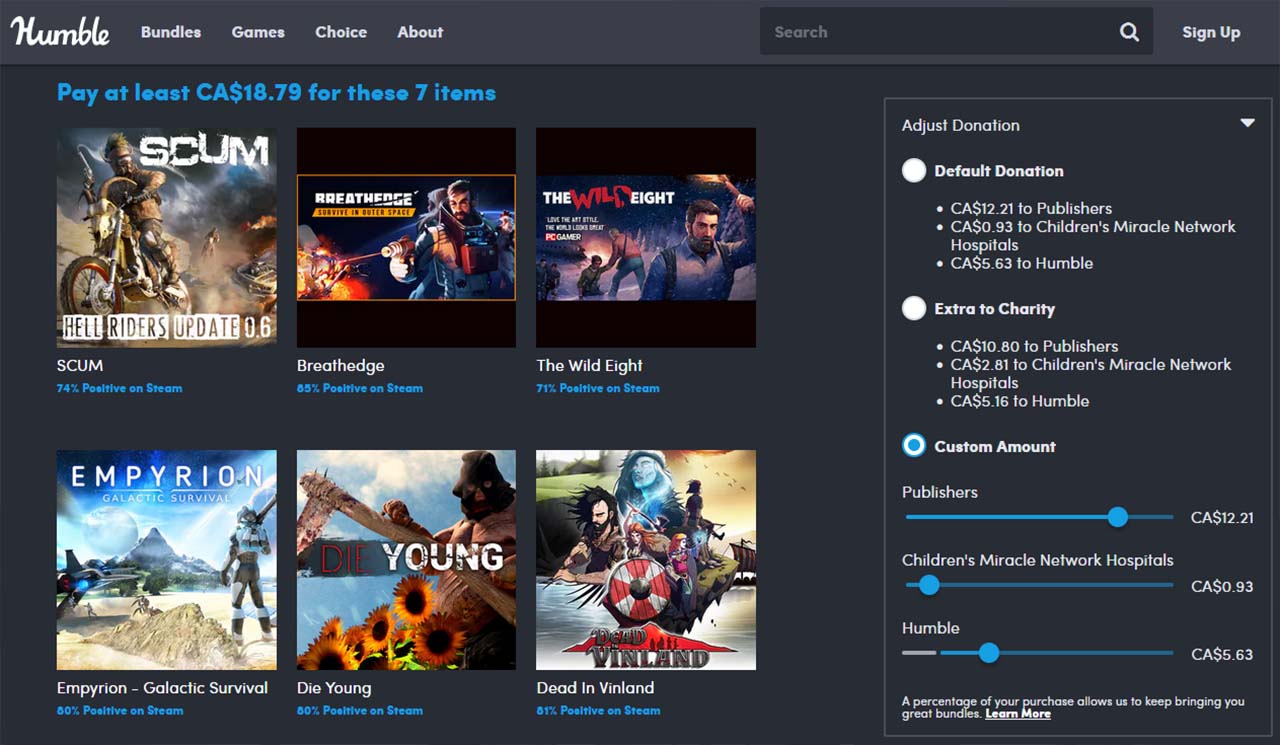 While a potentially lesser-known option, Humble Bundle is a pretty great PC gaming store to keep an eye on. The unique thing with Humble is that it offers limited-time bundles of games (there are software and book bundles) with a focus on charity.

Typically how it works is there will be a bundle of games, usually with a theme (such as a type of game or games from a specific publisher). Customers can “pay what they want” for the bundles to get the games, with many bundles offering tiers (for example, pay at least $2 to get these games). You can also adjust how much of your money goes to the charity, Humble Bundle and game publishers, which is neat.

While not every bundle is a winner, I’ve definitely seen some incredible deals in my time (I once scored a bundle with Civilizations III, IV and V, including DLCs and a host of other Sid Meier titles for less than the cost of just the base Civ V game).

Humble also has a digital games store and a monthly subscription called ‘Humble Choice’ that gives you new games every month.

You can check out Humble here.

Finally, to cap things off are a few other PC game stores worth mentioning. There’s Google Stadia (although I’m not sure that really counts) and ‘itch.io‘ for indie games. Bethesda has its own online store and game launcher. There are also a few ‘key resellers’ (most digital games rely on keys that you enter in Steam or other stores to unlock the title). Key resellers can be shady, but if you’re comfortable with the risk can be a great way to pick up games at a discount. Speaking of which, you can often buy digital game keys from Amazon too.