I have been waiting for this to happen since 2019.

Twitter has finally, finally added support for Android’s system dark mode. That means I don’t have to manually switch between the app’s built-in light, ‘dim’ and dark options anymore. This is truly a ✨blessed✨ day.

For a bit of context, back in 2019, Apple and Google added official dark modes to their respective operating systems. These dark modes were, effectively, just a toggle that changed user interface (UI) elements from light colours (like bright white) to dark colours (like grey, dark blue or black). Both companies hyped up the toggle as a significant new feature, despite embarrassingly few apps supporting the toggle at launch.

Twitter users with iPhones didn’t have to worry about this particular problem for long. 9to5Mac reported that Twitter rolled out support for the iOS 13 system dark mode toggle on September 17th, 2019. (I think it may have come to Canadian Twitter users later, because I wrote on the 25th of that month that Twitter still didn’t support the dark mode toggle). Twitter’s support was a new ‘Use device settings’ toggle that told the app to follow iOS.

Android users, however, just started to get that toggle on October 14th, 2021. Not everyone has it yet, however, but it appears to be rolling out quickly. 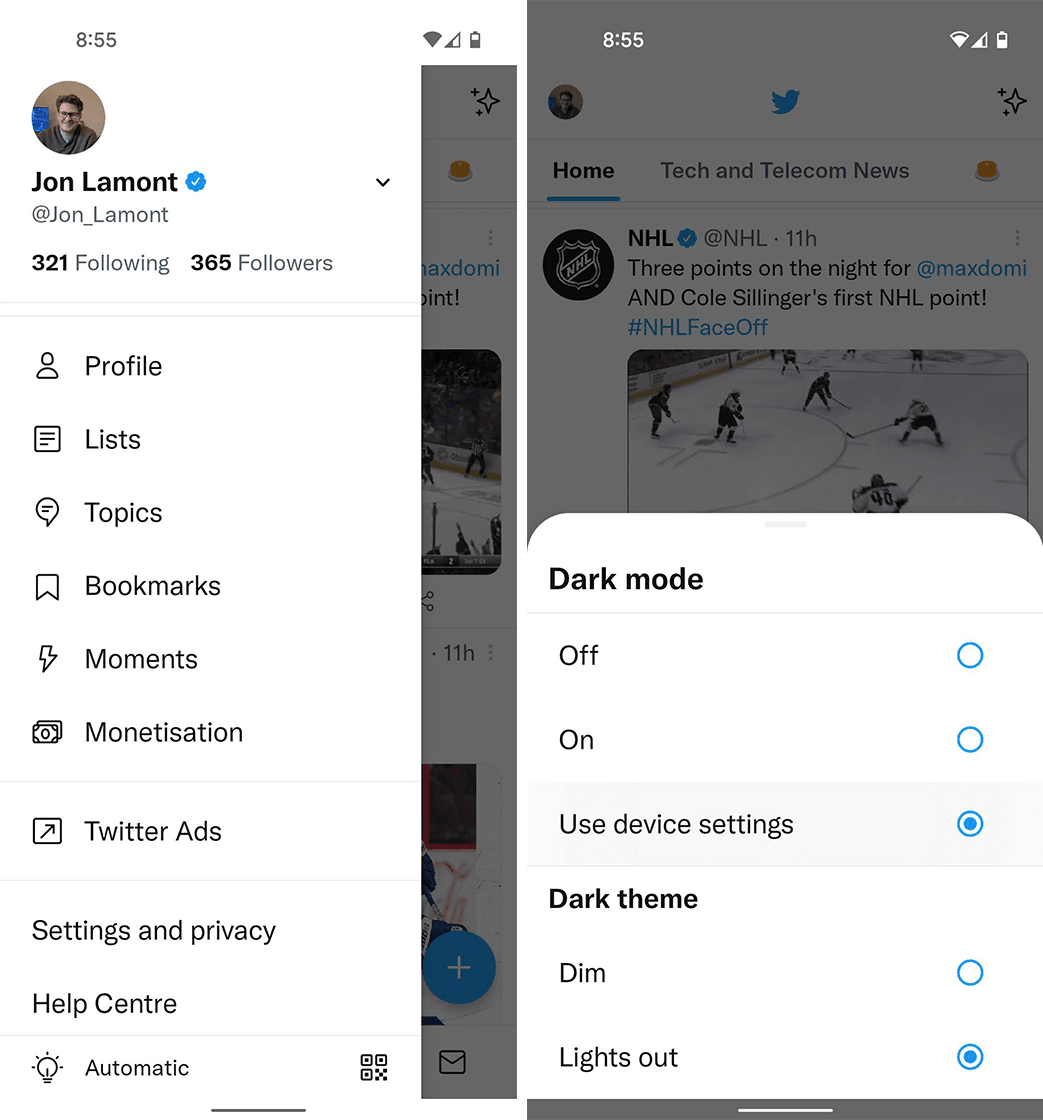 To access it, open Twitter on your Android phone, tap your profile picture in the top-left corner, then tap the lightbulb icon in the bottom-left corner. A menu will slide up from the bottom of the screen with options to turn dark mode ‘Off,’ ‘On,’ or ‘Use device settings.’ Twitter users can still select the ‘Dim’ blue or ‘Lights out’ black dark theme. The option to have Twitter follow sunset/sunrise is gone, which is fine by me since it didn’t work on any phone that tried it on.

Finally, I’d be remiss if I didn’t point out that Twitter could do a lot more to improve usability and accessibility on its platform. As ecstatic as I am about support for system dark mode, Twitter has glaring accessibility issues that have only gotten worse with the platform’s recent changes to the font and other elements. And don’t get me started on the widespread harassment and other problems.

But, at least now Twitter will match my phone theme.