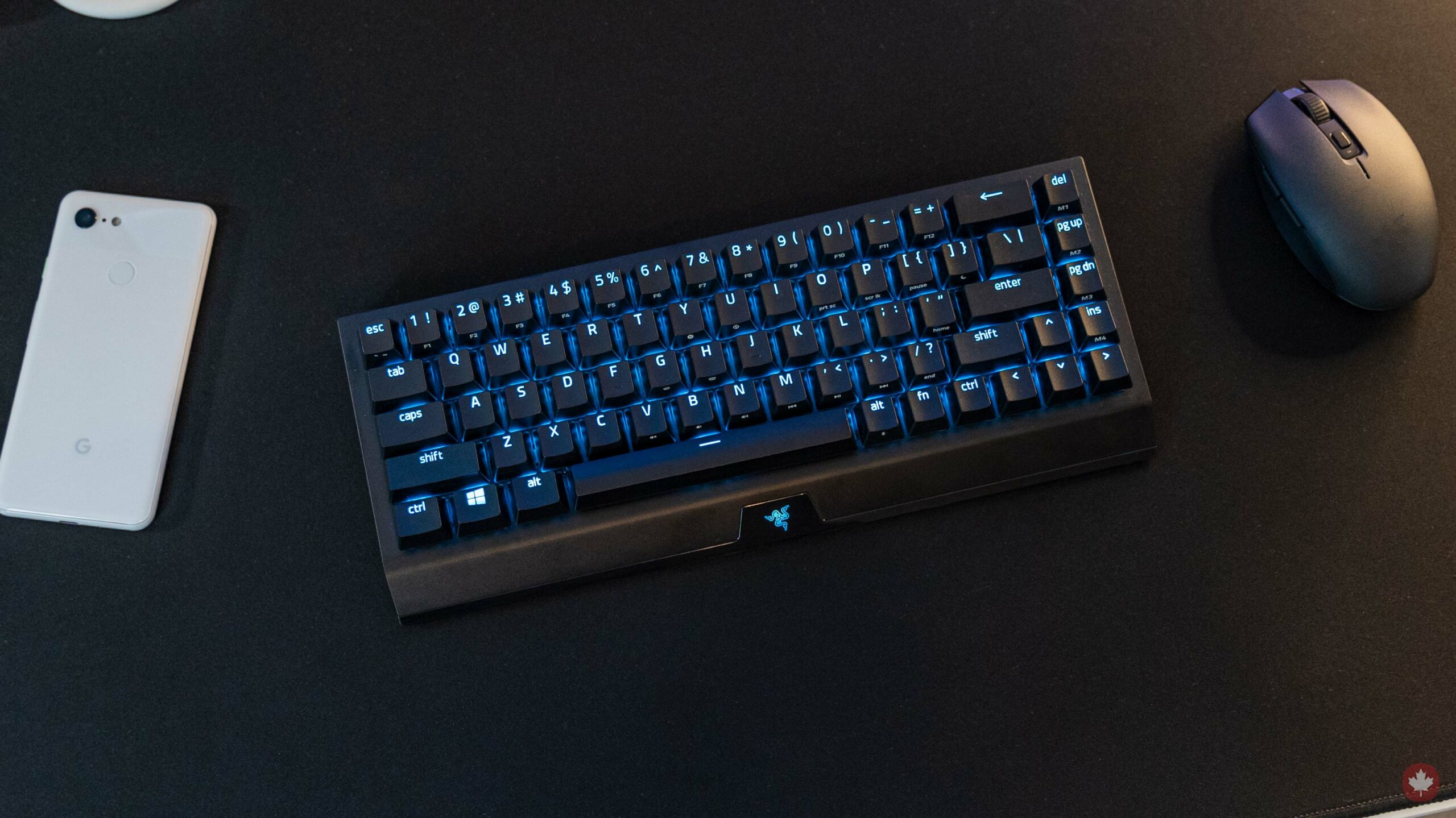 It took a while for me to finally get on the mechanical keyboard train, but once I got on board, I knew I never wanted to get off. Some people don’t like them, others don’t care enough to notice a difference, but as someone who spends far too much time typing (it’s literally my job), having a mechanical keyboard is incredible.

I would consider myself a mechanical keyboard fan, but I’m far from an enthusiast. The folks hanging out in places like Reddit’s ‘r/MechanicalKeyboards’ are the true enthusiasts — they spend an absurd amount of money and time building custom mechanical keyboards with stunning designs. As much as I admire and respect what they do, I just don’t have the time (or patience) to build my own keyboards.

So, like some pleb, I buy prebuilt mech boards. My first was a Razer BlackWidow Ultimate that I picked up in 2016, largely because I was a broke student and I could get one for cheap with a staff discount while working at Best Buy. Although I have my issues with it, the BlackWidow Ultimate was an excellent board for the four years I used it 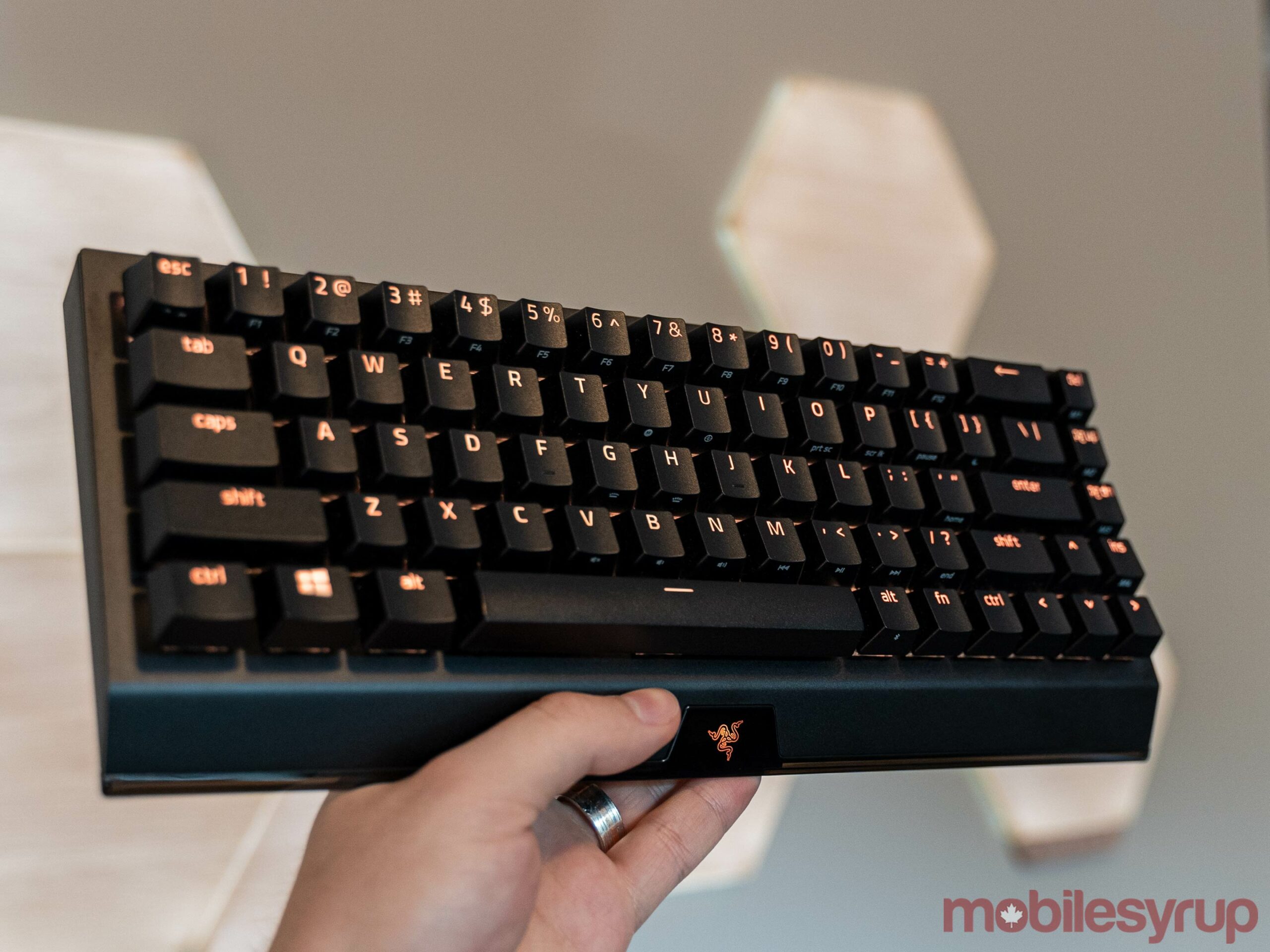 I eventually swapped it for a prebuilt tenkeyless (TKL) board from a company called Durgod a few months into the pandemic since some keys on the Razer board started double or triple clicking and, when you spend all day typing, having to constantly fix words that looked like thissss is a pain.

Anyway, when Razer launched its new BlackWidow V3 Mini Hyperspeed, I jumped at the chance to try it out. A 65 percent mechanical keyboard, and the same model as my first board? It’s a dream come true!

However, I’ve also learned a lot since my first mechanical keyboard and, while I really like the V3 Mini, I’m not sure that it’s the right option for me. Plus, its high cost may make it a tough sell to others. 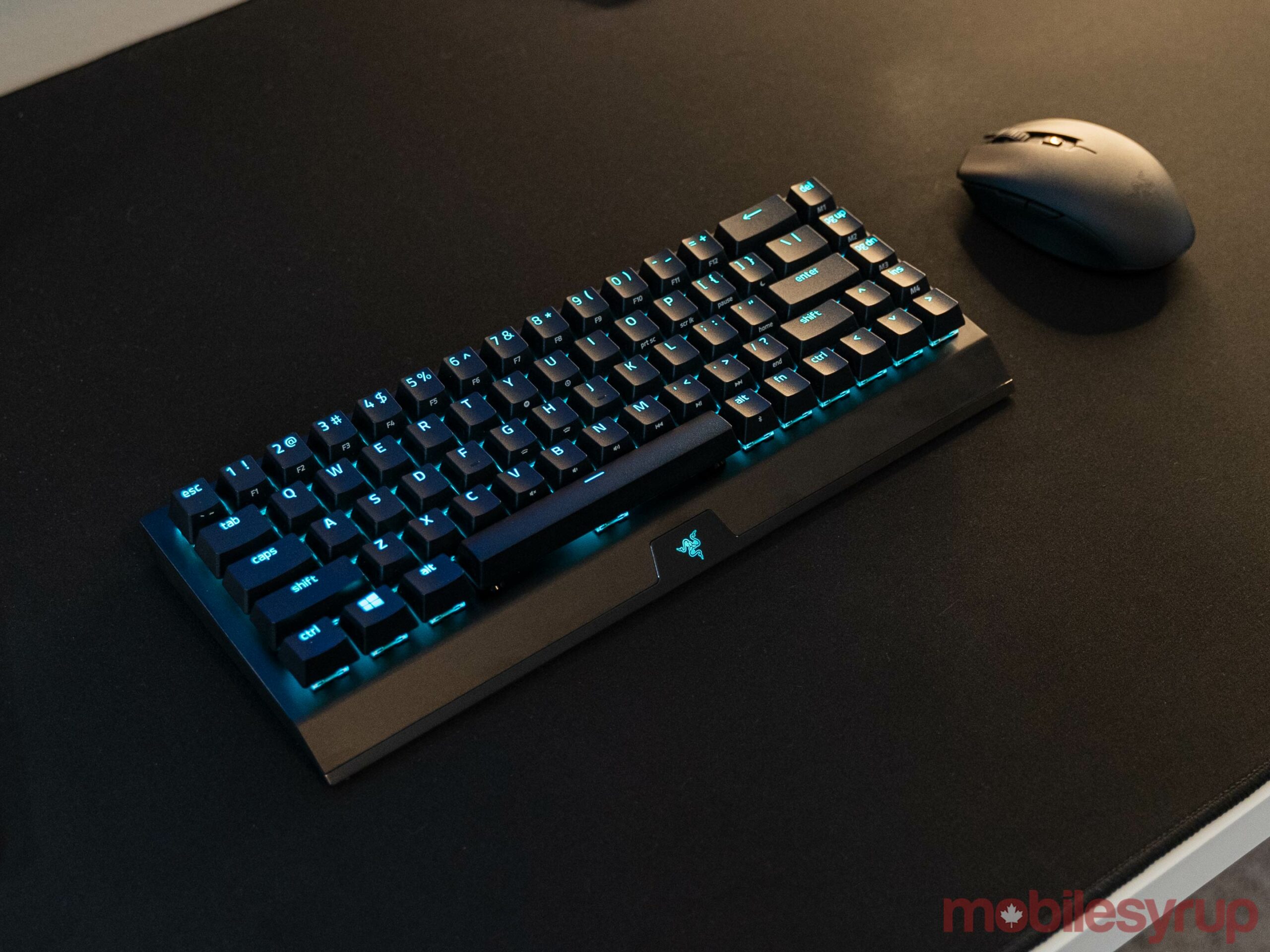 To kick things off, the switches on the V3 Mini sound and feel incredible. For me, one of the best aspects of a mechanical board are its tactile feedback when typing and, by extension, the sound. I really like it, although it can be annoying for others if you share an office or workspace (as my wife can attest).

Generally, the V3 Mini did excellent here, with a sharper ‘click’ than my Durgod board sporting Cherry MX Blue switches. The V3 Mini I tested featured Razer’s Green switches, which are comparable but slightly different. The V3 Mini also ships with Razer Yellow switches, comparable to Cherry MX Reds. In short, Razer Greens/Cherry Blues are typically preferred by typists thanks to the tactile click and the audible sound, since it lets you know when the switch has “activated” and registered the input.

Razer Yellows/Cherry Reds, on the other hand, have less tactile feedback and activate sooner, making them ideal for gaming. In short, if you’re in the market for the V3 Mini primarily for gaming, you may prefer the Yellow switches, but typists should get the Greens (you can hear what they sound like below).

Obviously, you can use both switches for gaming and typing (I’ve gamed on Greens and Cherry Blues for years) but it is really subjective. As an aside, I’d typically recommend going to a retail store and testing the feel of switches on display boards before making a purchase. However, that’s a lot more difficult with the ongoing pandemic.

My only real gripes about the V3 Mini with Green switches are that the spacebar sounds completely different from all the other switches and sometimes the left shift key would catch when pressed. 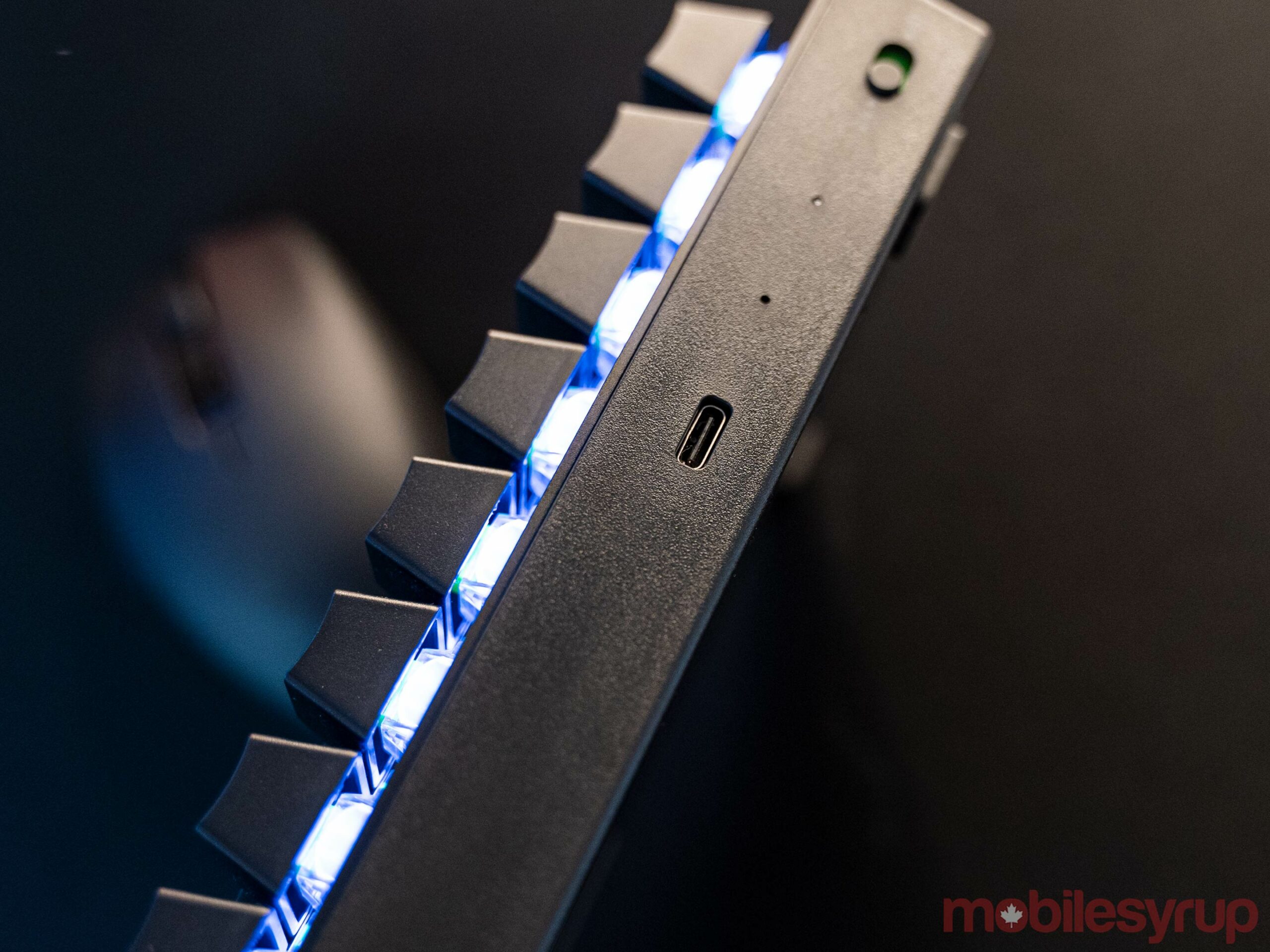 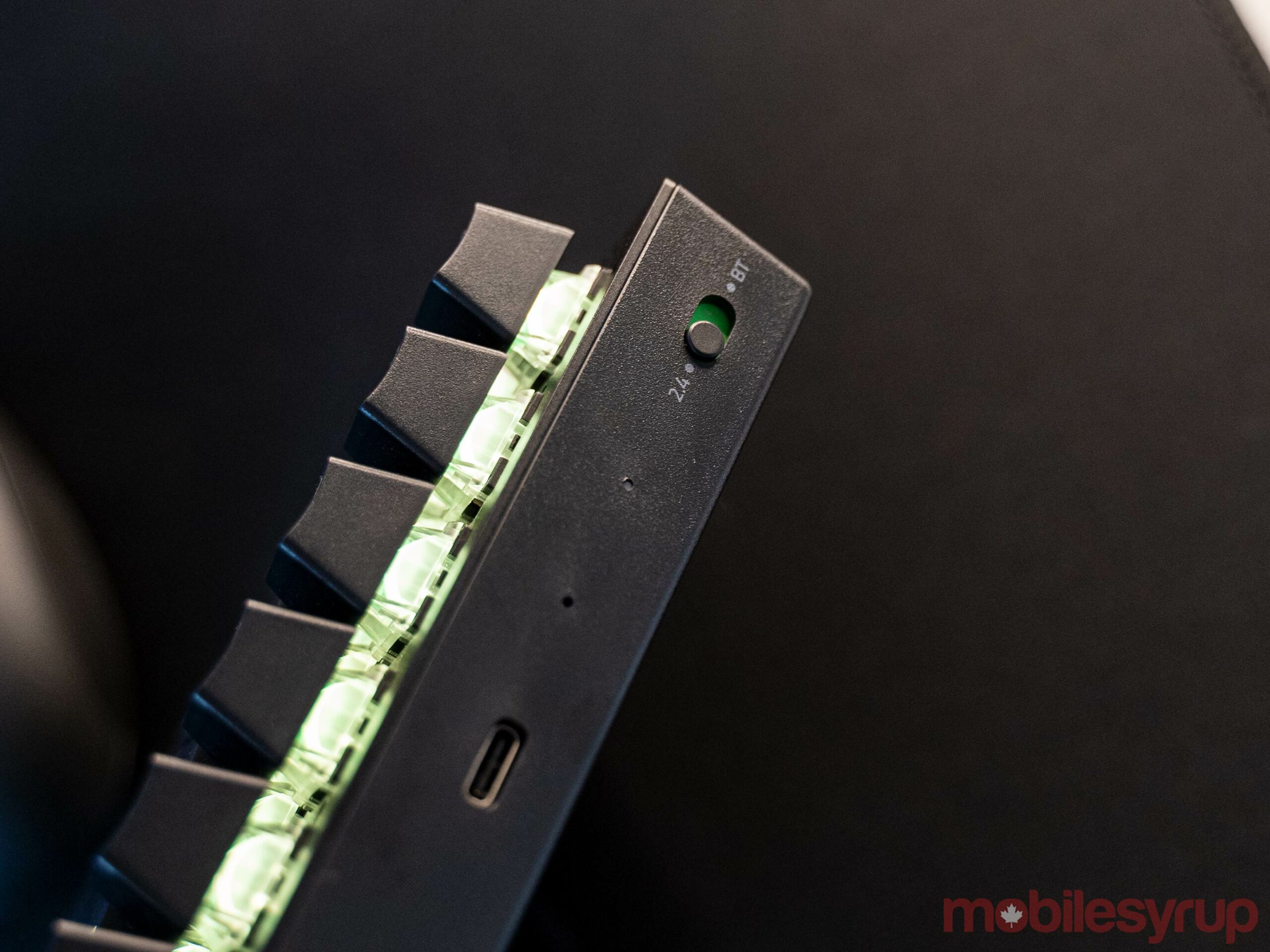 The spacebar sound isn’t a huge deal — I actually kind of liked it, as the spacebar added a loud clack! that punctuated the end of each word I typed. That said, if you want your keyboard to offer a consistent sound profile, that may prove annoying.

The catching key was a much bigger issue, particularly when gaming. I suspect the issue relates to the stabilizer on the left shift key (wider keys like shift and spacebar often have stabilizers to support the keycap and only one mechanical switch in the centre to register keypresses). The issue wasn’t present on any of the other wide keys, so it may just be a broken stabilizer and not indicative of a larger issue. Still, it’s frustrating to be playing a game and have the shift key catch. 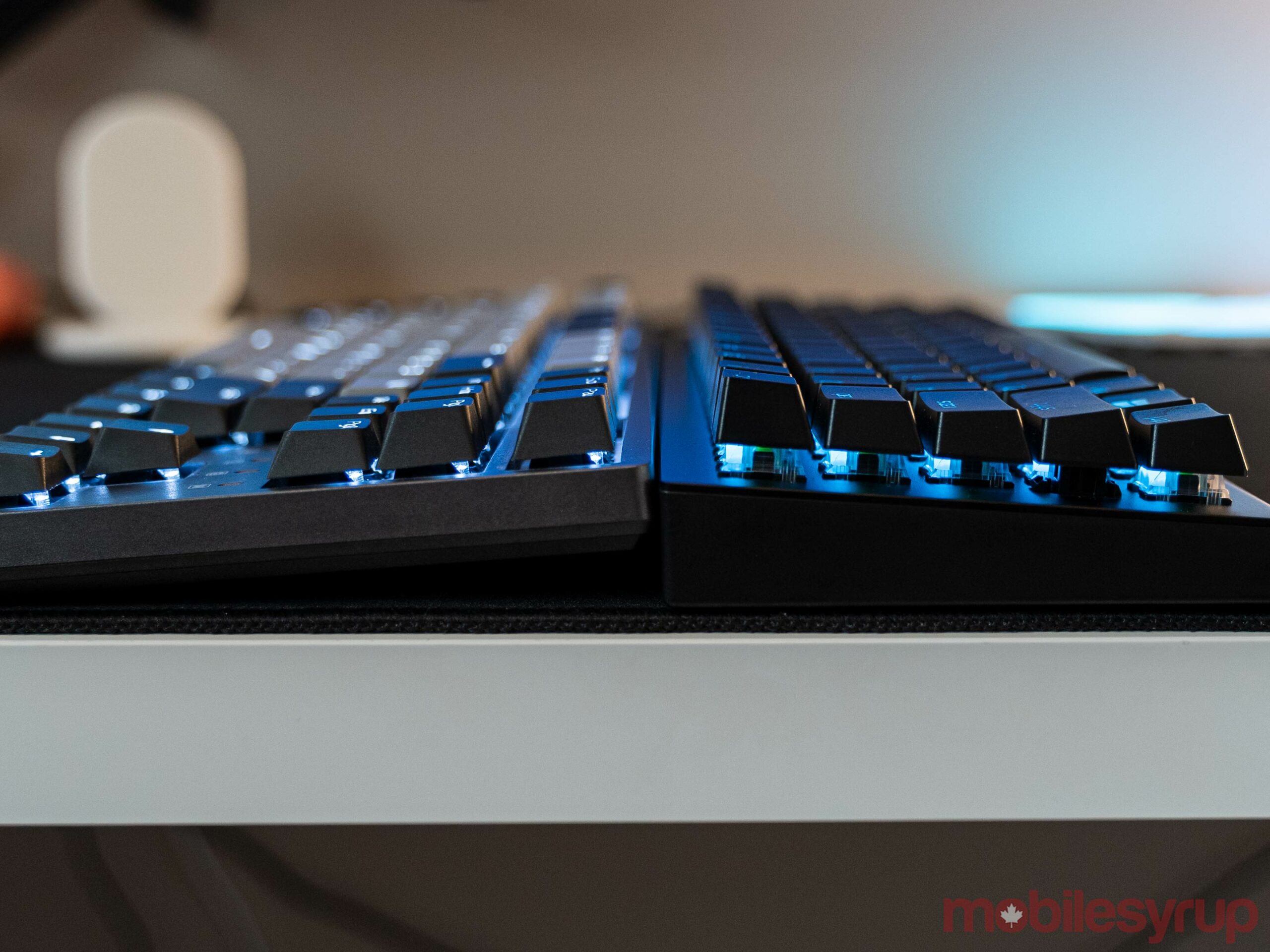 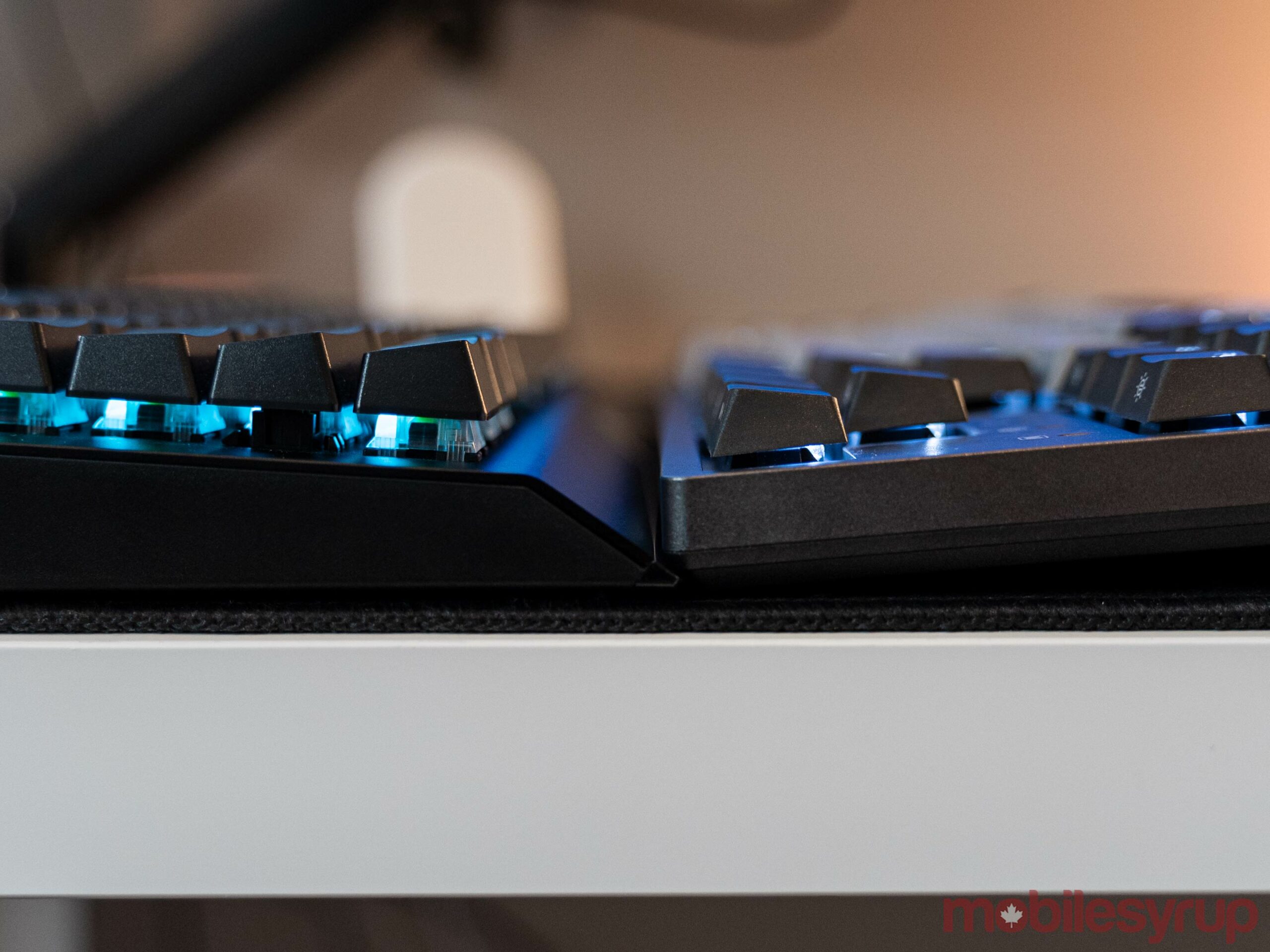 Aside from those minor issues, I thoroughly enjoyed typing on the V3 Mini. That said, it wasn’t a great ergonomic fit for my desk. To be fair, my desk probably isn’t the best for ergonomics anyway, but that’s beside the point. My issue with the V3 Mini was that it’s taller than my Durgod board.

Practically, that meant I had to bend my wrists more when using the V3 Mini, which wasn’t comfortable. Of course, it’s an issue that entirely revolves around your desk setup. Someone with a keyboard drawer that lets them place their board lower than their desk likely won’t encounter the same height issue that I did. I’m not knocking Razer for the tall board, but it’s worth keeping in mind for anyone thinking about buying the V3 Mini.

Speaking of size, it’s also worth mentioning that some people will struggle with a 65 percent board. When talking about keyboards, a percentage refers to the size compared to a full-size, or 100 percent, keyboard. 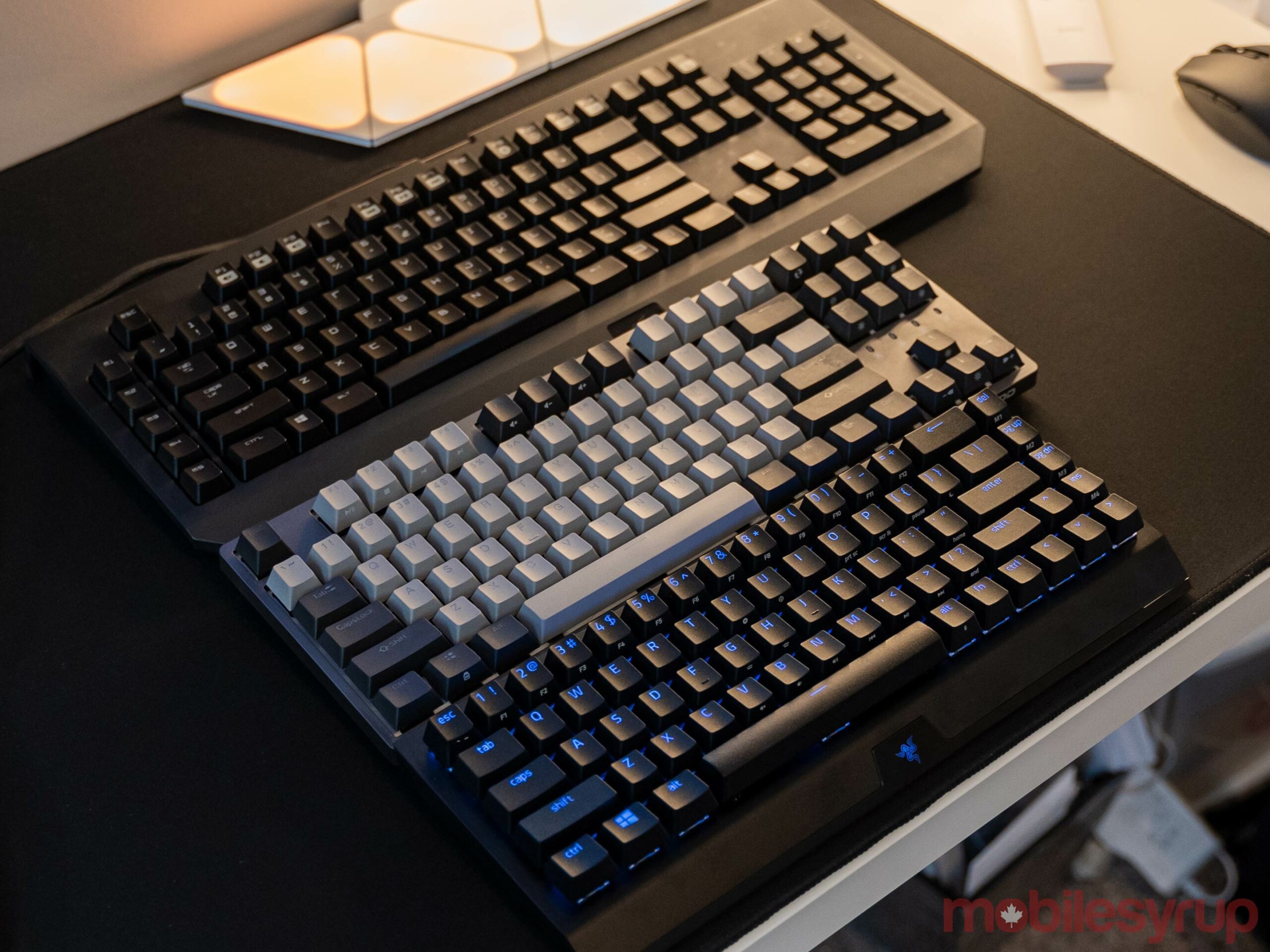 65 percent keyboards typically lack what some would consider ‘standard’ keys, like the function row. Most 65 percent boards, including the V3 Mini, solve this by adding macro layers to access these missing keys. With the V3 Mini, for example, I can press the ‘Fn’ key to turn the number row along the top of the board into the function keys (F1, F2, etc).

If you’re someone who relies on the function row or other keys a lot, the V3 Mini likely won’t be for you. It didn’t really bother me, although I use the Print Screen button religiously, and having to tap ‘Fn’ first to access the button quickly got on my nerves.

“While I wouldn’t classify Razer’s V3 Mini as the best when it comes to price, it is much more accessible for the average person.”

If you’re not familiar with keyboard sizes, r/MechanicalKeyboards user ‘u/SuperNici’ posted this excellent (and funny) flow chart for picking the right keyboard size for you. If you’re unsure, a TKL board is always a safe bet. (TKL boards drop the Num Pad to reduce space but keep everything else. Most laptop keyboards are TKL or very similar to TKL.)

Razer is a gaming brand after all and, in typical gamer fashion, that means copious amounts of RGB lighting. Considering the V3 Mini is an otherwise boring black rectangle, I appreciated having access to various lighting and colour patterns when testing it out.

There are a ton of colour options available as well as various ‘effects’ that change how the keyboard lights up. I stuck with the standard ‘Spectrum Cycling’ that rotates through colours, but others may like the ‘Reactive’ effect that lights up keys after use, or the ‘Fire’ effect that emulated a flickering blaze by shifting through red, orange and yellow hues. 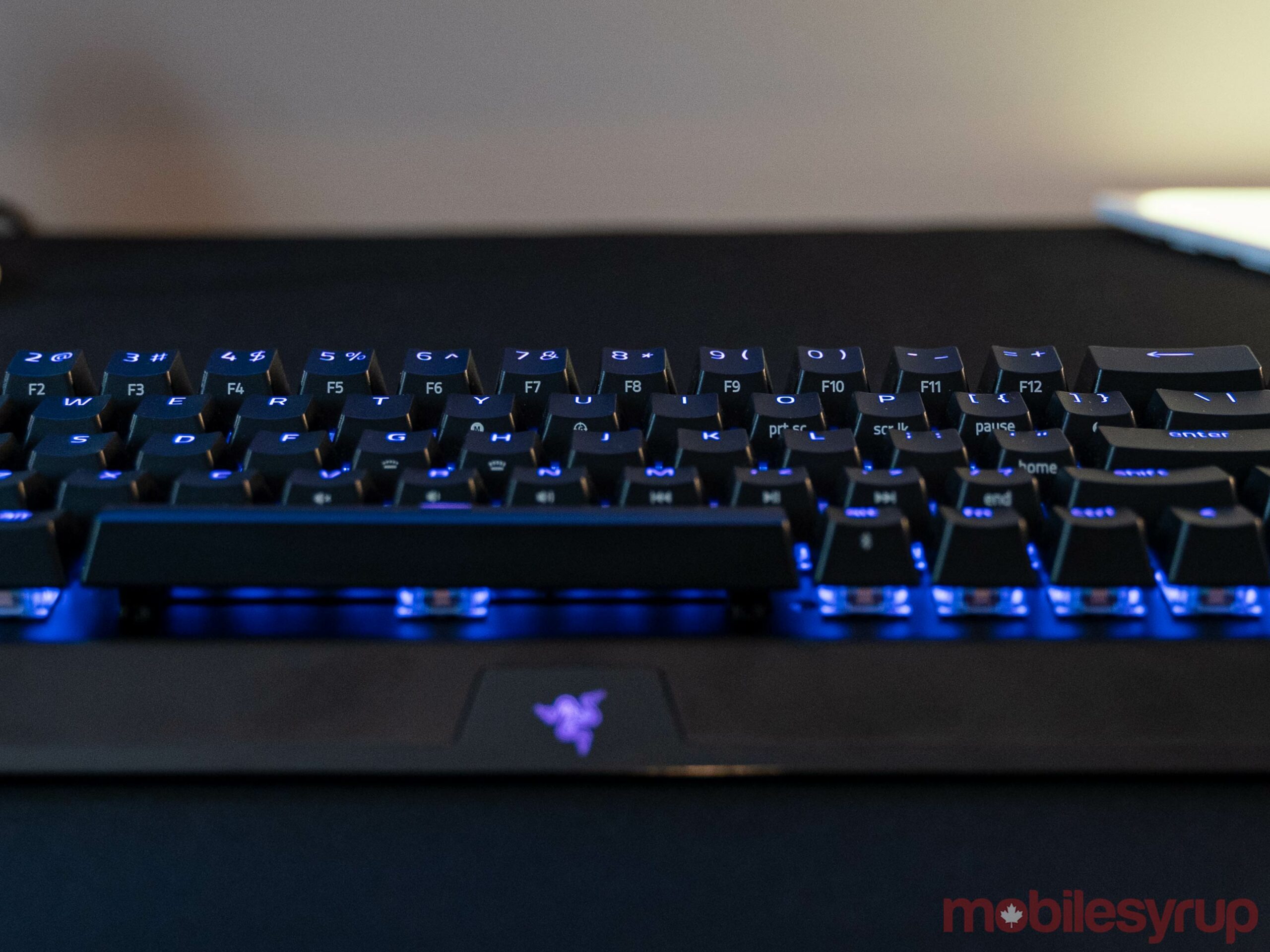 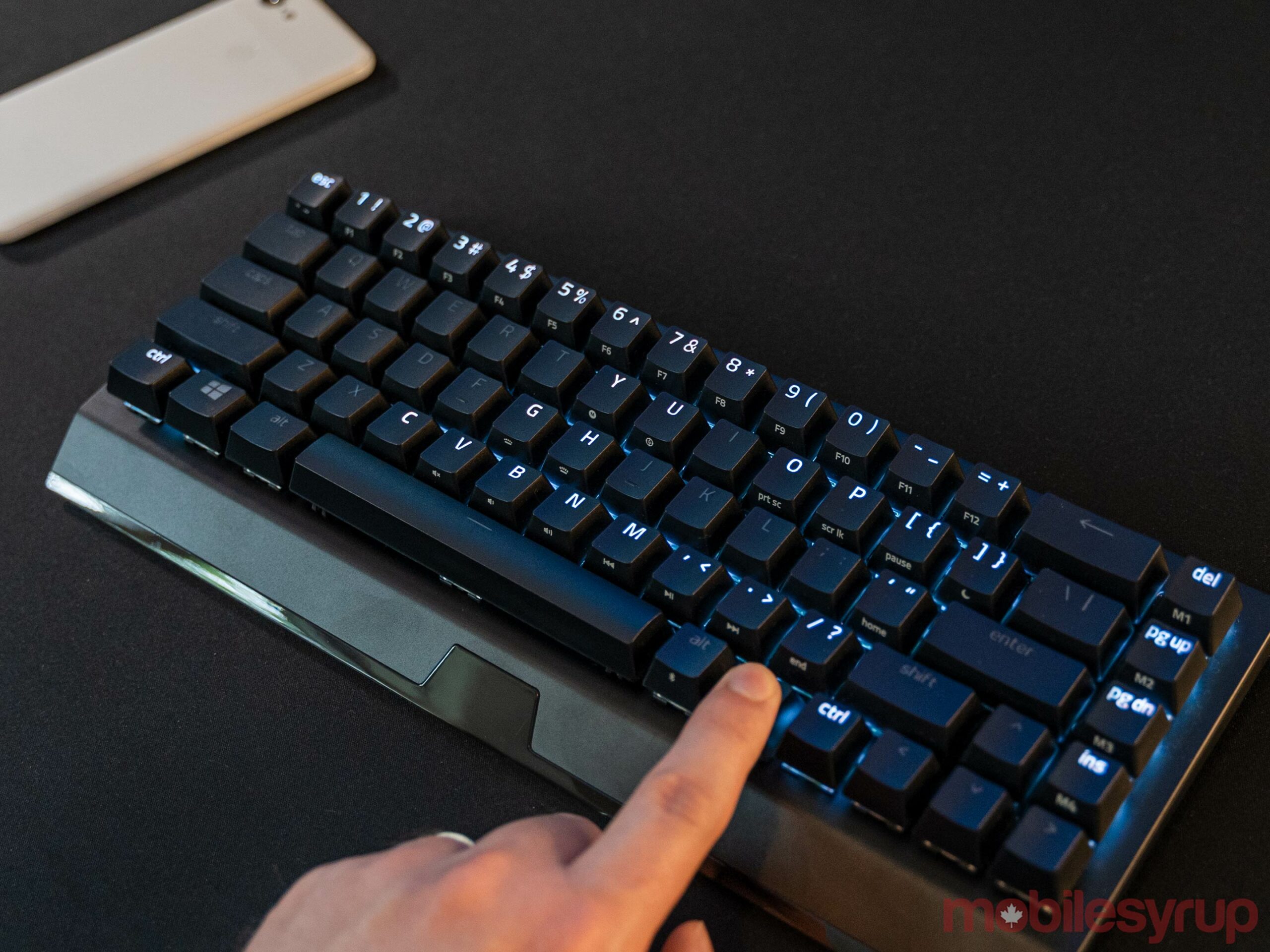 Another nice benefit to the V3 Mini was that it supports various connectivity modes. When it comes to keyboards and mice, I’m still largely a die-hard wired fan to minimize latency. However, if you want to use the V3 Mini wirelessly, it supports both Bluetooth and Razer’s 2.4GHz connectivity through a USB dongle. As an added benefit, if you use other Razer wireless products (for example, the Orochi V2 mouse), you can link them to a single USB dongle. Razer claims the V3 Mini can last up to 200 hours (a little over 8 days) on a charge.

Finally, Razer’s software works well. Beyond the initial setup and picking my lighting options, I didn’t really touch the software and, thankfully, it stayed out of my way too. It lets you mess around with macros and other key customizations, set lighting effects and brightness and has power-saving options.

A great board, but maybe not for everyone 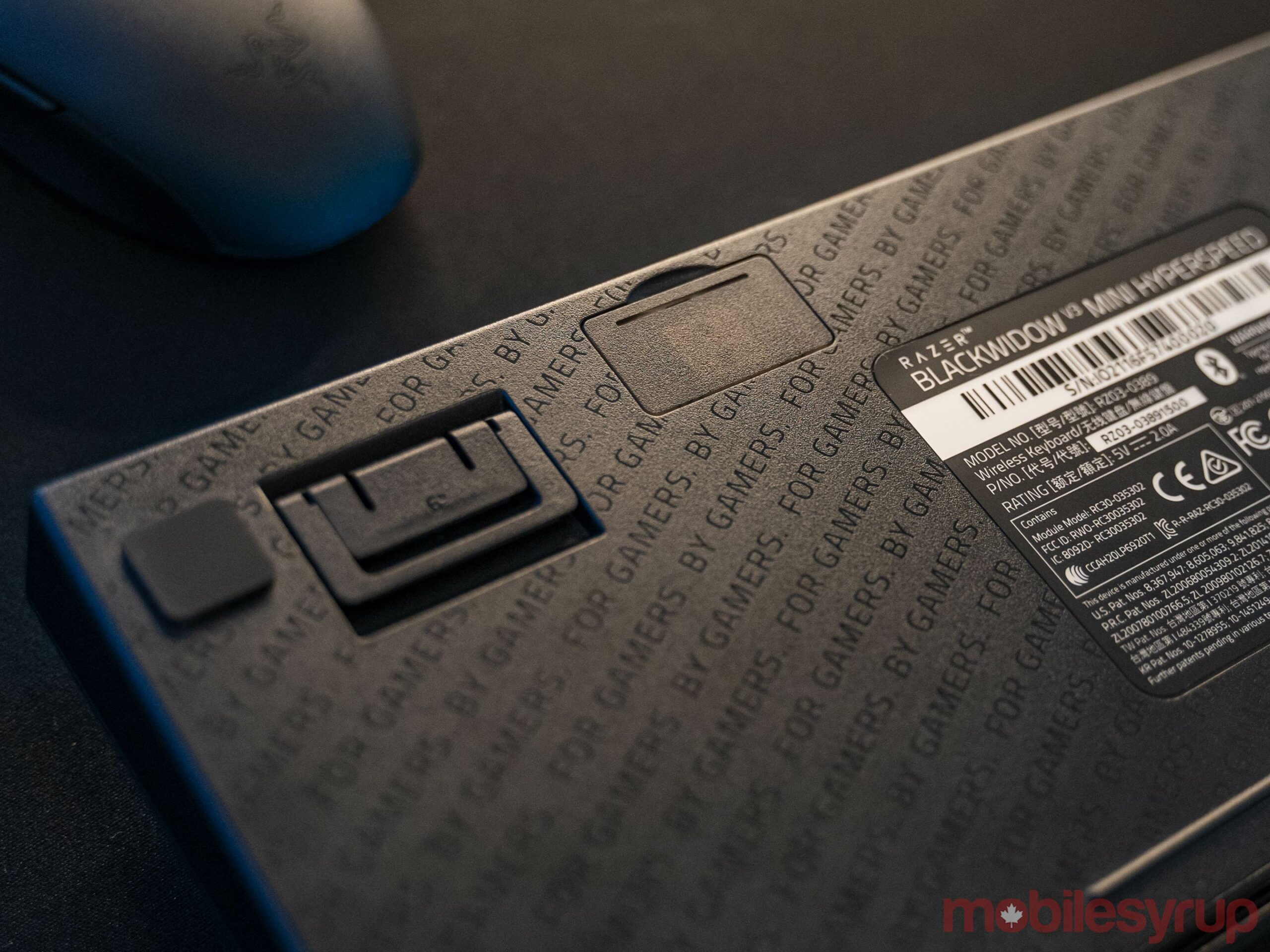 Razer’s BlackWidow V3 Mini Hyperspeed keyboard is all-around a good keyboard, although I recognize it isn’t a great fit for me. For many, however, it could be an excellent mechanical keyboard option, especially if you’re not ready to dive into the wonderful and wacky world of custom-built boards.

That said, the V3 Mini also costs $239.99, which may be a deterrent for some. On the one hand, $239.99 seems like a lot of money for a keyboard, but having seen how much some people spend on custom boards, that could also be a bargain.

Ultimately, there are a bunch of options. While I wouldn’t classify Razer’s V3 Mini as the best when it comes to price, it is much more accessible for the average person. Razer is a known entity and for many interested in a decent pre-built, the V3 Mini offers a solid entry point to mechanical keyboards.

The Razer BlackWidow V3 Mini Hyperspeed is available on Razer’s website for $239.99, as well as at retailers like Amazon and Best Buy.