While the headset only works with Xbox consoles, it features completely wireless voice chat 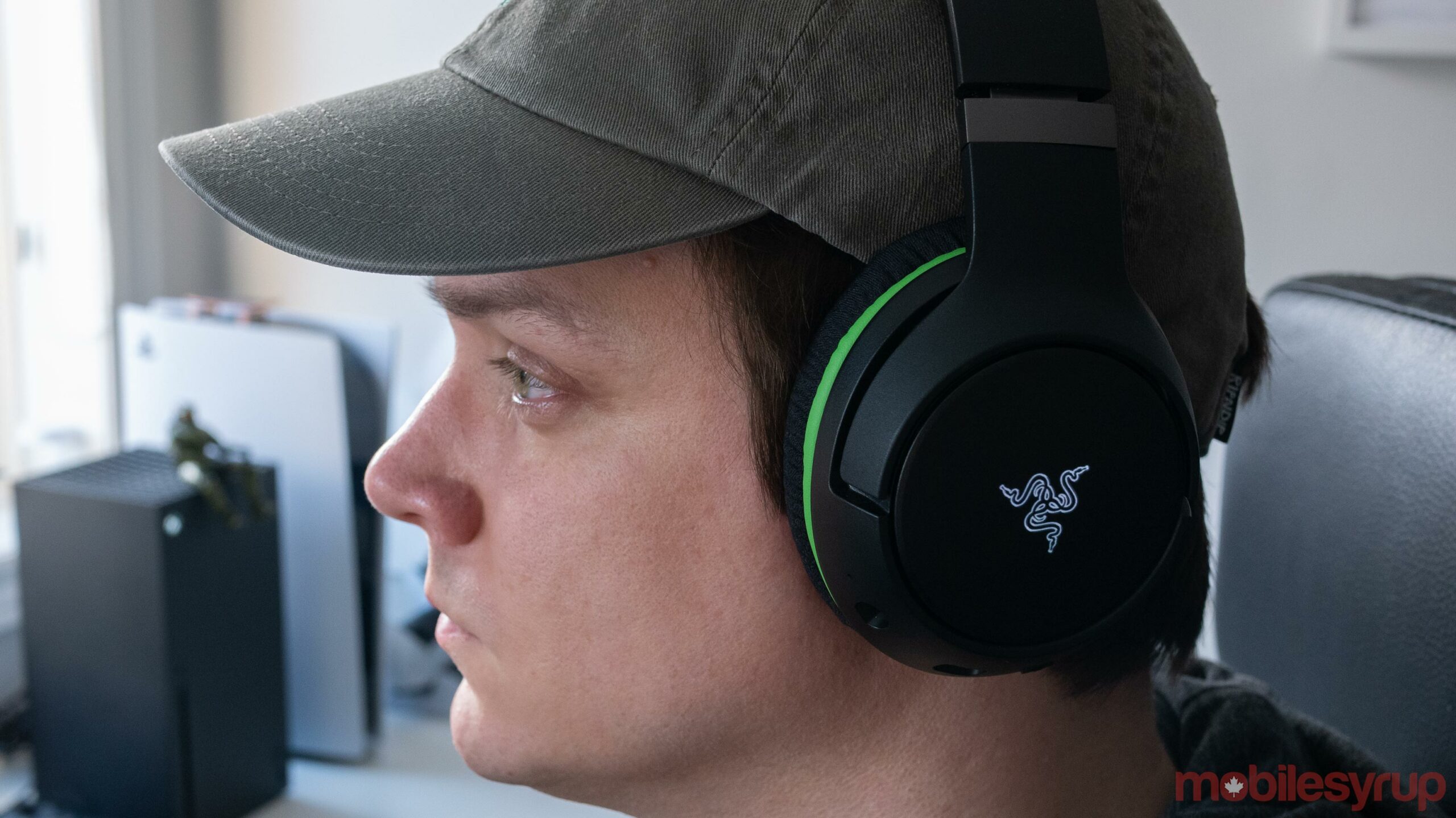 With Microsoft’s Xbox Wireless Headset looming on the horizon, now is a great time to check out some of the third-party wireless Xbox headsets that are already available.

I’ve used several different gaming headsets over the years — including a pair of ancient Sennheiser wireless headphones in the mid-2000s with a broken OG Xbox mic duct-taped to their side — and Razer’s Kaira Pro gaming headset is one of the best I’ve come across as long as you plan to only use it with an Xbox console (more on this later).

Coming in at $199, Razer’s Kaira Pro features the same drivers as Razer’s cheaper, multi-platform BlackShark V2 gaming headset. This means that while the Kaira Pro features decent sound quality, the headset lacks noise-cancelling and is only compatible with Windows Sonic virtual surround sound and not Dolby Atmos or DTS Headphone: X. 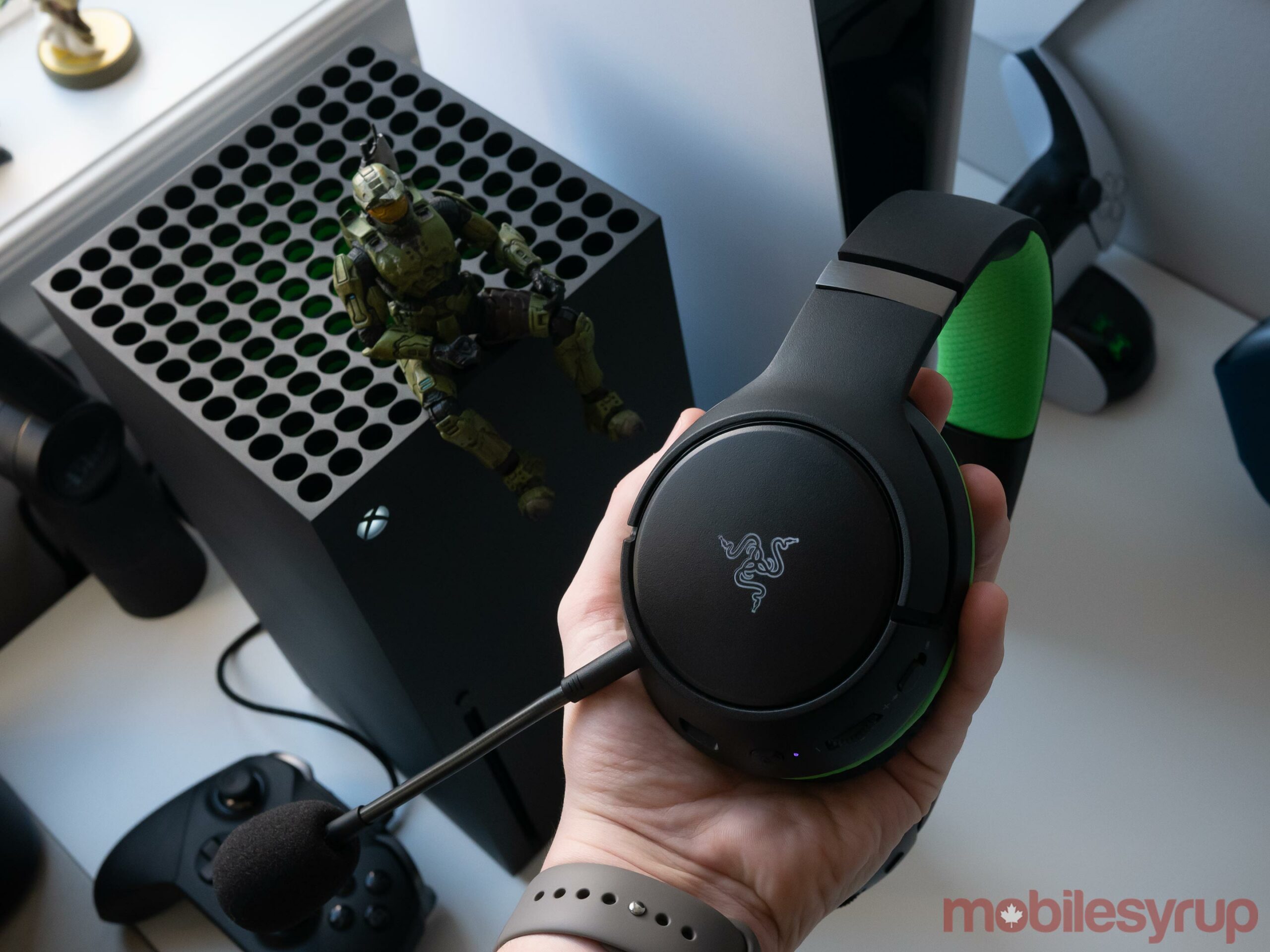 In practice, this doesn’t really matter much since I’ve always found that all three forms of virtual surround sound are nearly identical. That said, Microsoft’s upcoming Xbox Wireless Headset does support Atmos and DTS, so if that’s a feature you care about, it might be worth waiting. The audio experience isn’t entirely perfect, however.

For example, when the headphones’ battery is low, any sound with bass has a slight crackle. This can be solved by making sure the Kaira Pro always has a decent charge, which is somewhat easy since they feature 15 hours of battery life. I also can’t help but wish they featured some form of noise-cancelling like Turtle Beach’s comparably priced $199 Stealth 700 Wireless Gaming Headset.

“The fact that the mic can be entirely removed, unlike Turtle Beach’s very similar Stealth 700 headset, is a bonus”

Other notable Kaira Pro features include USB-C charging, a detachable cardioid mic that’s easily adjustable, and individual volume wheels for game chat and voice chat on the right and left cups. If you’ve spent time playing games with a friend who can never get their game volume/game chat levelled properly, often resulting in an annoying echo every time you speak, you’ll know how important independent volume adjustment is. There’s also a built-in mic if you want to make calls with the headset.

The fact that the cardioid mic can be entirely removed, unlike Turtle Beach’s very similar Stealth 700 headset, is a bonus, especially if you plan to use the headset for solo gaming.

There’s a sync button, an Xbox button, a mute button, and a Bluetooth pairing button. While it might not sound like Bluetooth is a worthwhile feature in a gaming headset, hear me out. A separate Bluetooth connection allows you to listen to music and podcasts played from your smartphone with ease while gaming, which is something I find myself doing whenever I’m playing a multiplayer title like Apex Legends solo. 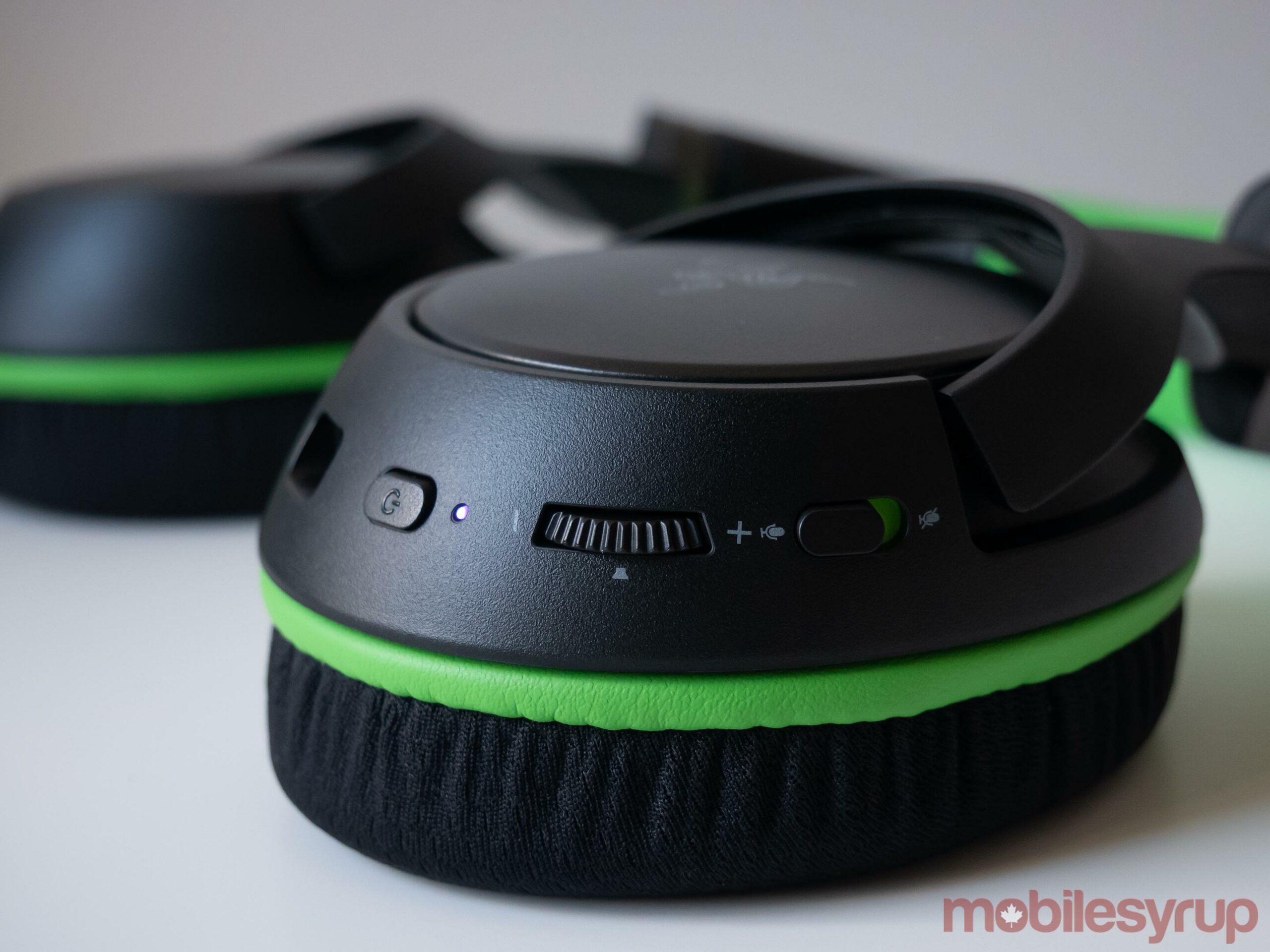 If you’re the type of gamer who wants to customize the lights on their accessories, Razer, of course, has you covered. There’s a dedicated Razer Headset Setup app on Xbox consoles that allows you to change its RGB lighting, EQ and microphone accessibility. I found the bright Razer green a little too intense for me, so I quickly changed it to a more subtle blue.

Regarding build-quality, the Kaira Pro is one of the more high-quality headsets I’ve used in this price range. It’s also comfortable even if you plan to wear it for long periods of time, thanks to its soft, articulating earcups and cushioned headband. Unfortunately, the headset doesn’t fold in half like some over-ear headphones, making them a little bulkier to take on the go. The Kaira Pro also looks and feels better than the relatively lacklustre feeling Gen 1 Turtle Beach Stealth 600s or 700s. It’s worth noting that I haven’t tried the Gen 2 Stealth 700s yet, and they seem to be an improvement over their predecessor.

So far, the Razer Kaira Pro might sound like an average gaming headset, and for the most part, it is. What separates it from the competition is that it’s part of a small collection of Xbox headsets that work entirely wirelessly, including voice chat. Just like the addition of Bluetooth, this might not sound like that big of a deal until you actually try it.

Since I spend nearly my entire life inside amid the ongoing COVID-19 pandemic, a good chunk of my evenings often involves playing multiplayer games with friends on the Xbox Series X.

Not needing to plug the headset directly into my controller to chat is incredibly convenient. I can walk downstairs, say hi to my partner, grab a drink or even make a quick meal between games, all while still connected to either game or Party Chat. Wireless voice chat is the type of feature you don’t really appreciate until you’ve used it; now, I don’t think I could go back.

Though I prefer the Razer Kaira Pro headset over Turtle Beach’s first-gen Stealth 700s, it will be interesting to see how it compares to Microsoft’s upcoming $129 Xbox wireless headset. This story will be updated with Xbox Wireless Headset impressions after I get my hands on it following its release on March 16th. 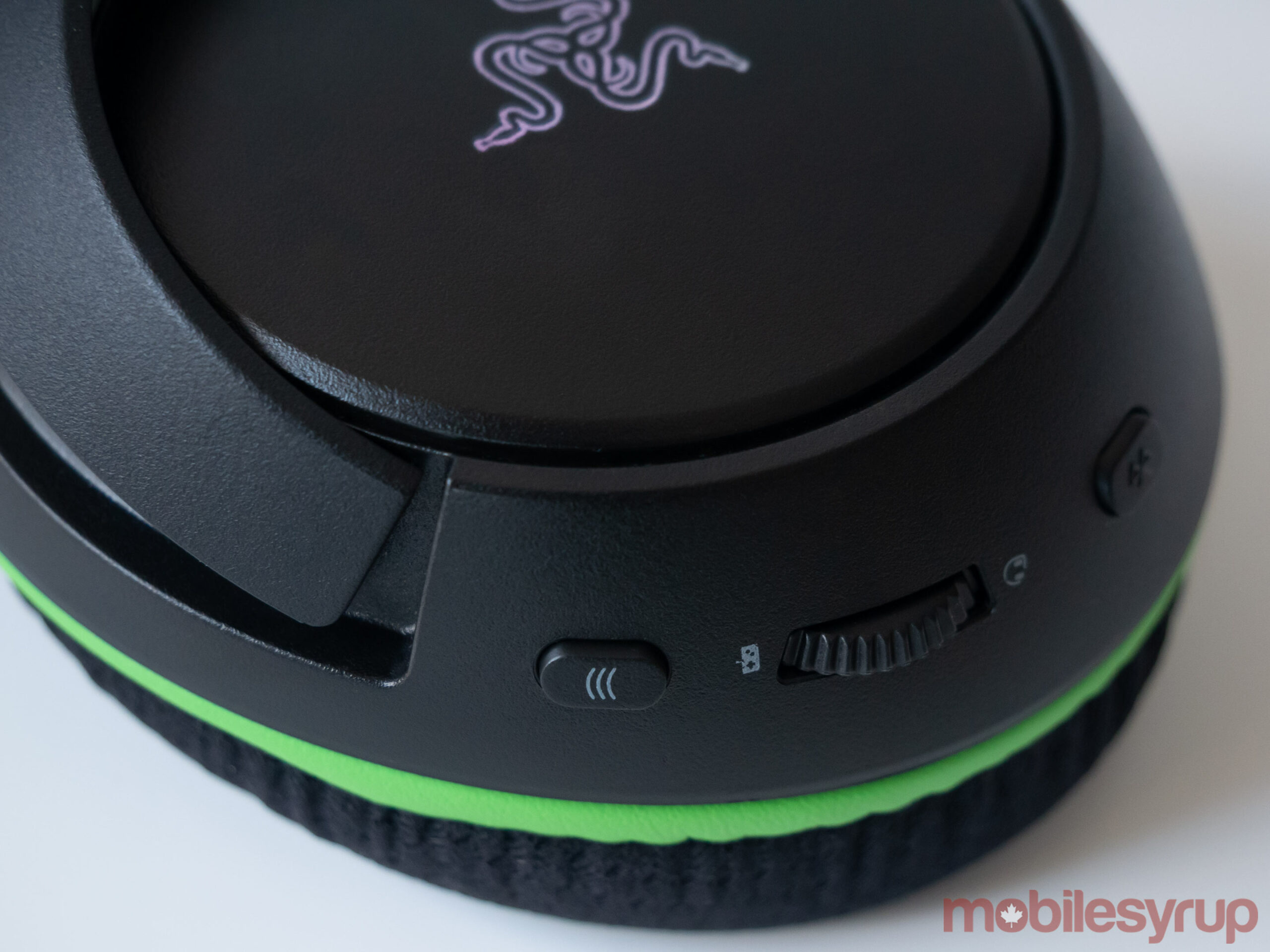 What makes SteelSeries’ 7x and 9x gaming headsets unique is that they can be used with a wide variety of devices, including the PlayStation 4, PlayStaton 5, Switch and more, thanks to their included wireless adapter. Razer’s Kaira Pro, on the other hand, is only compatible with Xbox consoles.

While this works for me, given I’ve amassed several pairs of headphones for different devices and primarily only play multiplayer games with friends on the Xbox Series X, that likely isn’t the average person’s experience. If you want to use the same headset with multiple devices, SteelSeries 7x and 9x are undeniably better options.

With that said, if you’re looking for a great-sounding Xbox-only headset that offers the convenience of wireless voice chat, Razer’s Kaira Pro is a great option.

The headset is compatible with the Xbox One, Xbox One S, Xbox One X and Xbox Series S. The Kaira Pro is available for $199 at several retailers, including Amazon and directly through Razer’s online store. Razer also sells a version of the headset just called Kaira that doesn’t feature Bluetooth 5.0, a dedicated mobile mic or RGB lights.