Roomba i3+ Review: Lower cost, but not less capable

The Clean Base dramatically improves the robot vacuum experience, but the wasteful dirt bags are a disappointment 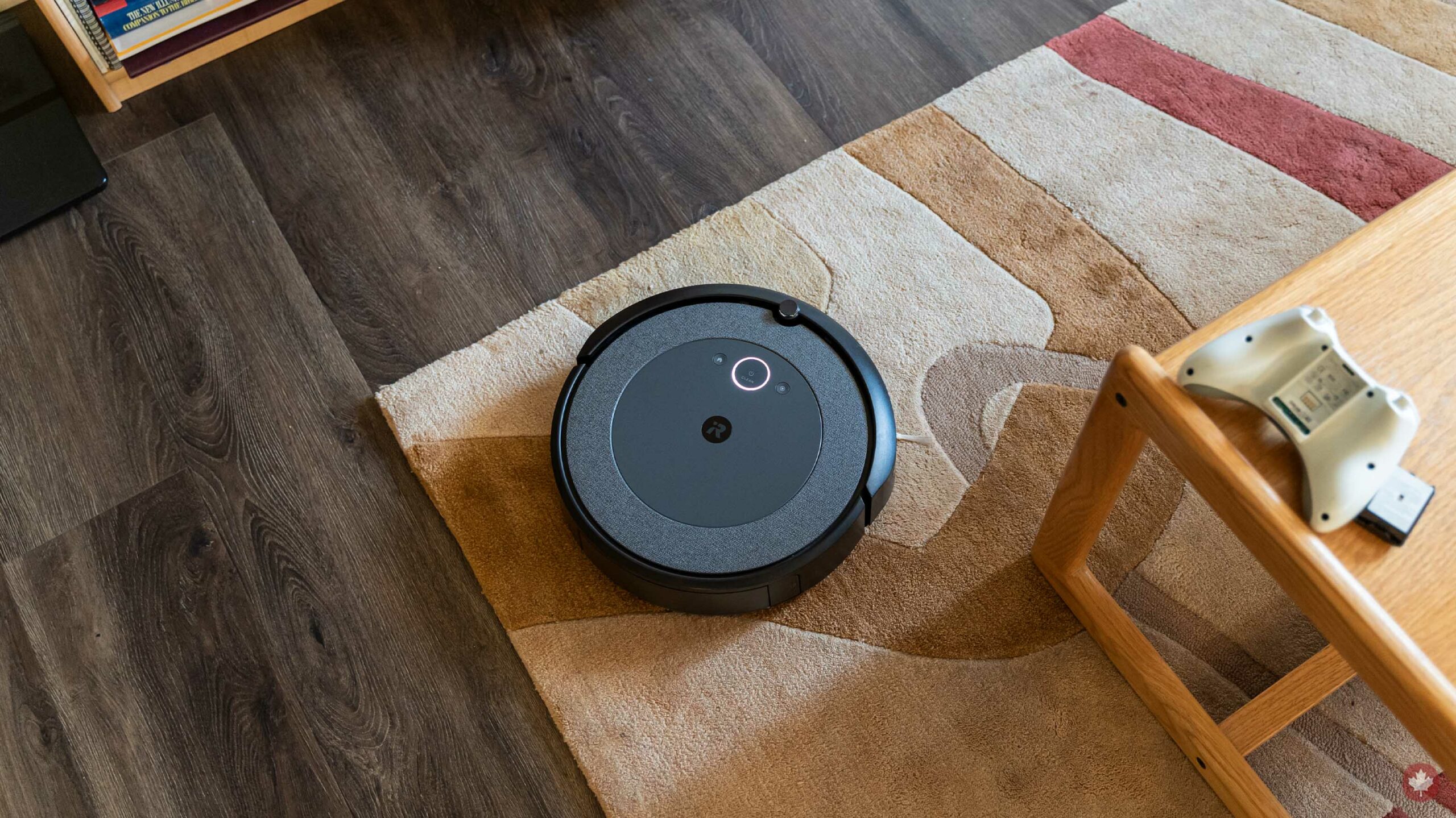 Earlier this year, iRobot unveiled the newest Roomba vacuum robot in its lineup, the i3. What stands out most about the i3 is its lower price and support for the iRobot Clean Base — arguably one of the biggest improvements to robot vacuums in a long time.

For those unfamiliar with iRobot’s newest innovation, the Clean Base first launched alongside the Roomba i7 in 2018. It’s essentially an improvement on the typical Roomba charging base that lets the robot empty its dust bin automatically. This saves users from having to empty the bin after each clean manually.

The Clean Base later expanded to both the higher-end Roomba s9 and now the mid-range Roomba i3. While not the only benefit of the i3, the Clean Base goes a long way to making the robot feel much more convenient than previous models.

Maybe not the smartest robot, but it cleans well 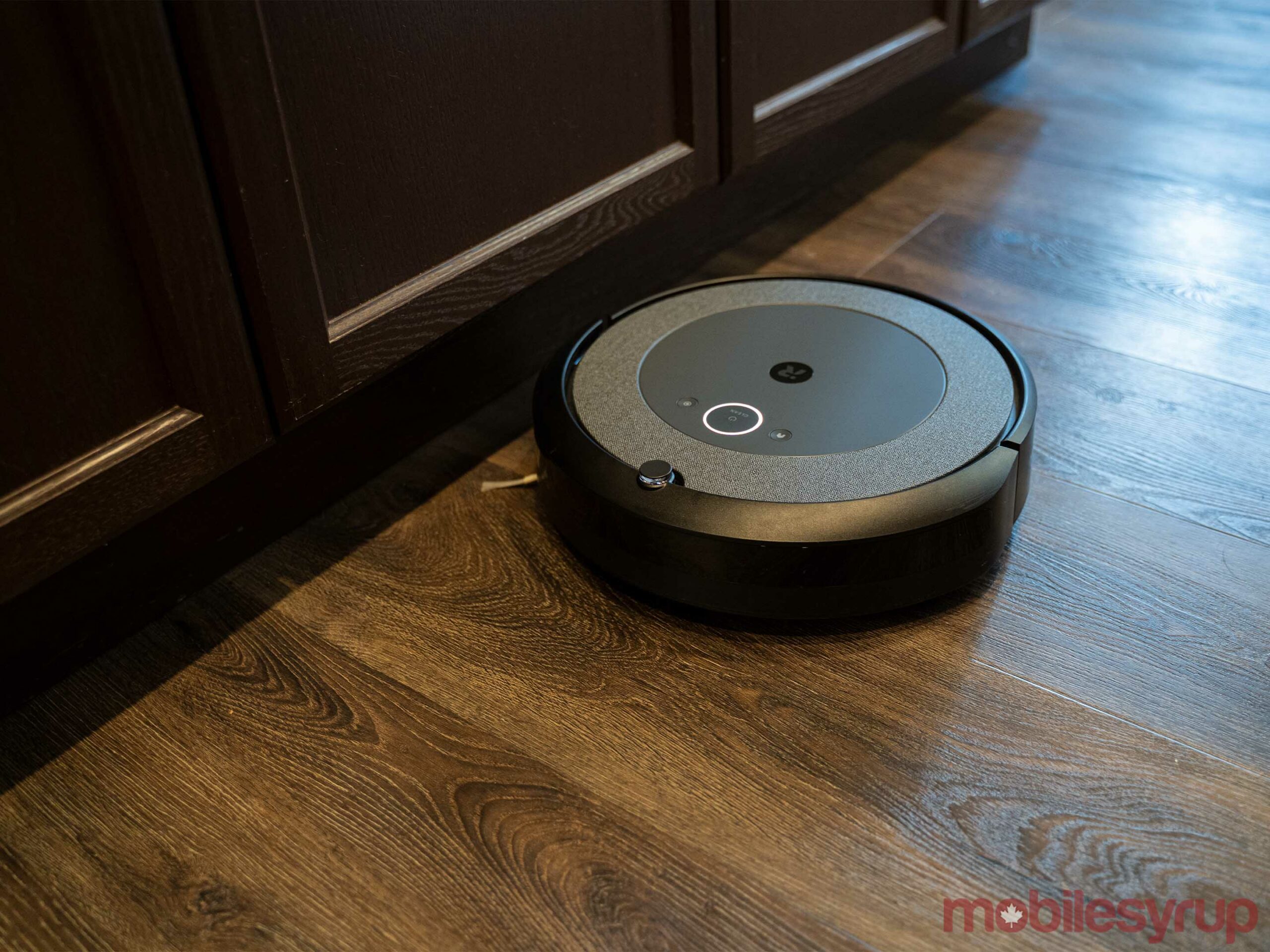 I have to say that when I first started testing the Roomba i3 review unit, I was quite surprised. My only experience with robot vacuums prior to the i3 involved extensive mapping procedures before I could let the robot freely clean my home.

This was not the case with the Roomba i3, which just figures it out as it cleans. Higher-end Roomba models can make maps of your home and can clean specific areas. I’ve tried other robot vacuums requiring a mapping session where they explore the home and build out a map. The Roomba i3, on the other hand, generates a map as it cleans so users can review which areas of their home the robot vacuumed. It’s worth noting high-end Roombas also do this as well.

Unfortunately, the Roomba i3 is all-or-nothing when it comes to cleaning, but that’s usually how I run robot vacuums anyway, so I didn’t miss having the ability to send it to specific locations of my home.

I had some concerns about the Roomba i3 getting lost, stuck or failing to clean some areas of my home, but so far, that hasn’t been a problem (excluding one instance where it got stuck under my bed, but I was never able to figure out why and it never happened again). iRobot really has outdone itself with the cleaning mechanics here and, while I’m sure some may appreciate the additional intelligence and capability of the higher-end robots, I never felt the need for more than what the i3 offered. 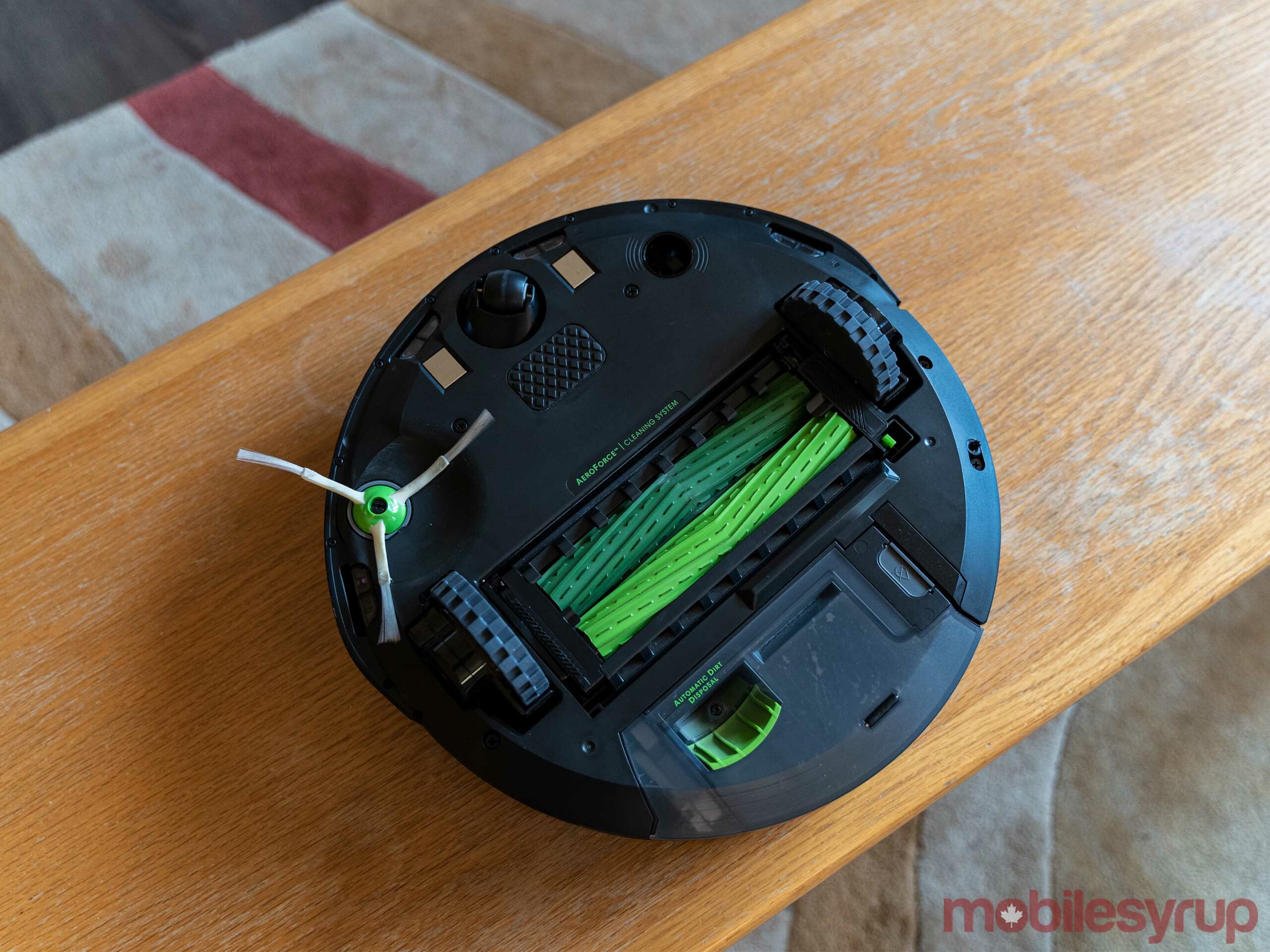 The Roomba i7 features ‘custom cleaning control’ as well as the ability for users to select specific rooms or areas to clean. Users can also create ‘Clean Zones’ and ‘Keep Out Zones,’ none of which are available with the i3. But all these features really do is grant users more control over how and when their Roomba cleans.

That’s not to say the i3 doesn’t have any intelligence features. For one, it’s capable of detecting areas that are extra dirty and performing deeper cleans by increasing suction or going over dirty patches multiple times. The Roomba i3 can also pause a clean to recharge or empty its dust bin into the Cleaning Base and then resuming when it’s ready. 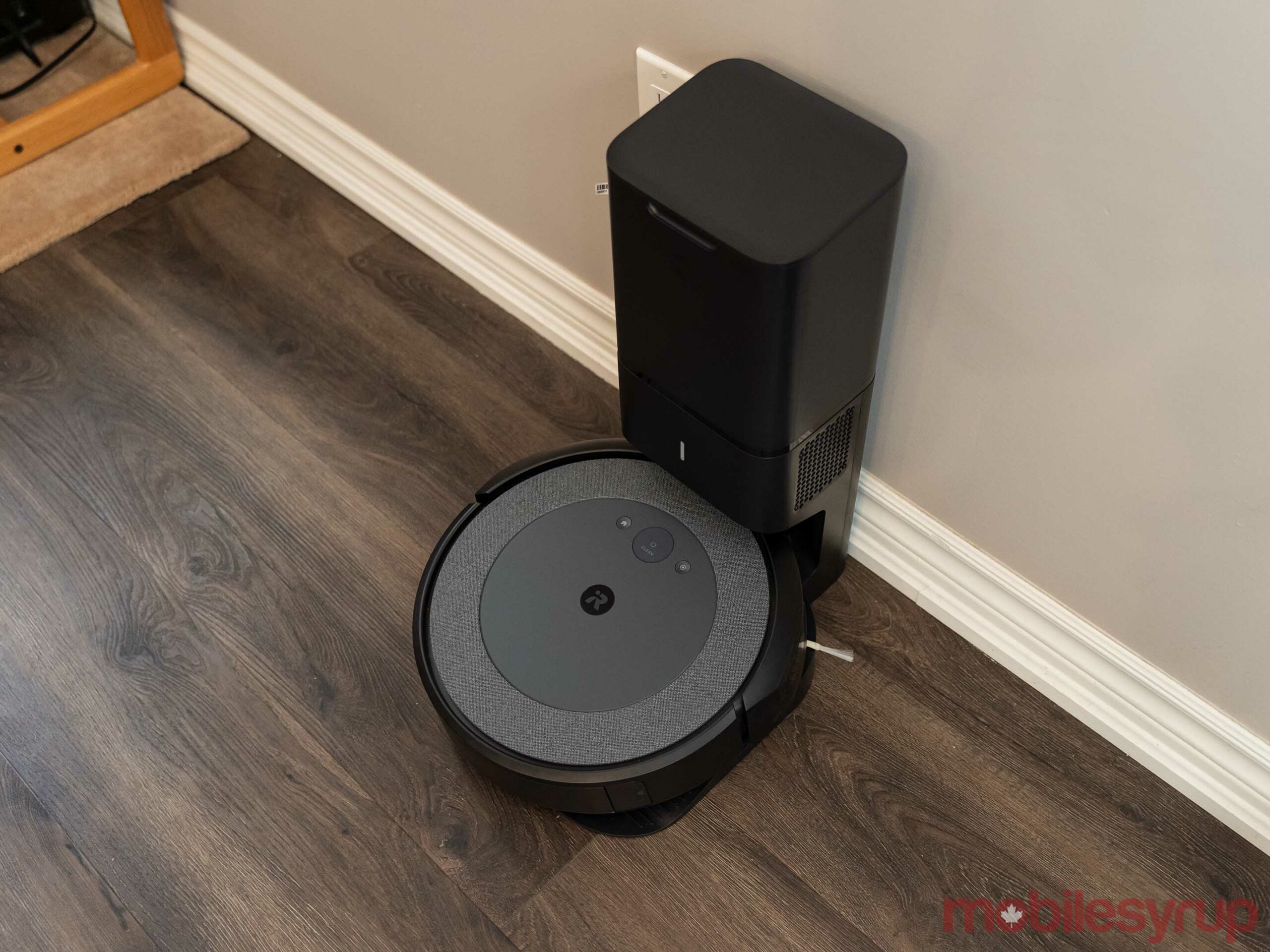 Perhaps the most revolutionary part of testing the Roomba i3 for me was the Clean Base. Even though it’s been around for a while now, this was my first experience testing a robot vacuum with the ability to empty itself. It really makes the experience much better.

With robots I’ve tried in the past, I found myself emptying the bin once every cleaning session — sometimes I could stretch it to once every other session, depending on how long I went between cleans. Emptying the bin was never particularly fun and added an extra level of upkeep to the robot cleaning experience. 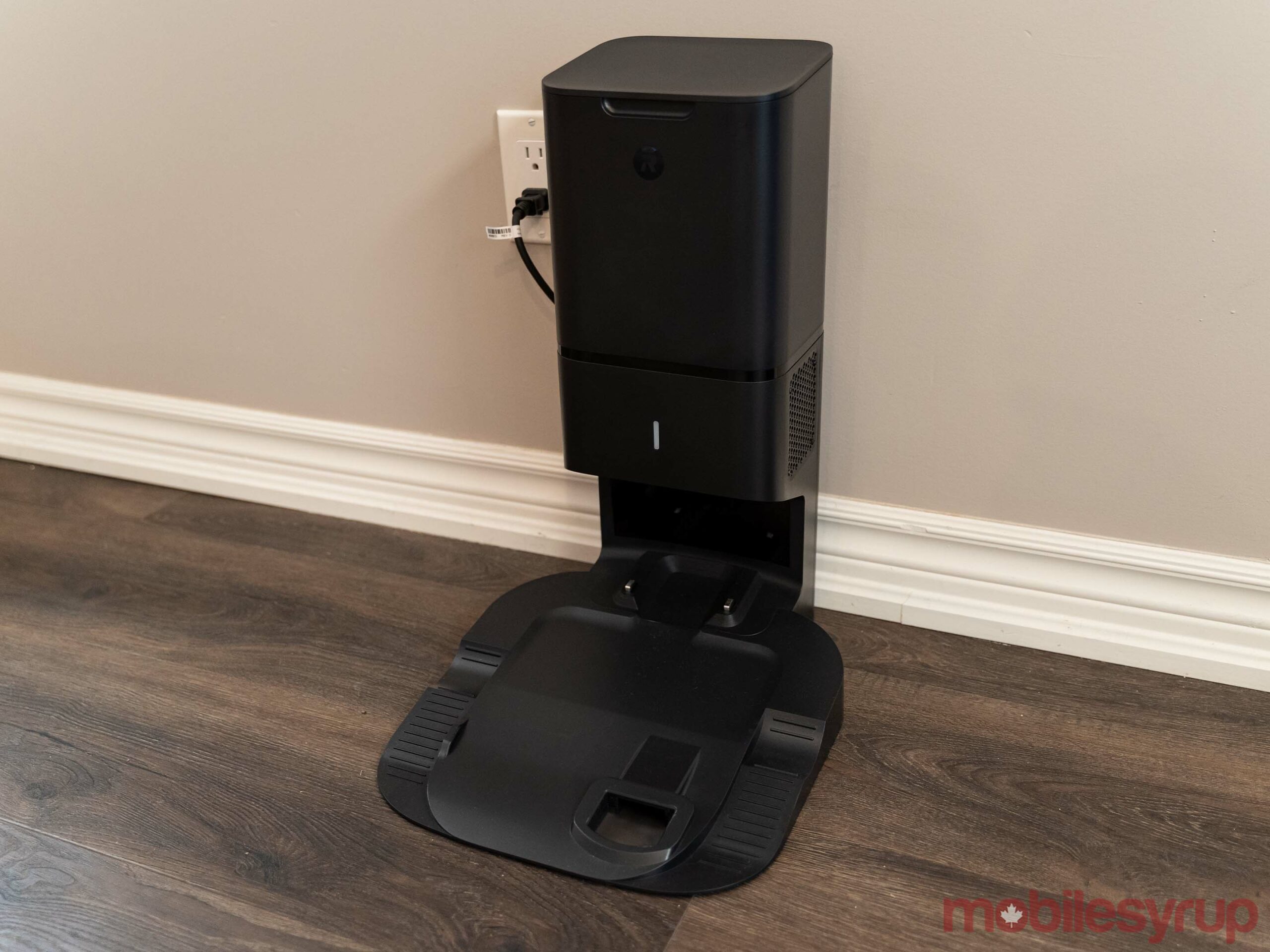 However, Clean Base removes this by emptying the bin on the Roomba i3 for you. iRobot says the Clean Base can hold up to 60 bins worth of dirt, which is quite a bit. When I checked my bag, it seemed like it was full. However, the Clean Base never alerted me to the bag being full, and MobileSyrup colleagues who have tested Clean Bases before report that it just keeps packing in the dirt, and the bags can last for a while. Of course, this can depend on your home, how many people live there and whether you have pets. iRobot told MobileSyrup that anecdotal usage shows people get an average of around two months from a bag and even up to four months on a single bag.

Speaking of the bag, Clean Base empties the Roomba’s dust bin into special ‘AllergenLock’ Dirt Disposal Bags. iRobot says that it opted to use a bag system like this to prevent dust clouds, and the AllergenLock bags do this well. Users get a few of these with the Roomba i3, but iRobot also sells these bags separately — there’s a three-pack on the company’s website for $19.99.

… but it’s not perfect 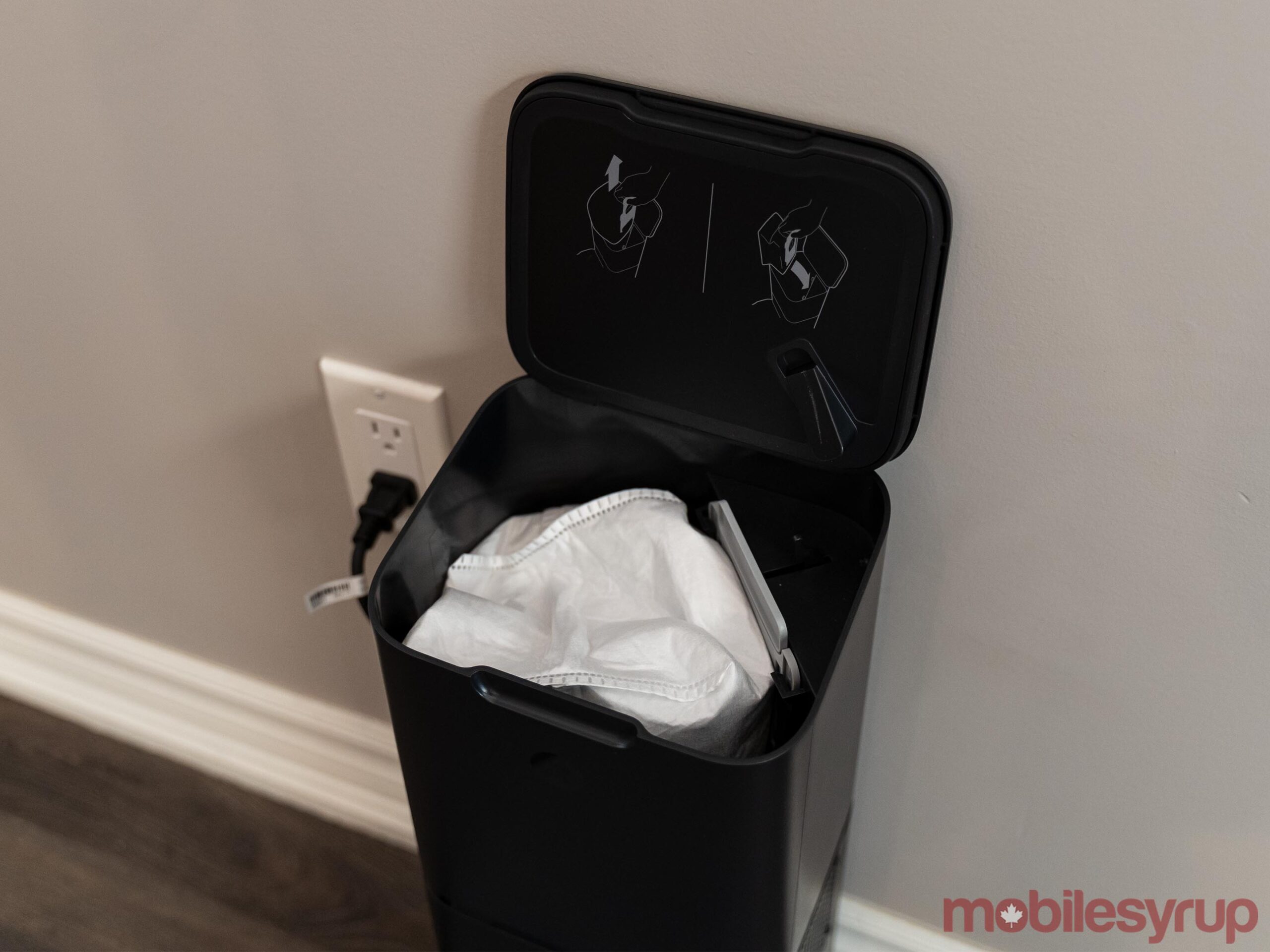 The dirt bags are perhaps one of the biggest issues I have with the Clean Base overall. Recurring costs aside, the bags are incredibly wasteful. They’re built with a special plastic door that can close to keep dirt from spilling out of the bag. While appreciated, the door’s design also prevents people from dumping out the bags when they’re full and then re-using them. It might be possible to use a vacuum to suck dirt out of the hole in the bag, but I didn’t have one to test this theory.

Regardless, it’s incredibly disappointing to see such a wasteful system with the Roomba i3 — and for that matter, any Roomba using a Clean Base. Given the ongoing climate crisis and the issues stemming from plastic pollution, a forcibly wasteful system like this is unacceptable. It should be noted the plastic trapdoor can be removed and recycled, but a system that prioritizes reusing the bags would be better. And, as mentioned up top, the bags can last a while.

My other issue with the Clean Base is it’s incredibly loud. When the Roomba i3 docks on the base and starts the emptying process, it sounds like a jet taking off. This is doubly annoying since the i3 likes to empty its bin every time it gets on the base, even if the bin isn’t full. This has resulted in the Roomba going to the base to empty its full bin, getting off the base to vacuum for a few minutes before returning to the base because of a low battery and emptying again while it charges. 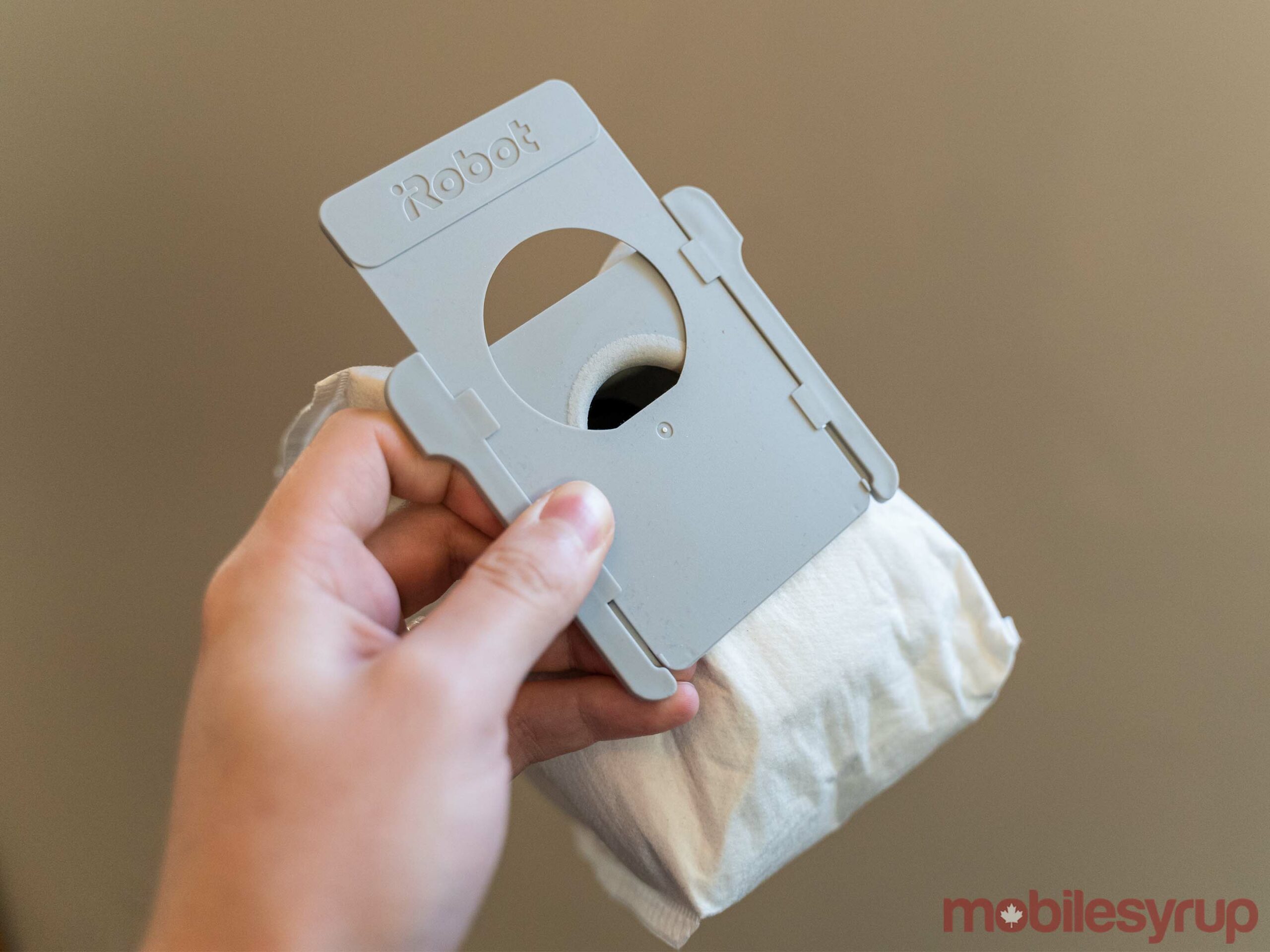 This is certainly less of an issue depending on where you place the Clean Base — in my apartment, there isn’t a lot of space so the Clean Base hangs out in the family room where it easily drowns out the sound of the TV with its loud emptying procedure.

Overall, it’s a minor complaint. If you plan to get the Clean Base, try and place it somewhere in your home where the Roomba i3 won’t disrupt you with the loud emptying procedure.

Some users have taken to iRobot’s website to complain about how long the Clean Base lasts, with some saying they’ve had to replace their Clean Base multiple times. I have yet to encounter any issues with my Clean Base aside from the loud volume and wasteful dirt collection bags. 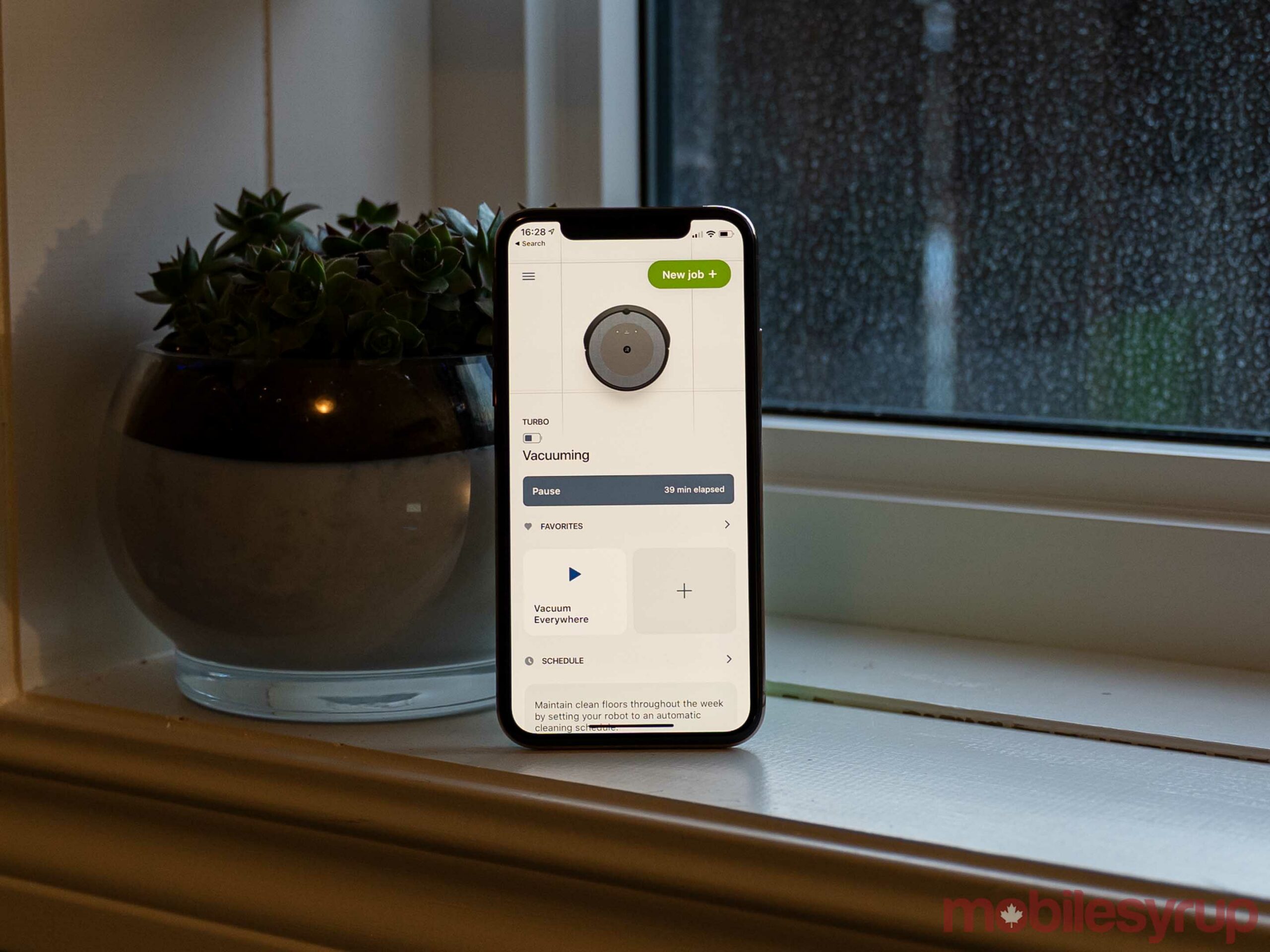 It’s also worth taking a moment to acknowledge the work iRobot put into its refreshed Roomba control app. iRobot launched its new app in August, and it looks great. With the Roomba i3, it offers some basic customization features.

For example, you can set ‘Favourite’ cleaning modes, although I didn’t find this option particularly useful given the all-or-nothing approach to cleaning. Presumably, the higher-end Roombas allow users to set locations in their Favourites, which let them send the robot to clean a specific room. The only option i3 users get is a cleaning time limit, which I found wasn’t that useful. 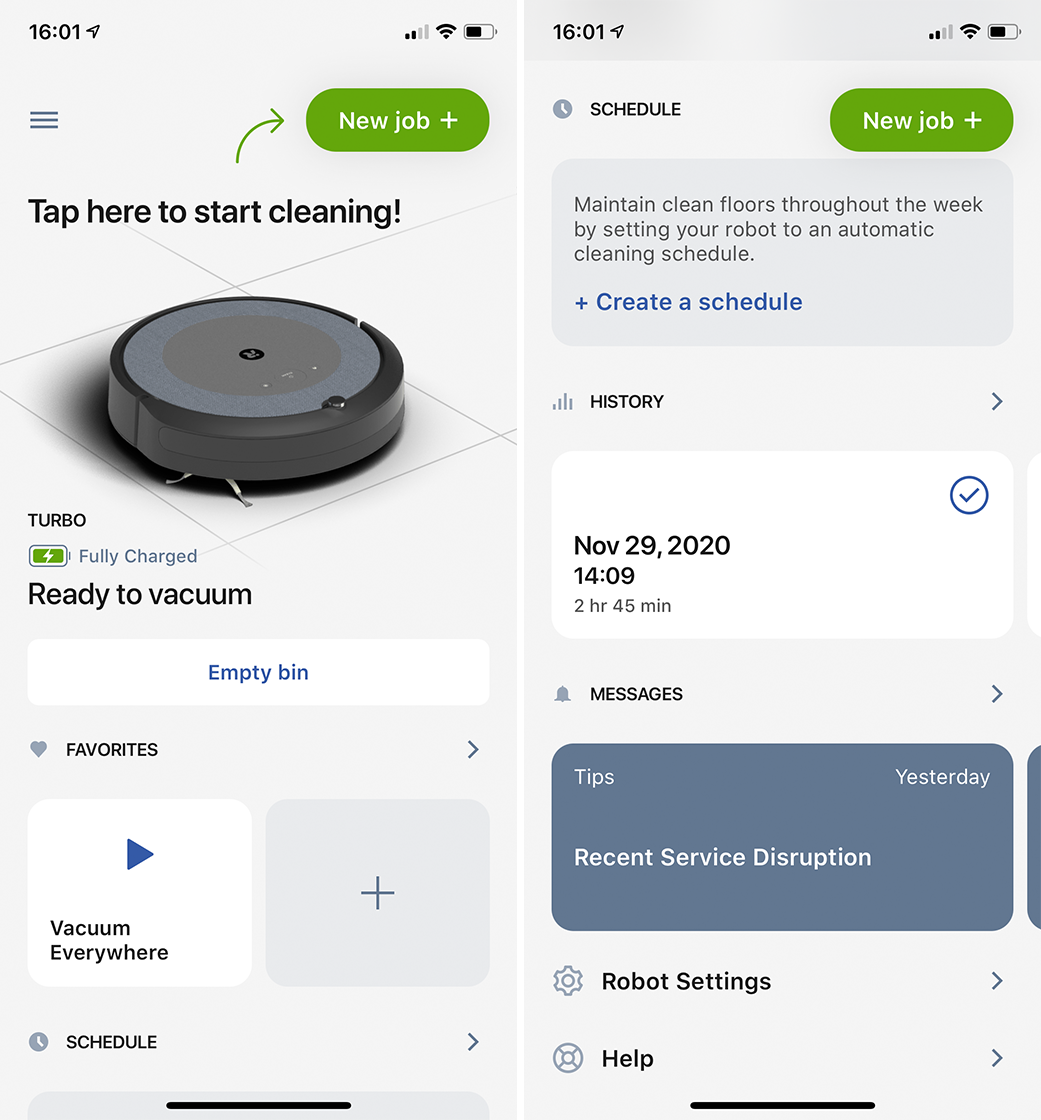 Users can also create cleaning schedules for when the Roomba i3 cleans their home. There are two options for creating schedules. The first is time-based — users can set the i3 to clean at specific times on specific days.

The other, more exciting option is the ‘Automation’ schedule, which lets users set the robot to clean when they leave the house. Users can also set this behaviour to only trigger on select days of the week if they don’t need the robot to vacuum every time they leave.

If I weren’t working from home because of the pandemic, I’d likely set up this option to let the Roomba clean after leaving for work. However, since I’m always at home, I just use the app to start a clean whenever it is convenient for me. 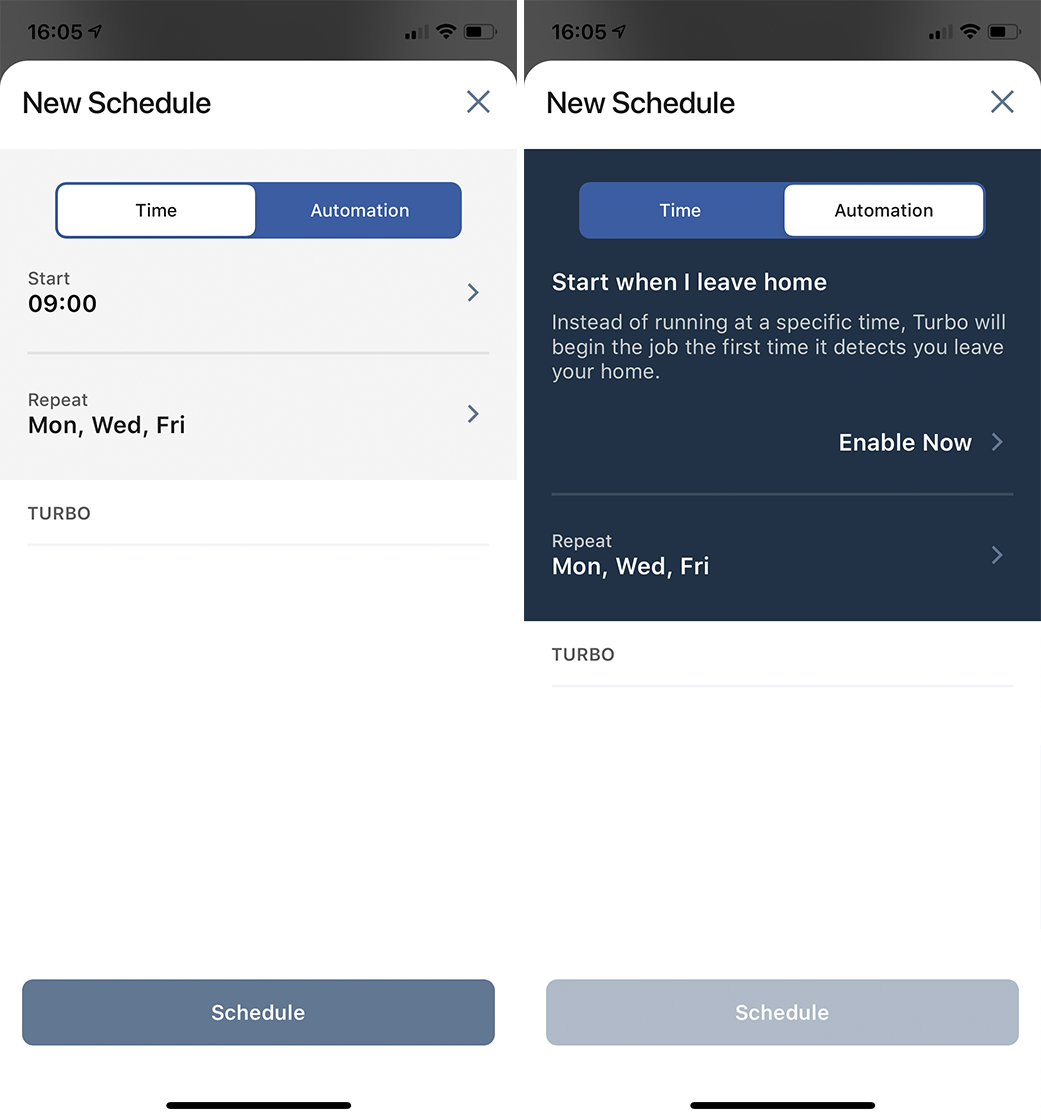 The iRobot Home app includes a cleaning history complete with maps showing where your Roomba cleaned and ‘Dirt Events,’ which are areas where the Roomba i3 focused after noticing more dirt.

Finally, users can connect their Roomba to Google Home or Alexa so they can control their robot with either voice assistant.

The Roomba i3 is very capable 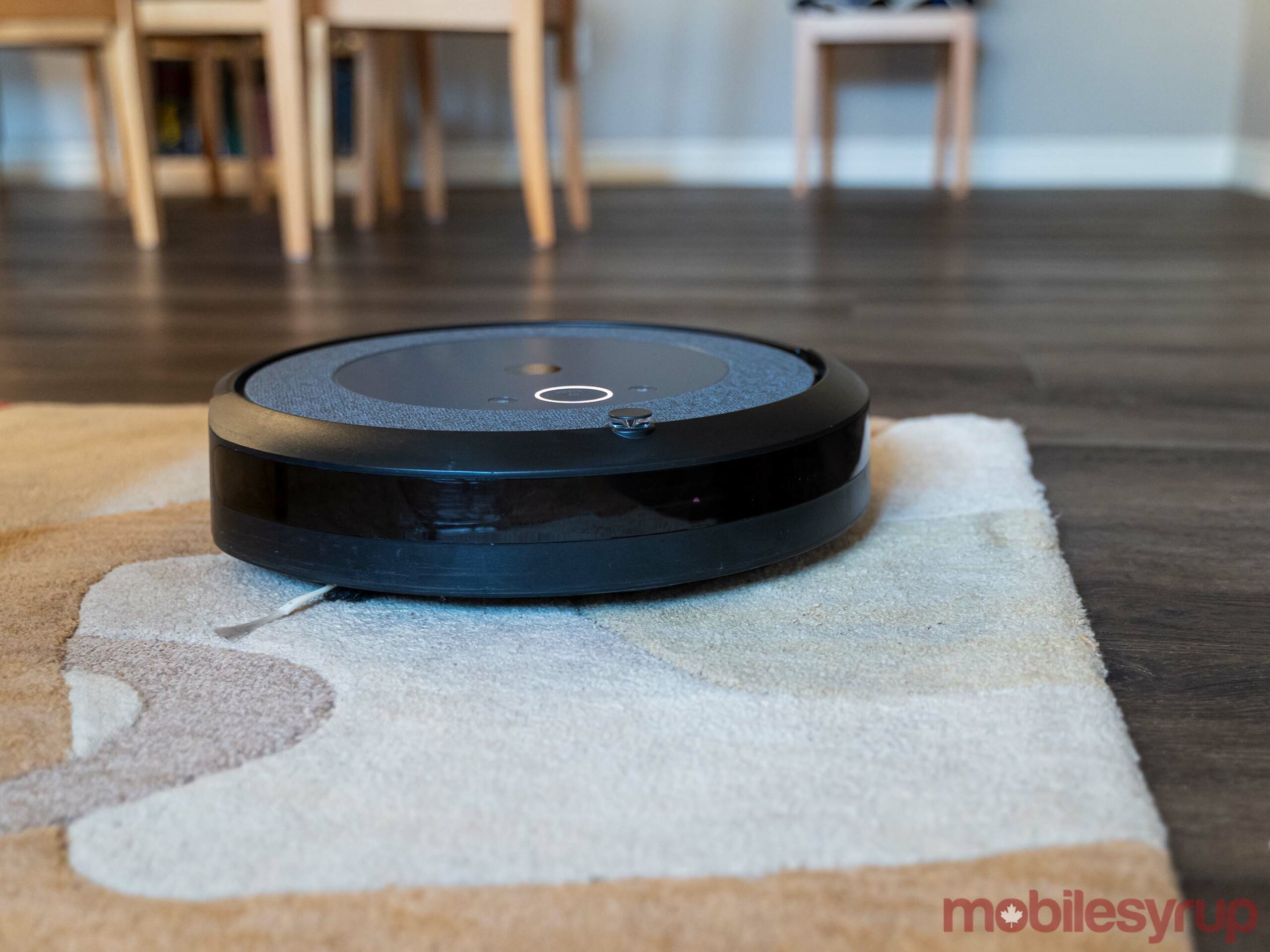 Throughout my testing, the Roomba i3 impressed me with its ability to reliably vacuum my home without running into issues I’ve encountered with other robot vacuums. Even with its basic navigation system, the Roomba i3 consistently avoided obstacles and managed not to get tripped up on furniture.

Sure, you might get added smarts with a higher-level Roomba robot, like the i7 or s9, but for those who don’t want to spend that kind of money, the i3 is a competent, cost-effective alternative.

On its own, iRobot chargers $499.99 for the Roomba i3 robot, but for $749.99, the Roomba i3+ comes with the Clean Base (there’s no difference between the robots). You can buy the Roomba i3 and later pick up a Clean Base on its own if you prefer, but the individual prices mean you’ll pay about $50 more if you do it that way. 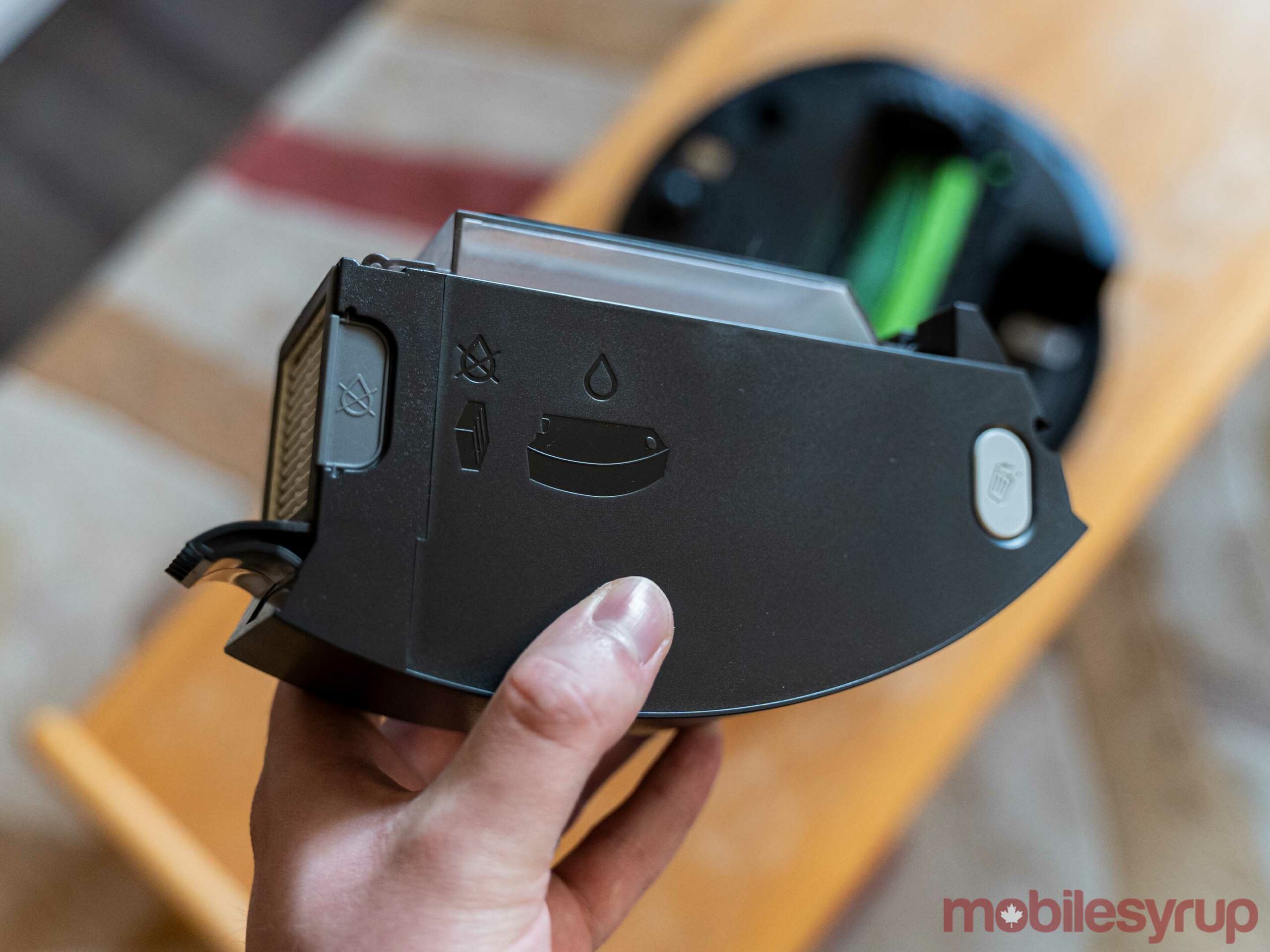 If you ignore the sale pricing (which won’t always be around), that means the i3+ costs as much as the i7, so if the additional smart cleaning capabilities are more important to you than the convenience of the Clean Base, I’d advise going for the regular i7 model. For myself, I’d rather have the convenience of the Clean Base. If your main goal is spending less money, the regular i3 is a great option too.

Ultimately, if you’re looking to get started with Roomba robot vacuums but don’t want to spend a lot, consider the Roomba i3 and, if feasible, the Clean Base extension as well. If you have the money, the i7 is a better option, but the Roomba i3 handles all the basics well and is well worth the cost.

Update 12/10/2020 at 11:03am: Updated the review to better reflect the situation of the AllergenLock bags, how long they last and that they are partially recyclable.

If you’re looking to get started with Roomba robot vacuums but don’t want to spend a lot, consider the Roomba i3.