The core of 'Factorio' is automation -- if you can do it, you can automate it 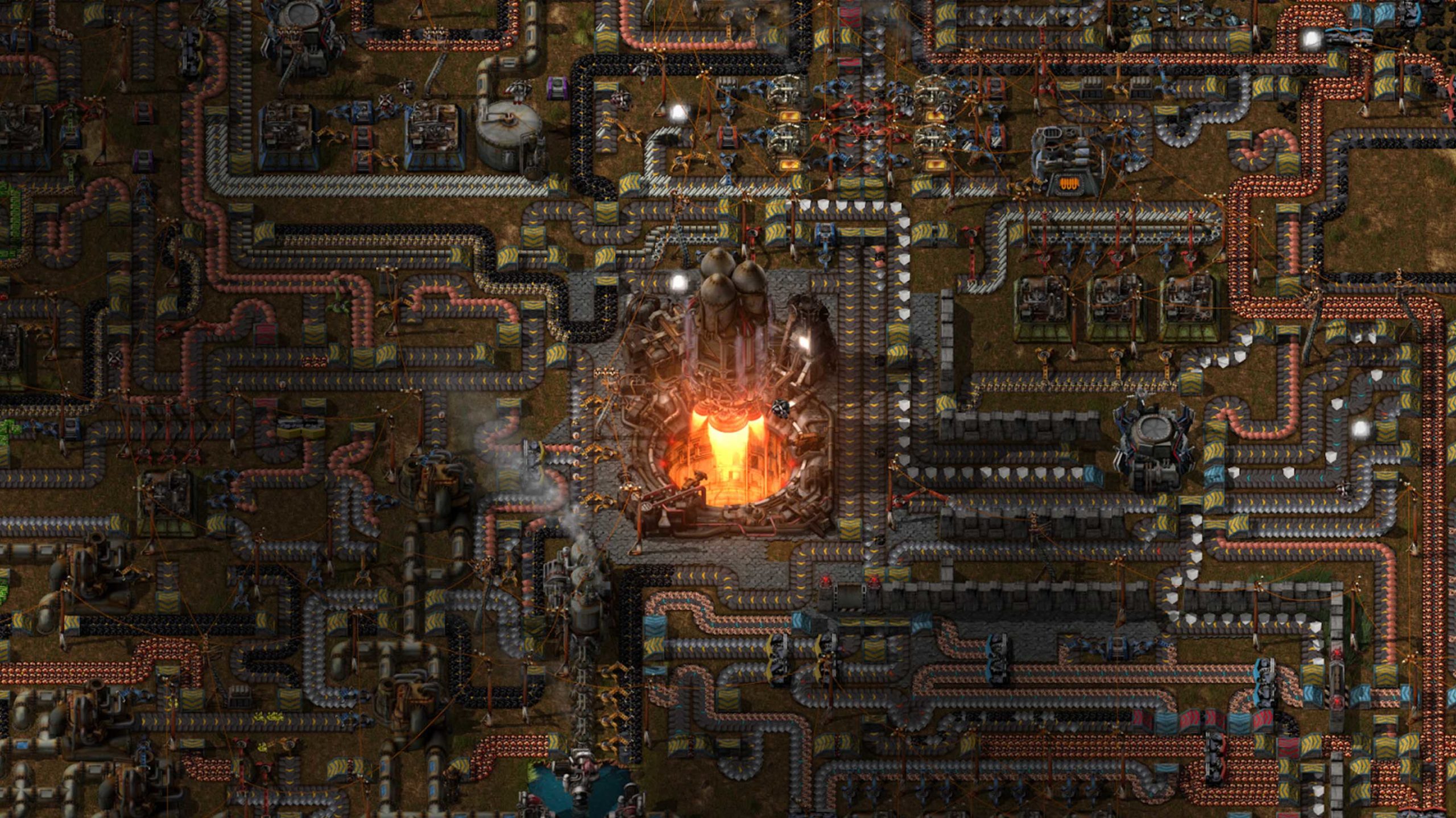 As another month in isolation comes to a close, I find myself looking back and wondering what’s come from my free time. For April, it’s been a sprawling factory built in Factorio, a PC game that sounds like it really shouldn’t be as addicting as it is.

The core idea of Factorio is fairly simple: if you can do it, you can automate it. At a broad level, if you’re playing Factorio well, it really plays itself. Players are tasked with designing and constructing systems to handle certain aspects of playing the game.

Factorio follows a loose story that sees the player’s character arrive on an alien planet. The goal is to build a spaceship to escape but to achieve that goal you’ll need research and build a wealth of technologies.

In the early stages, players wander about the empty wilderness of this planet looking for resources. Trees to chop down, stone to dig up, coal, iron and copper to mine. Maybe you use the stone to build a furnace, which you fuel with coal to smelt ores into usable material like iron plates. Then you use those materials to craft machines and tools to help you get more resources. At a certain point, you’ll ask yourself why you’re mining the resources by hand. So you craft a few drills to handle it for you. But the drills need fuel, so you build some conveyor belts to carry coal from your coal drill to your iron and copper drills.

Then you realize you’re wasting time carrying resources from drills to furnaces, so you build more conveyor belts to handle that for you. But now you need huge amounts of conveyor belts and building them by hand takes time, so you create a small factory to turn the iron plates into conveyor belts. After all this, you glance at the clock and realize five hours have passed and you really should go to bed.

Everything builds on everything

That progression is ultimately what makes Factorio so interesting, despite the gameplay revolving almost entirely around crafting and management of machines. Everything you build becomes the foundation for the next thing. All the while, you can research new technologies that expand what you can do and build.

For example, it doesn’t take long to research electricity and upgrade your drills from inefficient coal-powered machines to faster electric ones. And with that boost in production, you’ll need to expand your furnace system to process the raw ores into usable materials.

Of course, there’s also the process of building ‘inserters,’ robotic arms that can take items off and place items on conveyor belts. Those become integral for moving things around your expanding factory. But to manufacture those en masse you’ll need circuit boards. To make circuit boards you’ll need copper wire — and lots of it — so you build a factory to turn your copper ore into copper plates which can be refined into wire for use in circuits. It just keeps expanding.

The endless expansion also contributes to the puzzle-like nature of Factorio. One aspect of this is designing production system to fit within the limited space available to you. However, something will eventually go wrong in your factory and you’ll need to go over every conveyor belt, every production line hunting for the culprit. Something as simple as a faulty drill could cascade throughout your factory and bring your progress to a grinding halt. 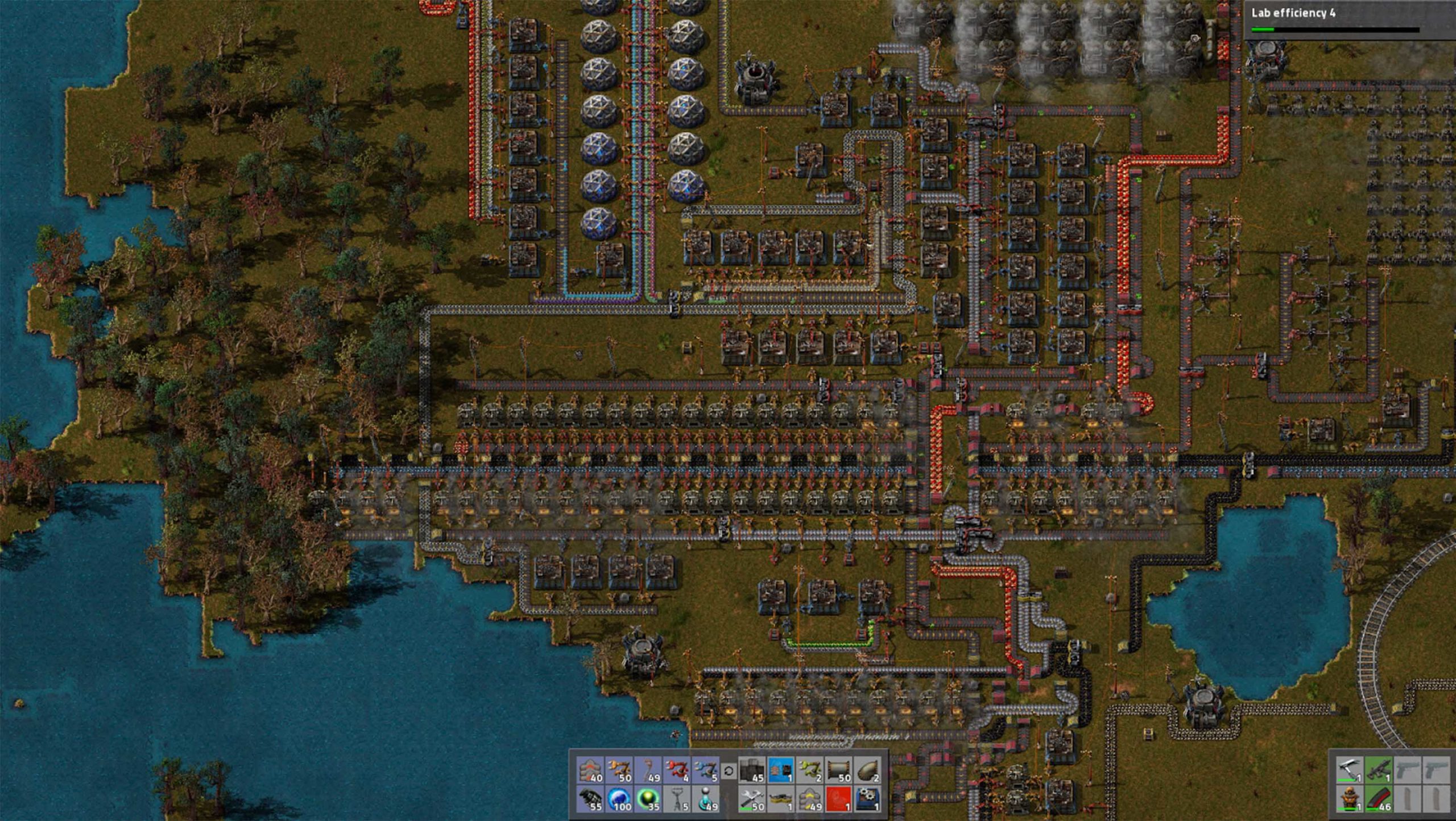 Of course, your intrepid industrialism doesn’t go unnoticed for long. You’re not the only inhabitant of this alien planet and the locals aren’t fans of your noisy factory, pollution and exploitation of the natural resources.

Before long, you’ll find your factory under assault by the natives. If you want to keep production going, you’ll need to upgrade defences. Early on, that could mean crafting some armour plates to protect yourself and upgrading your pistol to a shotgun. However, the longer you stay the more they attack.

In a sense, the game can take on a tower defence-like structure that sees you building walls, turrets and other machines to help protect your factory. But managing your new military might alongside the rest of your factory can be incredibly challenging.

What strikes me most about Factorio is just how well it all works. I’ve logged far more hours in it over the month of April than I would care to admit, and I never once encountered a bug or other game-breaking issue.

Plus, performance is excellent as well. Whether I’m just starting out, or I’m working on my expansive factory, the game runs really well. It may not be the most visually appealing, but it’s easy to overlook when the gameplay is this excellent. Wube Software, the developer behind Factorio, says on its website that “gameplay is the king.” I also can’t say enough about the soundtrack, which fits perfectly with the game’s atmosphere.

Factorio has been in development since 2012 and is set to hit version 1.0 in September 2020. Wube Software has been polishing and optimizing Factorio the whole time, and the quality really shows. Each system works incredibly well, offering a basic simplicity to get you onboard but with hours and hours of play to master. For example, the basic conveyor belt on the surface seems simple. You put items on it, the belt carries them somewhere else. However, by manipulating bends in the belt, positioning and other things, you can deftly control which items end up where on the belt and efficiently deliver multiple products to different parts of the factory.

Plus, if all this seems overly daunting, that’s okay. Factorio has an incredible community of players spread across its official forums and the r/factorio subreddit, many of which are happy to help educate newcomers.

All in all, Factorio is an absolutely incredible game. If you enjoy simulation or management style games, you’ll likely love Factorio. It’s available on Windows, macOS and Linux from Steam as well as the Factorio website for $34.