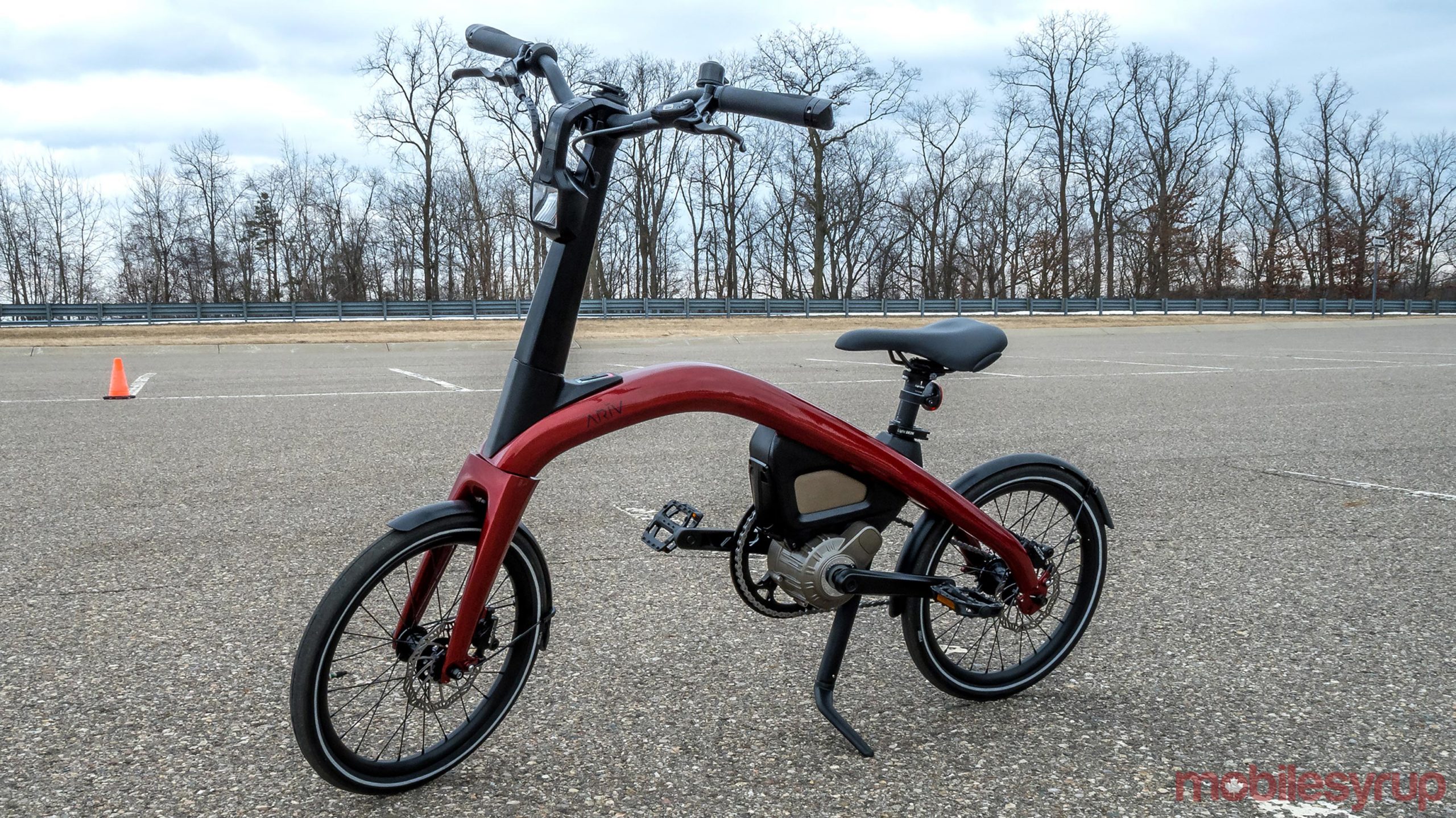 General Motors (GM) is going all in on its electric vehicle strategy but has also worked on other electrification projects that include an e-bike engineered in Canada.

The ARIV Merge and Meld were designed for “first mile, last mile” commuting and are aimed at urban dwellers who may want to supplement their transport needs. Being an e-bike, it has an electric drivetrain inside, but is also a standard bicycle when all the tech is off.

I got some hands-on time with it at a media event in Michigan and learned more about what GM has in mind for its recent foray into a non-automotive product.

The idea for ARIV as a brand, and the e-bike itself, initially came in 2015 when GM’s president, Mark Reuss, visited the company’s facilities in Canada, along with a couple of local universities in Southern Ontario. In short order, he assigned GM engineers in Canada a project that ultimately became the Merge and Meld.

The plan was to build an e-bike that followed design thinking principles, which is currently a popular methodology for trying to understand what users want in a product. Engineers and designers went to places as far away as Amsterdam, San Francisco and India to learn how bikes fit into daily commutes there before drawing up designs. 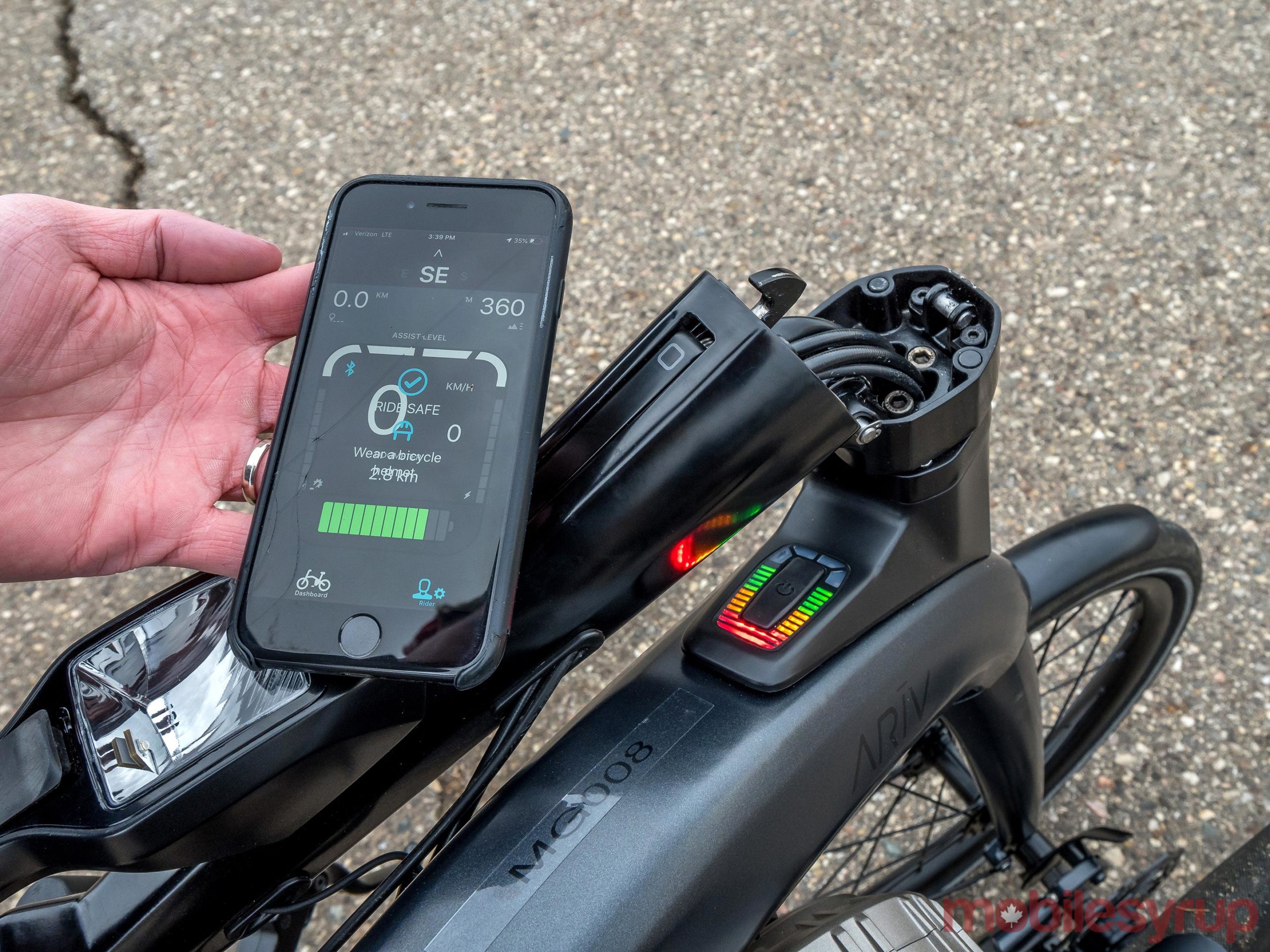 It’s a big reason why the Merge folds without any tools, reducing its footprint enough to make storage and transport easier to manage. Various cities have different rules on how and when trains or buses allow passengers to bring their bicycles. The Merge is technically no larger than a small travel suitcase in its folded state, putting it in something of a grey area.

There are no visible wires or cables, save for the ones that appear at the point where the Merge’s frame folds open. The Meld, on the other hand, doesn’t fold at all. It’s the only difference between the two models, since both also come in the only two colour options available: black and red.

“This is an aluminum bike intended for first mile/last mile, equipped with disc brakes that you don’t need to upgrade, and hydraulic braking that doesn’t require traditional cables. Pretty much everything is nicely integrated in the bike,” says Terry Ostan, Senior Manager of Innovation and Advanced Technologies, in an interview with MobileSyrup.

The onboard lithium-ion battery can deliver up to 64km of range on a single charge — assuming you are only using it on the lowest assistance setting. It gets progressively lower the higher you go. It also takes about 3.5 hours to fully charge, and while the bike uses a proprietary plug, any standard power outlet will do on the other end.

The integrated display on the frame indicates battery and assistance levels. There are also LED front and rear safety lights, both with integrated batteries that use their own USB recharging ports.

A Quad Lock mount on the handlebars is specifically made to attach a smartphone to the e-bike, but it’s not possible to charge it through the onboard battery. It will trickle enough to keep the phone’s charge steady without topping it up at all. However, that is contingent on not running apps in the background. Technically, riders could use a mapping app to navigate, paired with wireless earbuds to hear turn-by-turn directions, but it seems unlikely the battery wouldn’t lose at least some of its charge at that point. 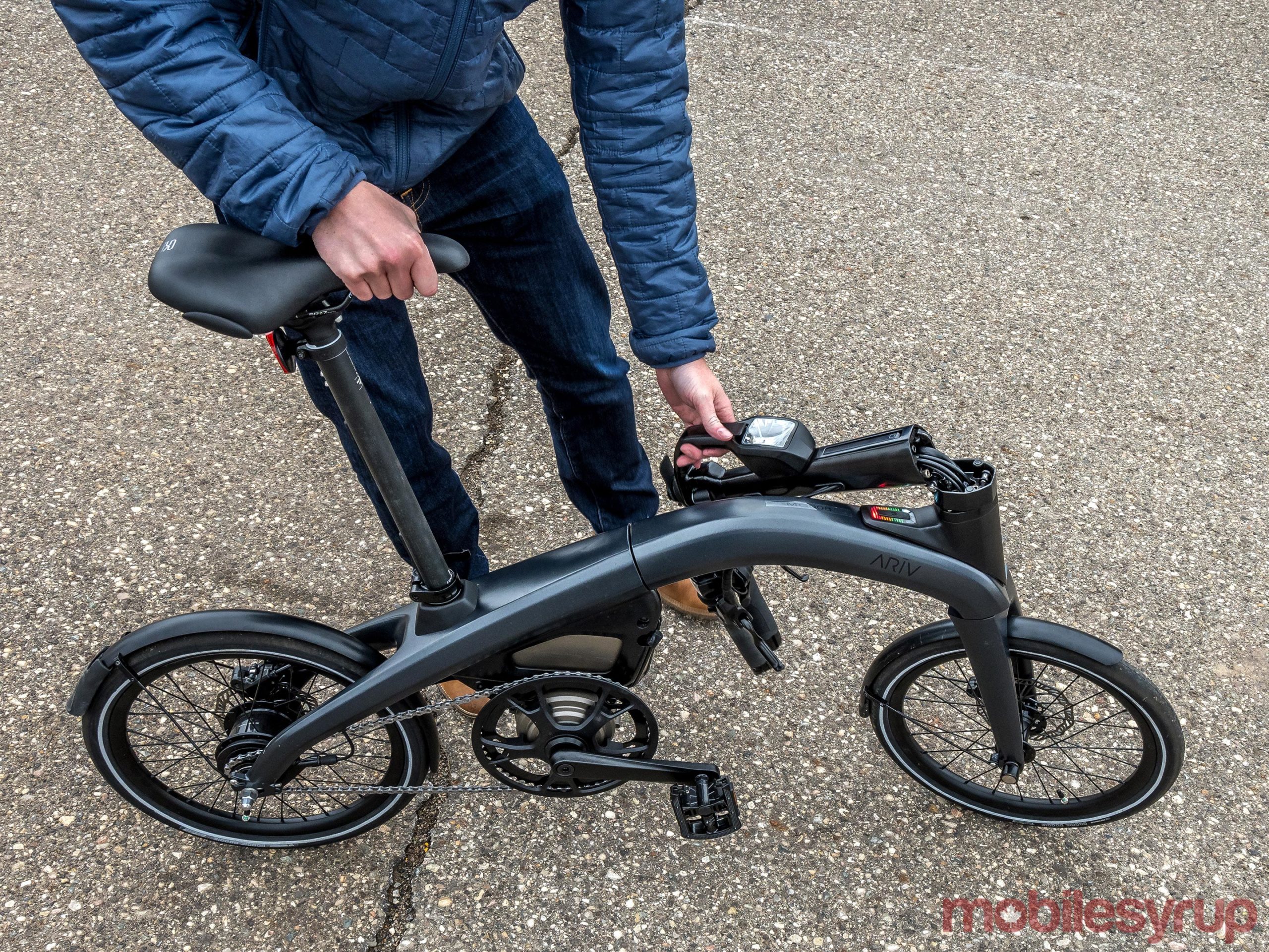 Riders can use the ARIV app (iOS and Android) that connects to the e-bike via Bluetooth. It’s not especially deep, yet does offer insight in key metrics, like speed, distance, battery life, motor assist level, elevation and trip odometer. It wasn’t ready to see at the time, but a new feature GM will be adding to the app is a mode using a proprietary algorithm to help riders get to a destination without sweating.

“It’s kind of like your dashboard,” says Ostan. “When you buy the bike you get a mount you can put on the back of your phone, and so you essentially just click it in place. The connectivity is very comprehensive between the bike and phone, and can also act as your compass.”

I figure any assisted bicycle is going to feel smooth, so I can’t say it’s a unique trait, in this instance, but it didn’t disappoint. When the motor kicks in, pedaling naturally encounters less resistance. Even at the lowest setting, it felt like a decent mix of kinetic effort and machine help to ride along at a decent pace.

The 16 x 1 3/8-inch alloy rims give the e-bike a lower centre of gravity, especially for someone tall like me, but it didn’t feel awkward to ride after a few minutes. If anything, it was the assistance that took more getting used to. Riding it that way felt less like coasting on momentum, as per any cycling experience, and more like being propelled forward.

Its top speed is 25km/h, adhering to regulations that don’t let it go higher. It can only go that fast on its own at the highest assistance level, where you would just need to pedal leisurely to help out, if at all. It’s one reason why the brake rotors are larger than usual, given that slowing down or stopping needs more power. I only tried the highest setting briefly, and found it overkill for the small makeshift track I rode it on. But I could see the appeal for getting around quickly in a city, especially in cooler weather. 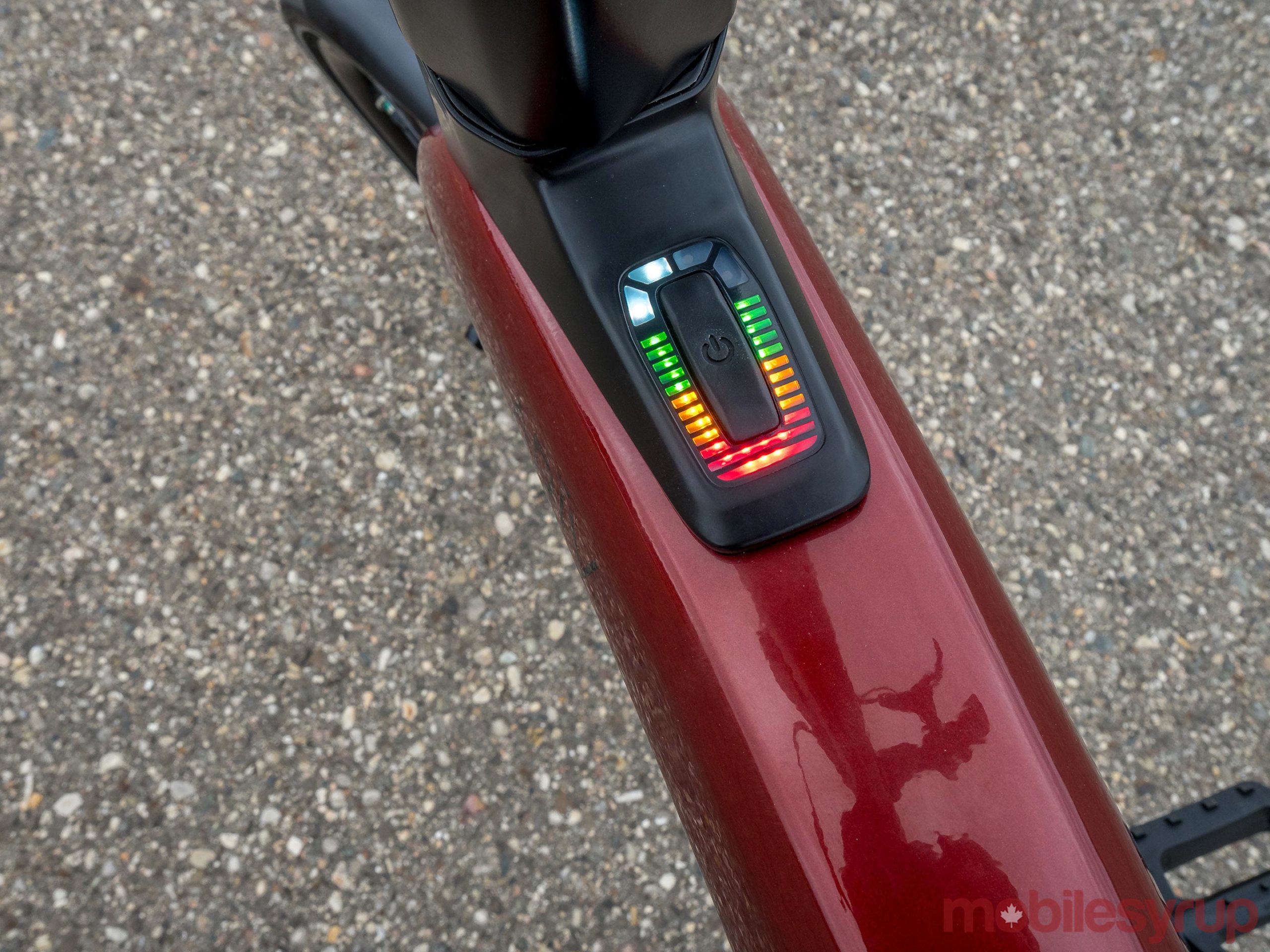 Road conditions are another factor, as many across Canada can attest, with potholes and a lack of bicycle lanes as potential pitfalls. Ostan didn’t clarify any particular reasons why the Merge and Meld aren’t available in Canada yet, despite so much work on them done in the country.

As of this report, Belgium, Germany and the Netherlands are the only three countries where the e-bikes are currently available. They also don’t come cheap. At between €2,700 and €3,400 (about $4,200 to $5,300 CAD) for the Meld and Merge, respectively, these e-bikes come at a premium. It begs the question: who will repair them if anything happens to them?

Ostan says GM has worked with a company called Live-cycle in Europe that offers mobile repair services. When these e-bikes come to North America, the plan would be to ensure bike shops have some know-how to repair them, since GM offers no servicing for them at any dealerships.

The proprietary algorithm that would ostensibly help ensure a sweat-free riding experience is one that GM looks to bring out sooner than later. Since many current owners use it to commute to and from work, or at least to and from wherever they parked before taking a train or public transit, maintaining one’s work attire is part of the motivation.

“It all depends on what you want and what you need. If you’re on your way to work wearing a business suit or blazer and you’ve just put on a freshly-ironed shirt, you want to show up at work nice and fresh, and so, you would want to have the bike assisting you as much as possible,” says Ostan.

“But then on the way home, where are having a hard time finding time for the gym, they can use the lowest assistance level and kind of incorporate a workout on the way home. That’s why we have a number of levels.”