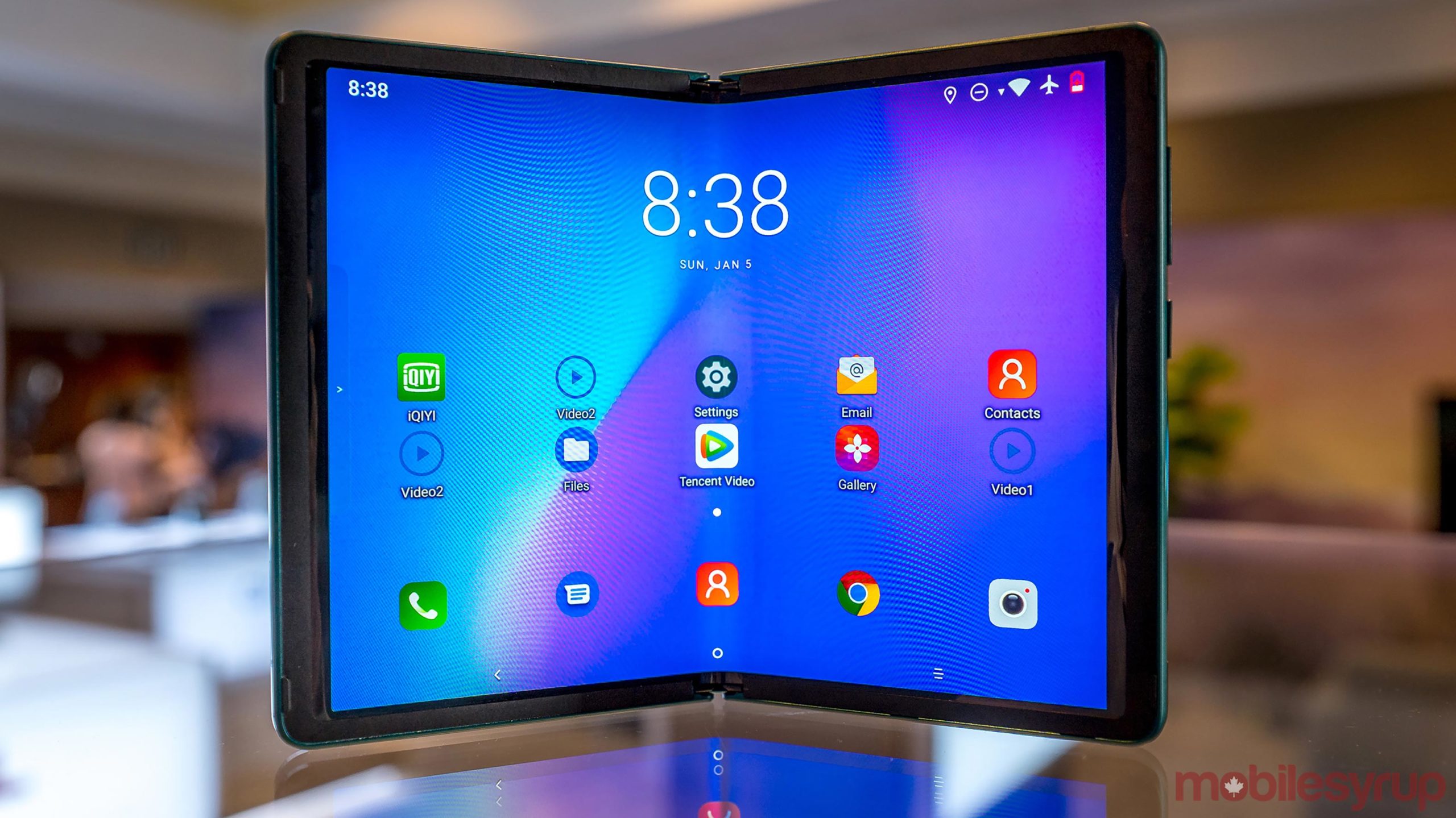 TCL has plans to step up its smartphone game, but not beyond the mid-range where it currently sits in the North American market.

Its latest devices were available to check out on the eve of CES 2020 in Las Vegas, and they included some conceptual ideas the Chinese brand is working on. The most eye-catching was the foldable phone that, while still very raw in practice, offers a glimpse into what it has in mind for the near future. 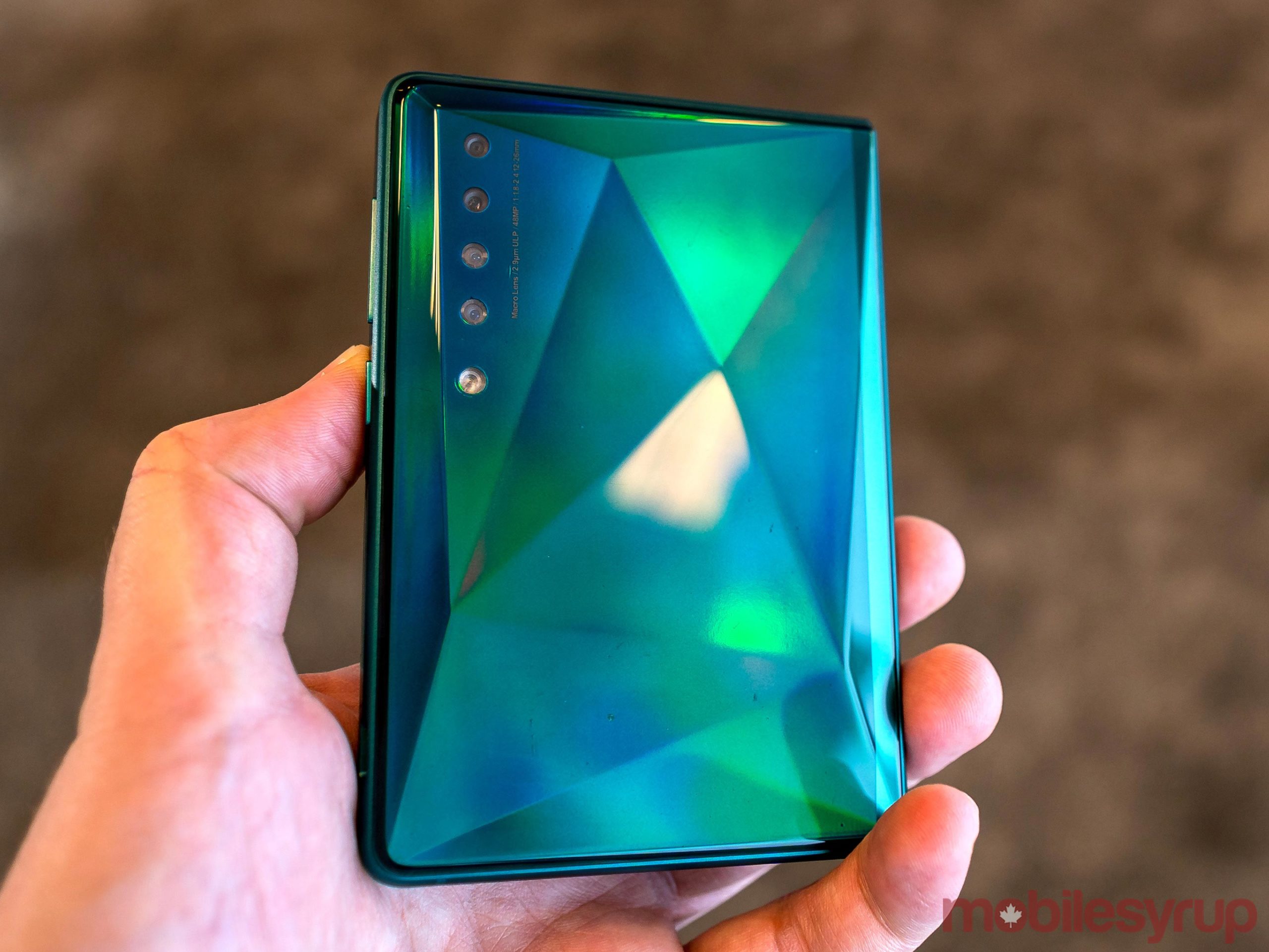 The concept phone is a clamshell that only has a 7.2-inch screen on the inside. There’s no external display like Samsung’s Galaxy Fold, but this prototype did feature a beautifully contoured casing that was available in royal blue and teal colours. It also revealed a four-camera array with an LED flash along the rear with what appeared to be a 48-megapixel primary shooter.

Folded out, the screen was vibrant, with a crease down the middle that appeared sturdy after opening and closing it a few times. It wasn’t the smoothest operation, owing to the fact this is more prototype than something destined for store shelves.

TCL reps were consistent in noting that there are dozens of form factors and designs the company is playing around with. The specs are also still set to be determined, so while I saw the array in the back with the 48-megapixel shooter, it’s unclear if that’s actually what a final product would have.

The hinge did close the device completely, meaning there was no gap between the two halves of the display. With a 2K resolution screen, the vibrancy and sharpness were reasonably good, though TCL will need to figure out how to fold it up without accidentally tapping something along the way. Almost every time it closed, it inadvertently turned the flashlight on. It is a TCL-manufactured panel, which is why the company says it can make good phones for a lower price than competitors. Time will tell if this ends up being true.

It is an interesting concept in the way it’s designed, but it was hard to gauge how Android would run on it. Any software I saw was rudimentary as far as optimization for foldable phones is concerned. The home screen looked okay, but again, I take all of it with a grain of salt because it’s unlikely this will be the final design whenever TCL launches a foldable handset. 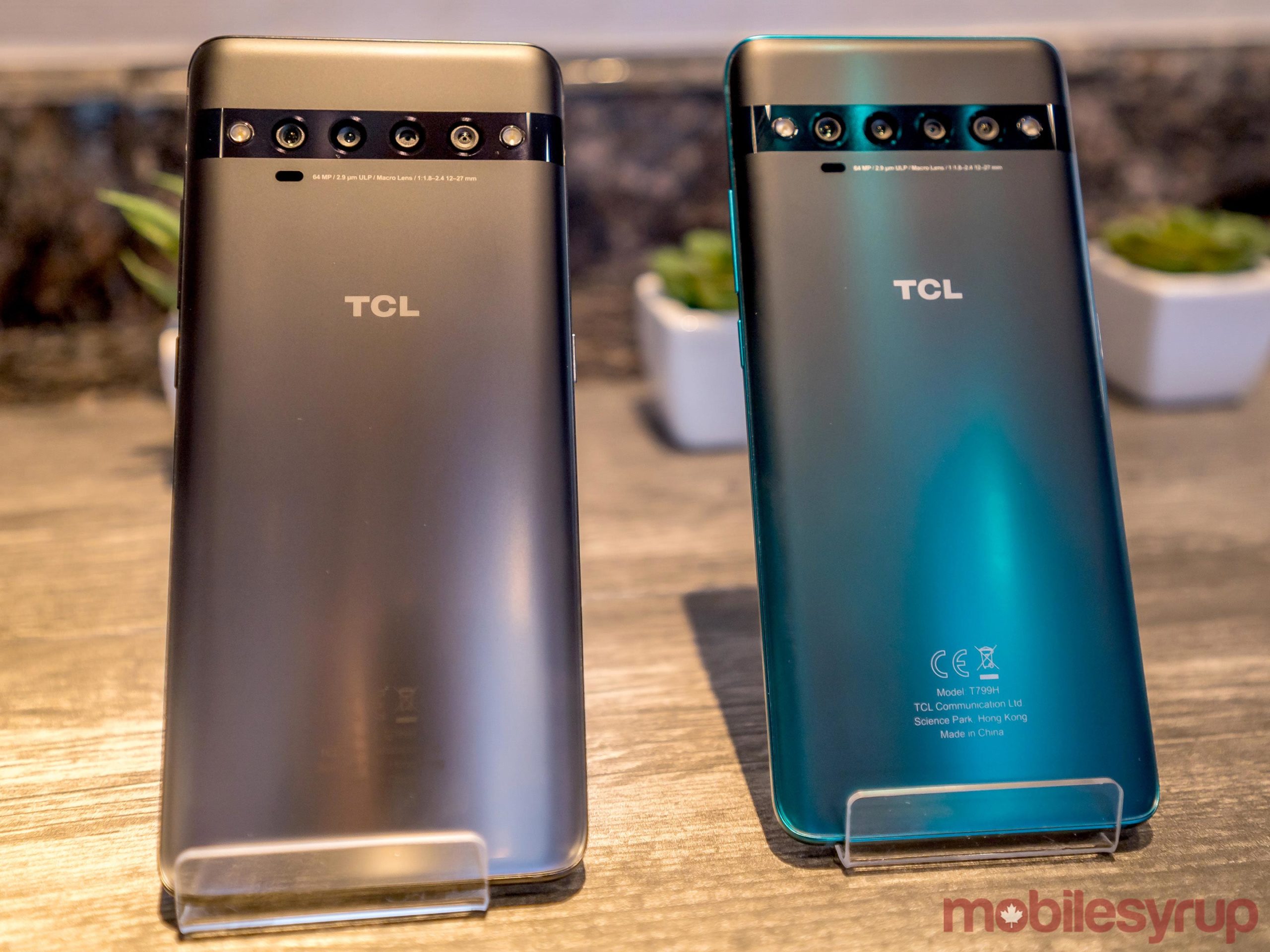 What is coming to Canada this year is a duo of phones TCL plans to launch. The TCL 10 Pro and TCL 10L look very similar, with the same screen size, yet different materials on the back — matte plastic on the 10 Pro, glossy on the 10L.

Though mum on specs and details, there were some things I picked up on. The 10 Pro will have an in-screen fingerprint scanner, except I’m not sure which type it will be. The 10L has an optical sensor on the back. Both will have TCL’s AMOLED display coming straight from the company’s CSOT division that makes the panels for its TVs.

There is a quad-camera array on these phones as well. The one thing that caught my eye was a 65-megapixel shooter noted on the rear. I’m not sure whether that’s for one lens or for a combination of lenses, but in any case, reps did say they will have the company’s Nxtision technology, which it says is a “proprietary advanced display optimization and camera technology” that will enliven colour, clarity and contrast for “an elevated camera experience.” I didn’t get a chance to shoot any photos with it, so I have no idea. 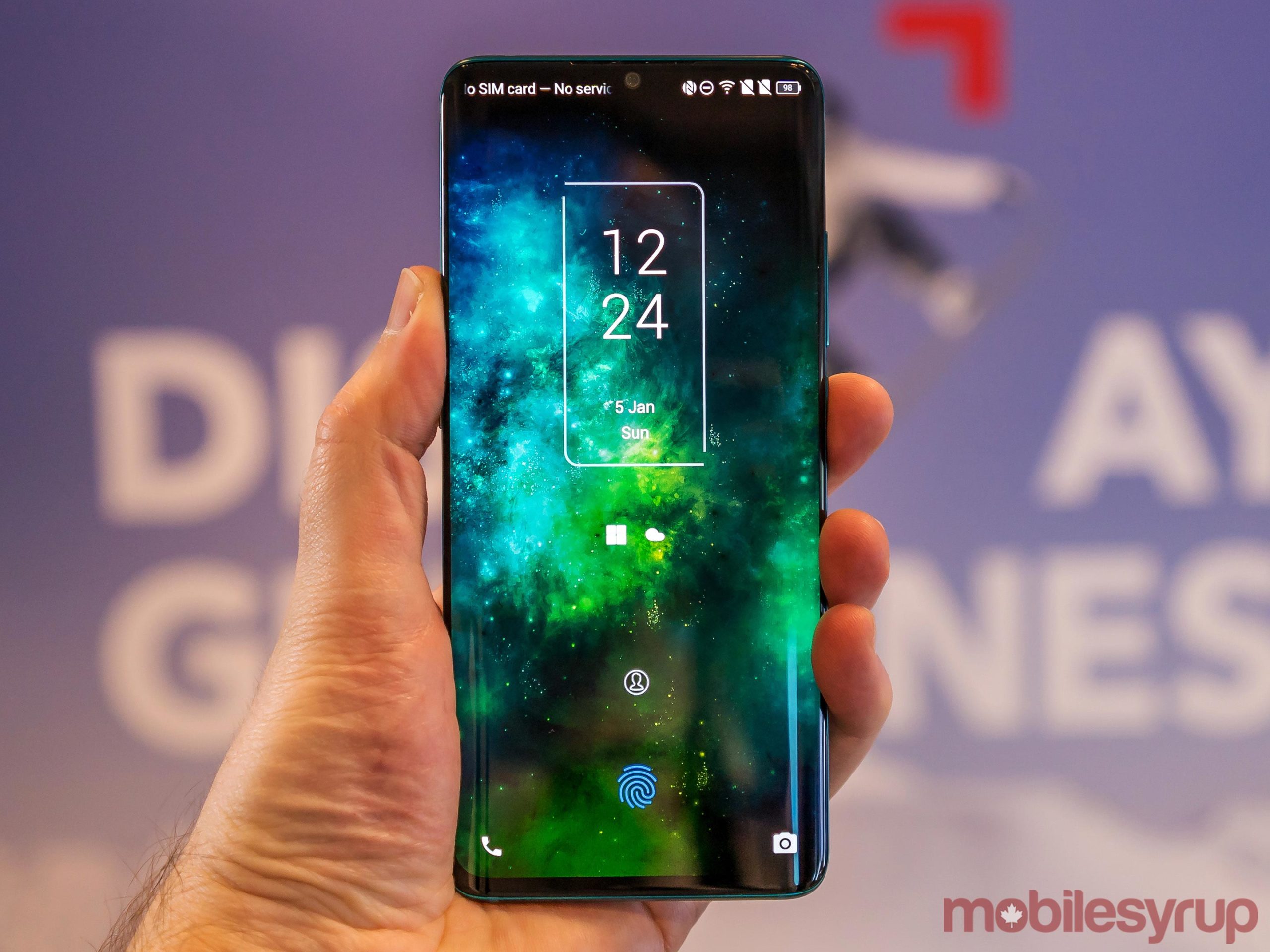 The combination of a shorter supply chain with more in-house components is part of the reason why these devices are expected to launch for under $500 U.S. this year (roughly $650 CAD). Canada is expected to be part of that launch in the United States, but more information will come to light at Mobile World Congress (MWC) next month.

There also was a 5G variant of the phone called the TCL 10 5G. As of now, that device is earmarked for markets already deploying the next-generation wireless standard. However, it’s likely going to come in different iterations or variants, depending on the market and carriers involved. When I asked about Canadian carriers who might be involved, reps chose not to comment. 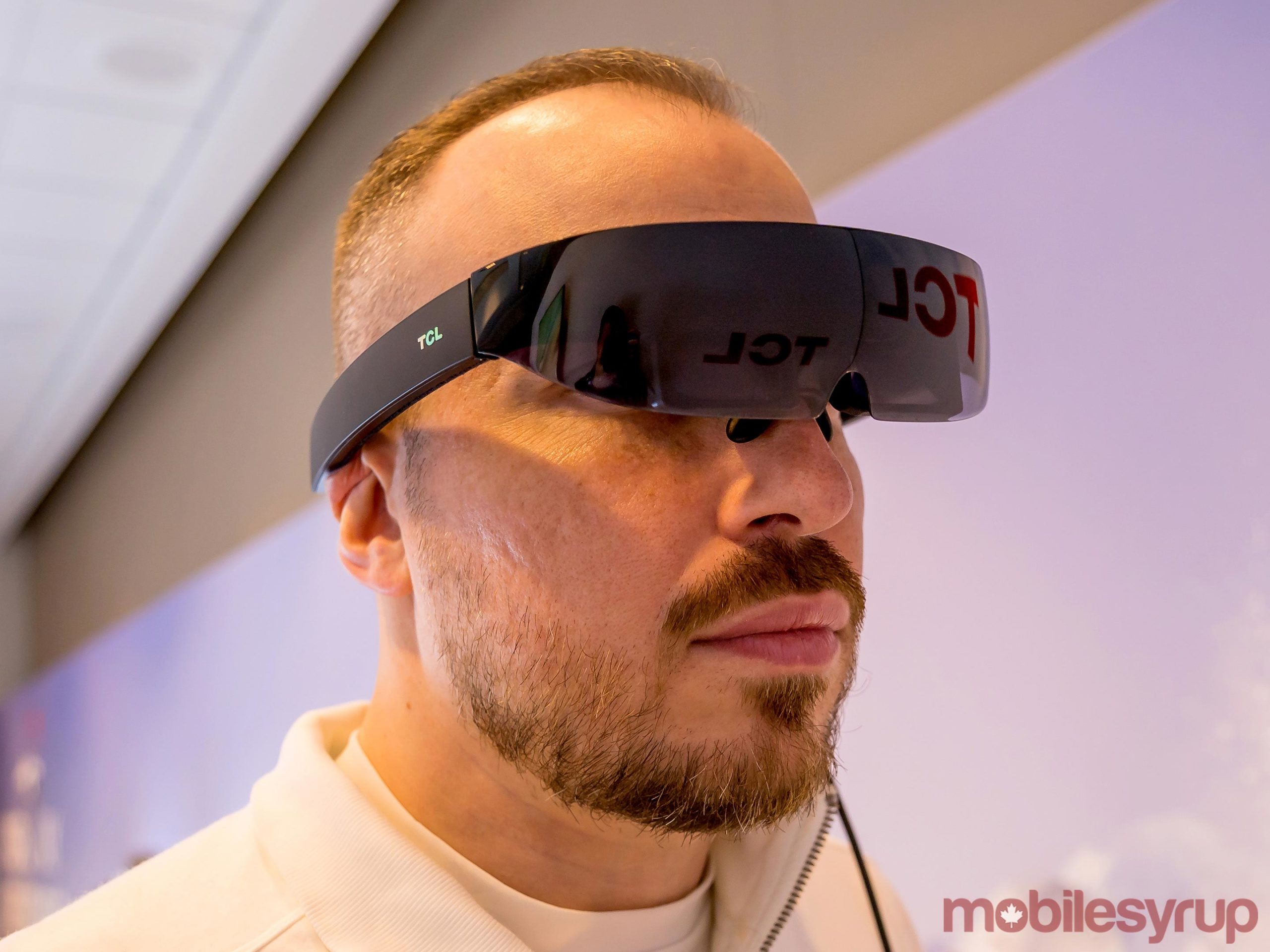 Somewhat surprisingly, TCL also showed a concept set of glasses that are effectively a wearable projector. The gist is that you plug the glasses into a phone and it will display content to see through your eyes only. The idea behind it isn’t new — I had tested glasses doing the same thing several years ago from a company called Vuzix.

At any rate, I navigated a small menu with my head, turning it and holding when I wanted to select something to play or stop. It was a basic test, as there was no way to try it with streaming apps or something like YouTube, for example.

Image quality was good, though, and it was obvious this isn’t meant to be a virtual reality (VR) or augmented reality (AR) headset. The peripheral vision is still there, so it emulates watching a screen in front of you, rather than shutting you out of your physical surroundings.

I didn’t get too many details on what the content plan is. Gaming seems like an obvious one, though I would think the best use case would be with a paired controller to negate using touch controls on the phone itself. There was some sound coming out of the built-in headphones, but I suspect TCL will make ample room for wearers to listen using whichever pair they like.

It’s still very much in the concept stage, but if it were to launch, it probably wouldn’t be prohibitively expensive. Look for more to come from TCL when they officially launch certain mobile devices at MWC in Barcelona.