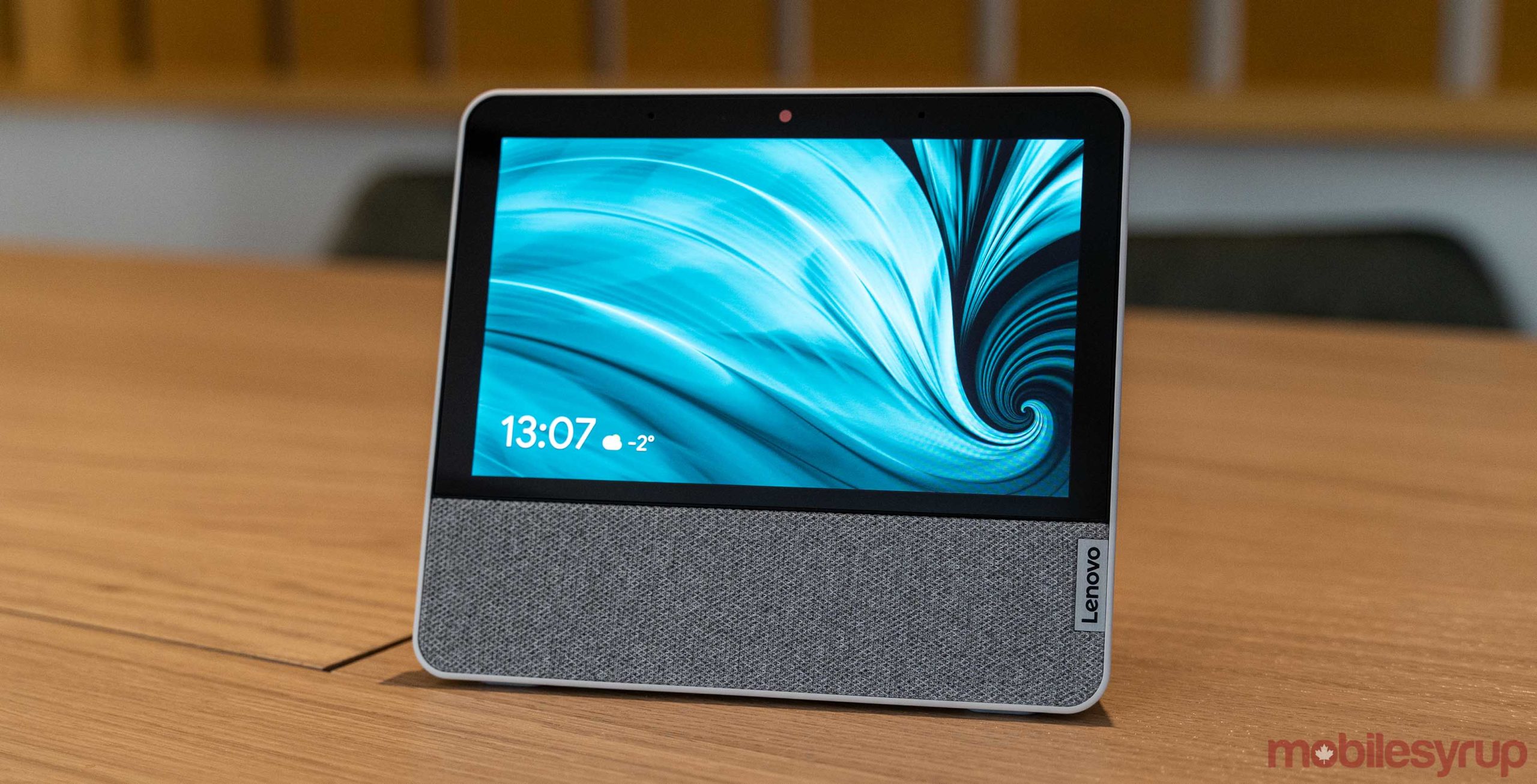 When it comes to Google Assistant-powered smart displays, consumers have several options these days. From Google’s positively massive Nest Hub Max to the minuscule Lenovo Smart Clock, there are many choices.

However, Lenovo’s latest smart display may just be the best device for most people. The Smart Display 7 offers up a middle ground between the giant Nest Hub Max and Lenovo Smart Display 10 and the tiny Smart Clock.

Of course, the Smart Display 7 — named for its 7-inch display — is in direct competition with Google’s other smart display, the similarly sized Nest Hub.

While the Nest Hub is excellent, the Smart Display 7 matches or exceeds it in several areas. Lenovo may be the clear value option and the best way to go if you want a smart display that can (almost) do it all.

Standard hardware with no surprises 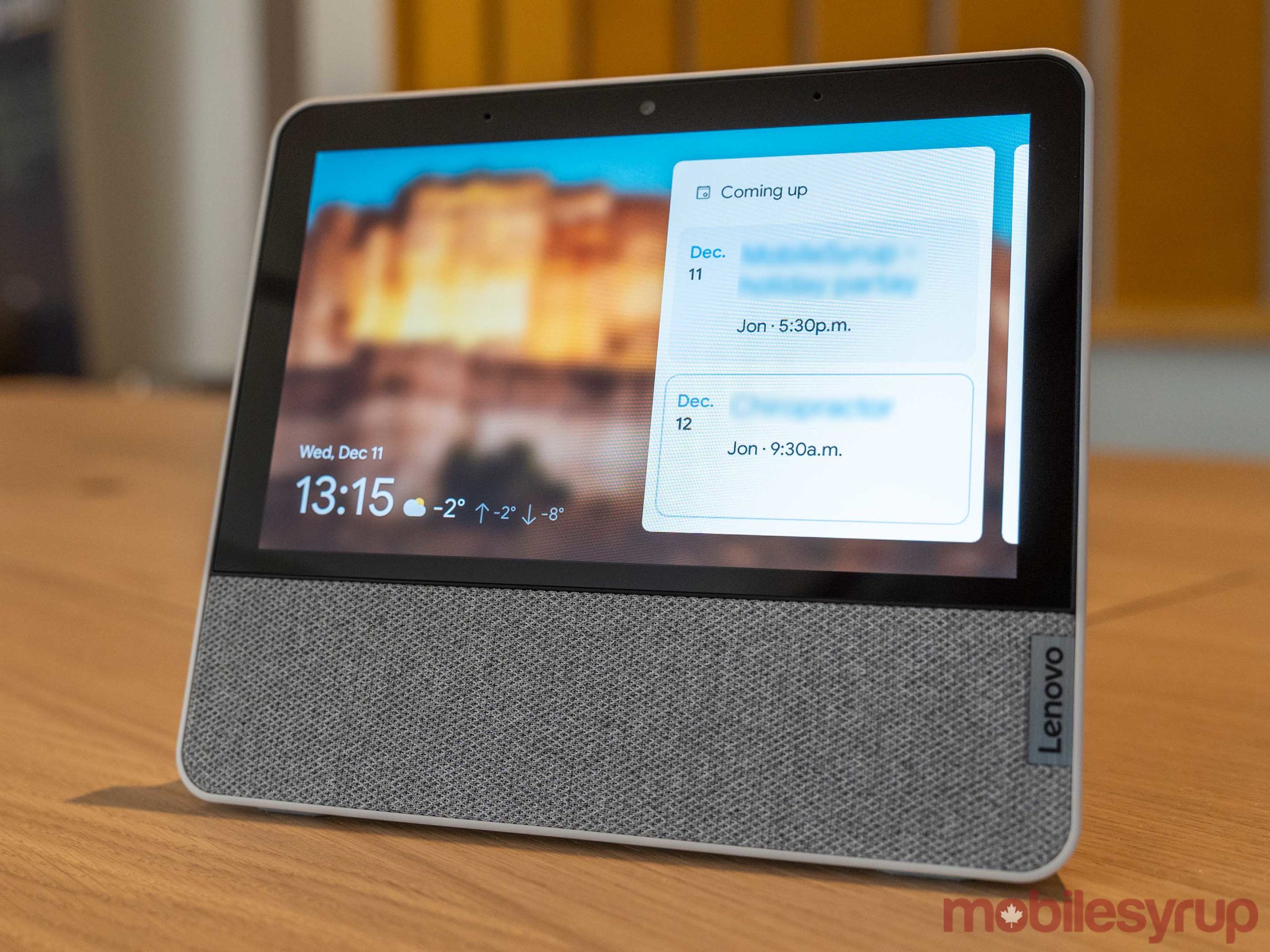 Smart displays have never really been about the specs, but that doesn’t mean hardware isn’t important. Sure, you’re not getting a top of the line processor — the Smart Display 7 sports a 1.5GHz MediaTek 8167S — but it’s more than enough to get the job done without any lag or weird slowdowns.

The screen and speakers are far more important, as those are the mediums you’ll interact with the most when using the device.

In the case of the screen, it’s fine but it certainly isn’t the best display I’ve ever seen. Set up a Smart Display 7 next to a Nest Hub and you’ll see colours don’t pop as much and its resolution isn’t great. Overall, I’d describe the screen featured in the review unit Lenovo sent me as washed out.

However, on its own, you probably won’t notice this as much. Realistically, you also don’t need a super high-resolution screen, but it would have been nice to see something better than the 1024 x 600 resolution in the Lenovo display. 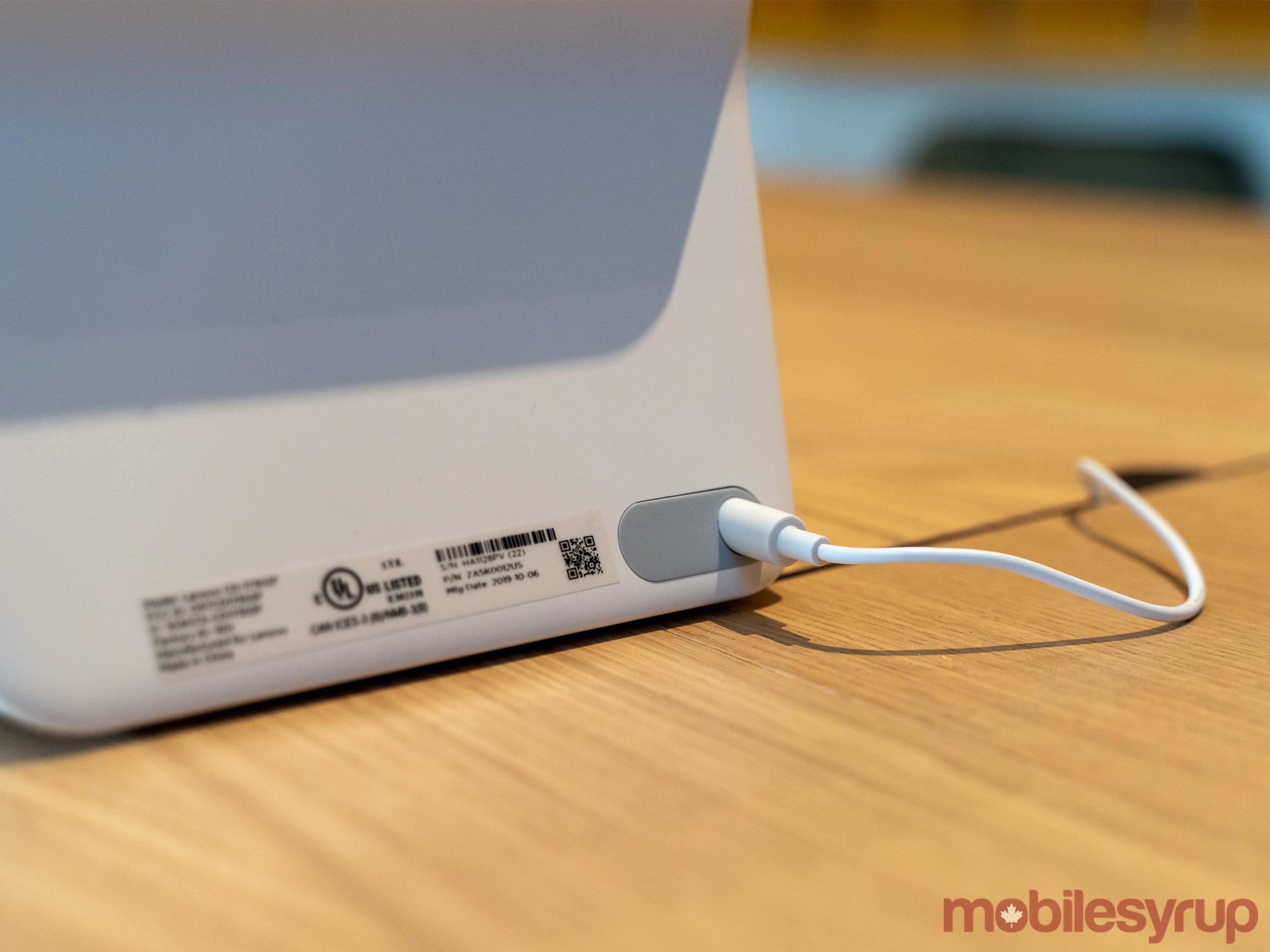 On the upside, Lenovo did include a colour tone sensor that adjusts the display’s colour temperature based on the lighting in a room. It’s a welcome feature that helps the screen blend in better with the ambience.

The speakers are passable as well. I’d say they sound pretty similar to the Nest Hub — not noticeably better or worse. When interacting with the device, responses are clear and sound fine. The speakers don’t perform as well when listening to music or watching video, but it’s far from the worst audio experience I’ve had.

Ultimately, if you want an excellent speaker, you should look elsewhere. A Sonos One may be a better option for you since it offers both great sound and access to Google Assistant and Alexa (although it lacks the smart display part). For what it is, the Smart Display 7 works well.

Despite middling hardware, the Lenovo Smart Display 7 stands out with its design. It manages to offer the same size experience as the Nest Hub, but with a more unique design. While I’m not a fan of stacking the screen on top of the speakers like the Display 7 does (I feel it makes the device seem oddly tall), the design helps keep the display higher and unobstructed by other things on your table.

The Display 7 takes up roughly the same amount of space as the Nest Hub but, thanks to the taller design, is more visible.

The placement makes it much easier to adjust the volume or mute the mic without having to fumble around the back of the device.

The Smart Display 7 does all this. I can toggle the mic or camera independently, which means I can keep the camera off but still interact with the display with my voice. Plus, when you disable the camera, a small piece of orange plastic covers over it, which makes it easy to see at a glance. 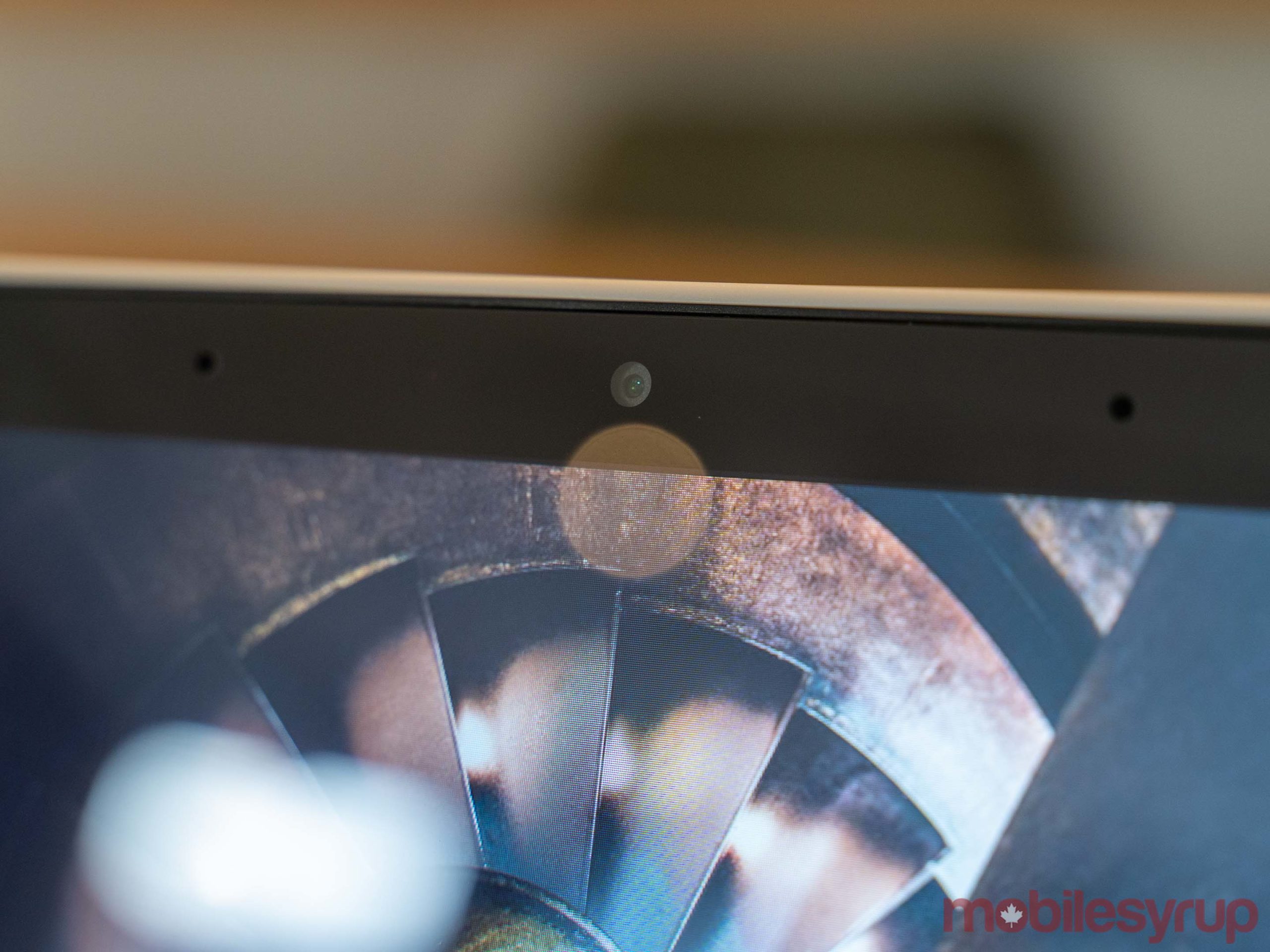 Speaking of the camera, Lenovo’s decision to include it is one of the company’s best. Aside from the Nest Hub Max, no other Assistant-powered smart display offers a camera. It’s arguably the biggest leg-up the Smart Display 7 has on its closest competition.

If you’re trying to pick between the Nest Hub and the Smart Display, the camera will be that deciding factor. The privacy-conscious may opt for the Nest Hub, but anyone who enjoys video chatting with Google Duo will welcome the camera.

Unfortunately, it’s only a 2-megapixel sensor, but that works fine for video chats. 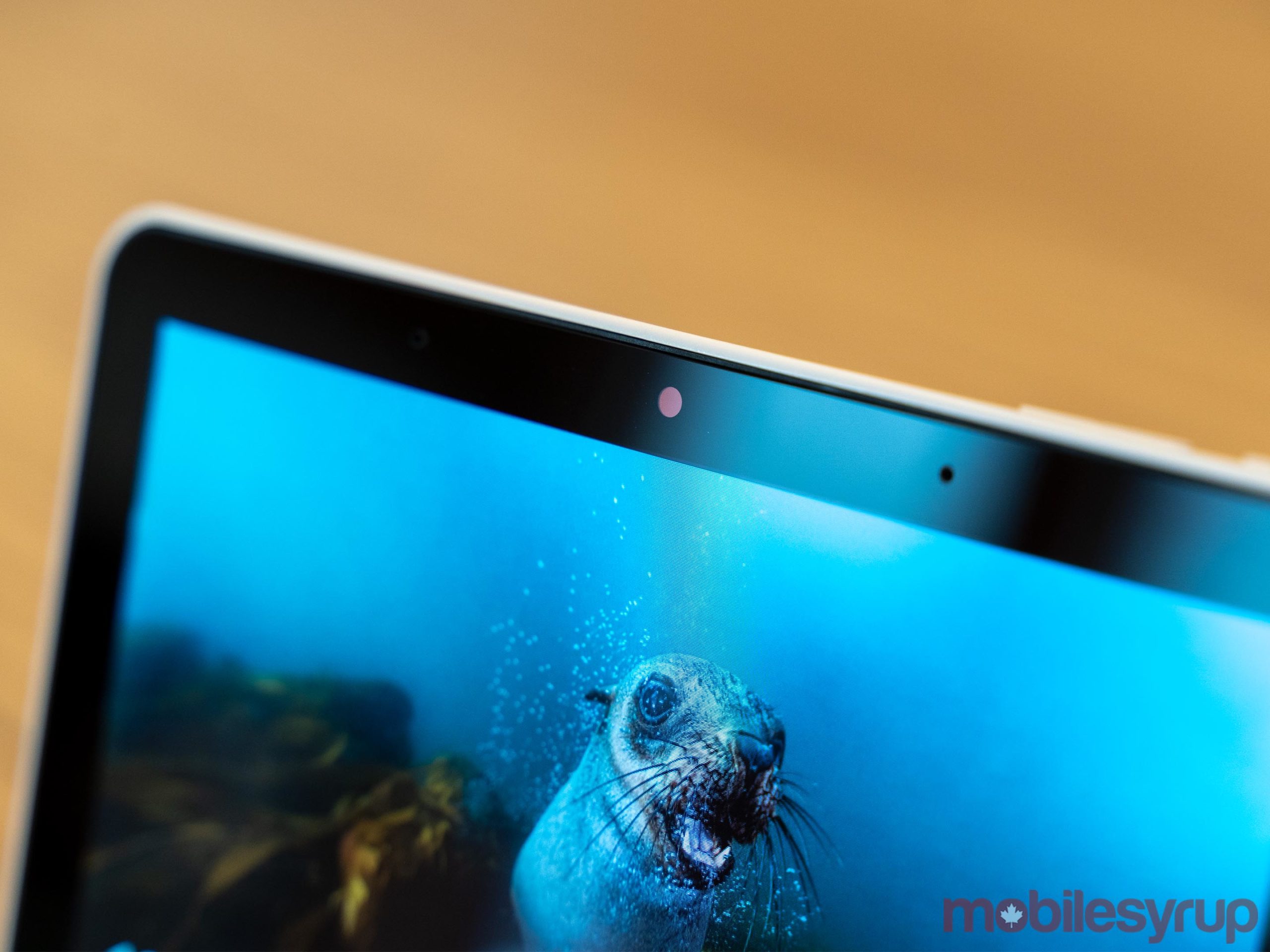 The other major misstep with the camera is Lenovo didn’t include a Face Match option like the Nest Hub Max. One of my favourite parts of Google’s big smart display is that it recognizes me and shows me upcoming calendar updates, commute details and more — no interaction required.

I would have liked to see a similar feature on the Smart Display 7, but it’s not a make-or-break for me.

Further, the Smart Display 7 doesn’t offer Nest integration like the Hub Max. While that’s also not a deal-breaking omission, Nest integration and Face Match really sold the camera for me on the Nest Hub Max. Without them, the Display 7’s only justification for the camera is Duo video calls. If you don’t make many of those, the camera may not offer you much value. 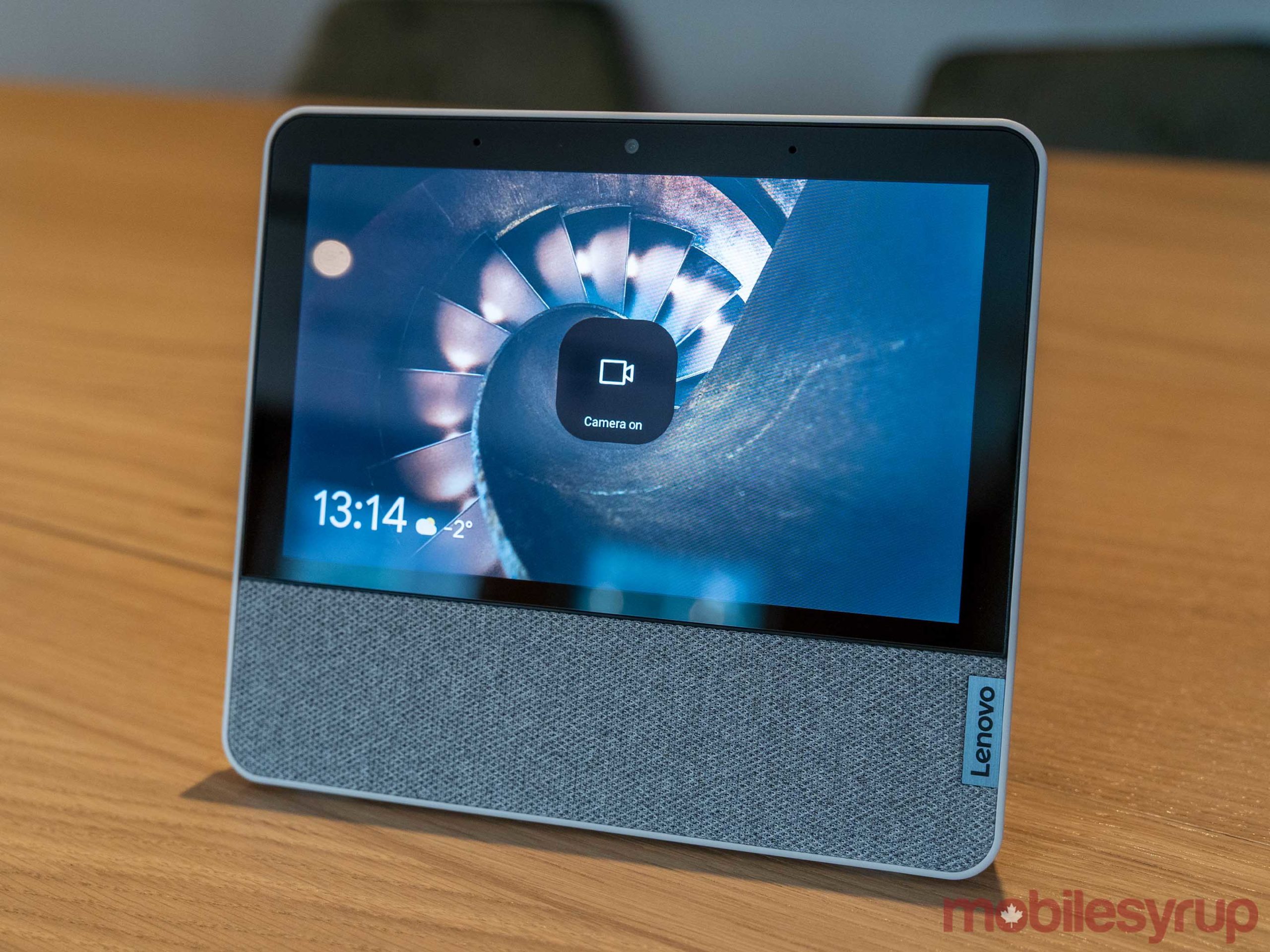 When it comes to software, there’s little new here. It’s Google Assistant on a smart device with a screen — it works exactly as you’d expect. Ask it questions and get answers accompanied by details on the display. Or, play YouTube videos or Spotify — it’s the usual.

This isn’t a bad thing, though. Google has done a remarkable job keeping its smart speaker and display operating system consistent across devices, unlike Android, which is fragmented and can differ wildly from phone to phone.

Ultimately, it means that if you come to the Smart Display 7 from another Assistant-powered smart device, it’ll be a familiar experience and you won’t need to learn anything new. 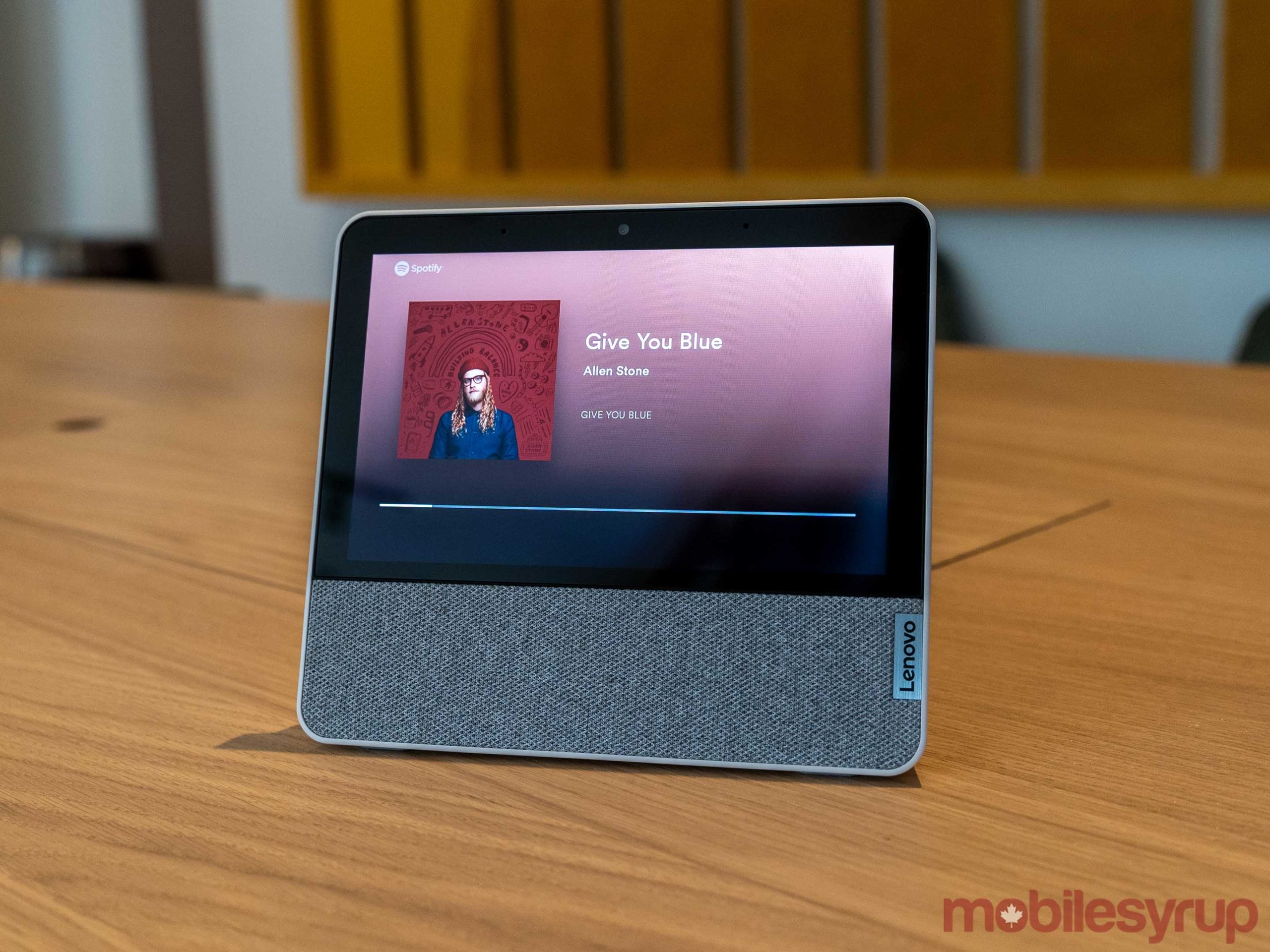 That said, there are a few minor differences I noted in my time with the review unit. First and foremost, the screen doesn’t dim to the same degree as the Nest Hub. Since I swapped out the Nest Hub I used on my bedside table for the Smart Display 7 during the review, I found it much brighter at night. It’s not clear if this is a hardware issue or a software one.

The Smart Display 7 also had a couple odd bugs that I’ve not experienced on other smart displays. First up, the wallpaper would sometimes not appear, whether I was using Google Photos to put my pictures on the display or had the default pictures cycling through. About once every few days, the display would just have a black screen instead of a wallpaper.

The other bug I came across was when I snoozed the alarm multiple times, the device would sometimes just cancel the alarm entirely. This only happened a few times and ultimately wasn’t a deal-breaker either. 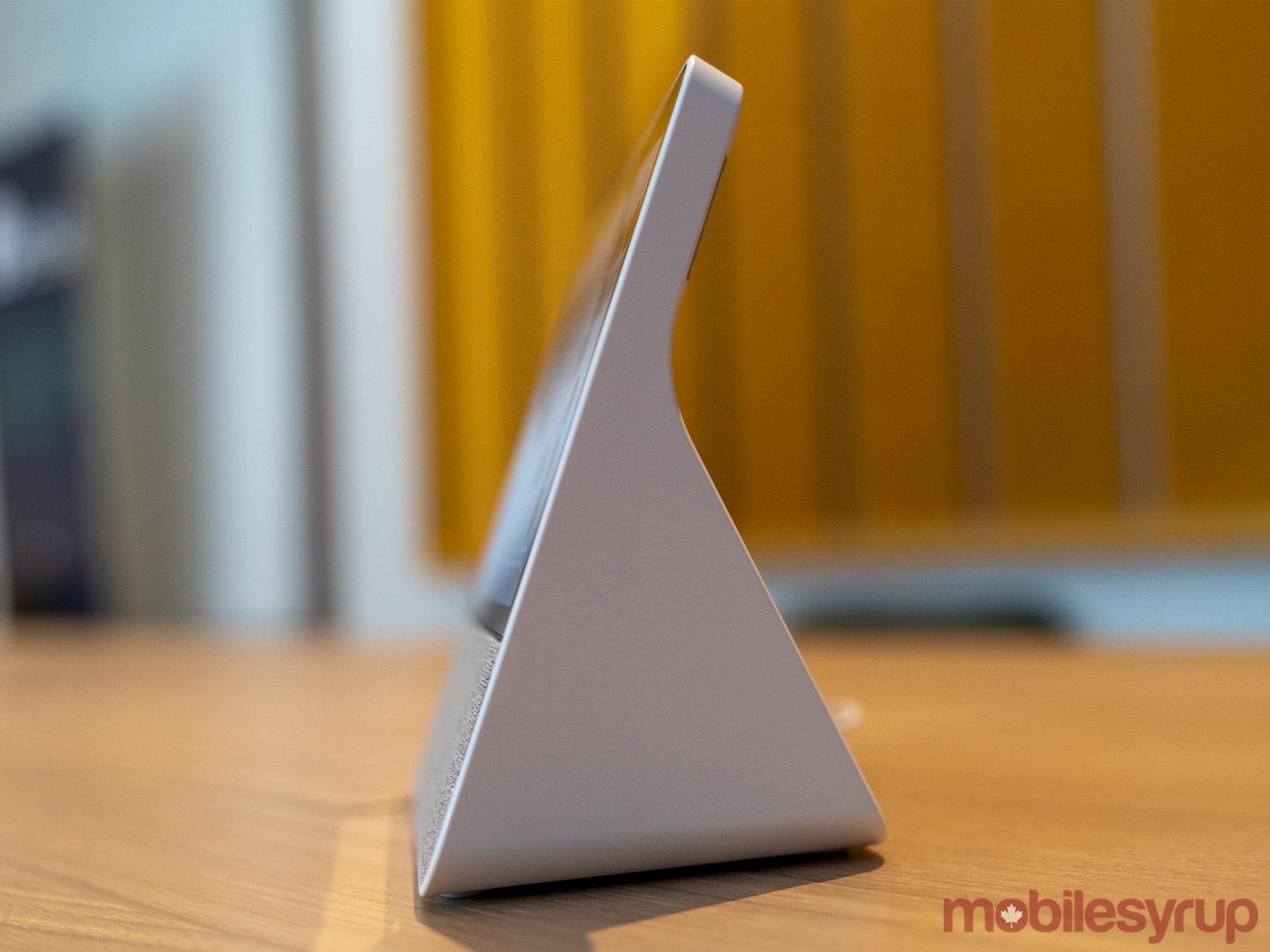 Bugs and less-than-stellar display aside, the Lenovo Smart Display is an excellent option for those looking to get a fully-featured smart display without breaking the bank.

Specifically, the Lenovo Smart Display 7 offers up a nearly identical experience to that of Google’s own Nest Hub, but bests it in a few key areas — namely with the addition of a camera for video calls and with a taller, more interesting design. Plus, thoughtful button placement makes the Display 7 easier to use.

Unfortunately, it’s hard to recommend the Smart Display 7 to Canadians because at the moment, it’s difficult to buy it. Currently, the speaker isn’t available on Lenovo’s Canadian website or its U.S. site. In fact, the only place I could find it was a U.S. retailer called B&H which sold it for $129.99 USD (about $144.18 CAD). Granted, at the time it was on sale for $99. That makes it the same price as Google’s Nest Hub in the U.S.

Lenovo confirmed to MobileSyrup that B&H was currently the only place to buy the Display 7, but it would come to the company’s website “within the coming weeks.” You can purchase it through B&H if you don’t want to wait, as the retailer offers free shipping to Canada on orders over $99 USD.

However, the real issue is that price parity between the Smart Display 7 and the Nest Hub makes picking one a hard choice. While I personally prefer the Nest Hub’s display to the Display 7’s camera since I don’t do many video calls, the design makes it a much better fit for my home.

What works for me won’t work for everyone, though. If having a camera is important to you and you want a stylish device to fit in with your home, Lenovo’s Smart Display 7 is an excellent choice if you can get your hands on it. If not, the Nest Hub will work well in most spaces and offers a superior display in place of a camera. However, if you’ve got the money, the Nest Hub Max has the best of both worlds (although it’s not compact by any stretch).

"Price parity between the Smart Display 7 and the Nest Hub makes choosing one hard, but they're so similar, you'll be happy either way."