Is either speaker better than Google's Nest Hub? 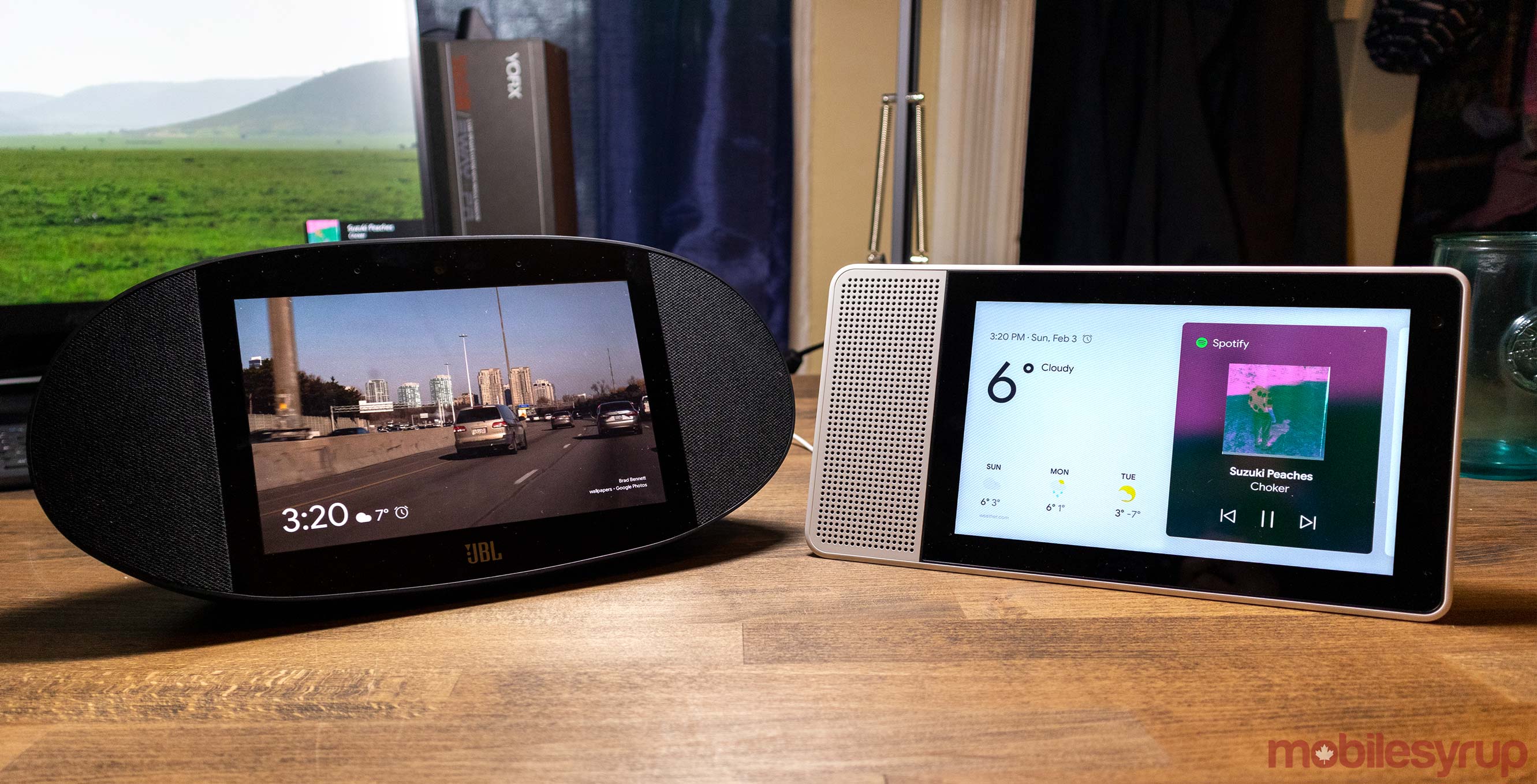 Since Google is bringing the Nest Hub to Canada, we’ve taken an in-depth look at the other two Google Assistant-based smart displays available north of the U.S. border.

They both function the same as Google’s Nest Hub, though Google’s Smart Display runs a modified version of the Google Cast software. As a result, even though both versions of the software look and act the same, they aren’t.

To start, I need to explain what adding a screen to a smart-speaker brings to the table.

What a Google smart display can do for you 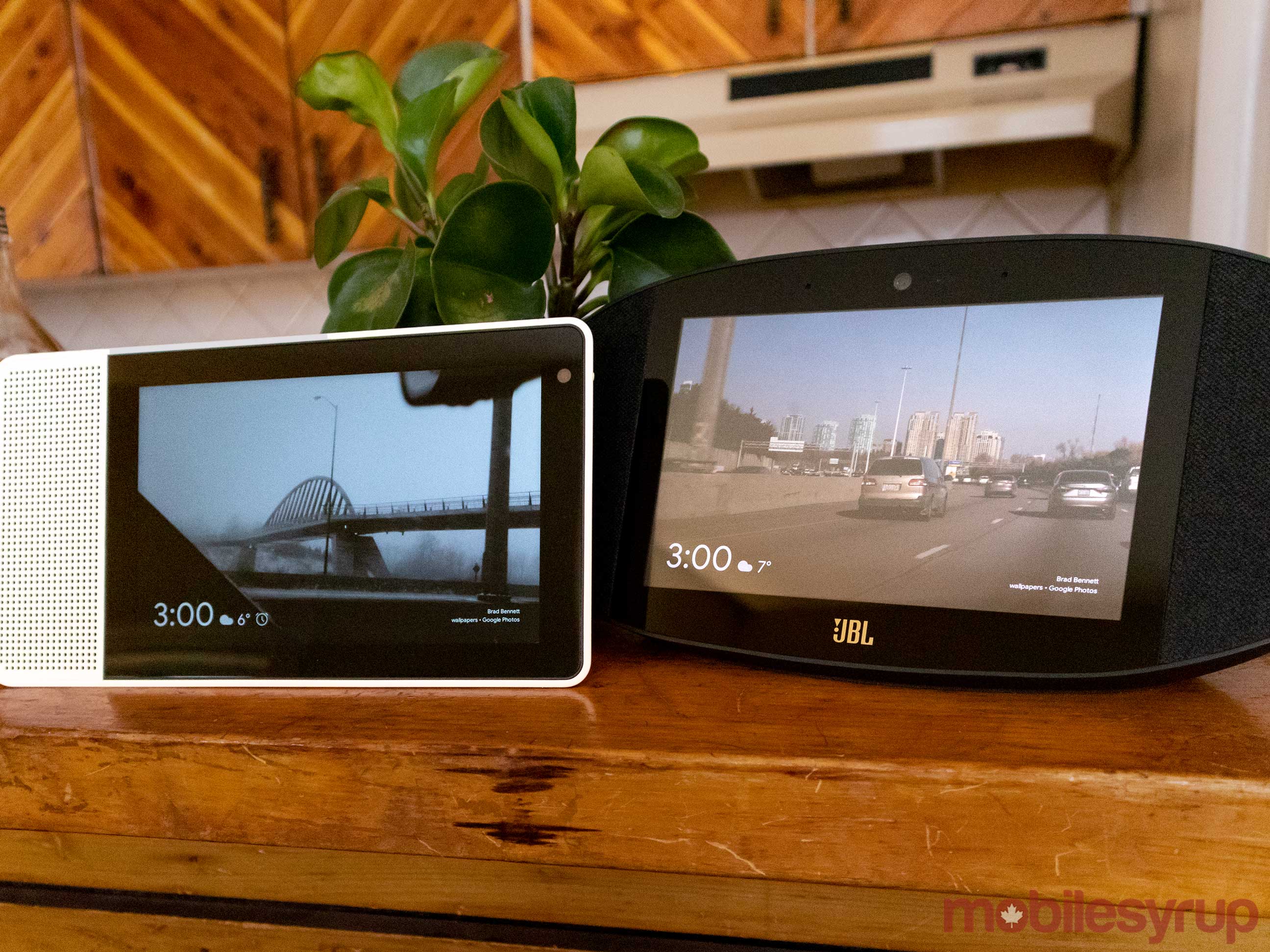 First off, if you like Google Assistant powered smart speakers, then you’ll love having a smart display. Not only can it do everything that a speaker does, but the screen shows contextual information that is both useful and intuitive.

For example, since I have my commute setup in Google Maps, every morning about an hour before I leave for work half of the display’s screen shows me the weather while the other half displays a card with a little map that informs me when the bus is coming.

Some days, if I’ve set a reminder in Google Keep, I’ll walk into my room, and the smart display has passively put the reminder on the screen for me, which is undeniably helpful.

And before I go to bed, there’s usually upcoming calendar appointments on the screen.

When the screen has nothing to show you it rotates through photos or displays a clock face. You can choose for it to display pictures from Google, like the satellite views that users may be familiar with on Chromecast.

Additionally, the smart display can go through Google Photos Albums. Users can also choose to display an auto-updating carousel of pictures of your friends and family from Google Photos. 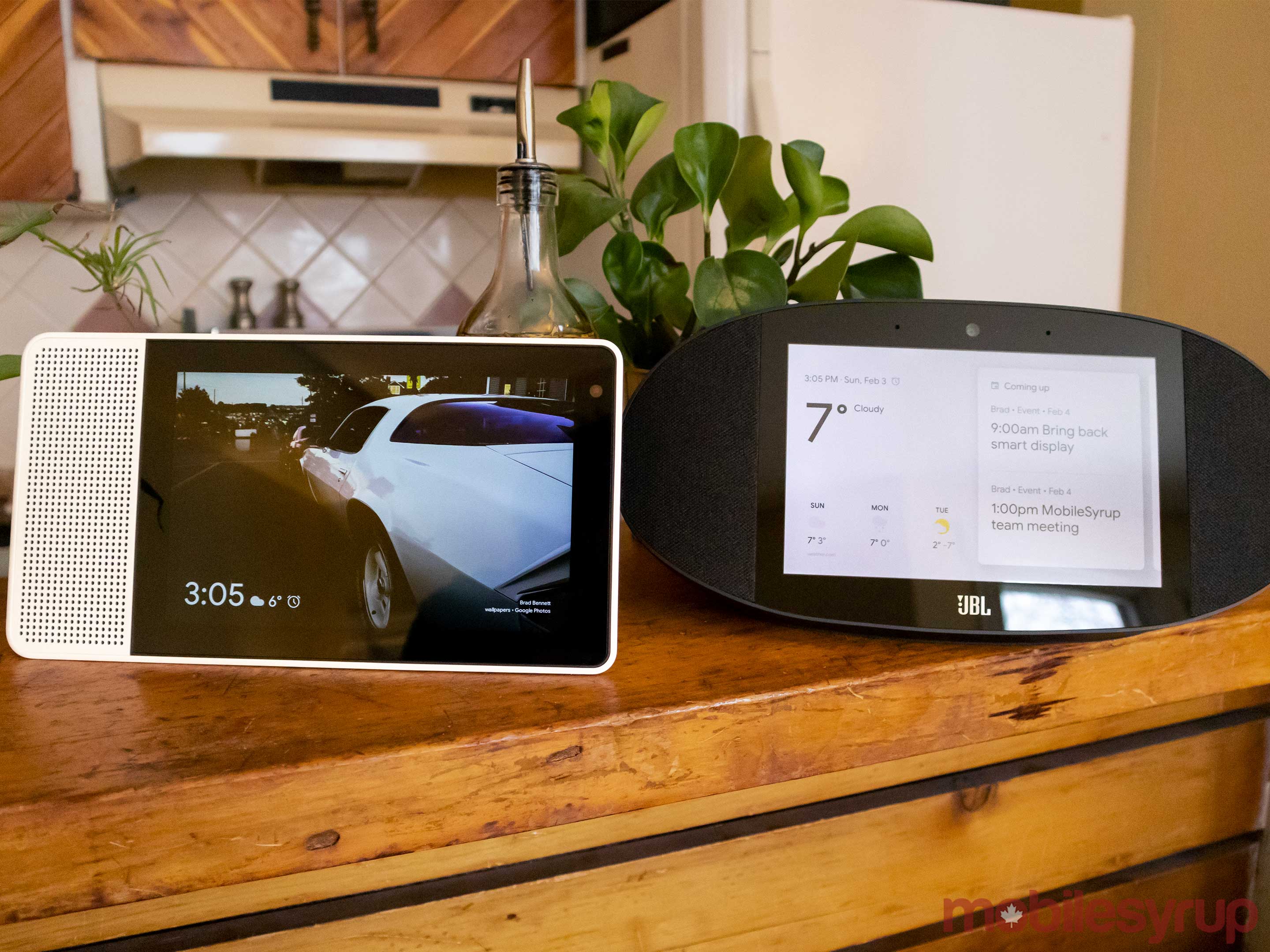 Further, the screen allows users to interact with smart home controls by touching the display instead of just talking. When a user asks one of these products to “turn on the living room lights,” for example, the screen pulls up a slider to give them more controls to adjust the brightness.

When setting an alarm or timer, there’s a small plus button on the bottom of the screen that lets users set another alarm via touch controls.

Right out of the box, the display can play YouTube videos and news briefings. Both of these devices have Chromecast built in so you can cast all kinds of content like Crave and Plex, but Netflix isn’t possible.

Embedding yourself in Google’s app ecosystem makes the process of using that display a lot easier since it can access your information and content.

Unlike the Nest Hub, both smart speakers are capable of making two-way video calls with Google Duo, and notably, you can switch the Lenovo version into portrait mode. Both devices also feature small sliders that you can push in front of the camera if you don’t feel comfortable with having one in your room.

Honestly, these devices are sexy

When it comes down to the appearance of the two displays, I don’t think either looks quite as cute as the Nest Hub, but the extra inch of screen real estate is an excellent addition to JBL and Lenovo’s models.

I like the Lenovo Smart Display’s more compact design. Its small boxy frame fits well on a table or against a wall. I also like that the speaker is on the left of the 8-inch screen. Its shape and its off-white almost matte-grey colouring seem modern, which is pleasing to look at.

The Link View, on the other hand, is black and rounded with speakers flanking both sides of the eight-inch screen. Each speaker is covered with dark grey cloth. 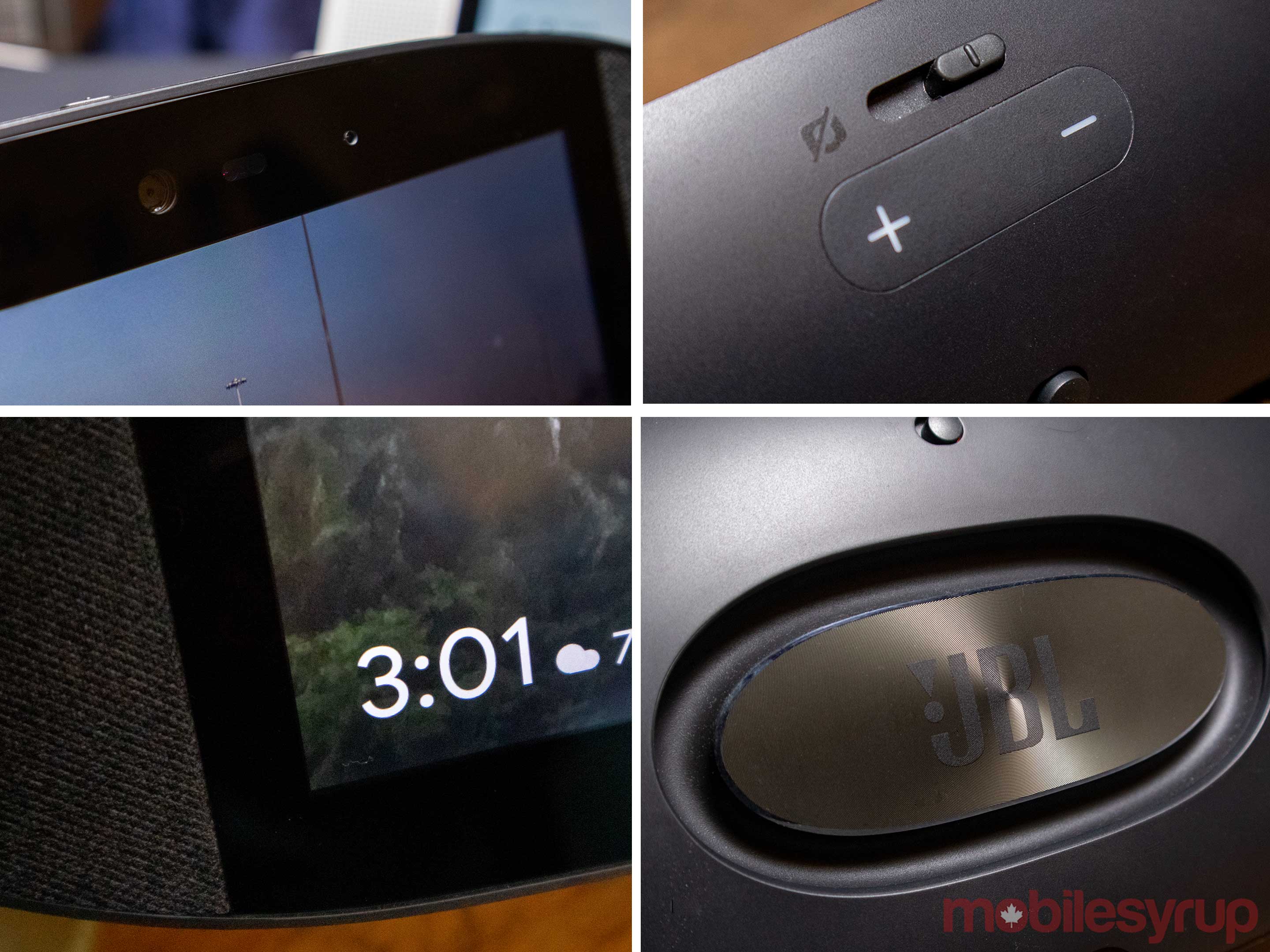 It doesn’t look bad by any means, but the design doesn’t strike me as attractive in comparison to Lenovo’s offering.

Both devices are tilted back slightly so it’s easy to see when you’re standing but not so much that you can’t use them if you’re at eye level.

Even with its egg-like design I still love the JBL Link View since its speakers are fantastic.

Are we partying or not? 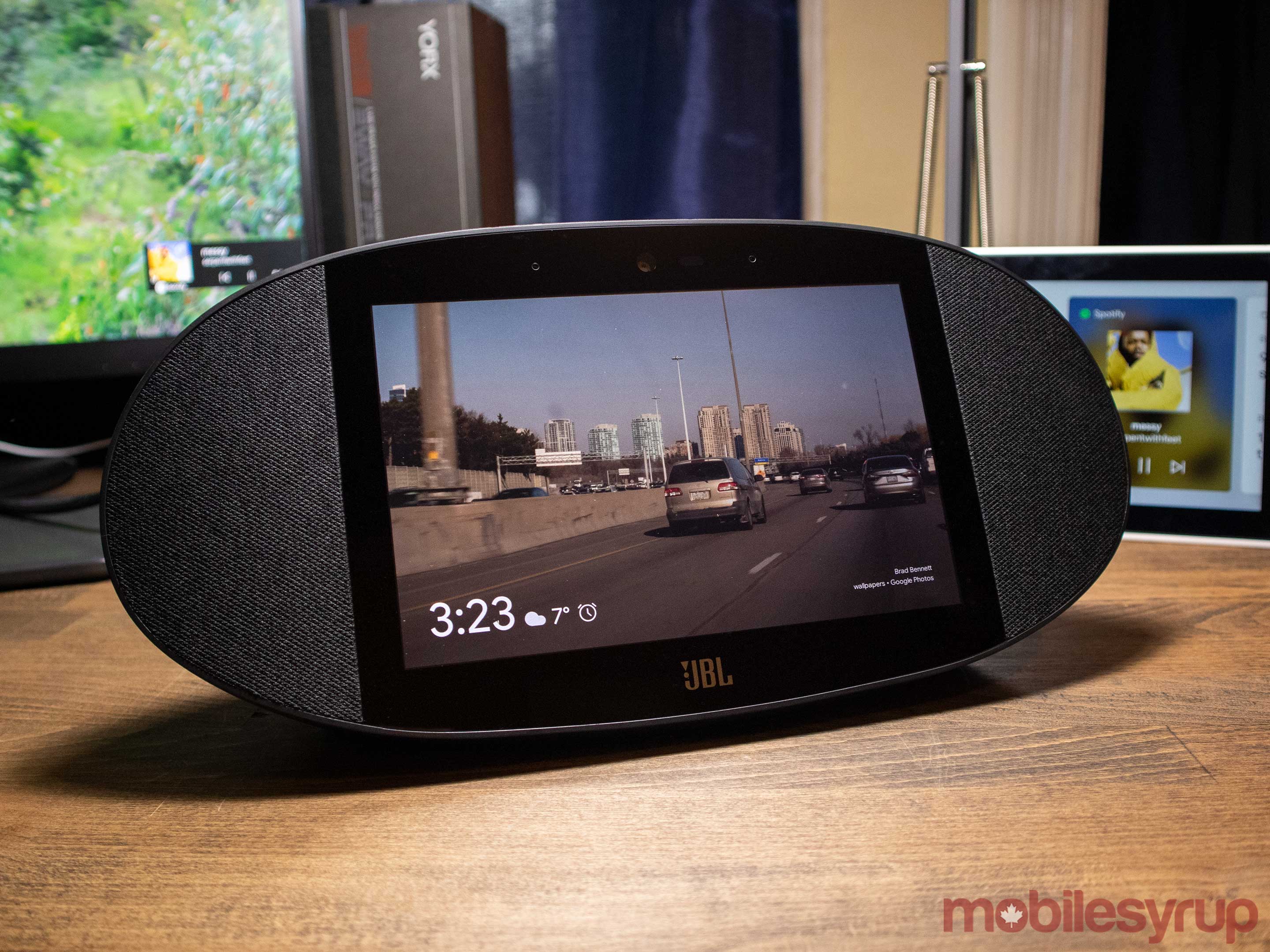 JBL packed two 51mm (2-inch) full range drivers that together output 20W of power. It also features a tiny subwoofer in the back.

Honestly, when I first played music on the JBL it threw me off since it’s a bit bass heavy, but after about an hour or so it grew on me. Now, I’m in love with its sound. I also paired it with a Google Home Mini that I’ve installed in a small speaker cabinet. The bass-lacking Mini helps even out the bass-heavy Link View in my room.

Google hasn’t added EQ controls for third-party smart displays yet, so until that happens there isn’t any other way to balance out the bass. However, when you want to party the Link View has your back.

The Lenovo’s speakers come in with one 44mm (1.75-inch) 10W full range speaker and two passive tweeters, but it can’t compare to the Link View. Specifically, once you raise the volume to its max, there’s distortion.

That said it’s still a reasonably loud speaker with the volume set to eight. The sound fills a room much better than some other Bluetooth speakers and the Google Home Mini. It’s also not outputting bass anywhere near the levels of the Link View, still, it’s clean and clear.

As long as you’re looking to use the speaker in a loud setting like a party or in a giant room, you’ll be fine.

So what display is right for you? 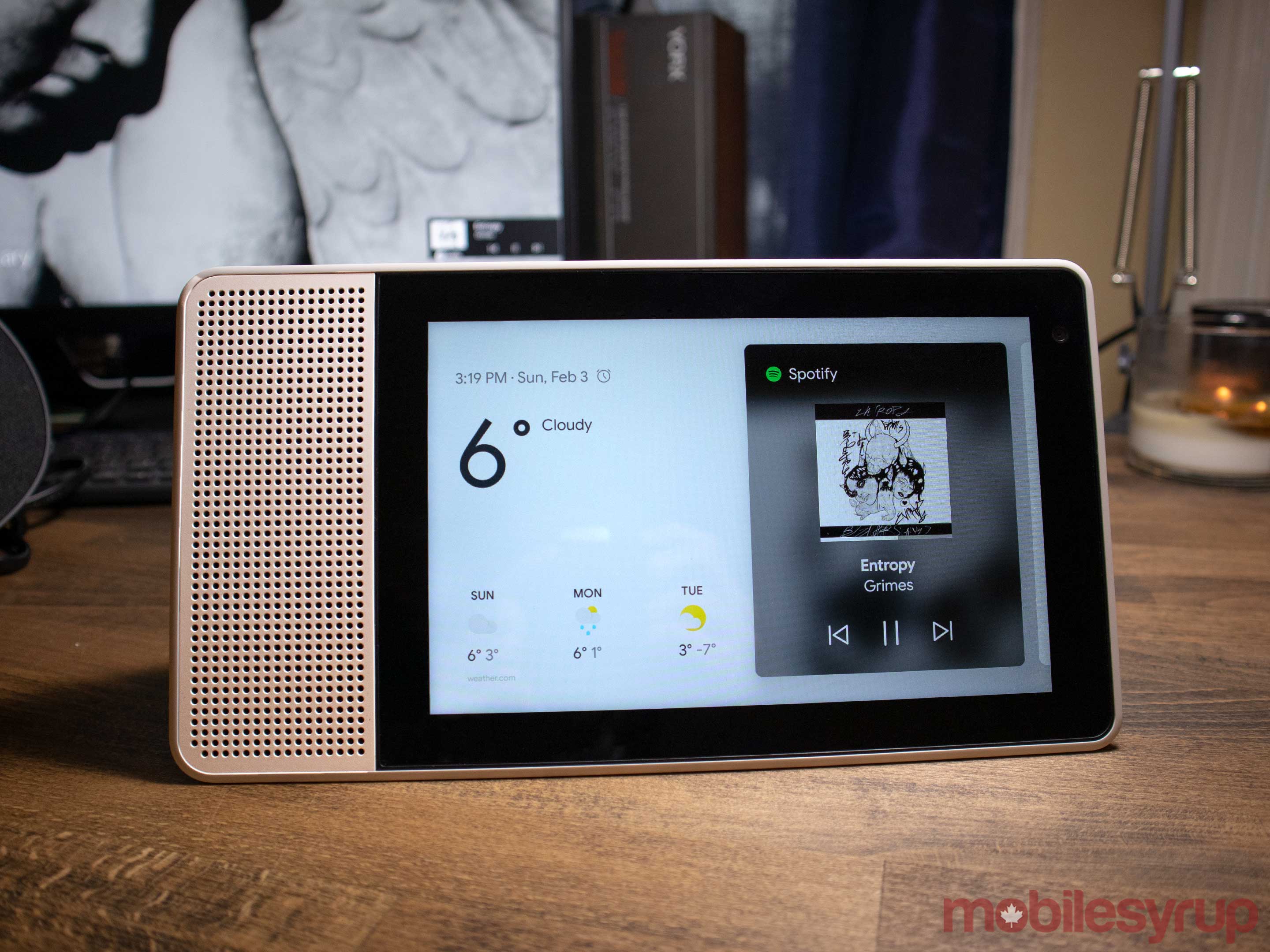 Before I pass judgement on these two products, one thing that should be pointed out is the price. The JBL Link View retails for around $350 CAD while the Lenovo starts at $260, but we’ve seen it go on sale for as low as $134 in the past.

Sure, the JBL packs a fantastic speaker but when it costs $90 more than the Lenovo it really should. And it’s honestly hard to recommend for that price even though I love this smart little boombox.

Lenovo’s speaker, on the other hand, offers decent value, especially if you’re able to pick one up for $134. Sure, it’s not going to be the life of the party, but in all honesty, I know people that use Google Home Mini speakers in their kitchen to play music, and this is a big step up from that.

Besides the speakers being passable it’s a great device. It’s even IPX4 splash proof so it could be the perfect kitchen gadget.