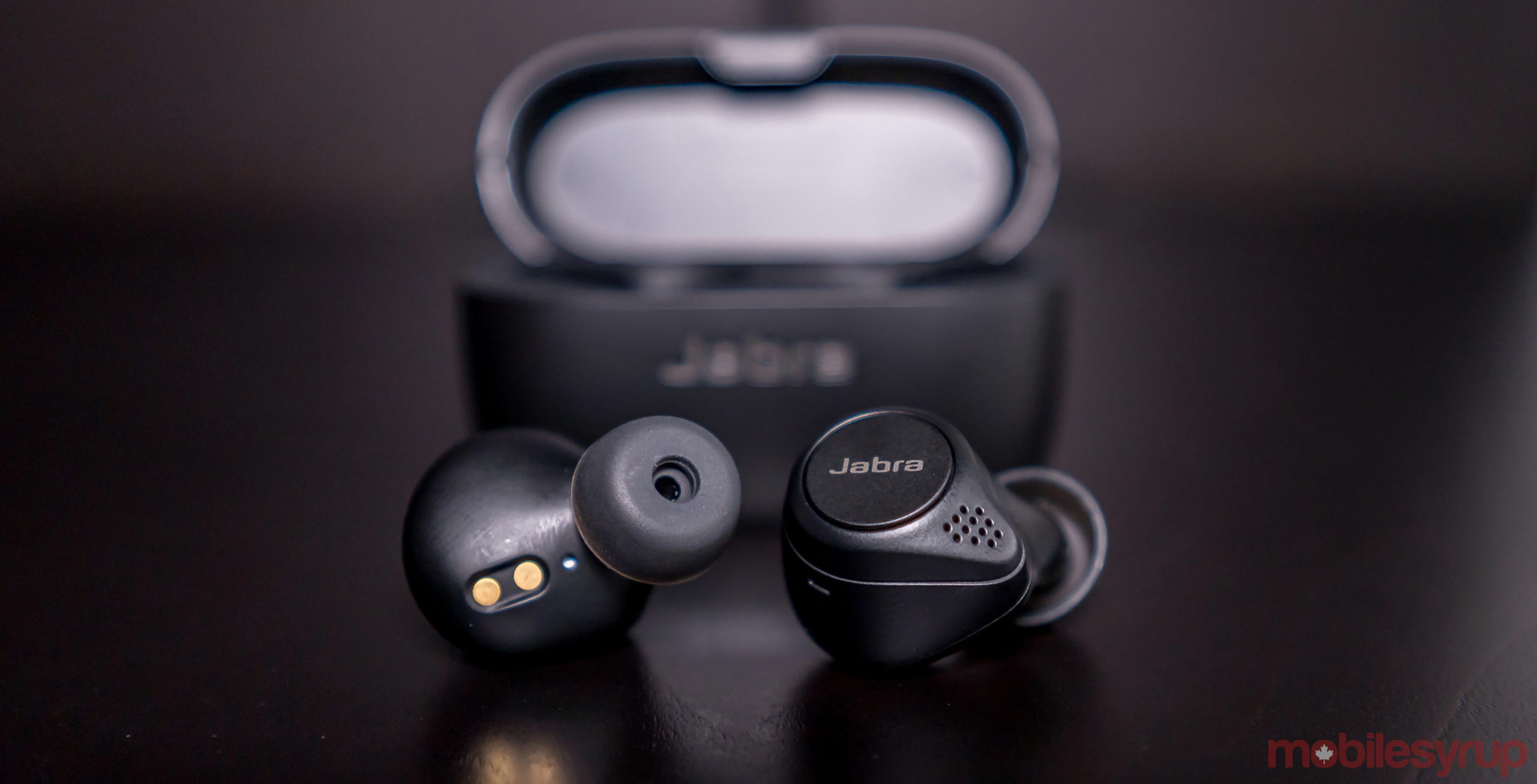 Jabra has already staked a claim to being one of the best in the business at making true wireless earbuds, and with the Elite 75t, it makes a strong case against the fiercest competitors.

Previously, Jabra benefitted from the fact it beat Apple’s AirPods in two key respects: sound quality and durability. With the AirPods Pro in the picture, the Danish brand had to address form factor and comfort to bring its pedigree full circle.

There is no doubt company engineers took the challenge seriously, as these are far and away the best Jabra has done thus far. And not just the best within Jabra’s own circle, but arguably the most complete true wireless earbuds options available. 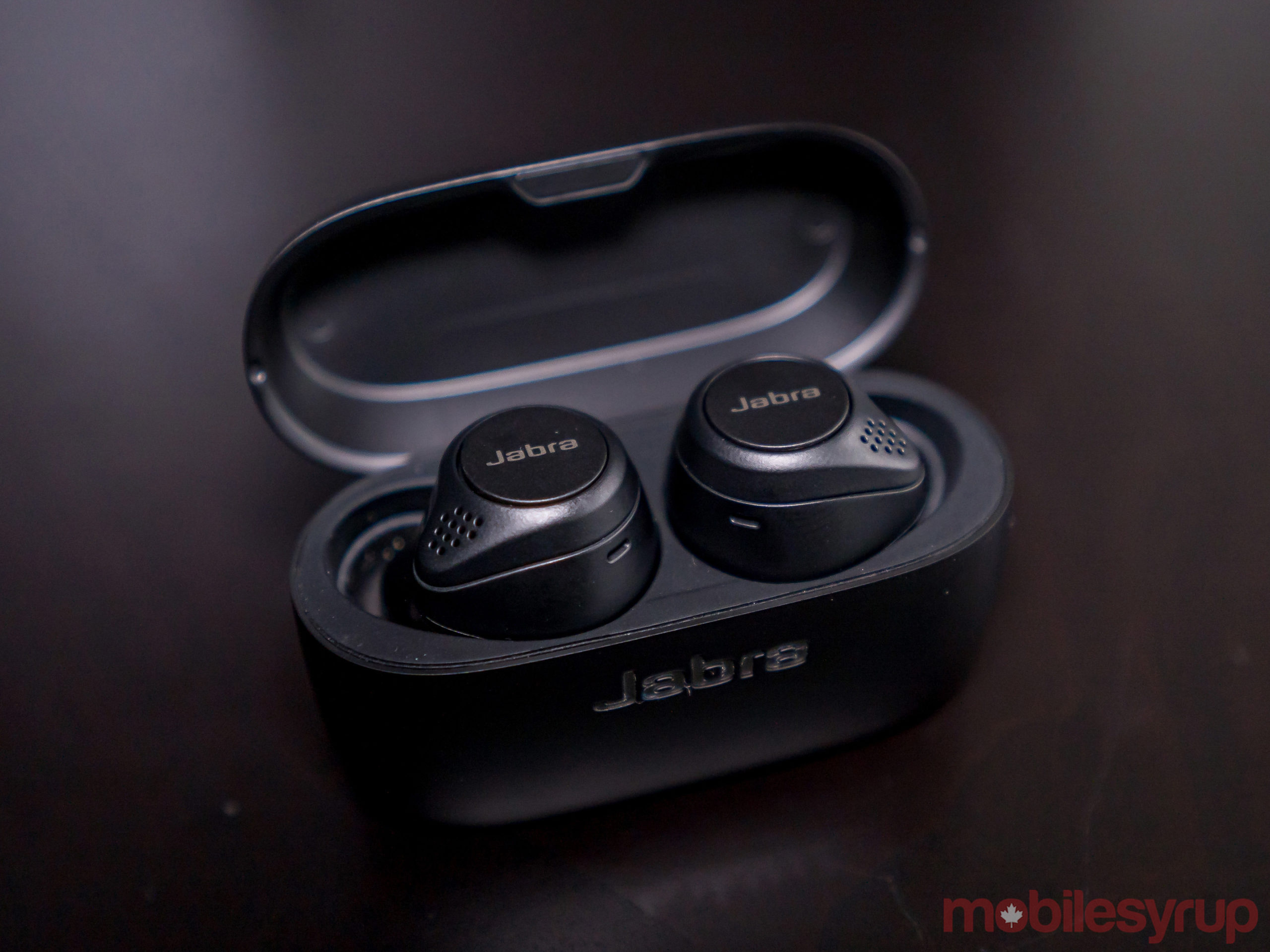 Last year, Jabra went with two Elite 65t variants — one standard, the other more rugged. The Elite 75t are standalone, and what was immediately apparent to me was the slimmer profile. Jabra says these are 20 percent smaller than the previous models, but it felt like more than that to me. Maybe it was the lighter weight or how they felt wearing them. Either way, the reduced form factor was a sign of things to come.

Jabra wisely approached previous design conundrums with proper focus. For example, the charging case now has a USB-C port, though the size and fit was a bigger deal to me. One issue with prior models was that the earbuds never quite fit snugly when using the largest-sized ear tips. It often required putting a little squeeze to the case’s top to close it up.

Not so this time. The earbuds fit perfectly, no matter the tips, and with magnets inside to lure them in, it’s easily the most elegant setup Jabra has managed to date. The case itself is also noticeably smaller than before, making it more pocket-friendly.

The earbuds themselves are equipped with many of the same specs as before. The drivers are the same, so audio output isn’t any more or less powerful here. The dual microphone array is also set up to work on each earbud in the same fashion, except for one key design decision. Jabra removed the microphone “arm” that stuck out in prior models, going for a more streamlined look that helps make these ones so much slimmer.

Eartips come in large, medium and small. No matter which size is best for you, the trimmer frame on each earbud means the Elite 75t should fit more ears comfortably than their predecessors did.

Jabra’s Sport+ app supports the Elite 75t in various ways. Firmware updates, an equalizer (EQ) and other controls are available. Find My Jabra is a decent tracking feature that pins the last known location where the earbuds disconnected from your phone. 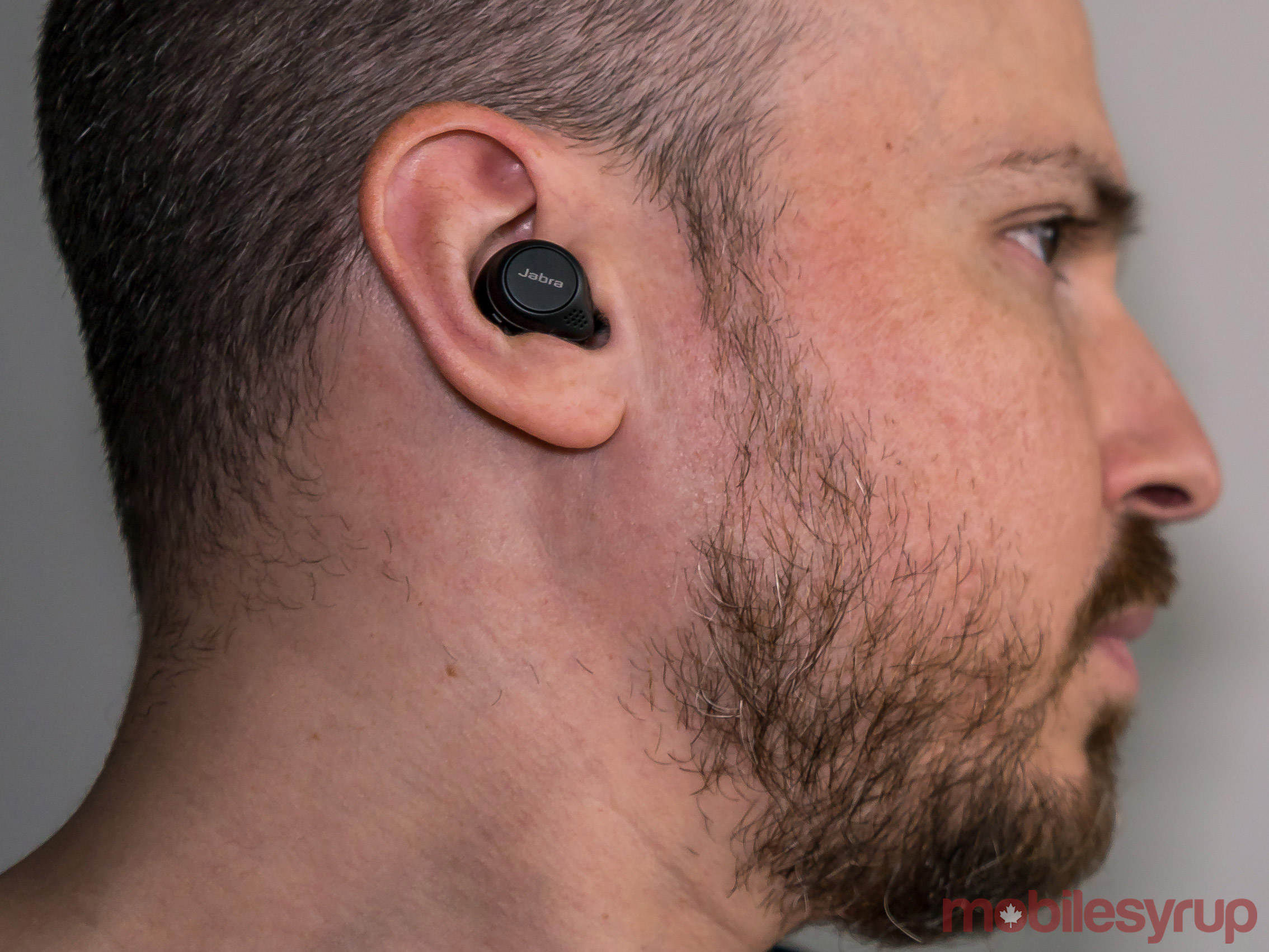 Unlike Apple and Sony, who each offer active noise-cancellation on their flagship models, Jabra doesn’t have that here. It’s an omission somewhat offset by the snugger fit delivering excellent passive noise isolation. When I wore these on the subway or walking down a busy street, they did a great job keeping outside noise to a minimum, though I did have to raise the volume to help.

The IP55 rating makes the Elite 75t water and dust-resistant — more so than the AirPods Pro and their IPX4 rating. If I were to go on a sweaty workout or get caught in the rain, I’d go with the Elite 75t any day.

That matters in another way because, as Apple essentially suggests its earbuds will die after two years, Jabra offers a two-year warranty for its model.

Also unlike Apple’s earbuds, Jabra has onboard buttons for control. Press the right earbud’s button to play/pause/accept call. Press the left earbud and you activate HearThrough, the transparency mode that uses the onboard mics to let in ambient sound. There’s a neat feature in the Sound+ app’s settings where it gives you a choice of continuing music playback or pausing it each time you turn on the mode. It works wonderfully in the latter case, making it easy to talk without removing the earbuds quickly.

Holding the button on the right raises volume, while doing it on the left lowers it. Double-clicking the right button awakens Siri or Google Assistant. There is the option to use Alexa instead, which is a carryover from the previous model. It’s better this time around, though still missing the Spotify control I personally want in such a setup. As is, it’s still limited to Amazon Music. 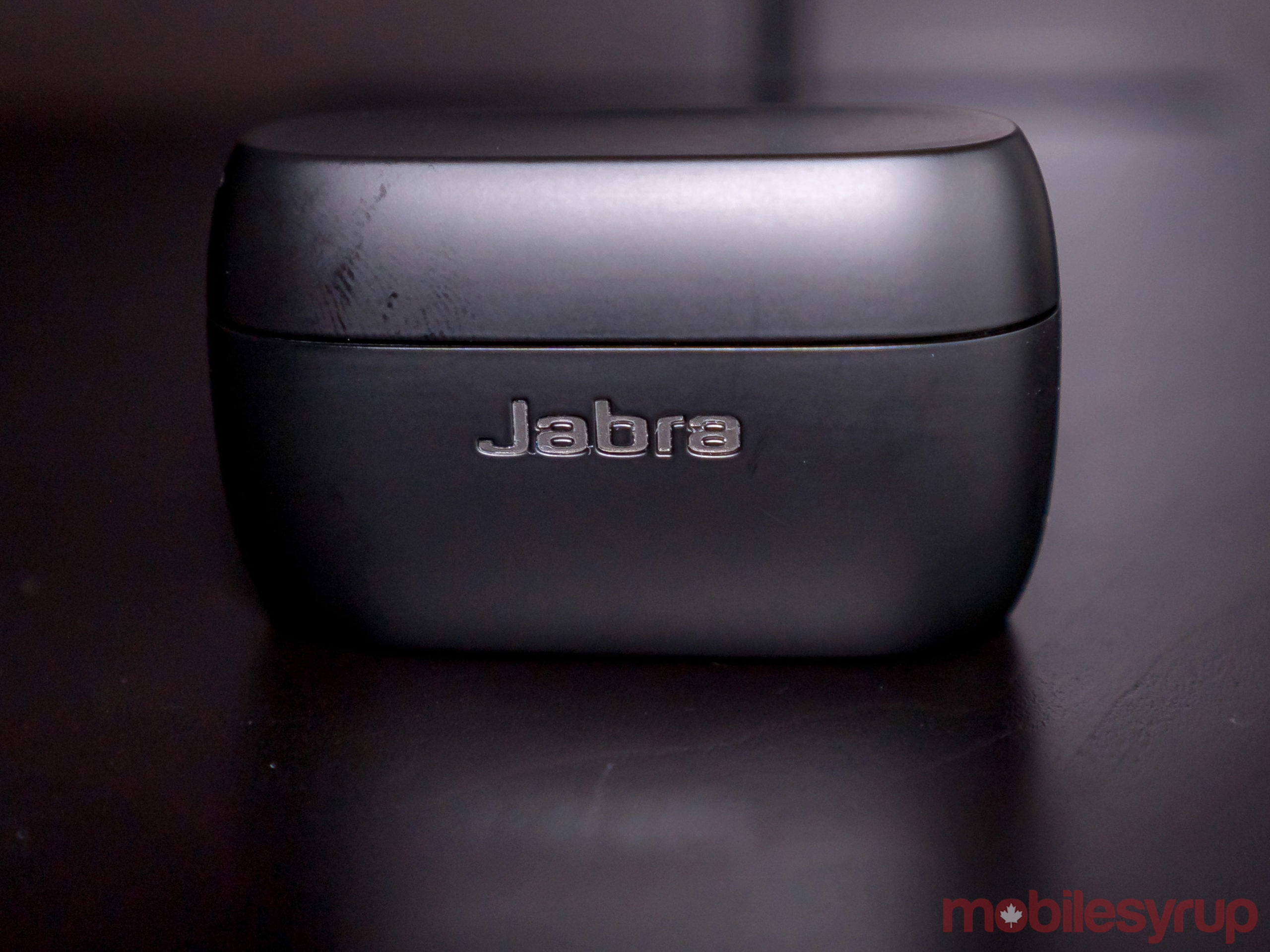 Using Bluetooth 5.0 is a boost for the Elite 75t for the simple fact they almost never lose a connection. This was, by far, the sturdiest connection Jabra has accomplished, and while it wasn’t really a major issue before, it’s always noticeable when instances are reduced to near-zero.

The EQ is helpful in customizing how you want to listen to music or spoken word content. There are six presets to start with, plus the option to create your own. While it’s nowhere near the level of customization of the Jaybird Vista, which has an entire user community making EQ presets, this is still better than anything Apple offers.

By default, the Elite 75t are already excellent. Jabra has been among the most consistent in audio quality for its true wireless earbuds, only now the improved fit amplifies that further. It also means they are less likely to wiggle or fall out from sweat during a workout.

Bass always benefits most with a tighter seal, and that’s no exception here. There is a Bass Boost EQ preset if you want to go deeper, or you could create your own. The mids and highs nicely complement each other, putting together a solid audio experience right out of the box.

I never found myself complaining about how anything sounded, regardless of what the content was. Nor did I notice any sync issues when watching video on a phone or tablet. They were also comfortable over long stretches, rarely ever causing any pinching or aches in my ears. 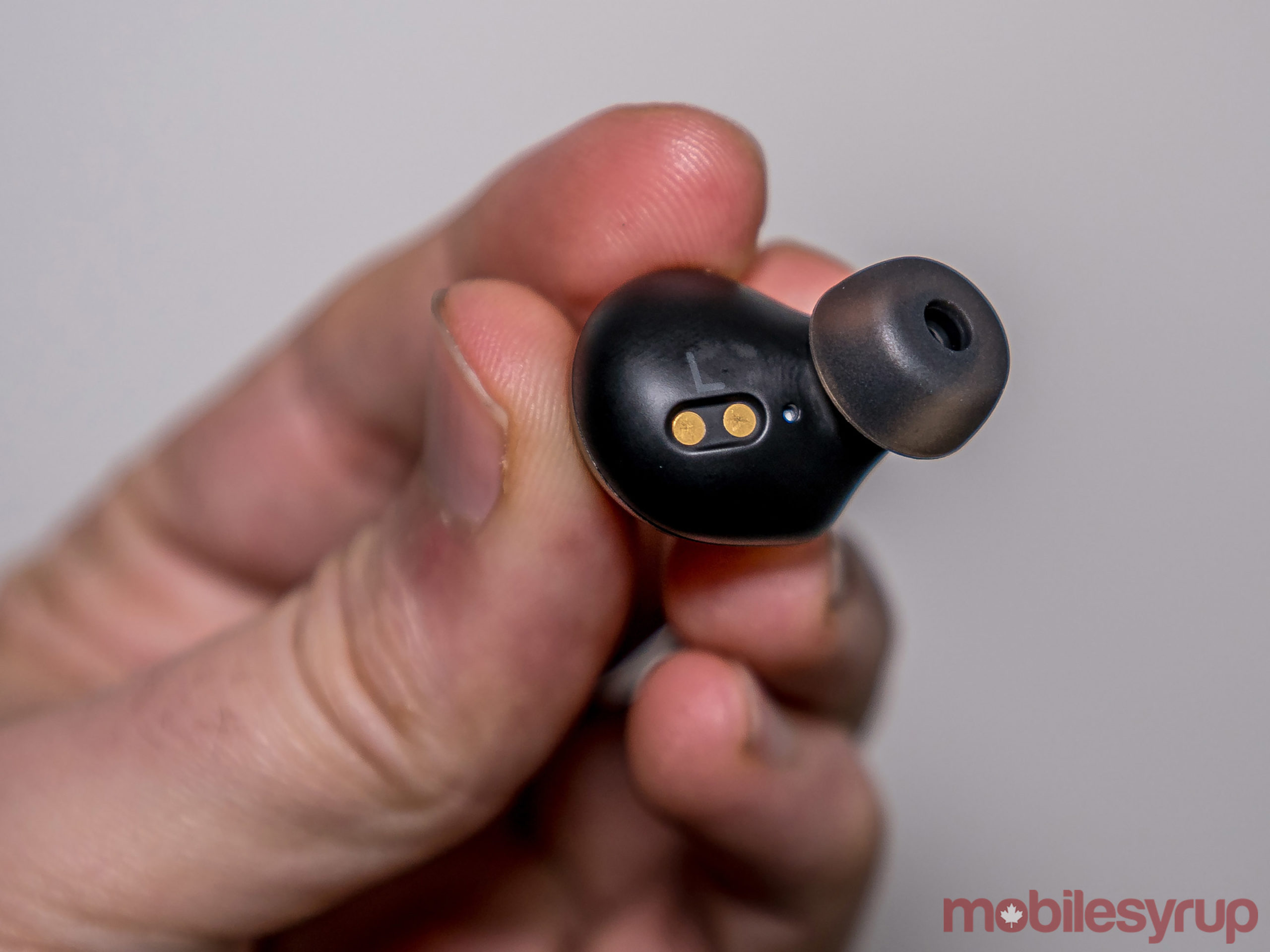 Call quality was solid with the previous Elite 65t, though there was room for improvement. The Elite 75t are excellent, though I would still give the edge to the AirPods Pro in that regard.

Jabra offers some options to adjust the experience in the app settings, like a Sidetone slider to adjust how loud your own voice will sound to you on a call. A call EQ has a choice of boosting bass or treble. You can also toggle on a Bluetooth priority mode that cuts off all other connected devices during an active call to boost the signal. When the call ends, the devices reconnect.

All of that is neat, but I would argue the biggest difference is the tighter fit. I found it much easier to listen to callers, and the passive noise isolation did an excellent job holding off ambient noise. If it was an exceptionally noisy environment, though, the lack of active noise cancellation became clearer.

The onboard mics did an excellent job catching my voice on calls. When friends didn’t realize that I was talking to them on something that wasn’t my phone, I knew there was something different. 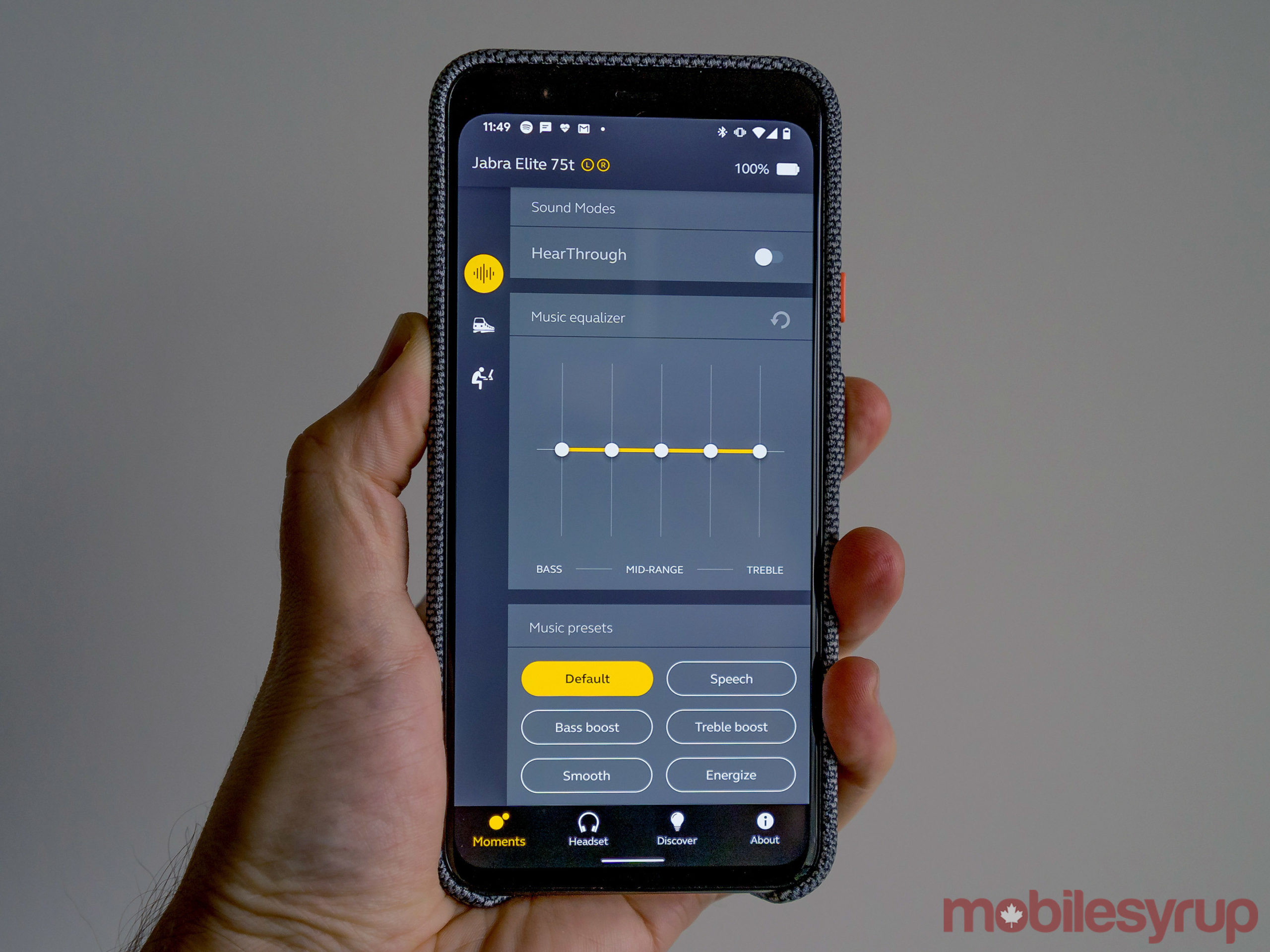 Jabra boosted battery life by 50 percent, going from five hours in the previous models, to 7.5 hours with the Elite 75t. As always with any pair of wireless headphones, volume level determines how far the battery goes. The good news is that I routinely hit north of six hours with a slightly louder volume. At about 60 percent volume, I got seven hours.

Not only is that miles ahead of the AirPods Pro, which are rated at 4.5 hours, it also surpasses the Elite 65t. I rarely hit four hours with those, so this was a real step in the right direction.

However, Apple has an edge in two respects: the case has up to six extra charges in it, and you can charge it wirelessly. Jabra manages just shy of an additional three full charges for the Elite 75t case, and didn’t include wireless charging, though it has intimated that a ‘Pro’ version may come soon with that feature.

Charging the Elite 75t for 15 minutes can squeeze out an hour of playback, which is useful in a pinch before heading out for a commute or to the gym.

The Elite 75t cost $239.99. Expensive, sure, but a bargain compared to the AirPods Pro and their hefty $329.99 price tag. That’s a $90 difference before taxes, and the question you have to ask yourself is whether the features Apple included in them are worth the extra money.

For Android users, it’s a no-brainer to me. Buy these, not the AirPods Pro. The Sony WX-1000MX3 are certainly another option if you want active noise cancellation. The rugged Jaybird Vista are the same price as the Elite 75t and offer more on the audio quality side.

For iOS users, it may be a tougher choice, but these are worth strong consideration for what they bring to your ears.

"For Android users, it’s a no-brainer to me. Buy these, not the AirPods Pro."