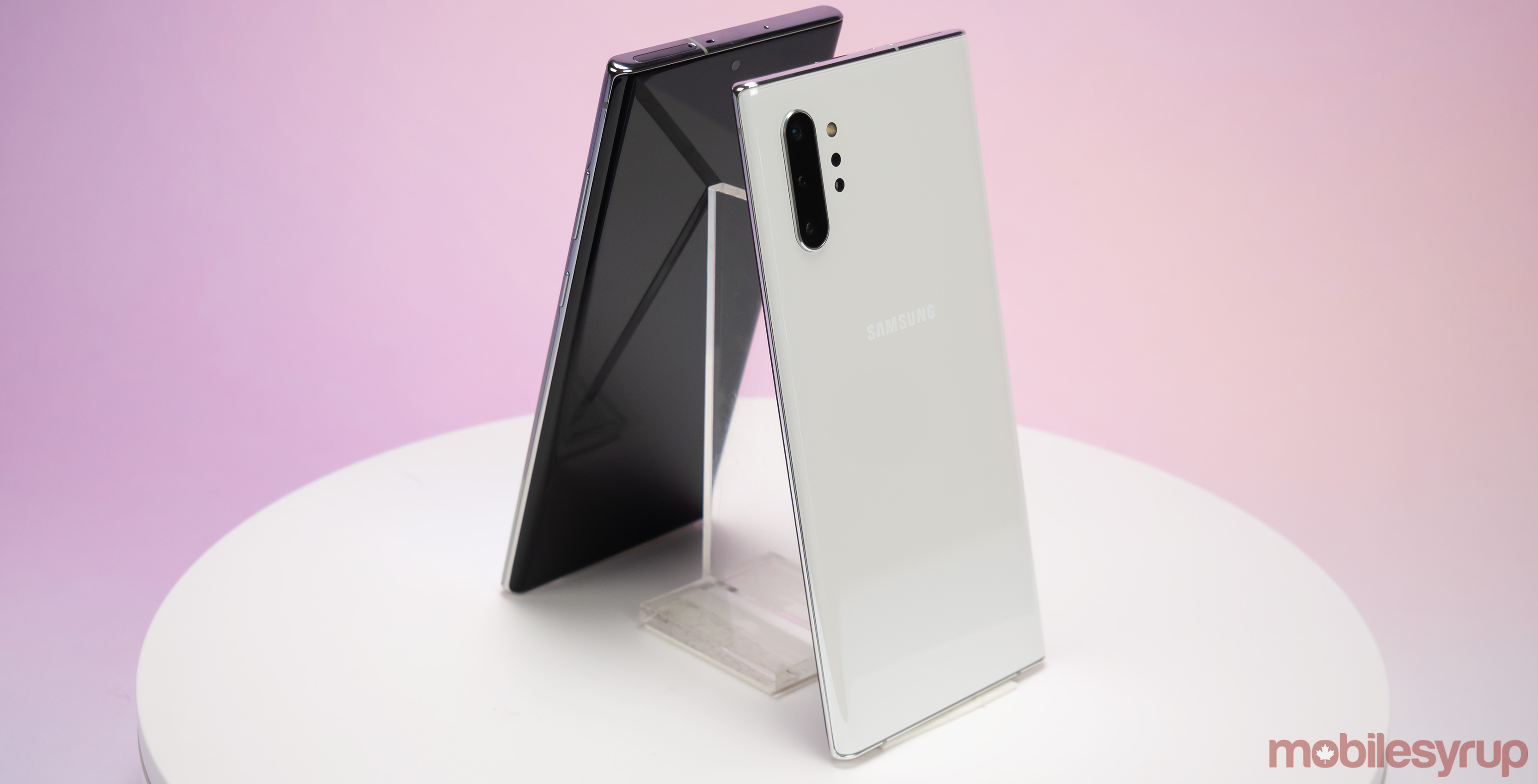 Since its launch in 2011, Samsung’s Note line has always embodied the epitome of what the South Korean manufacturer has to offer in the smartphone space.

Unsurprisingly, that hasn’t changed with the Galaxy Note 10 and Note 10+, the latest entries in the long-running series of smartphones.

Samsung’s expected iterative cadence of yearly updates is in full force with the Note 10 and the new, larger Note 10+. 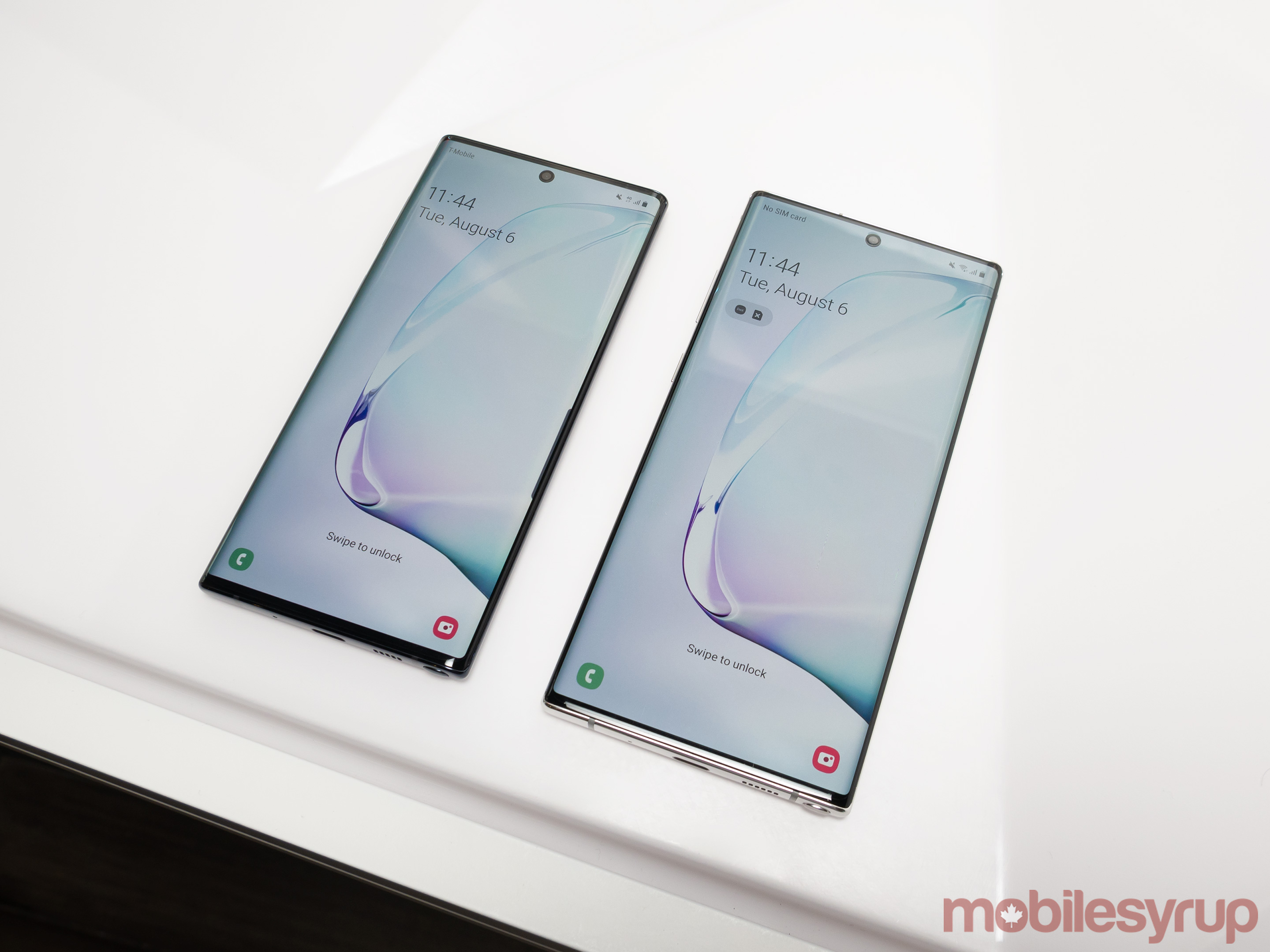 That said, the new additions to the smartphone could be worthwhile depending on what you’re looking for from a device, as well as what handset you’re currently using. 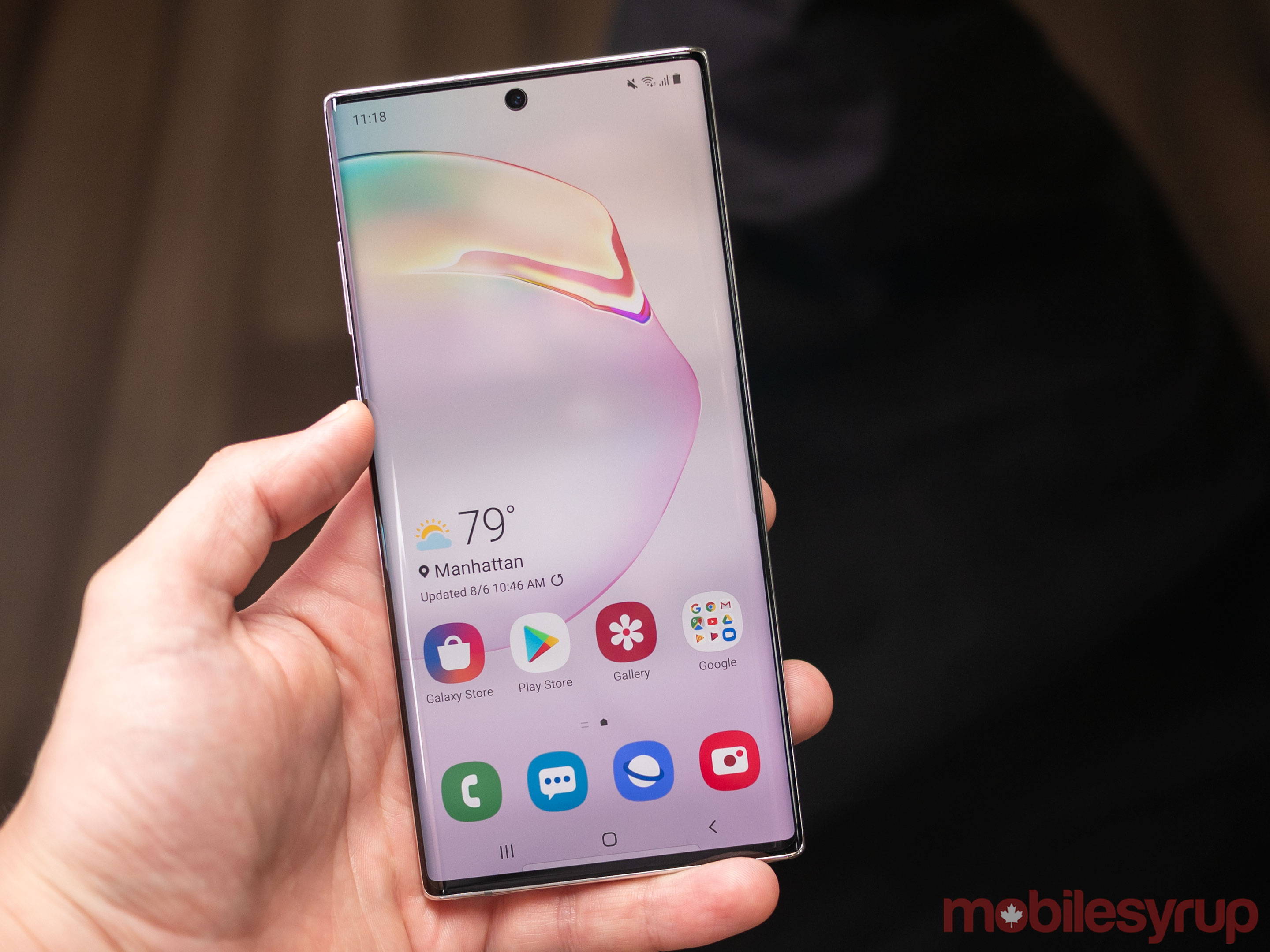 First and foremost, it’s important to mention there are two Note 10 devices this time around: the 6.8-inch Note 10+, which measures in at just slightly larger than the Note 9 but with a bigger screen, and the smaller 6.3-inch Note 10. Apart from size, there are other differences between the two handsets as well.

For example, the Note 10’s battery comes in at 3,500mAh, while the Note 10+ features a 4,300mAh power source. A 25w ‘Super Fast Charger’ is included in the box with both phones, but only the Note 10+ supports 45w charging through a high-capacity charger Samsung plans to sell separately. 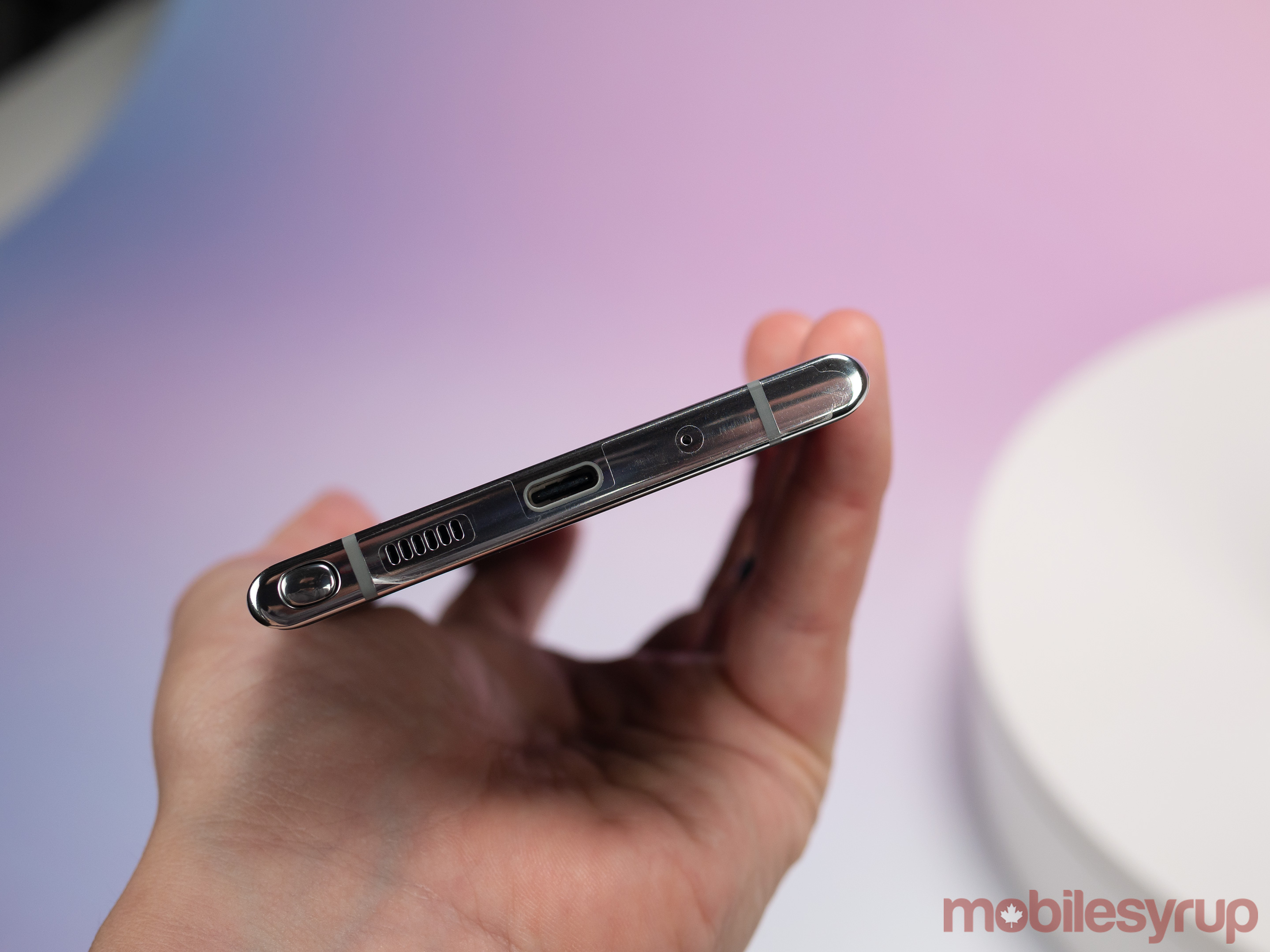 When connected to a 45w charger, Samsung says the Note 10+’s battery is capable of charging from zero to 70 percent battery in approximately 30 minutes.

Moreover, the Note 10+ includes 12GB of RAM while the Note 10 comes equipped with 8GB of RAM. The phone also features the same in-display ultrasonic fingerprint scanner as the Galaxy S10 instead of a physical one below the rear camera like with the Note 9. 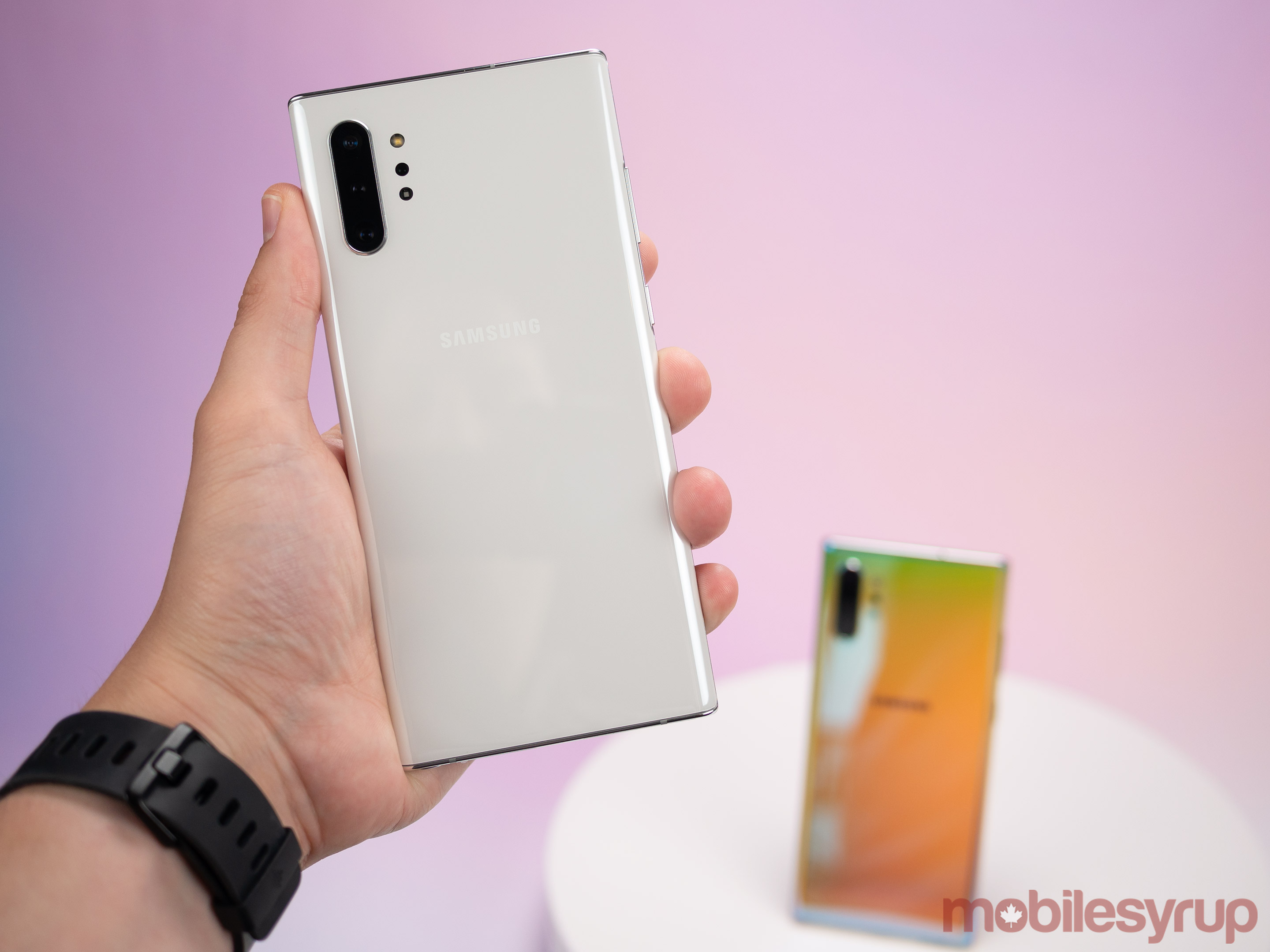 The screen resolution is also worse this time around with the Note 10’s display featuring a Full HD+ resolution of 2280 x 1080-pixels. On the other hand, the Note 10+ features a display panel with a QHD 2560 x 1440 pixel resolution.

While a minor shift, particularly considering the fact past Samsung flagships, even those which were capable of outputting at higher resolutions, came set to Full HD out of the box, it’s still disappointing the company downgraded the standard Note 10’s screen resolution.

It’s in the software 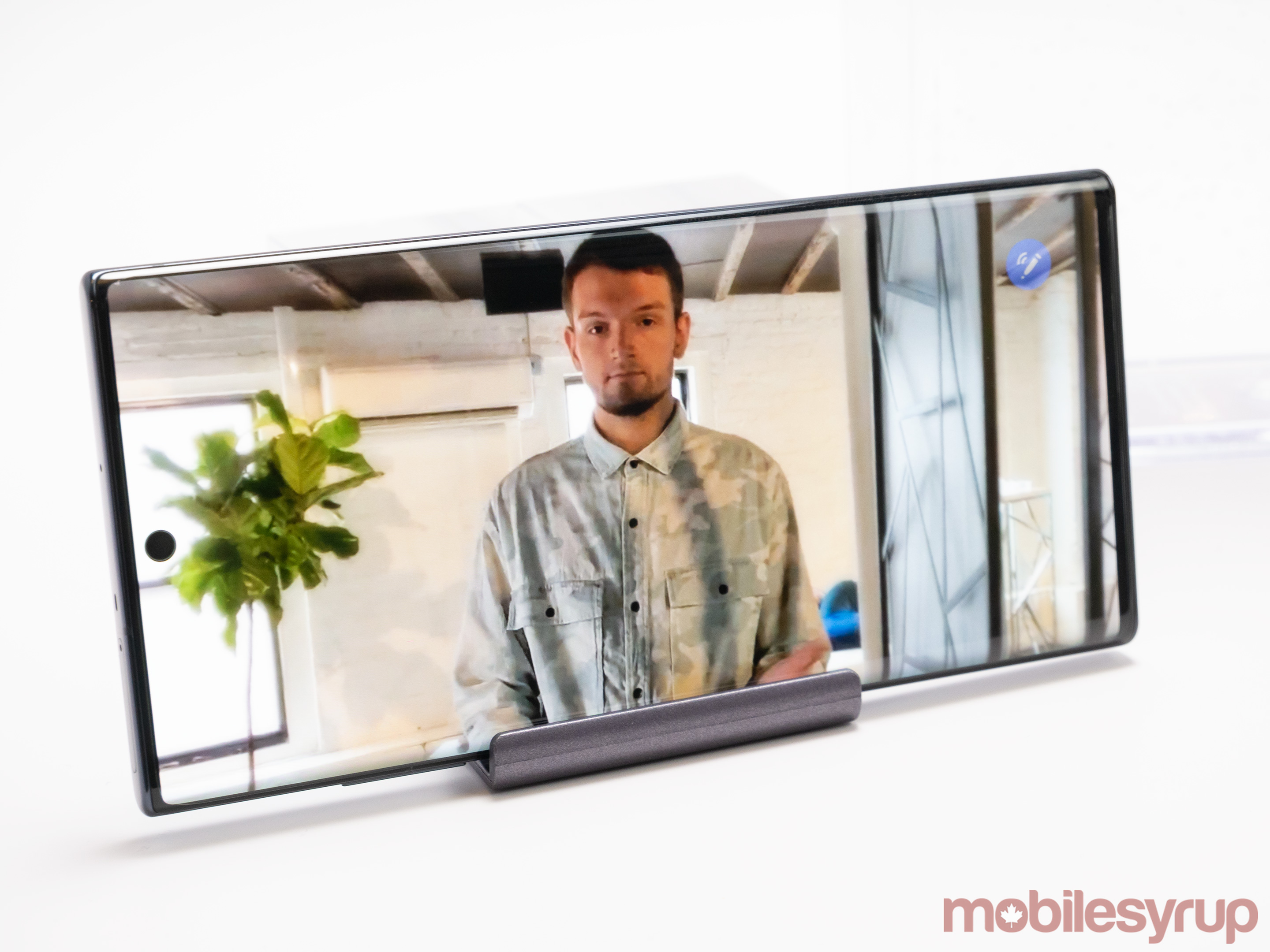 The other major difference between the two smartphones is the Note 10+’s rear-facing time-of-flight sensor. The inclusion of this sensor powers Samsung’s new ‘Live Focus’ video recording depth-of-field control, allowing users to adjust background bokeh on the fly while shooting video.

I briefly saw ‘Live Focus’ in action at Samsung’s preview event, and while the resulting video clip is described best as looking extremely processed, it was still unlike anything I’ve ever seen from a mobile device. 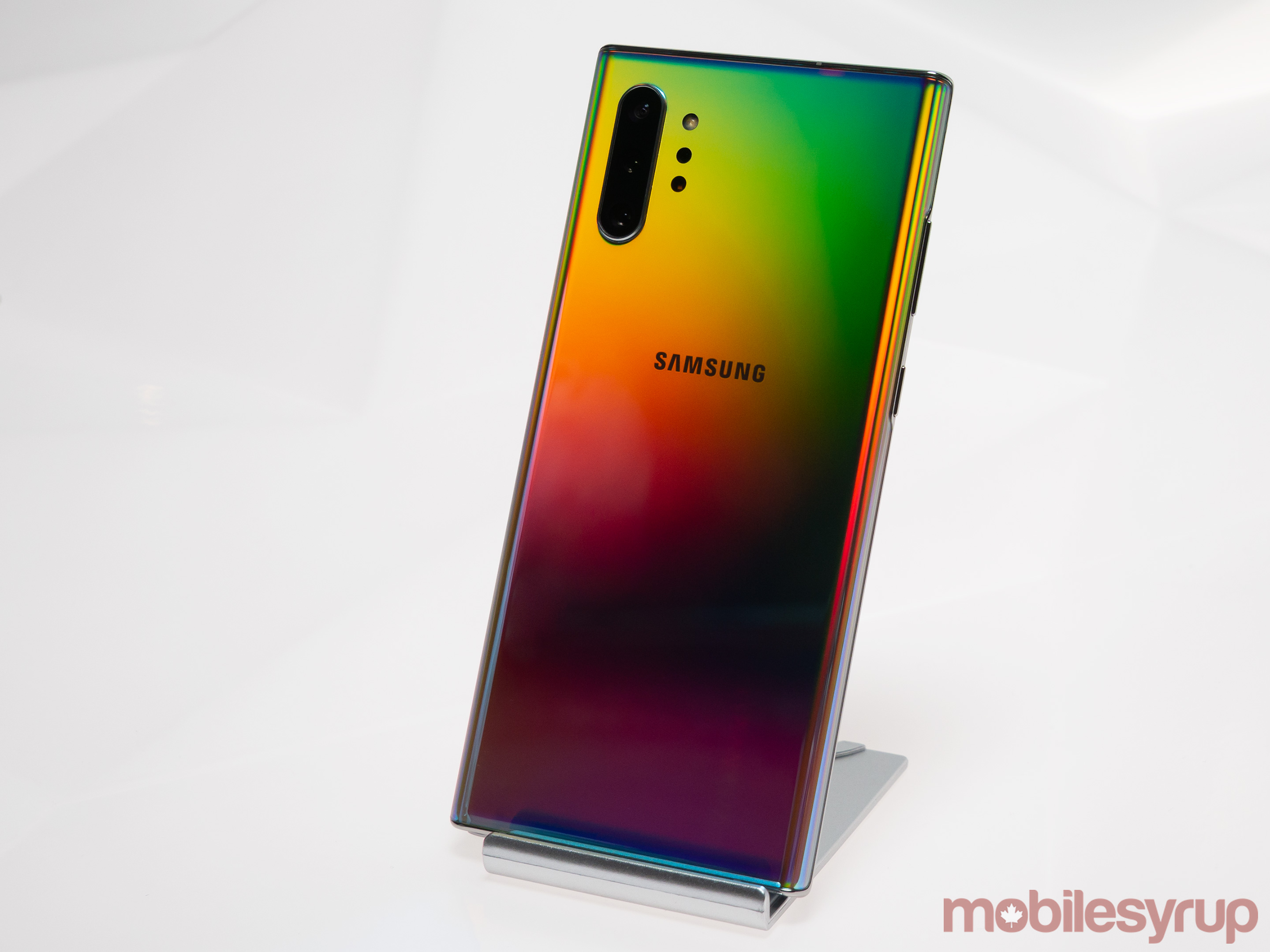 Samsung has also brought the S10’s excellent Super Steady camera mode to the Note 10 while increasing the sampling rate at which the feature captures video. The company has added a native video editor, as well, along with optimization for Adobe Rush.

Continuing with camera specs, the photography experience the Note 10 and Note 10+ offer seems identical to what the Note 9 featured, at least at the outset, including a 12-megapixel wide, 12-megapixel telephoto and 16-megapixel ultrawide rear-facing lens. The location of the three-camera array has shifted from the centre of the phone to the left side though. 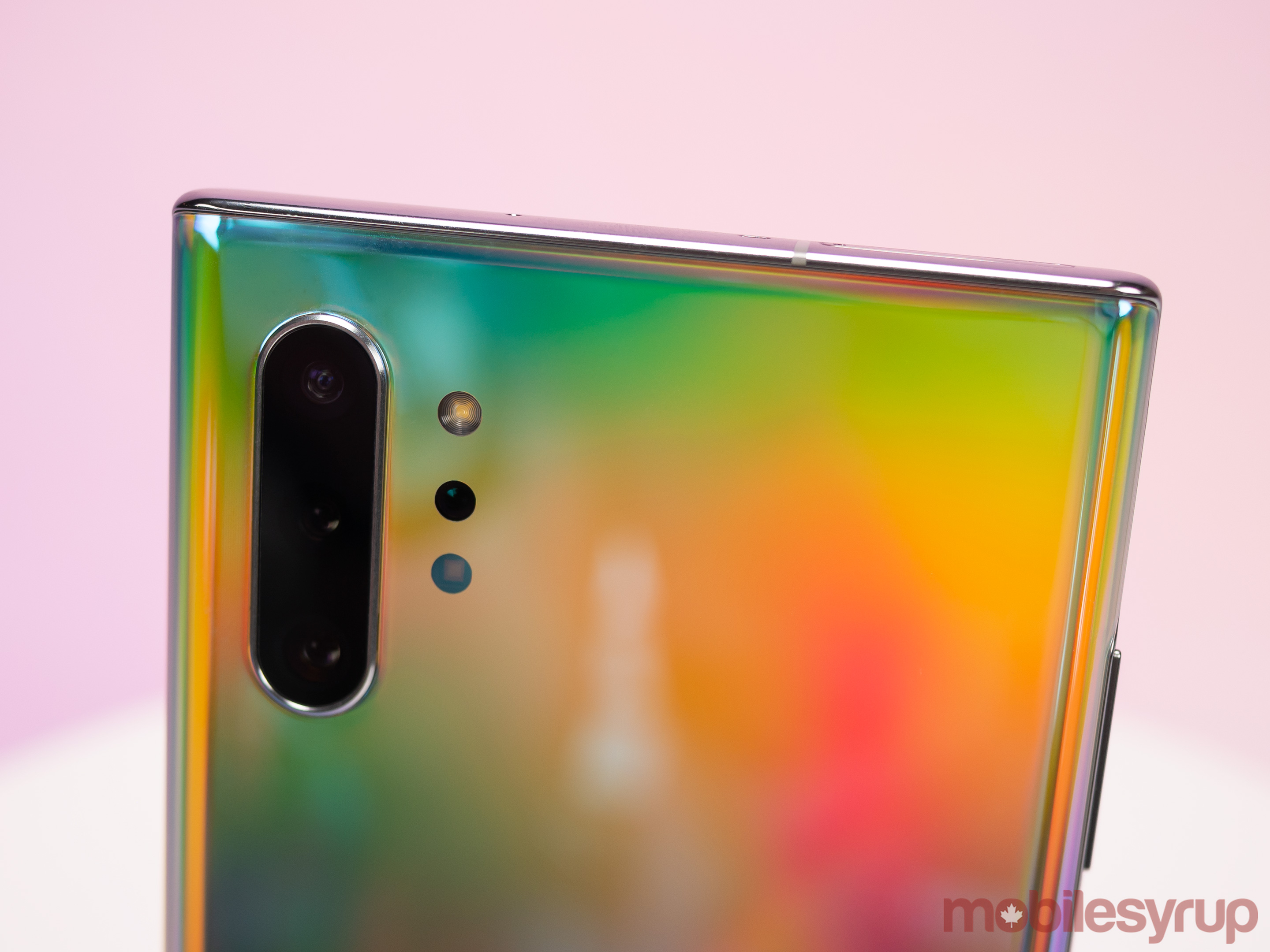 The first thing most people will probably notice about the Note 10 is the phone’s in-display front-facing camera, a feature borrowed from Samsung’s S10 and S10+. However, unlike its S Series counterparts, the Note 10’s 10-megapixel front-facing camera is located at the top centre of the smartphone’s display.

As a result of the hole-punch, ‘Infinity-O’ screen, the Note 10 and Note 10+ feature slightly reduced top and bottom bezels, making the front of the two phones nearly all-display. The Note 10’s HDR10 certified screen is one of the best I’ve encountered in the smartphone industry, surpassing even Apple with regard to colour vibrancy and overall fidelity. Further, the minimized bezels make the screen that much more immersive given the Note 10+’s 6.8-inch display fits in a body only slightly larger than the Note 9’s.

A fundamental shift in design philosophy 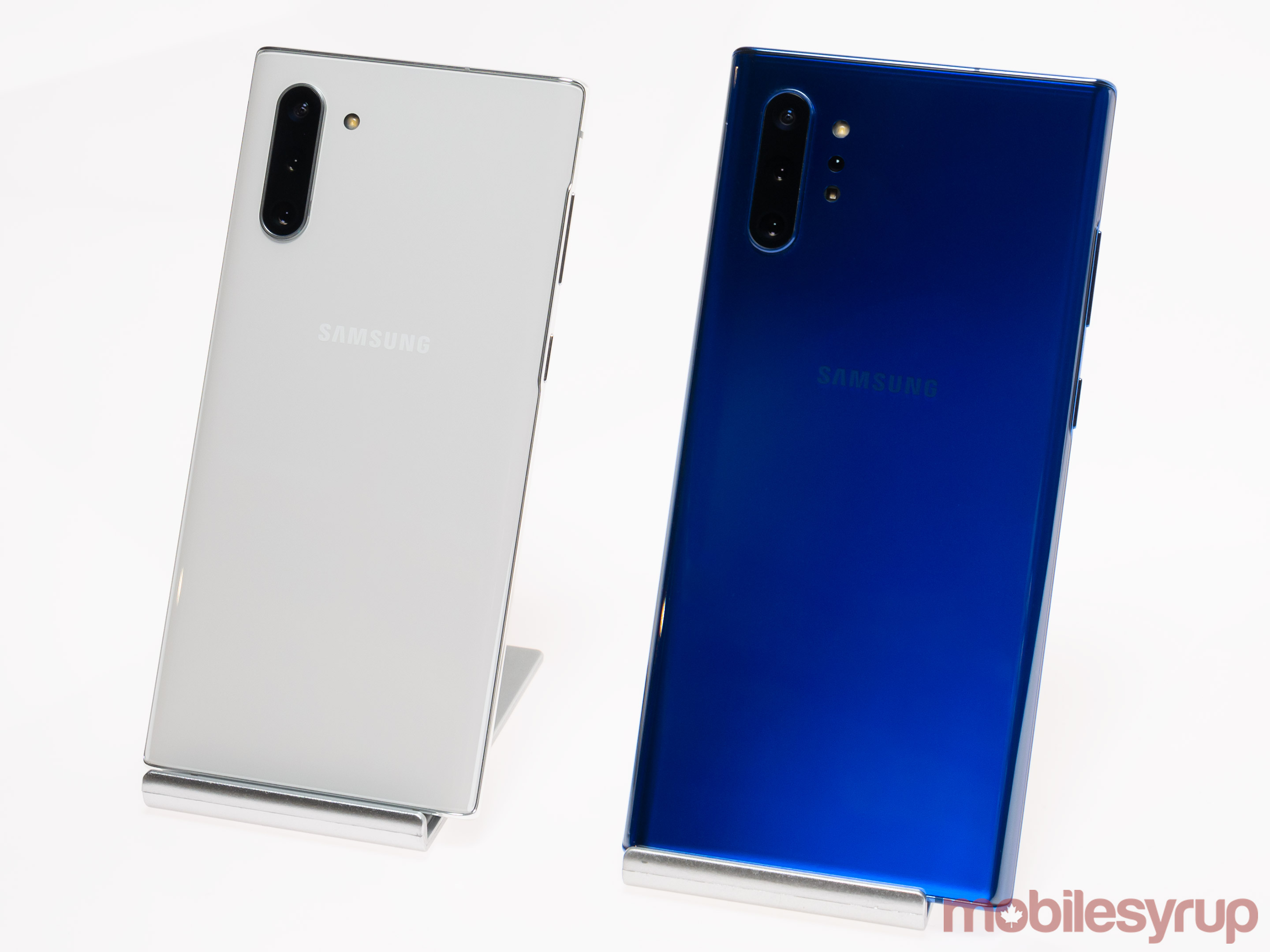 Other changes to the Note line are a little more controversial, including the removal of the standard 3.5mm headphone jack in favour of a single USB-C port. Given how often Samsung poked fun at Google and Apple for ditching the headphone jack at its past Unpacked events, it will be interesting to see how the company positions this fundamental shift in design philosophy.

Making matters worse, the smartphone also doesn’t feature a USB-C-to-3.5mm dongle in the box. It’s worth mentioning that in Canada Samsung is offering a free pair of Galaxy Buds with the pre-order of either the Note 10 or Note 10+. 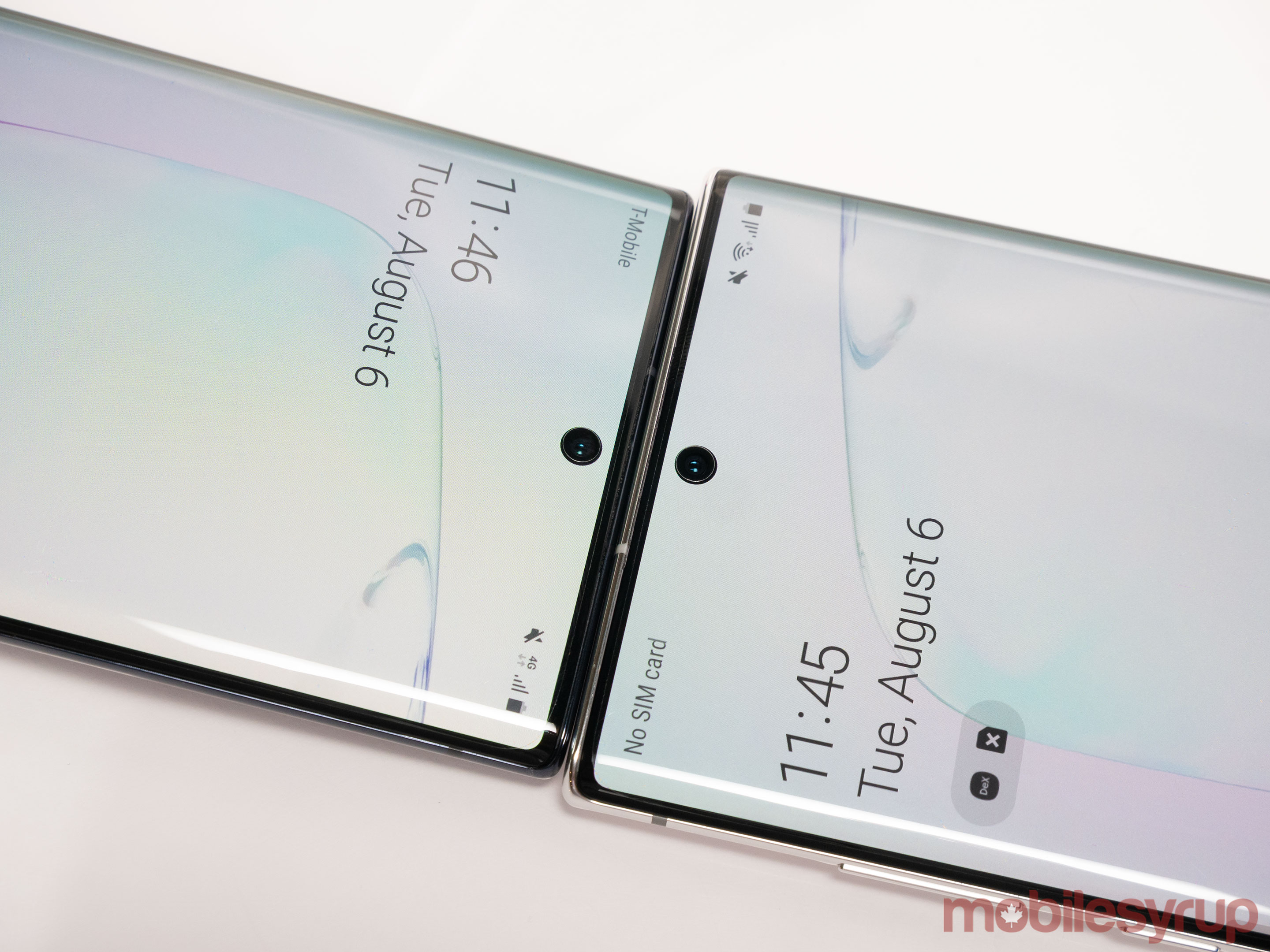 Just like the last few iterations of the smartphone, many of the Note 10’s new features come courtesy of new software. For example, the new uni-body S Pen with a six-axis motion sensor now supports Nintendo Wii-like gestures called ‘Air Actions.’ These gestures allow users to navigate select Samsung apps by flicking their wrist and making other motions. 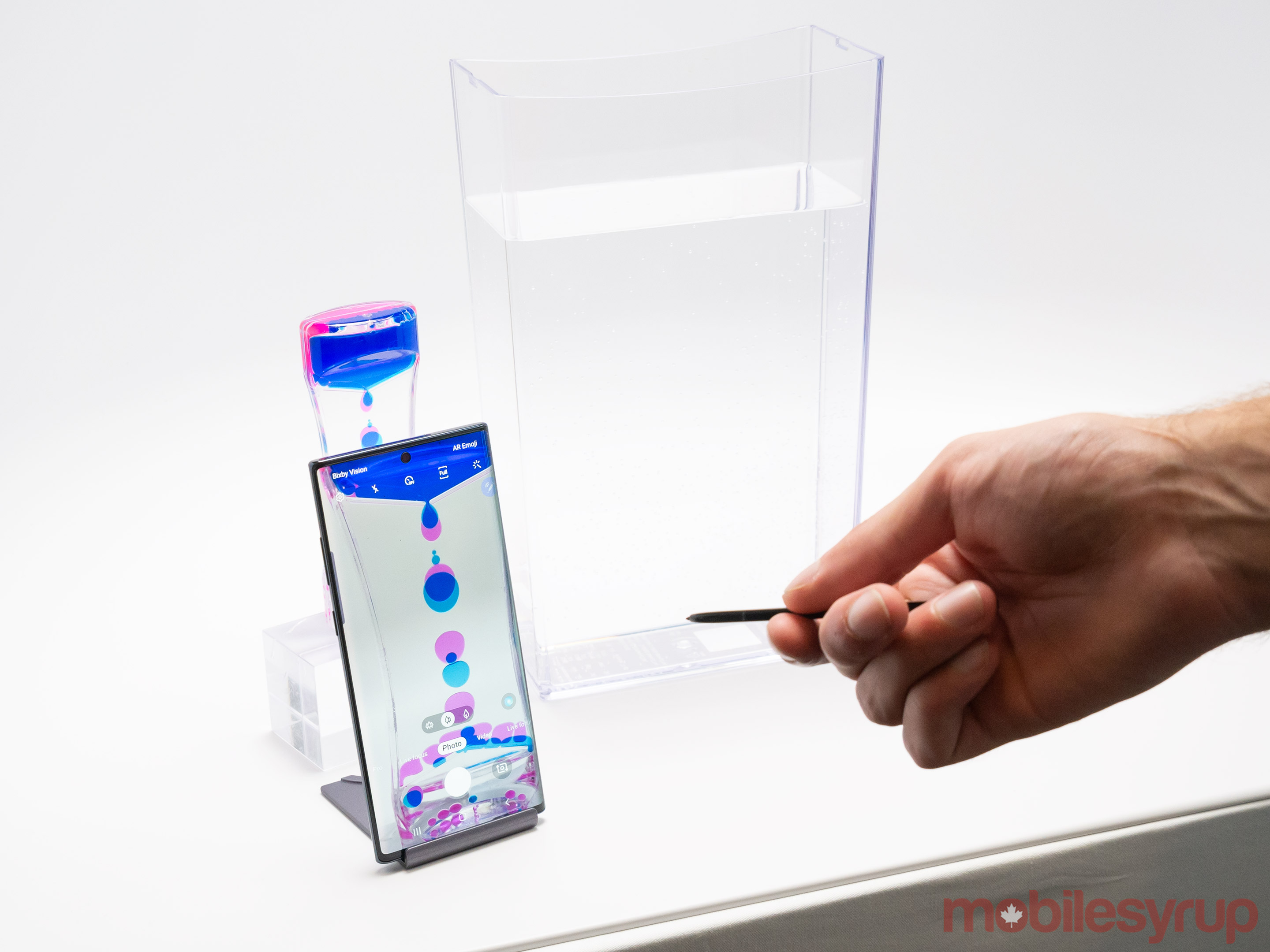 Similar to last year’s remote camera shutter, Air Actions are a welcome addition to the Note line that seem to work quite well, though I do question how useful they are. It’s also worth noting that the feature is only compatible with specific Samsung apps like the camera and media apps, as well as YouTube. Samsung says it plans to open up its S Pen gesture API to third-party developers, but it remains unclear if developers will add the functionality to their apps.

There are additional new S Pen features as well, including better battery life and improved handwriting recognition. Samsung says that it utilized hundreds of thousands of handwriting models to improve the phone’s writing-to-text functionality. While I didn’t test the feature out myself, it certainly seemed impressive and precise during a short demo I watched. 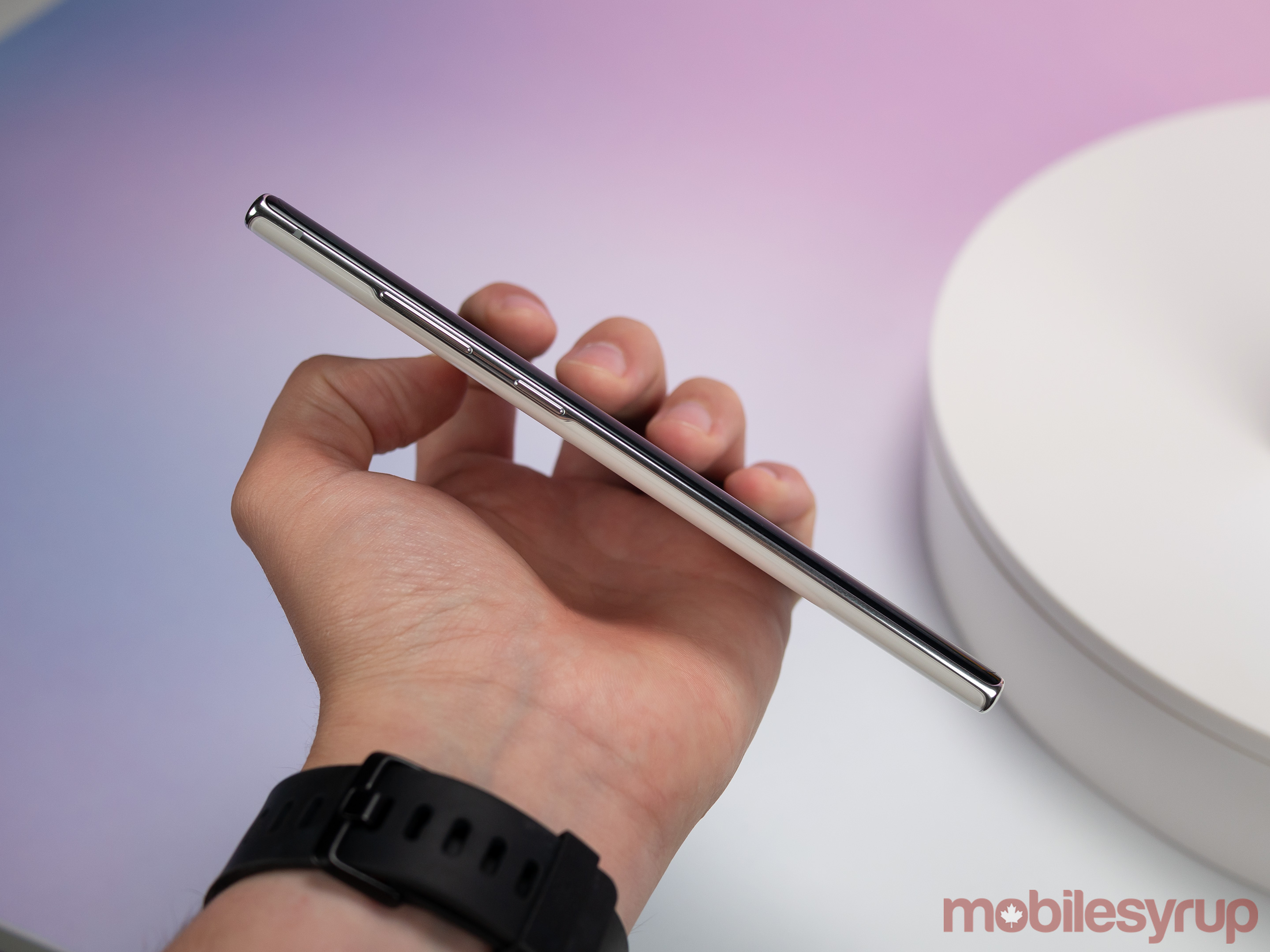 Samsung has also added new functionality to the Note 10 called ‘Zoom-in Mic.’ This feature utilizes the Note 10’s multiple microphones to target specific sounds in a video you’re shooting with the handset.

Again, while I didn’t test the Zoom-in Mic out myself, it seems to work moderately well. The main question surrounding the feature is how much of a difference it really makes regarding the noise the smartphone picks up. 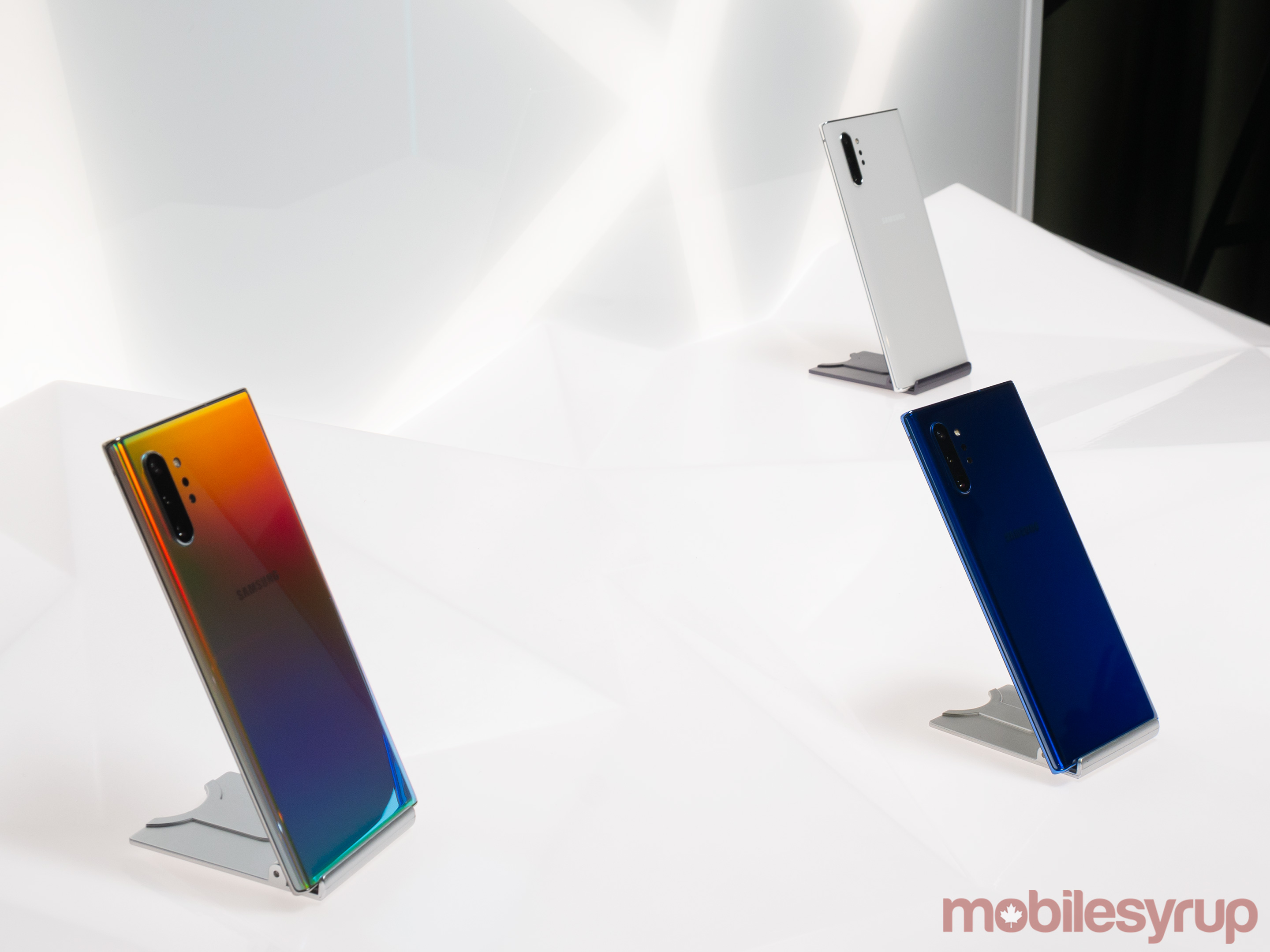 Samsung has also taken an interesting approach with the Note 10 and Note 10+’s colours this year. Canada gets ‘Aura Glow,’ a silver-like hue that looks interesting in varied light, the stark ‘Aura Black’ and the very clinical ‘Aura White.’

The colours not making their way to Canada this year include ‘Aura Blue,’ ‘Aura Pink’ and ‘Aura Red.’ It’s unclear why Samsung opted to only release specific Note 10 colours in the Canadian market but this has been standard practice for the company over the last few years. 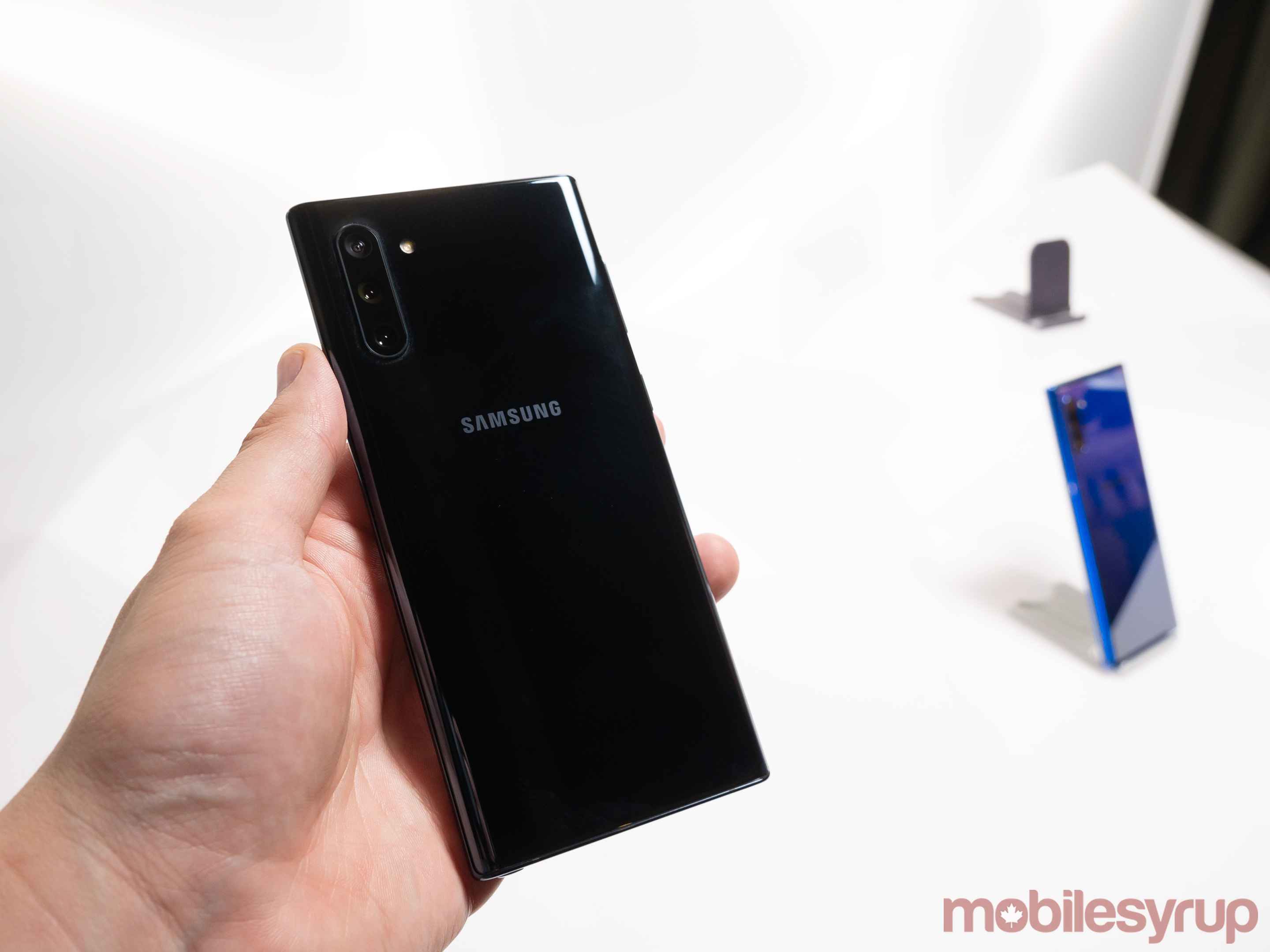 Other technical specifications and features worth mentioning include Wi-Fi 6 support, Qualcomm’s Snapdragon 855 processor and ‘Dex for PC,’ a new feature that works very similarly to Apple’s Side Car, allowing users to connect their Note 10 to any PC or Mac and have Dex open as an app on their desktop.

In the U.S., Samsung is selling a 5G version of the Note 10+ exclusively through Verizon for a limited time. As expected, the 5G Note 10+ isn’t making its way to Canada given 5G networks won’t be publicly available here until 2021. 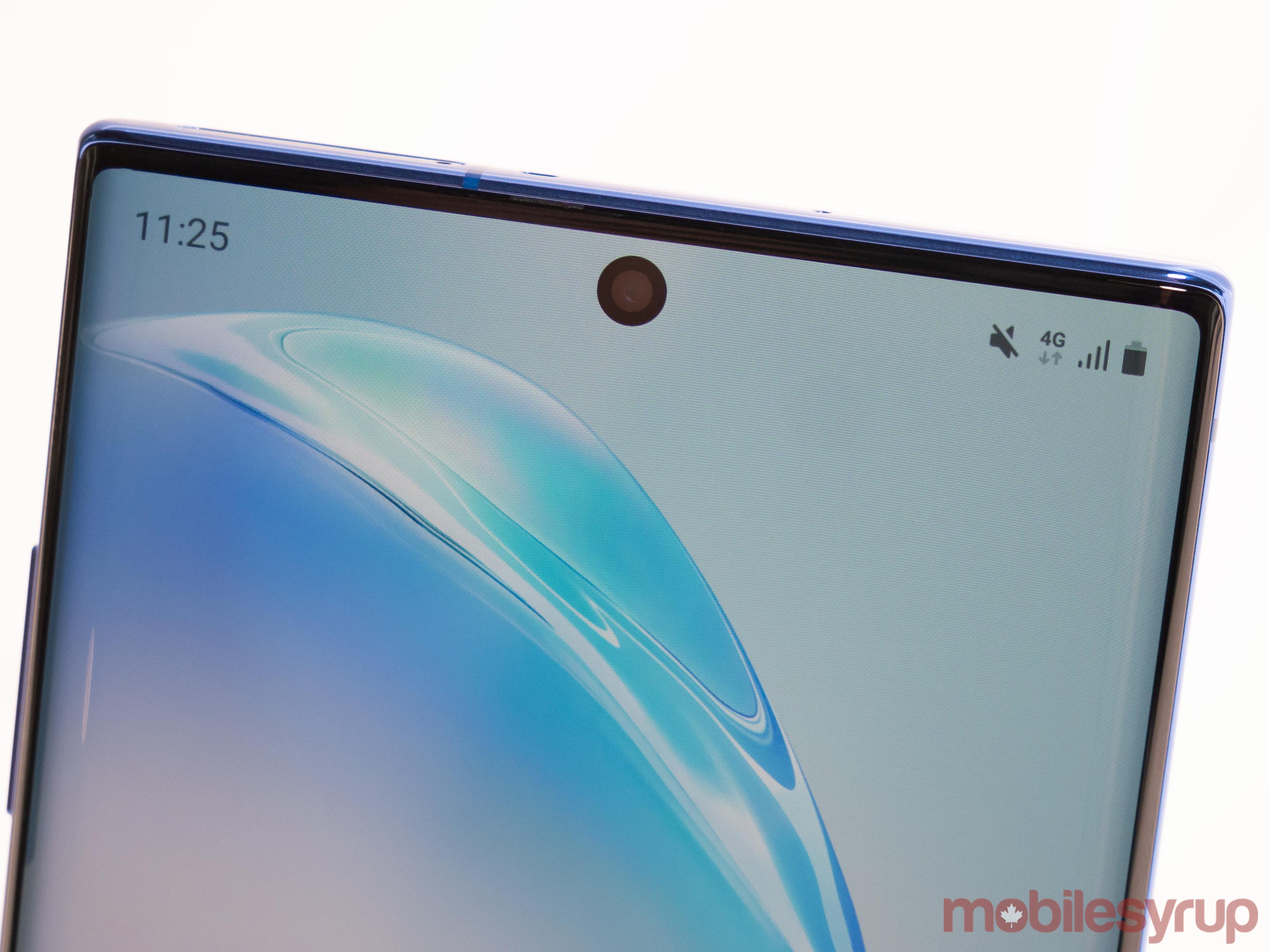 The Note 10 starts at $1,259 CAD, while the Note 10+ costs $1,459. Colours available in Canada include Aura Glow, Aura White and Aura Black. The standard Note 10, which will only be sold at Best Buy and Samsung experience stores, is only available in Aura Black and Aura White.

We’ll have more on the Note 10 and Note 10+ in the coming weeks, including a full review of the smartphone.