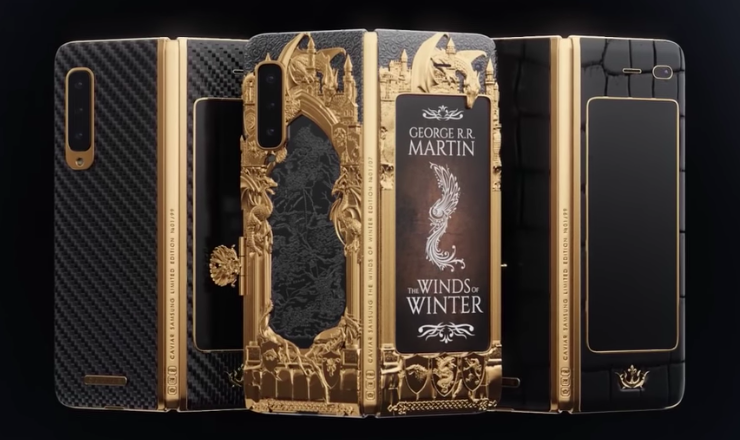 It seems that not everyone wants to remake Game of Thrones season 8.

Caviar, a Russian company specialized in throwing leather, gold, jewelry at phones to make them more expensive, has celebrated the conclusion of the famous “A Song of Ice and Fire” Saga by opening pre-orders to its Game of Thrones-themed Galaxy Fold.

But, unlike the ending that burned many of its fans’ heart, the Galaxy Fold Game of Thrones edition from Caviar will probably burn your bank account.

In case the Galaxy Fold is not flashy enough, the Caviar Game of Thrones edition, with its eye-watering price of just $8,180 USD (around $10,988 CAD), is almost four times more expensive.

The company plans to customize just seven copies of this foldable extravaganza dedicated to the number of Westeros kingdoms. However, the first copy is sent to George Martin himself, leaving only six copies for the most diehard Game of Thrones fans who have money to burn. If you are not one of the over 1 million people who petitioned HBO to remake season 8, you can still be one of six that has the same phone that George Martin carries.

But, in case you dislike Season 8 so much and you’re no longer a fan of the HBO series, it seems Caviar has thought of that and will release a “normal” Galaxy Fold covered in gold, carbon fiber and/or leather instead.

Per the press release, “the start of sales will begin with the opening of the official Samsung Fold series.”

Big surprise: ‘Escobar Fold 2’ phone is just a Galaxy Fold with a gold sticker on it