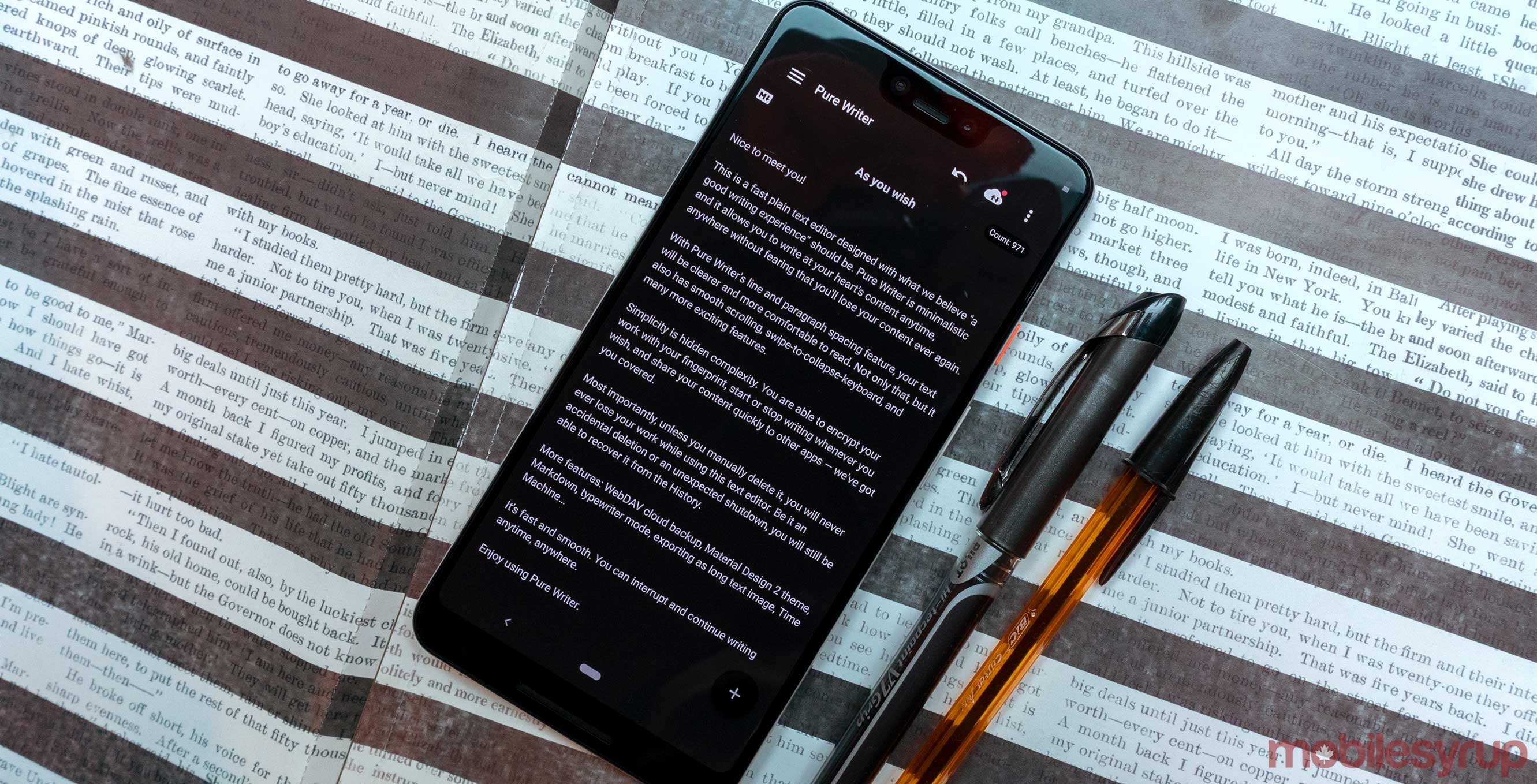 I’m going to start this one off by saying writing on your phone isn’t as bad as people make it out to be. There’s predictive text, swipe gestures and you can do it while laying in bed.

Now that I’ve said that, one of the best mobile plain text editors on Android is called Pure Writer. Its clean experience makes writing on your phone surprisingly satisfying. On top of that, it takes saving your work to an extreme. 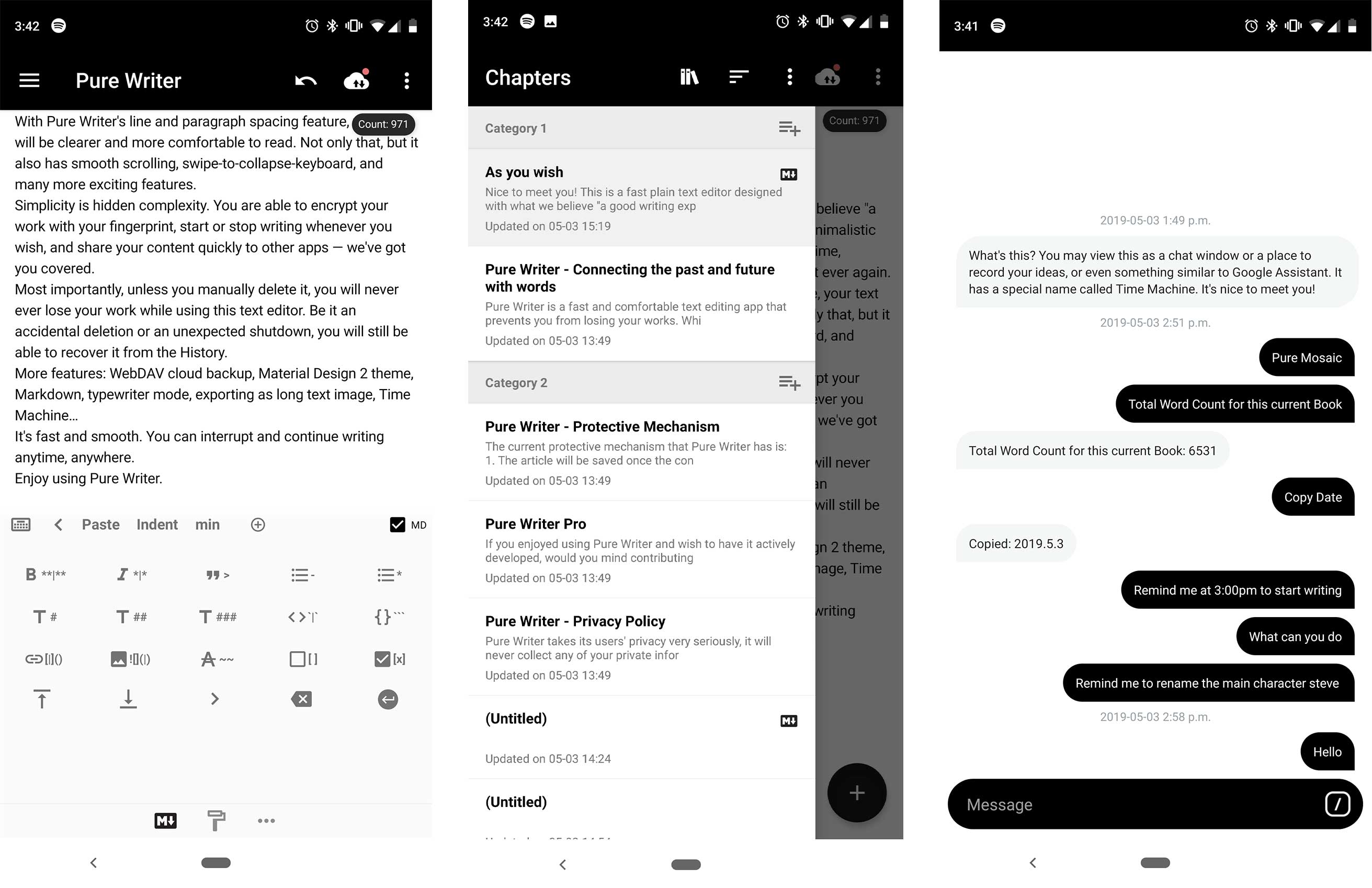 The app is simple, you add ‘Books’ that can have ‘Catagories’ and ‘Chapters’ inside of them and then pad them out as you see fit.

When you begin writing there’s a small bar above the keyboard that holds a few formatting options like pasting, indenting and the ability to move the cursor left one space. There’s also a tiny plus icon that allows you to add text shortcuts to the quick access bar. Say you were writing a story where the leading character’s name was Dandldorf. You could set a shortcut so every time you write Dan the app replaces that with the character’s actual name.

There’s a keyboard icon on the left side of that bar. Tapping on it expands the bar to reveal all the formatting tools. There are a ton of more option in this menu like bolding, italics, quotes, lists and more.

Having quick access to all the formatting tools is where Pure Writer excels. It makes formatting, one of the harder things to accomplish on mobile, a breeze.

Another useful section of the app is that on each page is the ‘Time Machine.’ Swiping right on any page reveals another section where you save ideas for later. 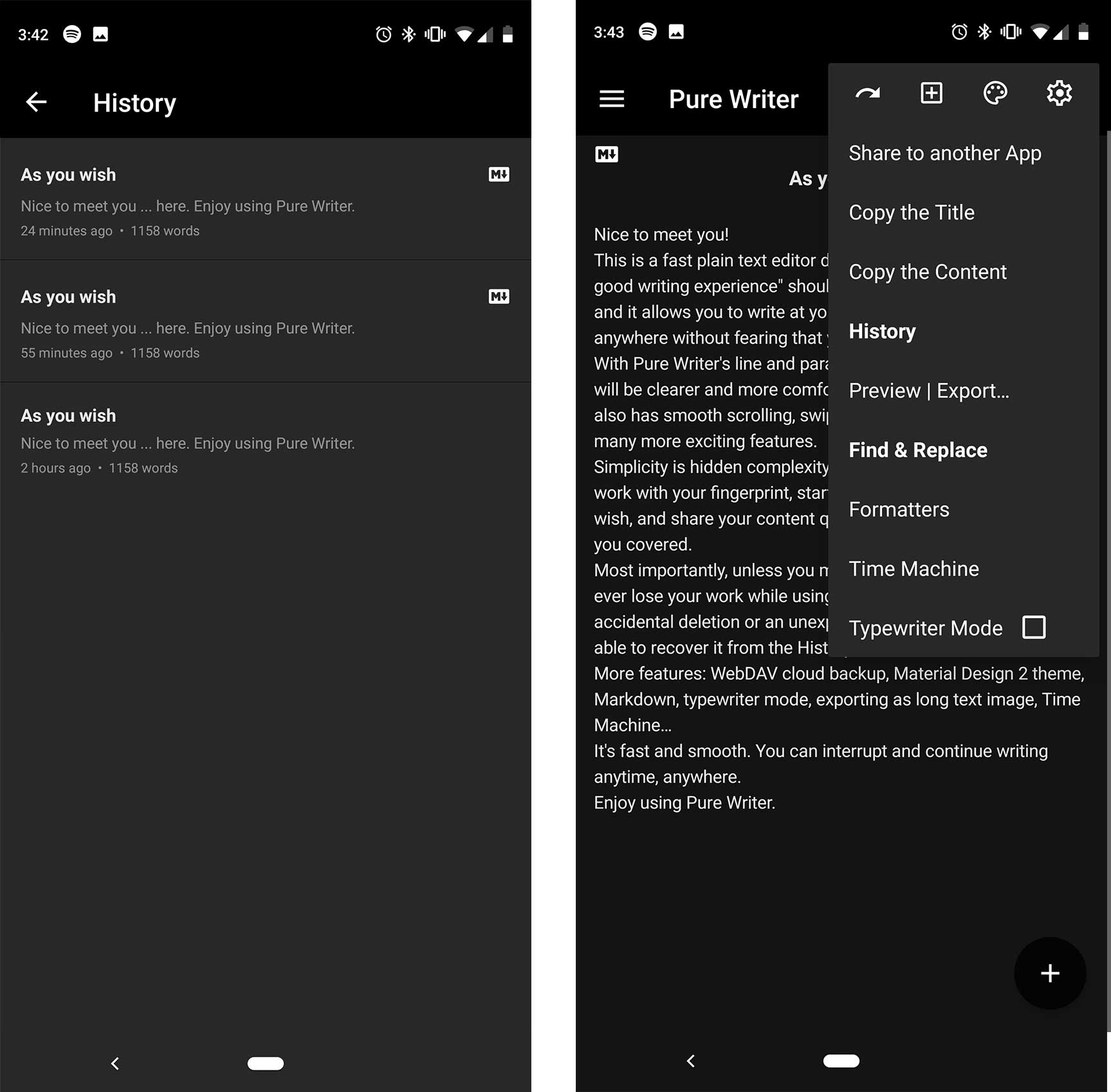 Another area where the app excels is keeping a history of all of your writing. So, unless you manually delete something, you’ll never have to worry about your hard work disappearing.

The app does this by saving all new content once it’s added to the page. On top of that, it checks to make sure your content is saved every two-seconds. If either of these functions fail, Pure Writer notifies the user that it didn’t save so they can do it manually. If none of these work you won’t be able to exit the app until you save, according to the Pure Writer page in the Google Play Store.

Finally, the app makes exporting and importing your work easy by linking to your Dropbox account. 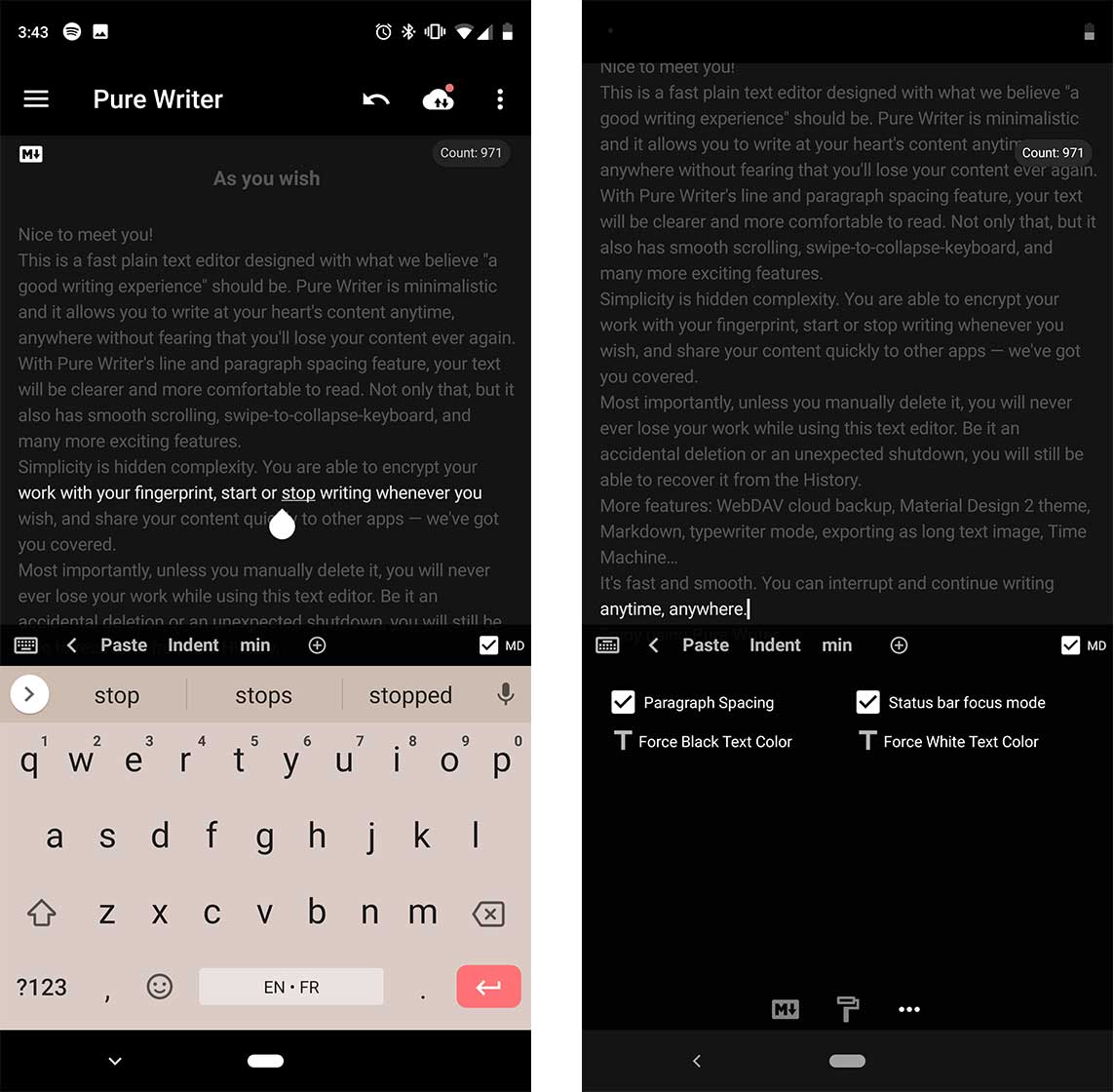 Some other cool features include a ‘Typewriter Mode’ that highlights the line you’re currently writing to make it easier to focus on.

Next up there are 18 themes included in the free version of the app, including a black theme to save battery on OLED devices.

There is even a focus mode that hides the icons in the status bar along the top of the phone to keep your screen as distraction-free as possible. Pairing this with your phone’s ‘Do Not Disturb’ function is excellent.

When you dive into the app’s settings there are a few other features worth highlighting.

Firstly, you can lock down your app with a fingerprint. Next up, you can keep the screen on at all times when in the app. 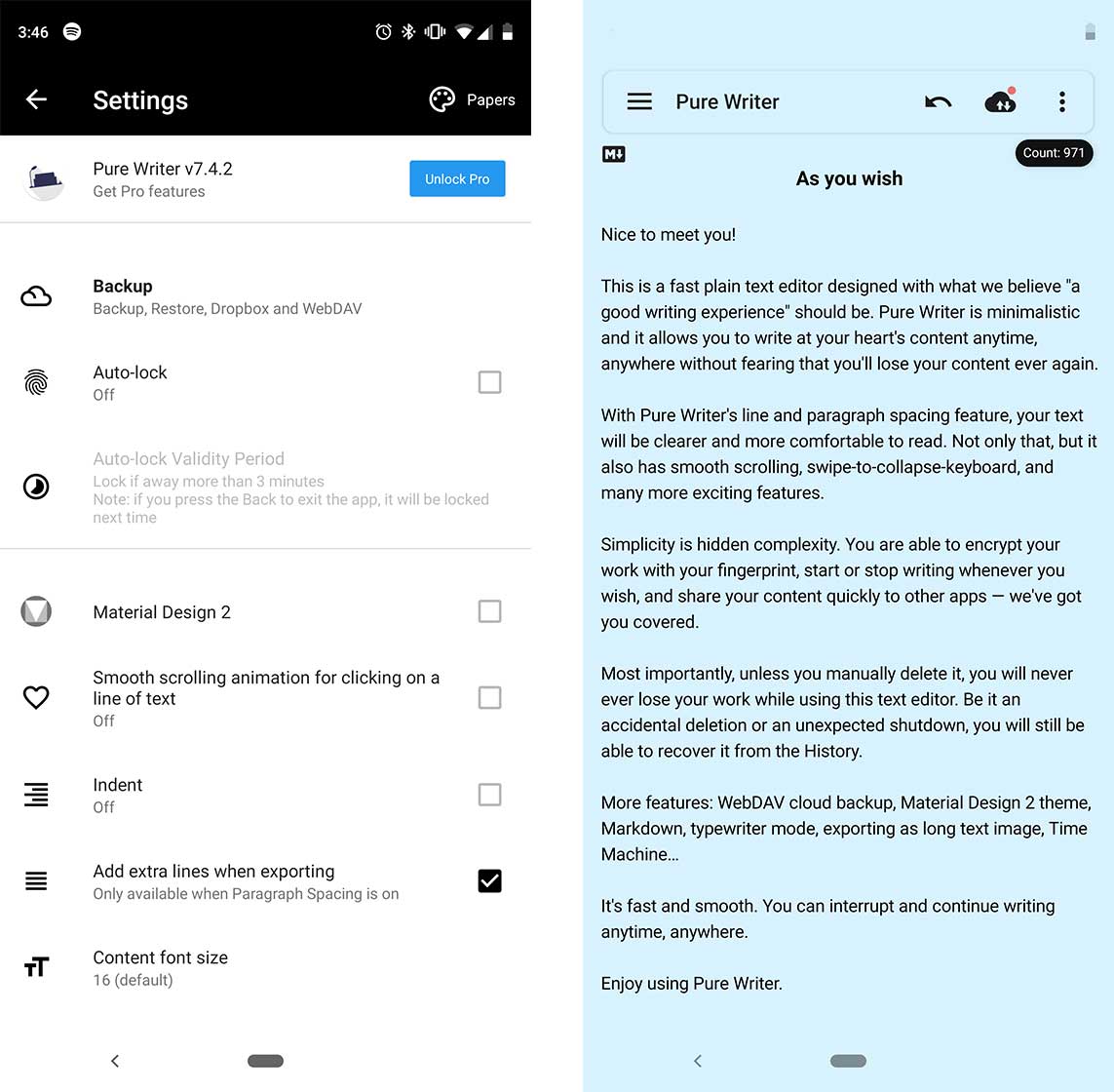 Finally, there is a feature that lets you can turn on a separate interface design that makes the main writing page use Google’s modern Material Design.

Overall this app is fantastic. Its selection of writing features is top tier, but that doesn’t mean it isn’t without issues. Since it’s so feature packed it’s sometimes hard to find the setting or function you want. With time this becomes less of a problem, but I think it’s worth pointing out.

The app has a 4.7-star rating on the Google Play Store and it’s free to download on Android.