Clicky and tactile, it's hard to beat this spill-proof, light-up keyboard 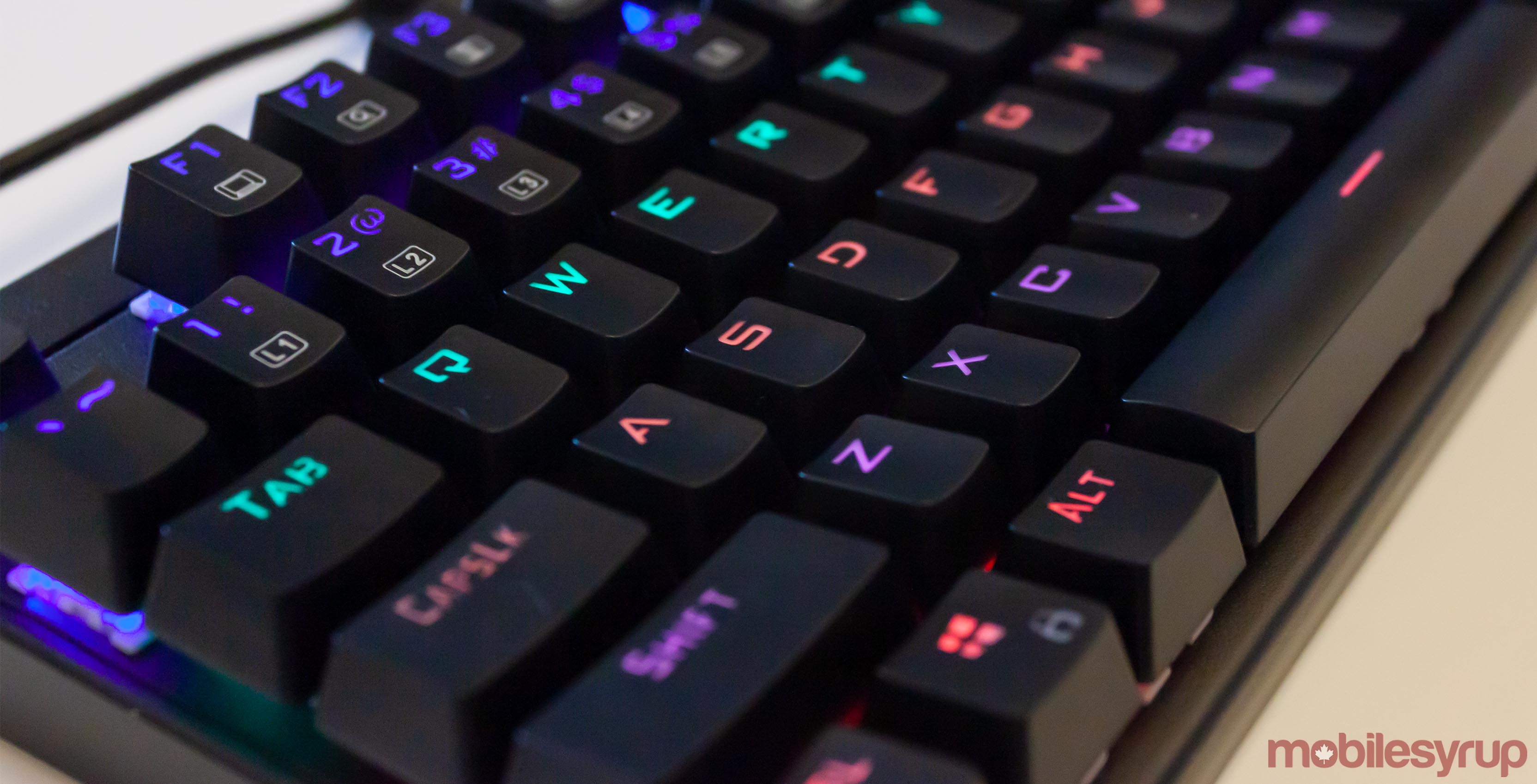 These days, mechanical keyboards are all the rage. They’re the go-to for PC gamers, beloved by typists and the evoke a nostalgia for the early days of computers.

However, good mechanical keyboards can be expensive, especially if they use high-quality switches. Keyboards with switches like the vaunted Cherry MX Blues — considered the best for typing — will often run you between $100 and $300.

Thankfully, companies like Aukey are offering more budget-friendly options, and they’re quite good. 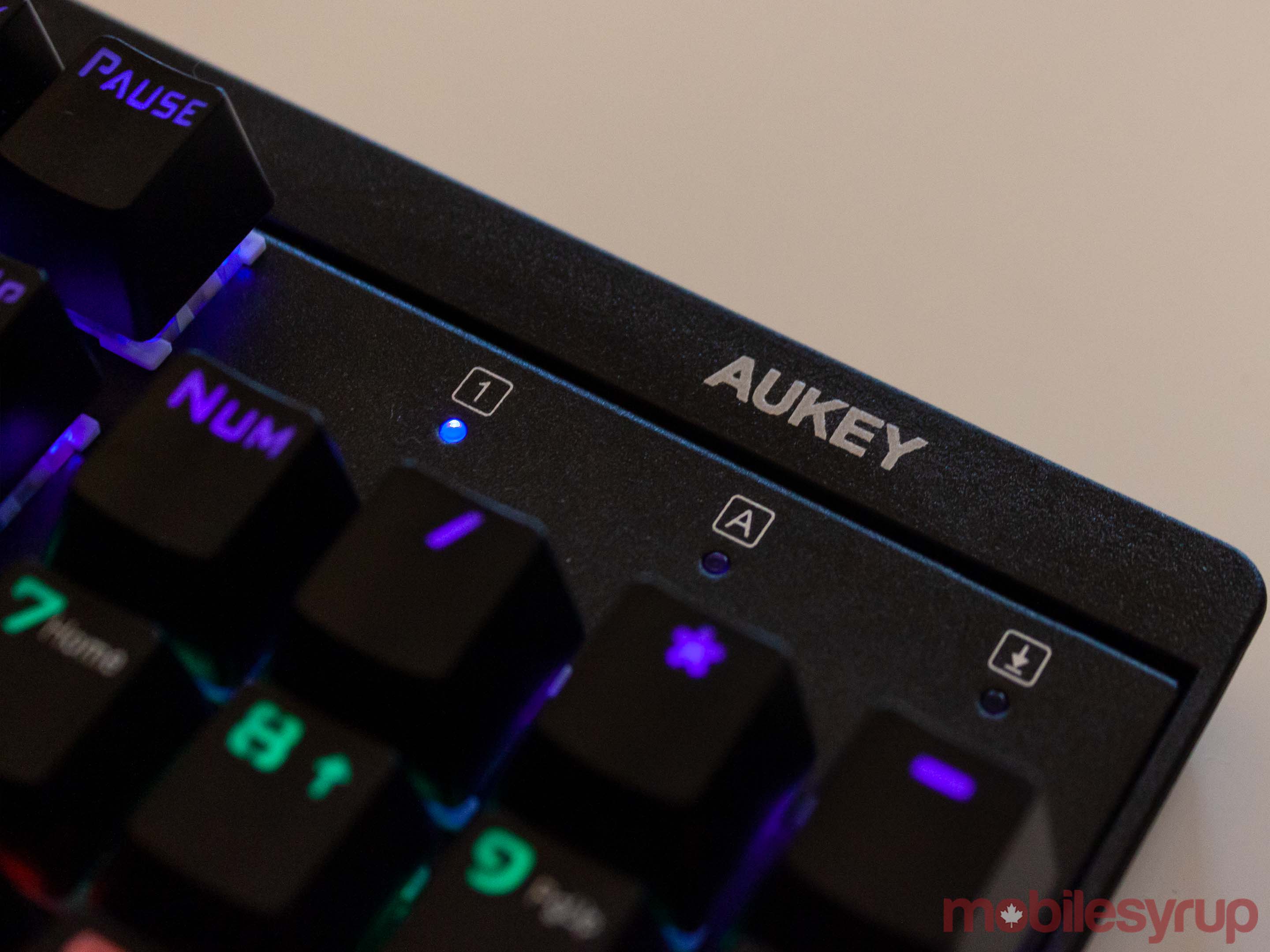 I’ve spent the last week typing on Aukey’s KM-G6 keyboard, which currently retails for $48.99 on Amazon. Aukey chose to use Outemu Blue switches instead, which feel almost identical to the MX switches but come at a lower price.

That means the KM-G6 feels premium without breaking the bank. The typing experience is fantastic. The keys are incredibly tactile. They are also loud, and while I love it, the people sitting near me don’t.

Along with the excellent typing experience, Aukey packed several other features into the keyboard.

The KM-G6 features six-colour LED backlights, one colour for each row of keys. Additionally, the keyboard features several lighting patterns along with customizable backlights. 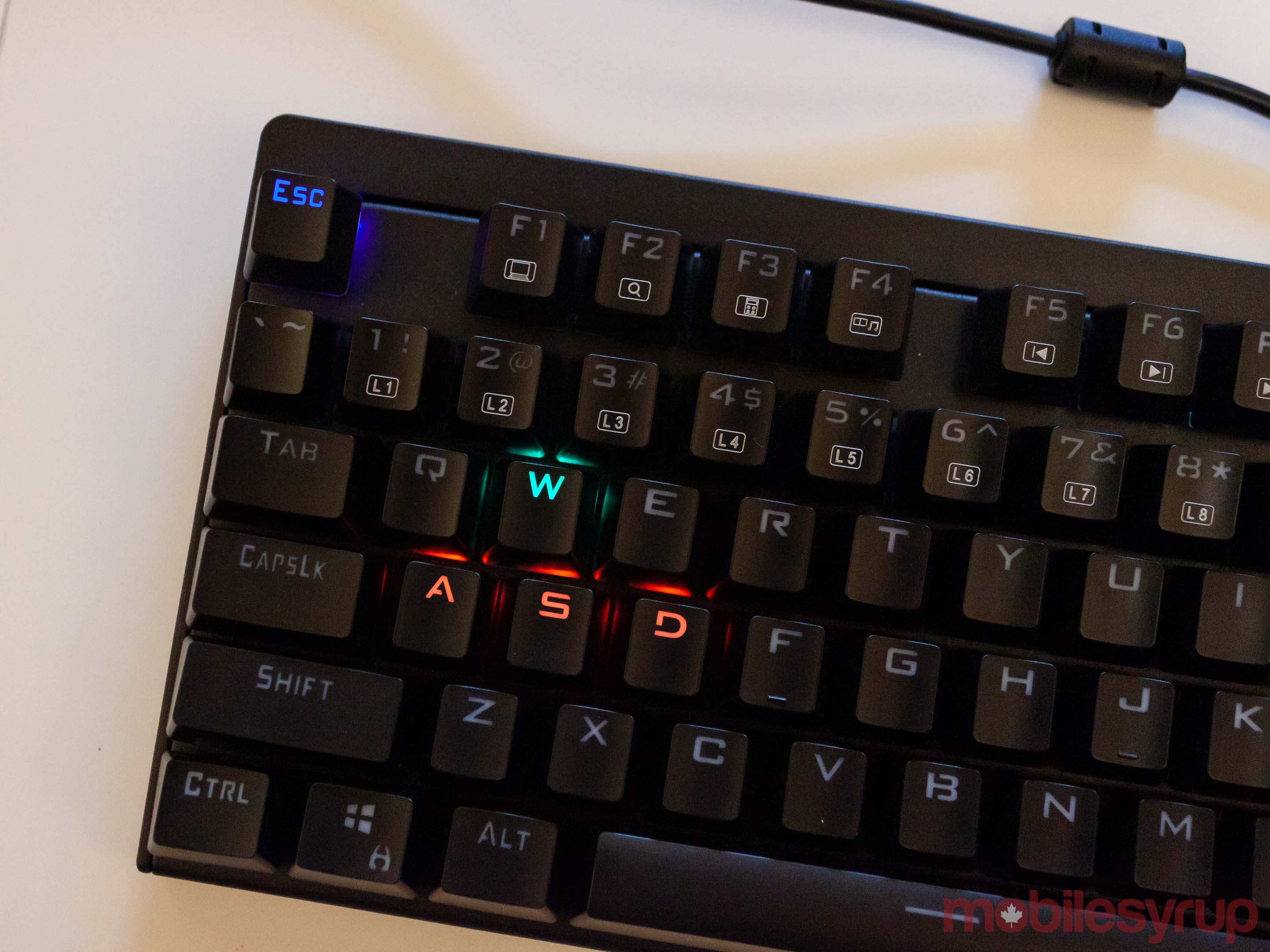 Ten distinct backlight patterns correspond to popular video-game genres. There are layouts for first-person shooters that highlight the W, A, S, and D keys and MOBA layouts that highlight Q, W, E, R, D and F.

Further, the keyboard has several animated lighting patterns users can cycle through. There’s the primary backlight for all keys, but users can also have a key light up when they press it.

My favourite was a ripple effect that sends a wave of light out from the key I press.

However, I would love a small software component to control and adjust the lighting options. The current system has you cycle through them on the keyboard. It isn’t an ideal system, as it’s hard to tell how many options there are and what they all do. 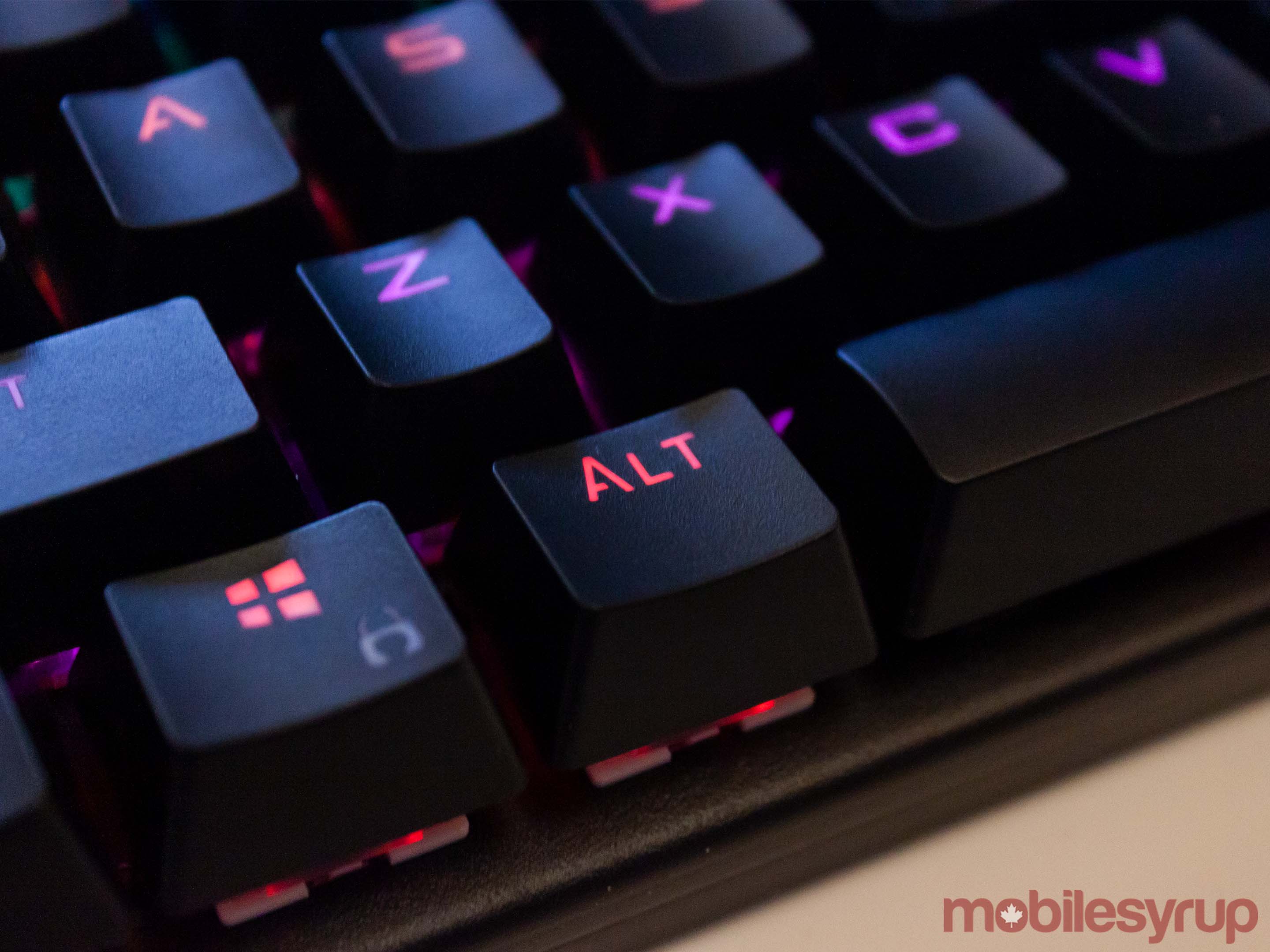 Aukey also made the keyboard spill-proof, a fantastic addition to any keyboard. There’s nothing worse than spilling liquid on a keyboard. Not having to worry about damage is a bonus.

Finally, the keyboard has full 104 N-key rollover. This means the keyboard can scan and receive input from every key at once.

KM-G6 looks good, except for the font

The keyboard is made primarily out of black plastic. It looks good and feels heavy. However, at some angles, you can see the white plastic around the base of the switches. It seems odd when the rest of the keyboard is dark.

Furthermore, the font on the keycaps isn’t great. It isn’t the worst font I’ve seen, but it still isn’t ideal. I’d expect to see this kind of type on the cover of an old science fiction novel, not a keyboard.

The KM-G6 also lacks some other small features I’ve come to expect from other keyboards. The keyboard I typically use with my personal desktop has USB ports and a headphone jack so I don’t have to go digging around the back of my computer. Those would be nice to see here, but by no means are they deal-breakers. 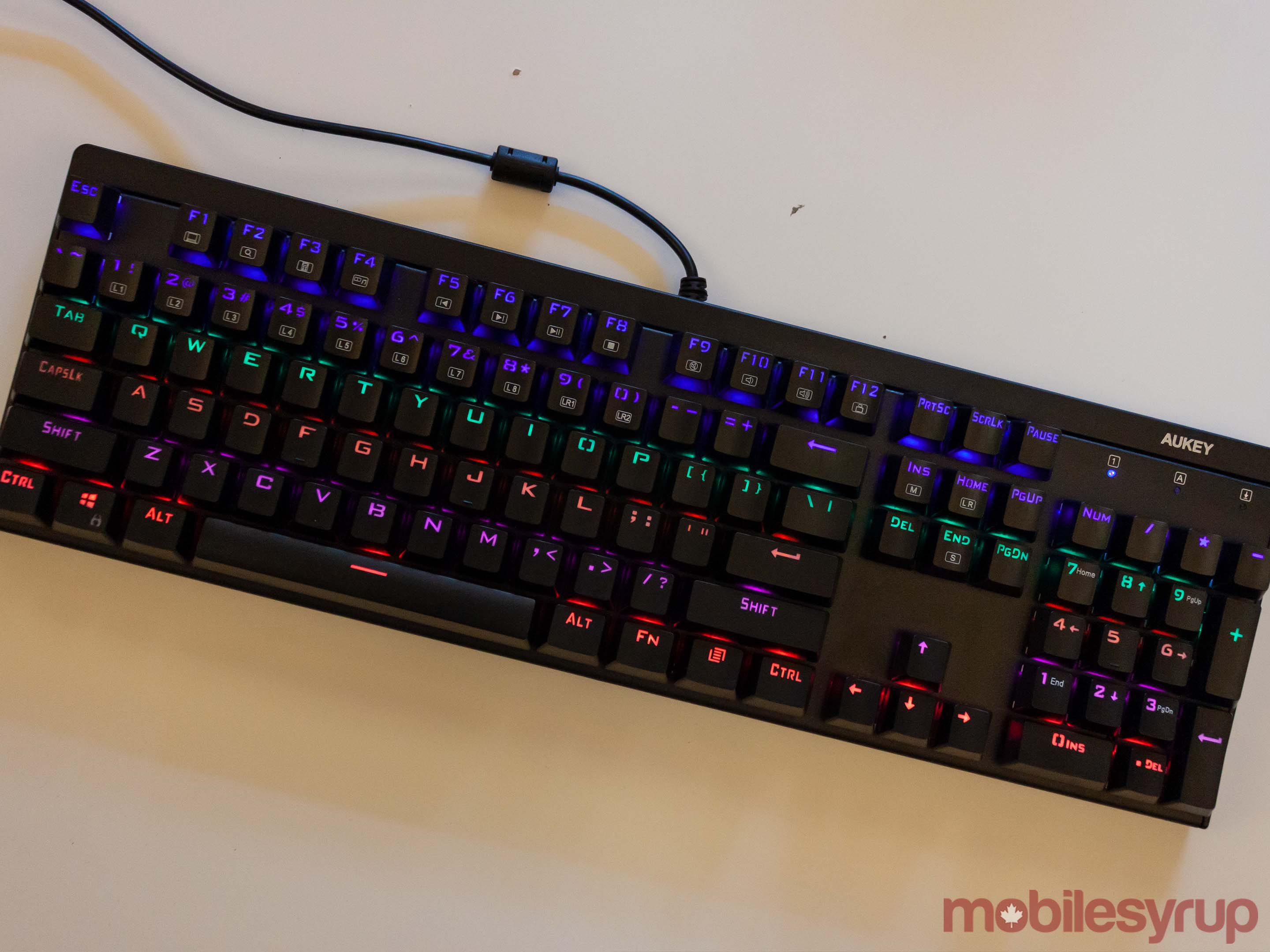 Overall, the Aukey KM-G6 is impressive for its price. If you like clicky, tactile keyboards for typing or gaming, you can’t go wrong with this.

It features some fun and creative additions as well, like LED backlighting and water resistance.

Overall, I think the KM-G6’s good far outweighs the few cons. I’d highly recommend it for mechanical keyboard lovers on a budget.