How Ubisoft Toronto developed its bold new IP, Starlink: Battle for Atlas [This Week in Gaming]

It’s an opportunity for the team to truly make a name for itself, after its debut title, 2013’s Splinter Cell: Blacklist, was very critically well-received but underperformed sales-wise. Since then, Ubisoft Toronto has assisted in the development of many other high-profile Ubisoft games, including Assassin’s Creed Unity, Watch Dogs 2 and Far Cry 5.

Starlink is also a bold attempt from Ubisoft Toronto to revive the toys-to-life genre, which was once made popular by Skylanders but has since been all but abandoned following the cancellations of the likes of Disney Infinity and Lego Dimensions.

In Starlink, players can place real-life toys on a controller mount to deck out their in-game ship with powerful new components, although Ubisoft Toronto is giving players the option to purchase these parts digitally instead.

To get a better look into what went into making such an ambitious new intellectual property (an increasing rarity in modern gaming), MobileSyrup sat down with Laurent Malville, creative director on Starlink, at the game’s recent launch event in Toronto.

Question: Starlink is quite a deviation from other Ubisoft games, especially the last title your studio made. The company has never really done a 3D scrolling shooter like this before. How did your team settle on the idea for Starlink?

Laurent Malville: It’s super interesting because it’s not like it was one and only idea at the beginning. It sort of built itself as we built the team. At the beginning, the mandate for this team was super open and wide. It was kind of a mini experiment, so there were a lot of prototypes being done in every direction with different technologies and different ways of interaction, whether it’s with a camera or controller.

Progressively, there was a collection of prototypes, but there was one that was standing out from the others, and it was this idea of Lego starships with copper wires on the breaks, with some circuit boards custom-assembled on a Wii Remote.

This prototype resonated with people a lot and they started to grab it and interact with it. Right from the beginning, you were connecting a part and it was appearing on the screen. That was something that was really interesting and new, and even after we made other prototypes, we were coming back to this prototype. And so when it was time to go to Paris and present the game at Ubisoft HQ, it was this prototype that kept coming back in the team’s mind. 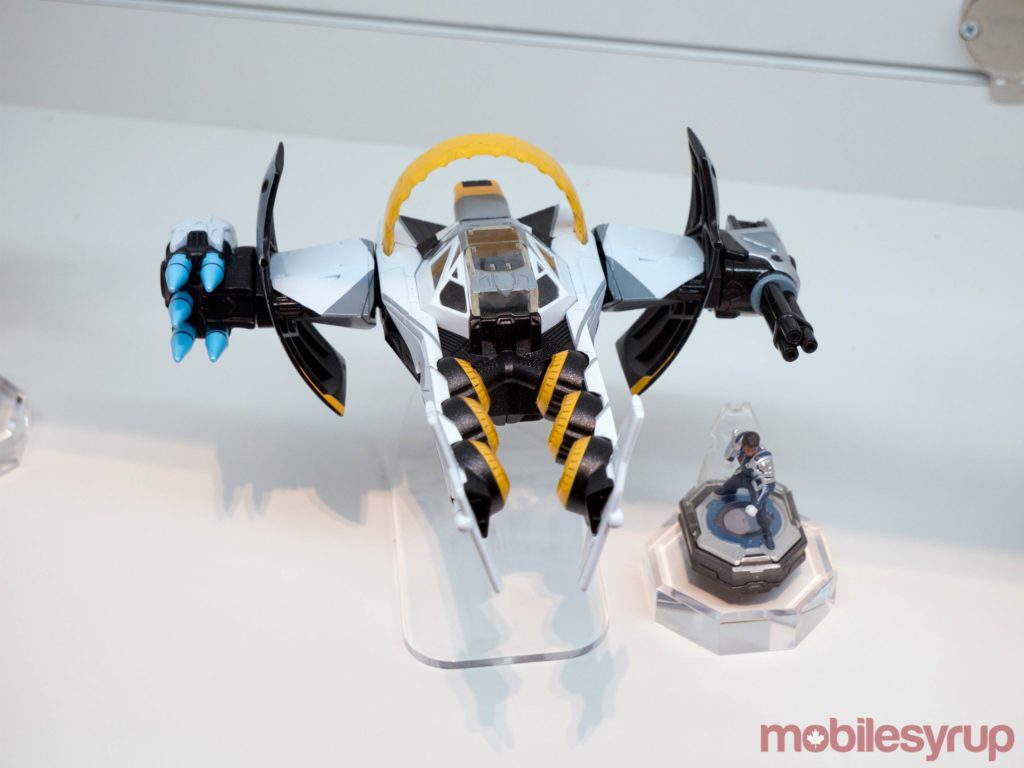 Eventually, we solidified what we wanted to do and we ended up on three big pillars. The first pillar, of course, is the modular starship on your controller. It had to be part of the experience, it couldn’t just appear and stay there, it had to mean something.

The second pillar was this living, open star system — these real circumnavigable planets, not a flat map, that you can land on from anywhere and take off from anywhere. And it’s alive, so there are factions revolving in it, and the [villainous] Forgotten Legion is actively trying to conquer those worlds as you’re playing the game.

We didn’t want one of our level designers to scrap a scene after one particular spot, we wanted the system to feel open for a lot of emergent things to happen as you travel through the Atlas system. 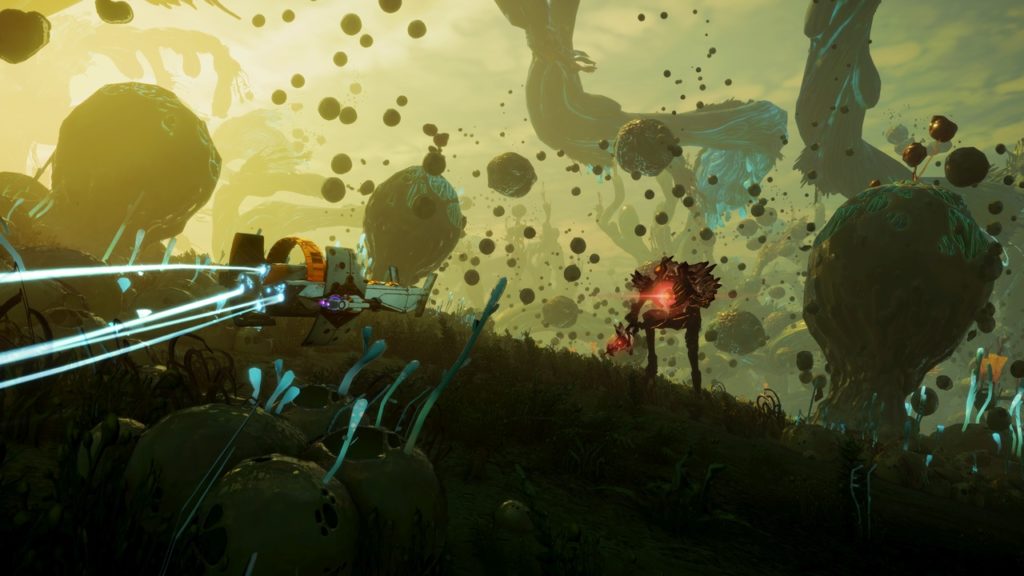 Finally, our last pillar was creative combat. It was this idea of mixing and matching your pilot ability and your weapons and the energy they contain to discover new combos and playstyles. That extends to the mod systems you can create for the different starships.

Something we discovered doing the game that the core audience would be younger players, but we discovered during development that they’re really savvy.

They play really deep games. They want open-world AAA experiences with RPG mechanics, so this is why at one point where we’re like ‘let’s make a game that we love and want to play, because this is what young players want to play as well.’

The modular ship system is such a central mechanic of Starlink. Your team seems to be taking a unique approach to it with the toys-to-life angle, but is there a concern that this genre has already run its course?

Malville: Since the beginning of the project, the idea was really to create something new and innovative that, when you interact with it, you don’t feel like it’s déjà vu, you feel like it’s ‘whoa, how does that work?’ Instantly, your curiosity is lit up and you want to discover more, and that’s been the core of development. 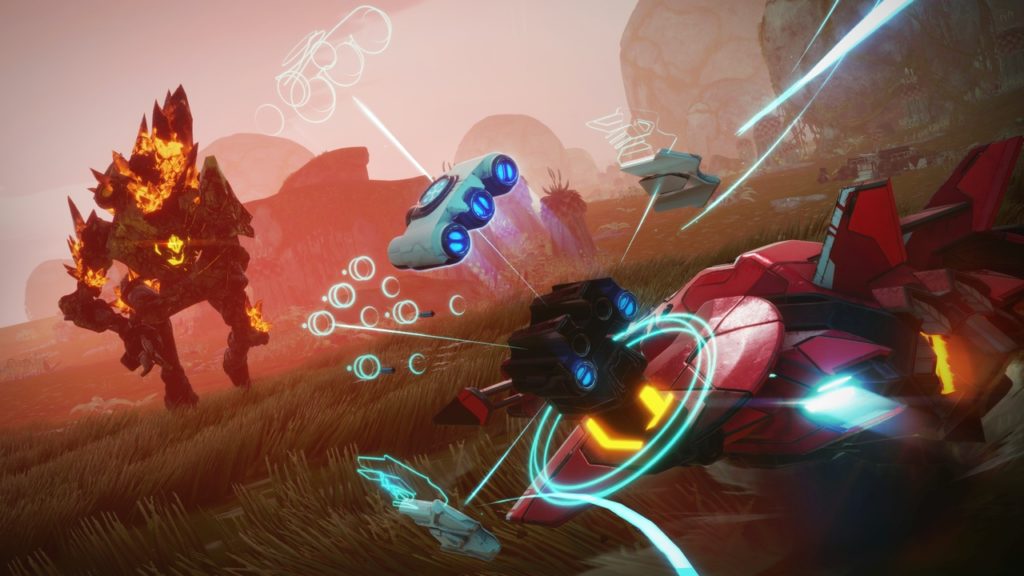 That’s for the modular starships themselves but that’s also something we did for the game. Even this idea of dynamic progression of the Forgotten Legion was something we felt was new and never done before in a game for younger players and also adult players.

When something is fun, we never really do anything out of fear. Of course we looked at what was happening in the industry, but we think we have something really new and fresh that is exciting and doesn’t feel like something you’ve played before.

Once you’d decided on the concept and optional toys-to-life elements, what were some of the sources of inspiration during development, either from other games or outside of the medium?

We had lots of influences — some that you might not have thought of, actually. For example, like I said before, it was important that all of the starships mean something in your gameplay. You’ll notice when we launch the game, there’s like the starter pack, four ship packs, four weapon packs, four pilot packs. It’s not endless. It was very important that we have a reachable collection for it to make sense. And one of the references for us on that was card games.

A lot of us in the team play a lot of card games and board games, and what we thought was fascinating with card games is you never really have that feeling of being stuck when you get a new pack of cards.

Each pack is a new opportunity and you want to collect something, there’s that kind of positive reinforcement about getting it because it expands your strategy. That’s why you can play the entire game with your starter pack and getting new ships doesn’t unlock new planets, but it enriches your combat strategy and playstyle. Card games were a big inspiration for that.

I’m sure another inspiration was Nintendo’s Star Fox series. That’s why it must be exciting, especially as a Toronto developer, to partner with a game giant like Nintendo and bring missions, characters and ships from the iconic Star Fox franchise to Starlink on the Switch. Can you tell me about how that collaboration with Nintendo came to be and what it was like to work with them?

Malville: For us, it all started at E3 2017. Matt, my producer on stage at the Ubisoft conference, revealed the game for the first time. We later had a behind-closed-doors demo at the Ubisoft booth. It was really cool and we had a lot of people coming by to see what the game was about. At the end, one of the Nintendo representatives came by and asked us if it was ok if they could bring more representatives to check out the game, and we said ‘yes, of course!’

Then we came back to Toronto and several weeks later, we learned from Ubisoft HQ that we were invited to present Starlink at Nintendo HQ in Kyoto, Japan to [legendary game designer Shigeru] Miyamoto and the original developers of the first Star Fox.

It was crazy for us, oh my god! I remember we worked on the presentation like crazy because we were invited not only to present Starlink but also what a Star Fox collaboration would mean. We worked on that and brought a 3D-printed, spraypainted grey Arwing, our very first rudimentary look at what the technology inside the Arwing [toy] would mean. At the end, Mr. Miyamoto explained to us that he understood what we were doing. He thought it was better for the players that they could have that freedom of building [starships]. 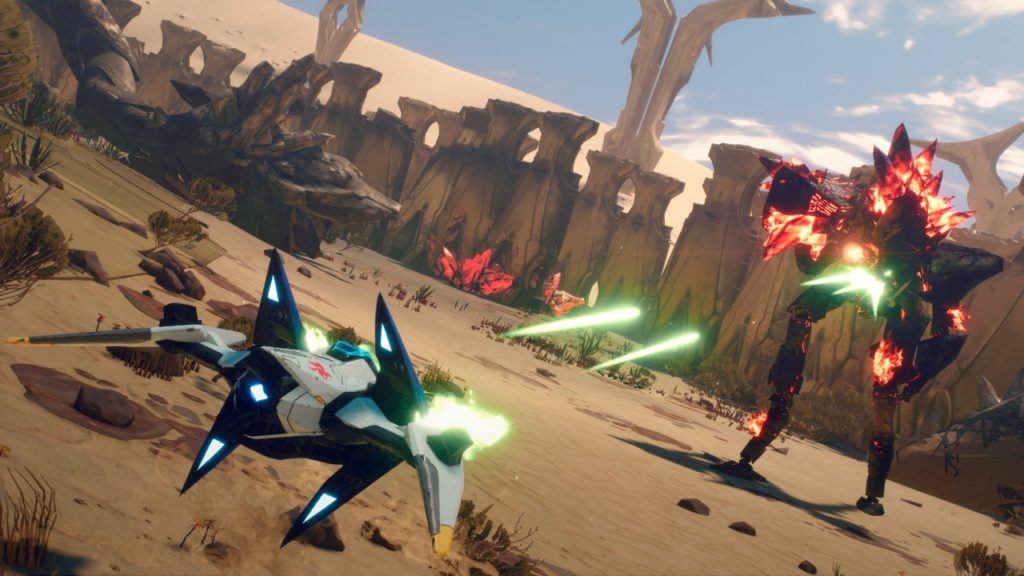 We came back to Toronto and a couple of weeks later, we were told we were greenlit to do this collaboration with Nintendo. And honestly, it’s been amazing. At Ubisoft, we’re big fans of Nintendo, but working with them, it’s another level, it’s amazing.

Starlink: Battle for Atlas will launch on the PlayStation 4, Xbox One and Nintendo Switch on October 16th. A starter pack (which includes the game and a few figures) will cost $99.99 CAD, while additional packs will begin at $12.99.