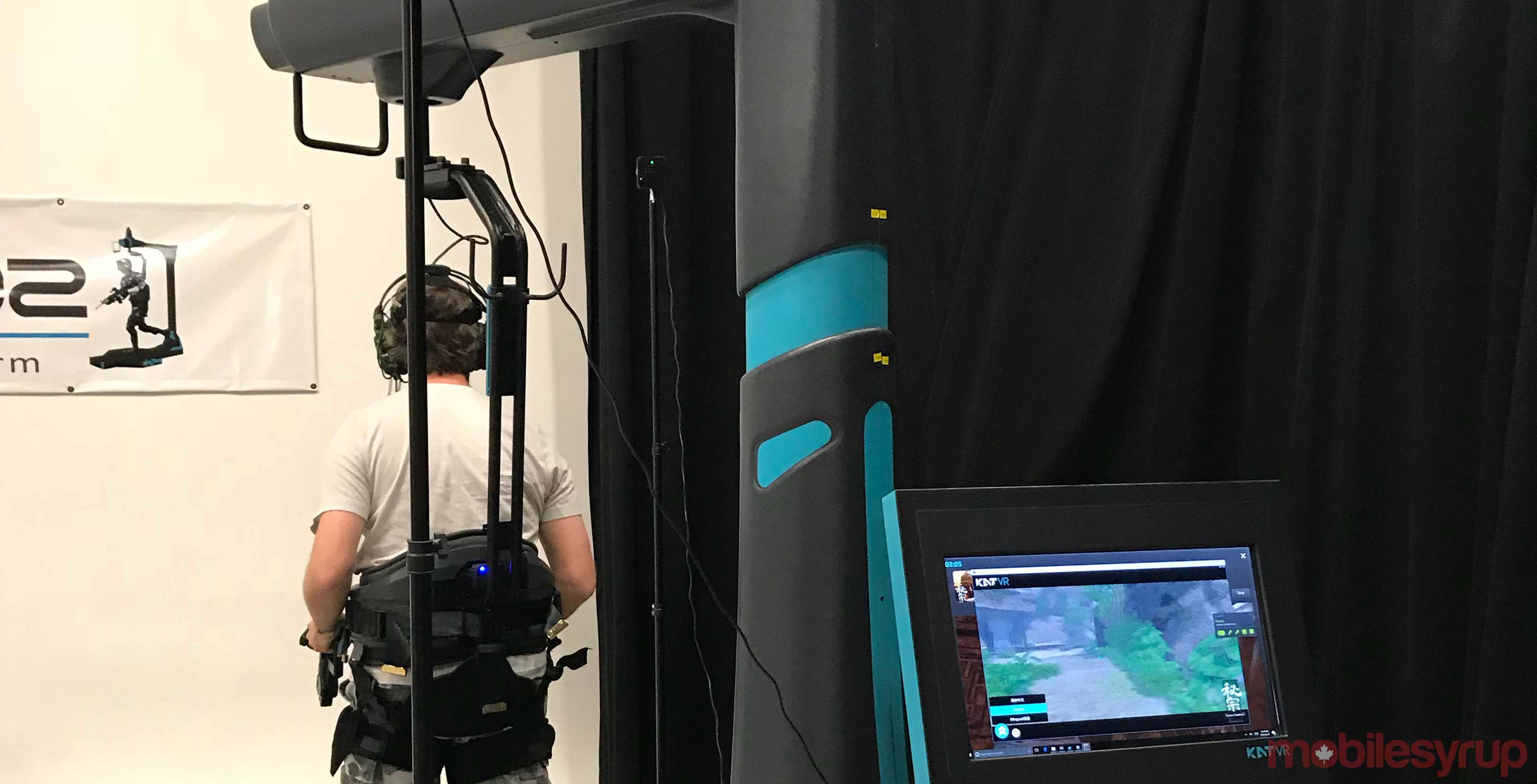 Ready Player One may be a divisive property, but I think most people can agree that the idea of a full virtual reality OASIS-esque rig is pretty neat.

While we’re by no means at that level of technology right now, the KAT Walk device is certainly an exciting first step towards that kind of VR future.

At last week’s VRTO conference in Toronto, I got to try out a demo of the omni-directional treadmill offered by local VR arcade VRulez. All in all, I was rather impressed by the experience, despite some shortcomings.

To start, I had to strap two small motion sensors to each of my feet. The base of the treadmill is deliberately slippery to make it easier to slide your feet, meaning you need to use a small stepstool and handlebar to get onto it. Once you’re standing on the rig, VRulez staff will strap a harness around your torso to secure you in. Finally, the VR headset (with accompanying pairs of motion controllers and headphones) will be placed on your head.

In spite of all the equipment attached to or hanging off of me, I found using the rig to be surprisingly comfortable. The harness is snug and keeps you safe and secure, while the headset itself fit well enough over my bespectacled head. That said, movement itself feels a bit awkward at first. You have to lean in the harness while shifting your feet to get your in-game avatar to move, which initially feels unnatural.

Turning in particular sometimes felt clunky and unresponsive when I tried to turn my body left or right when caught on a box or rock. The woman in the demo below makes it look far simpler than it is. No doubt it will become easier with practice, but I could see it taking a bit of time to get there.

I did appreciate that you can control your character’s movement speed depending on how quickly you move your feet. Many VR games limit how fast the player can go in an attempt to reduce any motion sickness. Here, it’s nice that players are able to go at their own pace, so those less prone to feeling queasy can zip along, if they so choose.

Overall, while movement felt uneven at times, the precision of the shooting more than made up for it. In the game I got to try out, Esoteric Buddhism, I found myself exploring a dangerous jungle, equipped with nothing but two side arms. Fortunately, the HTC Vive’s excellent motion controllers helped me aim and fire my dual revolvers at ease.

With shooting tight and responsive, the challenge instead comes from the enemies. In my demo, I encountered flying bug creatures that zipped around in different directions, making it appropriately challenging to shoot them down.

I was also impressed with the presentation of the game. Some cheap-looking cartoon “cutscenes” aside, the jungle setting I was placed into was lush and lively. Trees bristled in the wind, birds chirped in the sky and distant waterfalls could be heard faintly crashing down, which all added to the immersion. Of course, the visuals suffered somewhat from VR’s unfortunate “screen door” resolution-downgrading effect, but overall, the world was a good-looking one.

As with any VR experience, there are some hurdles to overcome here. In the case of the KAT Walk VR, it’s often cumbersome movement controls that somewhat hamper the experience. Still, I’m intrigued by the concept. These are the first steps towards building VR technology that allows players to control movement through real life actions, and I’m excited to see where it goes next.

If you want to try this out yourself, VRulez is located in downtown Toronto at 171 Dundas Street West, with a Richmond Hill location coming soon. Altogether, the arcade has over 20 VR games that can be played, including Esoteric Buddhism, shooter Arizona Sunshine, racer Project CARS and even a PlayerUnknown Battlegrounds-esque multiplayer game simply called Battle Royale.

Alternatively, you can inquire about purchasing a smaller version of the rig (known as the KAT Walk Mini) for personal use, although that will likely set you back a few grand.