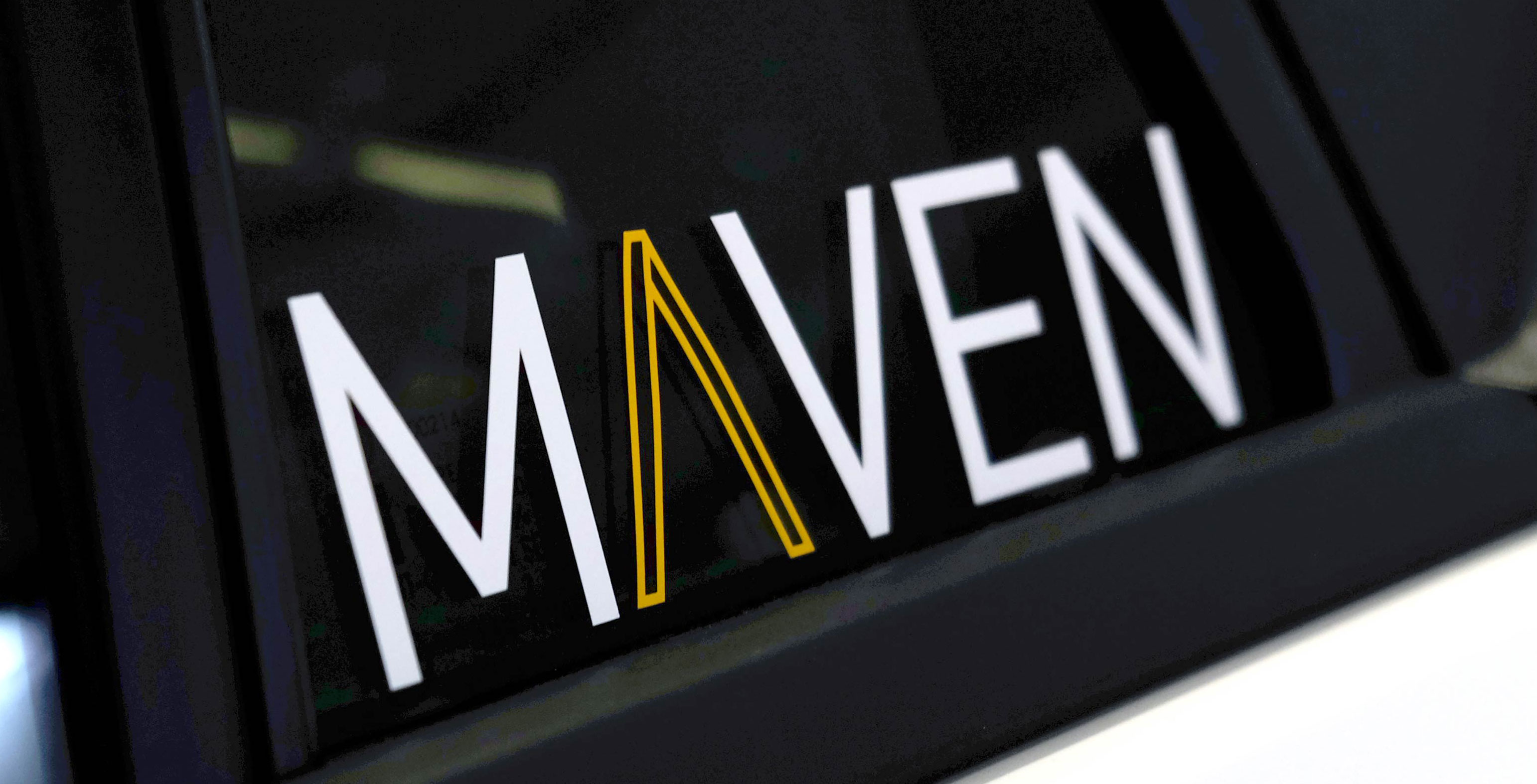 If Uber and Lyft were the disruptive ride-sharing forces that shook up the taxi industry, could Maven do the same in reinventing what it means to rent or own a vehicle?

To be fair, Maven can’t be credited with creating a market for on-demand car rentals. Others, like Zipcar and Car2Go have been at it for some time. There were even brands before them. AutoShare, one of the originals, was acquired by Enterprise in 2015 and rebranded as Enterprise CarShare.

Having now launched in Canada, starting in Toronto with a small presence in Kitchener-Waterloo, ON, the app-based service wants to stick out from the rest in certain key ways. But when looking at everything from face value, how might the experience differ?

Maven is a GM brand, and has been operating in the U.S. since January 2016, expanding to about a dozen cities in the country. Toronto’s inclusion has now taken Maven international.

I spoke to both Maven CEO Julia Steyn and City Manager for Toronto, Mark Latchford, to get a better idea of how the service would actually work.

Membership is free and users incur no fees to keep it active, though taxes do apply. There’s also a disclaimer on the site saying “additional fees may apply” without elaborating, but is at least in part a reference to being charged if returning a car late.

You must be 18 years of age, have a G licence (in Ontario) and have a valid credit card, which can also be a Visa Debit card, if you have that. At the moment, credit cards are the only method of payment. PayPal, debit and prepaid cards won’t be accepted.

Your card is charged from the moment your reservation actually starts, not when you drive off with the car. So, for example, if you’re 30 minutes late getting to the car from the time you had originally booked for, you’re still on the hook for the time lost. Latchford says that extenuating circumstances, like a family emergency, which may have taken hours from the start of the reservation might be credited, but it would require talking to Maven’s customer service first. 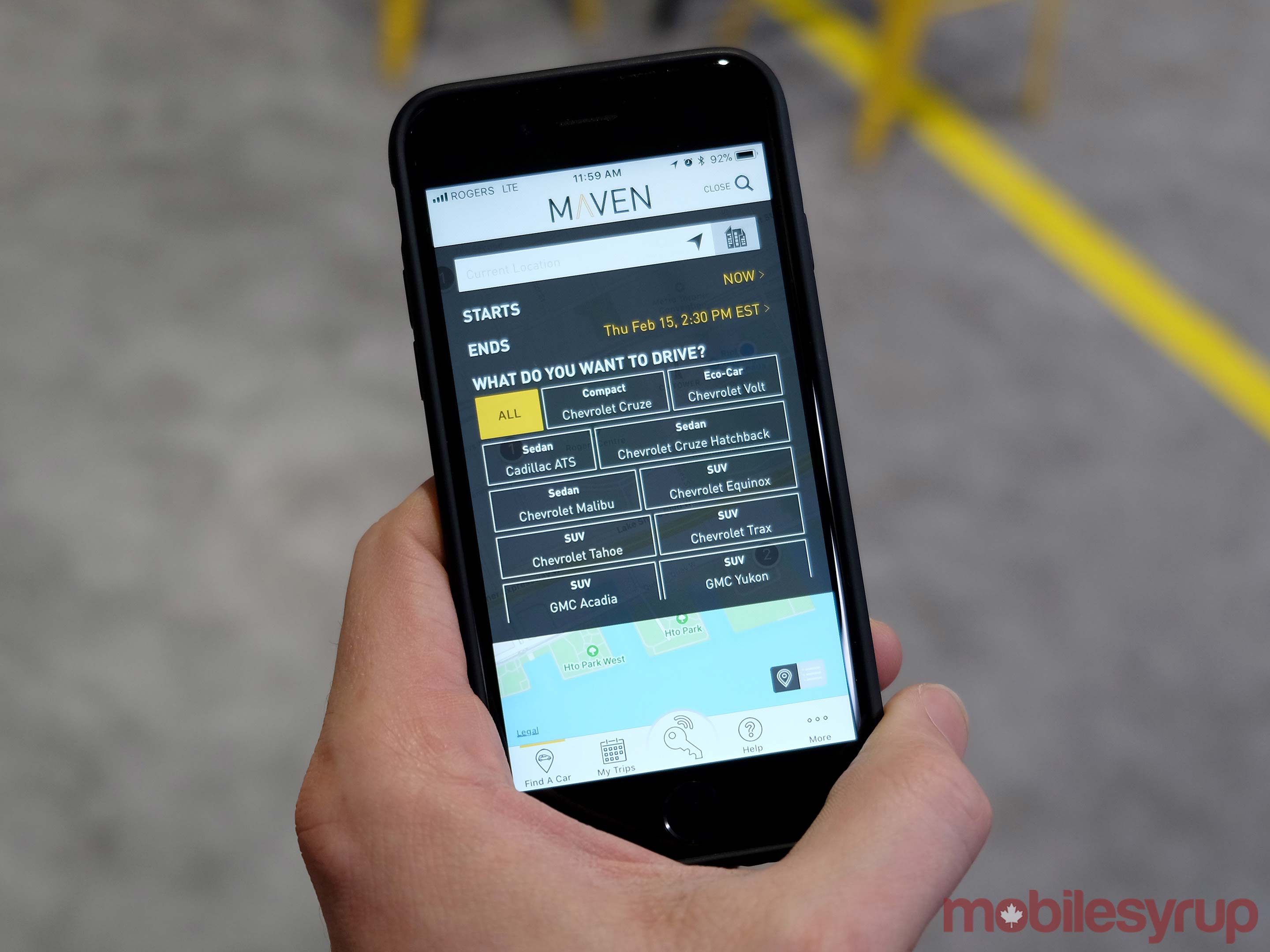 In the event that you want to rent a car through the app in one of the U.S. cities, you have to go through the process of signing up again. Steyn says the main reason is because the agreement terms are different, so legally, a single signup can’t transcend borders.

Apparently, that won’t require signing back up when using the service again in Canada, but is nonetheless an extra hurdle to go through to use what is otherwise the same service in another city south of the border. The same applies in reverse. If American members want to reserve Maven cars in Canada, they would have to also sign up again on the Canadian app.

I asked about workarounds with VPNs or simply downloading the U.S. app, and both Steyn and Latchford said it wouldn’t work because of redundancies blocking them.

They’re available at various designated locations, primarily located in Toronto’s downtown core. A handful of cars are also available in Kitchener-Waterloo. Booking can be done for immediate use, or in advance, even up to 90 days ahead. You’re on your own as far as getting to the actual vehicle, but once you arrive, you can unlock it and start it up using the app itself. There are no physical keys or fobs.

Gas and insurance are included, as is full OnStar service, SiriusXM satellite radio and unlimited LTE for the in-car Wi-Fi. You can stream gigabytes worth of content and never get charged for any usage, Latchford confirmed. All the vehicles can also run Apple CarPlay and Google’s Android Auto platforms. 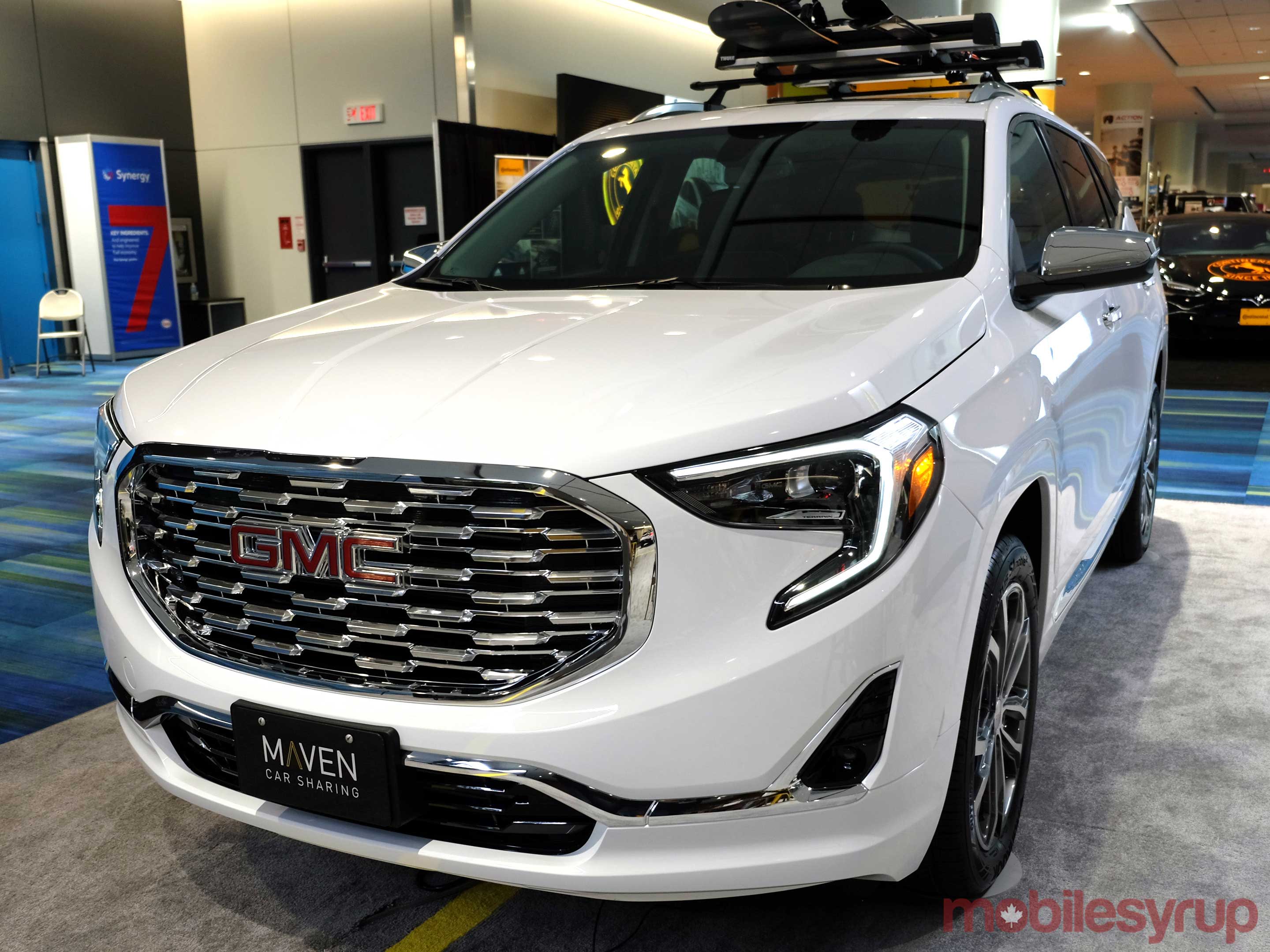 Unfortunately, none of the current vehicles in the fleet have screens in the backseats, so passengers would need to have their own devices.

The cars are taken care of by a team that will “thoroughly clean and detail them about five or six times per month.” Basic cleaning could be more common. If a member finds the previous driver made a real mess, Latchford says Maven staff will make arrangements to supply another vehicle left in reserve.

Particularly with the Chevy Volt, there are two currently in the lineup, yet two others are in reserve, allowing Maven to rotate them in case there’s not enough time to fully recharge the battery.

Every couple of days, staff also make sure to wipe any devices left behind in the Bluetooth menu. I would recommend you always remove your device yourself at the end for the sake of security, no matter what car you’re renting.

Maven limits mileage at 288 km per 24-hour period. Crossing the border into the U.S. is no problem, and the in-car Wi-Fi, OnStar and SiriusXM continue working like normal. So, then what happens for longer road trips?

Latchford says mileage rolls over, meaning that if you took the route from, say, Toronto to Montreal, which is about 544 km, (multiplied by two for the way back) you would have to stay there for a good four days to make the math line up. Edmonton to Banff is 413 km. Halifax to Quebec City is about 1,000 km. The longer the route, the less Maven makes sense unless you’re staying at your destination long enough.

This would be less of an issue for some other routes. Calgary and Edmonton are 300 km apart. Vancouver to Whistler is 128 km. Montreal to Quebec City is 255 km. Halifax to Moncton is 261 km. Vancouver to Seattle is 229km. Toronto to Buffalo is 159 km.

You get the idea. The thing about Maven for these types of trips is you need to factor in how long you’ll be gone, and how it lines up with the car-sharing app’s service mileage limits.

Since membership requires a credit card, Latchford says it would violate the terms to reserve a car on a friend’s behalf. If caught doing that, membership is revoked, and the credit card is flagged so you can never join up again using it.

The only way such a scenario would be copasetic is if the friend is also a member, and you happen to be in the car as a passenger as well.

Smoking is another no-no. A strong, lingering smoke odour in the car would be grounds for terminating membership, Latchford says.

At $9.00 per hour, Maven is starting out pretty competitively, though certain vehicles will be $14 per hour. Car2Go starts at $13 per hour, with no monthly fees or plans. Rentals can even be billed down to the minute.

Zipcar is at $9.25 per hour, though it does charge a $30 signup fee. There are also monthly plans to drop the price a little more. Mileage is more limited at 200 km per day, but the company’s footprint is significantly bigger for the time being. 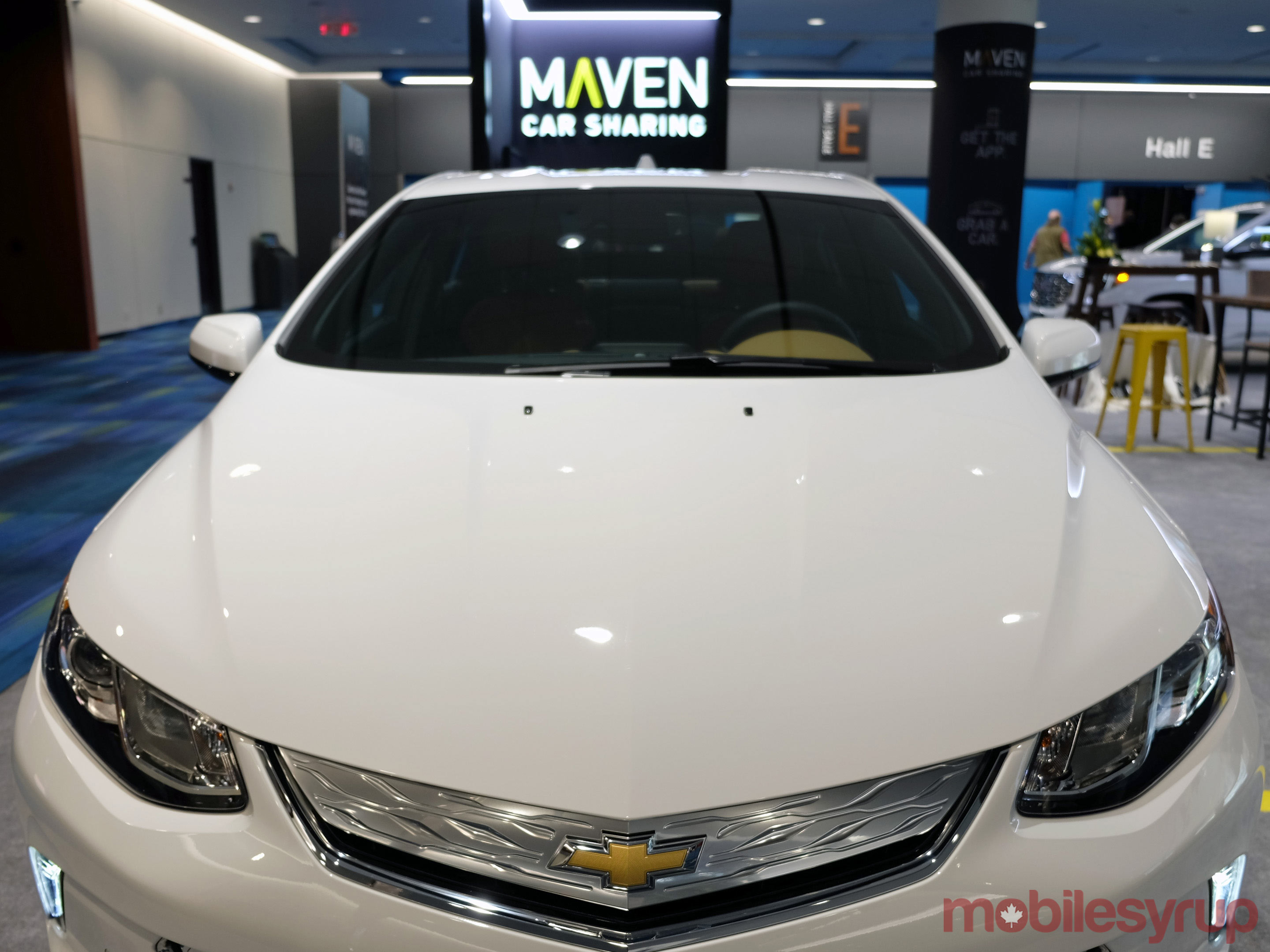 Where others have an advantage over Maven is in parking. Any Maven vehicle has to go back to the parking lot it came from. There is no option to drop it off at another Maven spot in a different lot. Even if or when Maven expands to other cities in the country, it appears unlikely that policy will change.

Gas and insurance are covered, with a card inside that allows for filling up on Maven’s dime.

Car-sharing isn’t new, but along with ride-sharing and autonomous driving, the future of car ownership looks to be dramatically different than it’s been since the Model T rolled out a century ago.

GM and Maven aren’t making any predictions, and it’s too early to be absolutely sure how it would turn out. Even so, on-demand access at the expense of full ownership has already changed music and video. It could be that owning a car won’t be worth it sometime in the future.