Apple Watch Series 3 Hands-on: Stepping out of the iPhone’s shadow 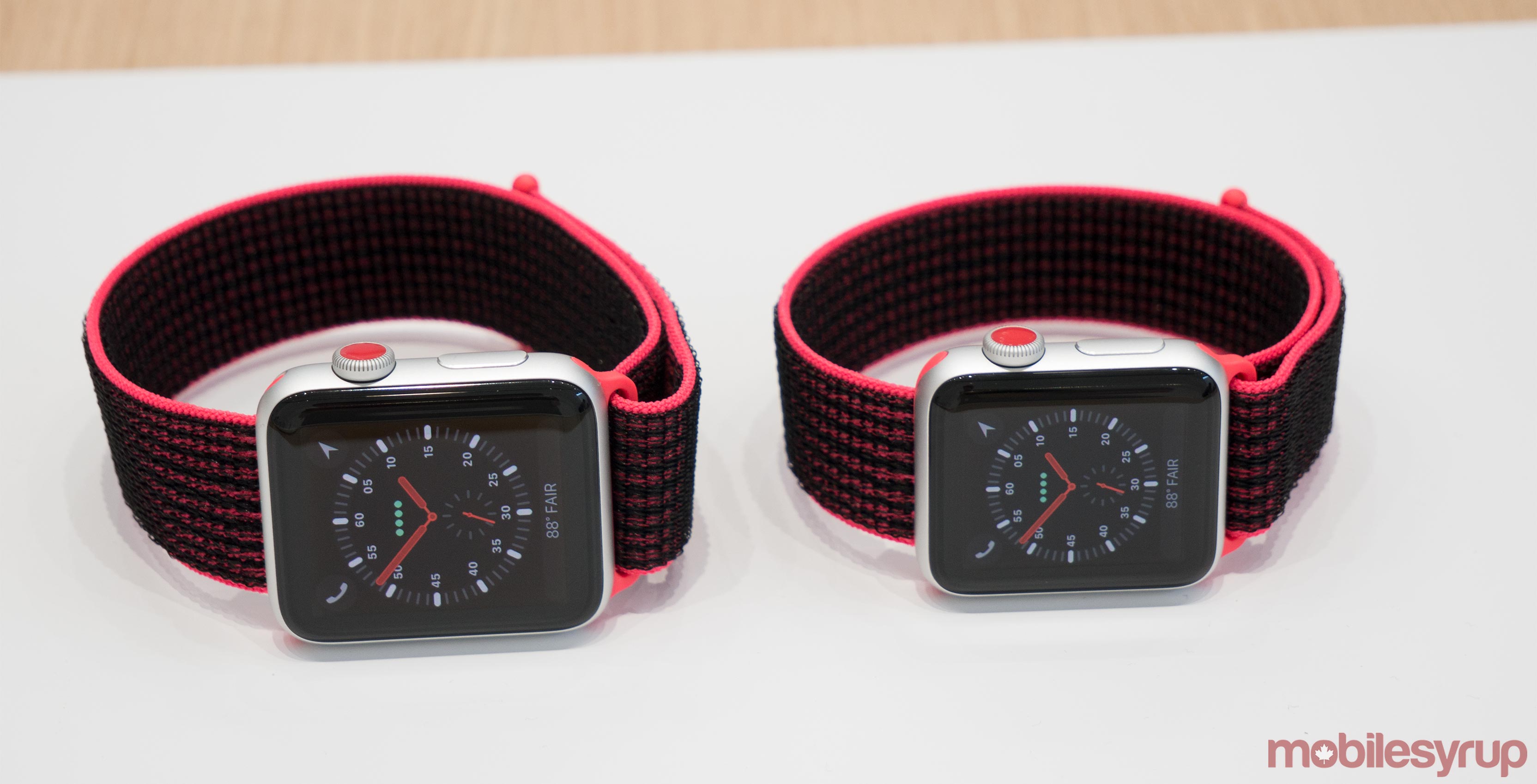 Apple’s third-generation Apple Watch looks almost exactly like its predecessor, so those hoping for a visual revamp will be disappointed in the tech giant’s latest wearable offering.

Under the hood though, the Apple Watch Series 3 is arguably the smartwatch users have been waiting for since the first Watch’s release roughly three years ago. 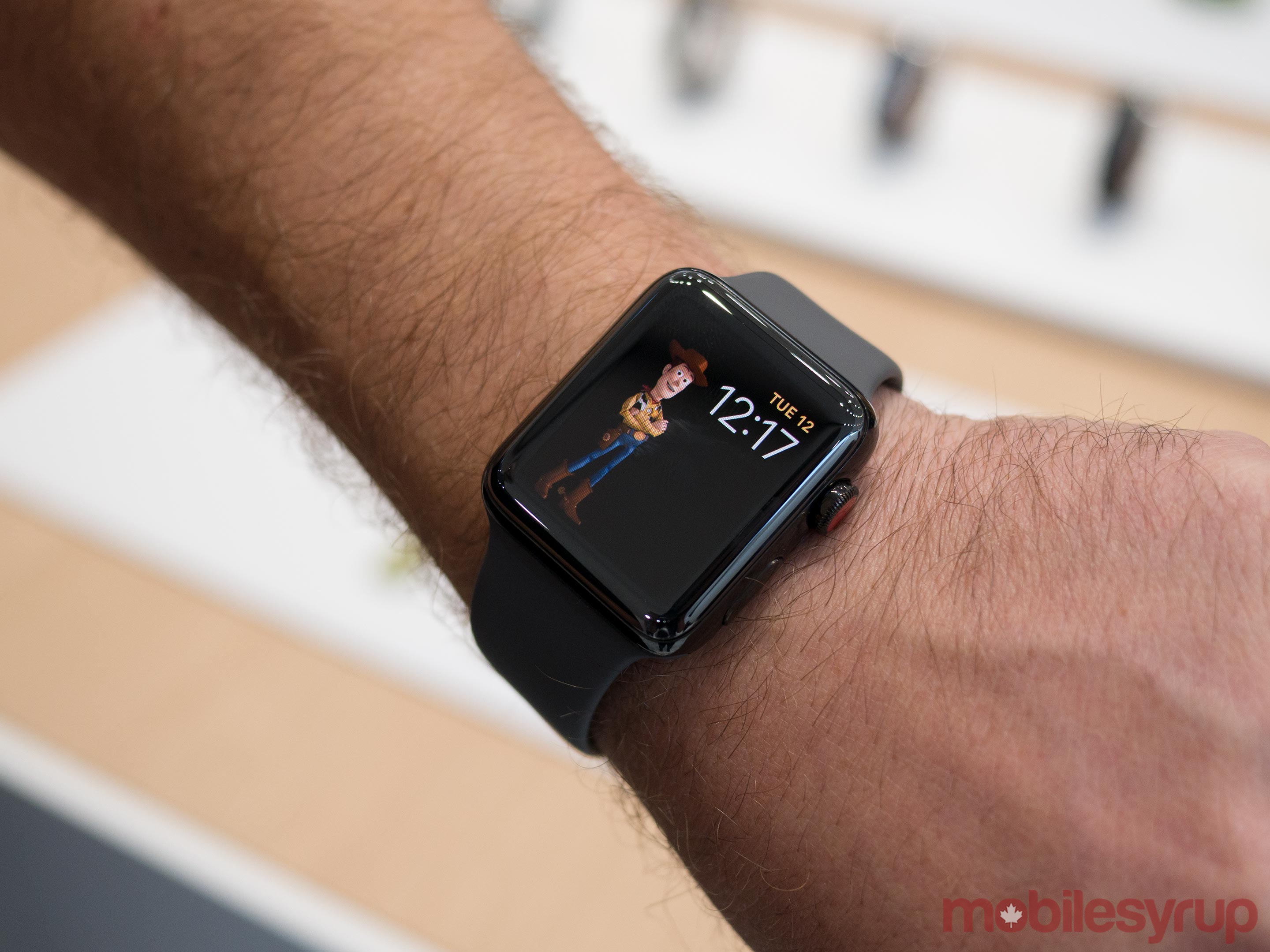 While I’ve always found value in the Apple Watch’s utility — I love using it for notification triage — some feel the main purpose of Apple’s wearable should be replacing the smartphone, rather than acting as a fitness-focused companion device.

The tech giant’s new LTE-enabled Series 3 Apple Watch is a direct answer to those complaints, and so far the device looks promising, though a number of questions still remain about the smartwatch, especially in the Canadian market. 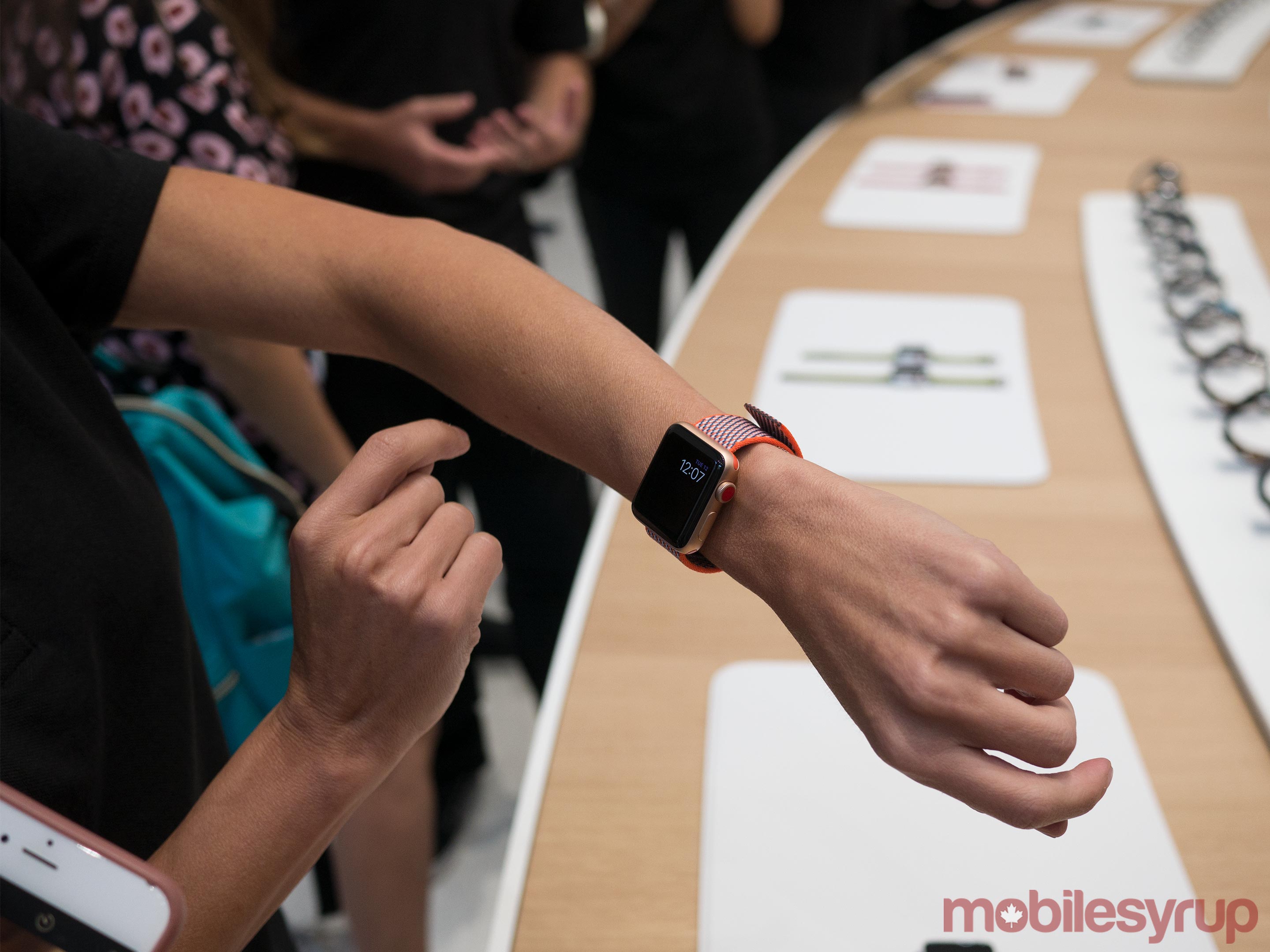 While Apple is also releasing a Series 3 Apple Watch without cellular connectivity, the big news surrounding the new wearable is the version that does include antennae. The physical differences between both models, as well as earlier Apple Watches, are minimal — it’s inside where things actually matter.

On the plus side, this means that older watch bands will still work with the series 3.

The only way to even tell the difference between the standard and the LTE version of the Apple Watch is a small red dot located on the watch’s digital crown. There’s been some negative response to that new aesthetic quirk, but I find it gives the wearable a dash of visual flare. 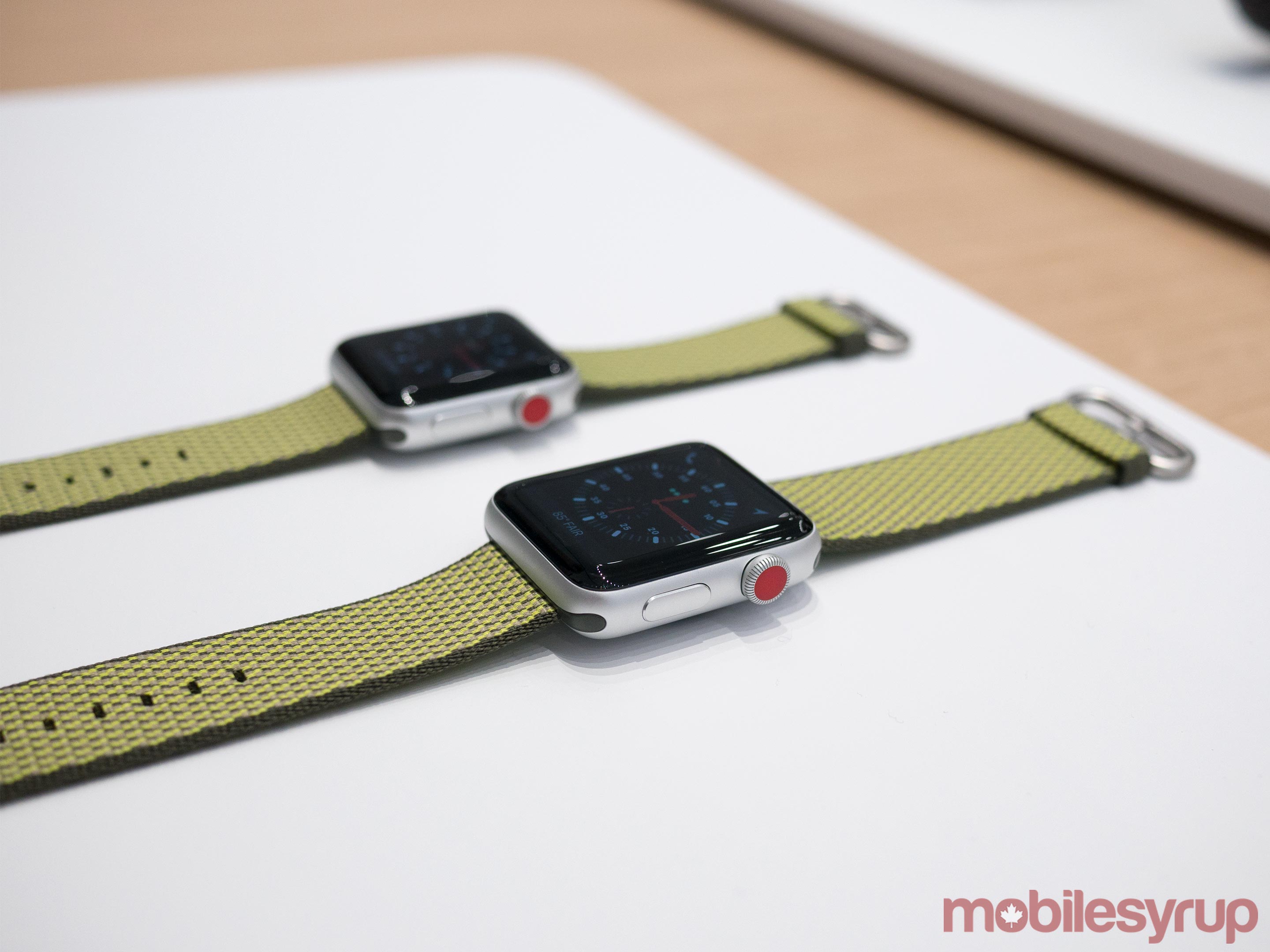 The Series 3, however, just like the Series 2, is slightly bigger than its predecessor, though the change only amounts to roughly two sheets of paper, according to Apple’s design team. This means that most people likely won’t even notice the difference between the two generations of devices.

The main change here, the one that has the potential to become a watershed moment for the tech industry, is the wearable’s built in LTE radio and embedded SIM. The fact that the watch’s screen works as an antenna, is also an impressive feat of engineering on Apple’s part. 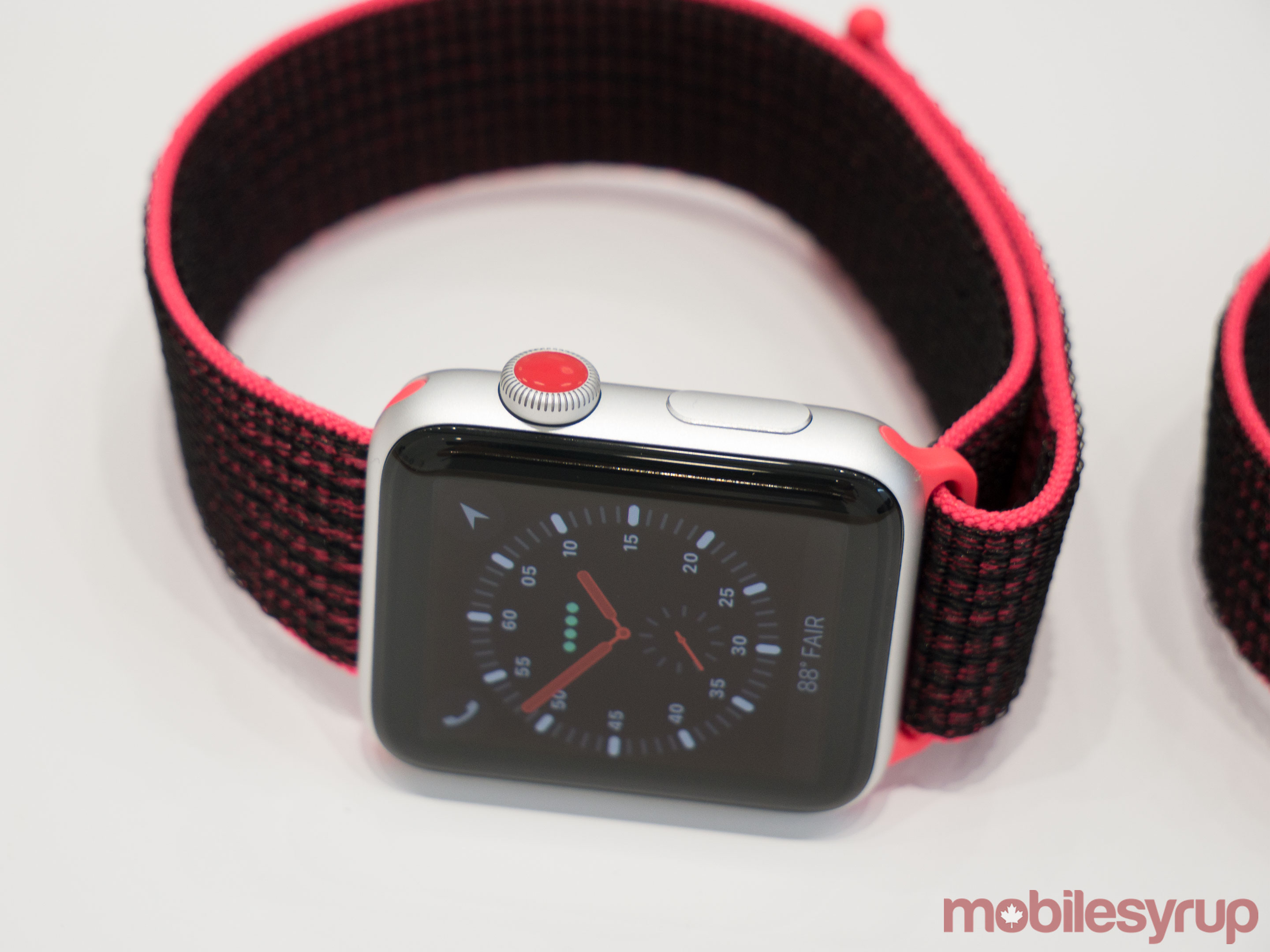 Unfortunately, it’s still unclear exactly how well the Series 3 Apple Watch operates in the cellular department since none of the watches I was able to test out were connected with a cellular network.

This means I wasn’t able to test making calls, sending texts or generally just untethering the smartwatch from the nearby iPhone. 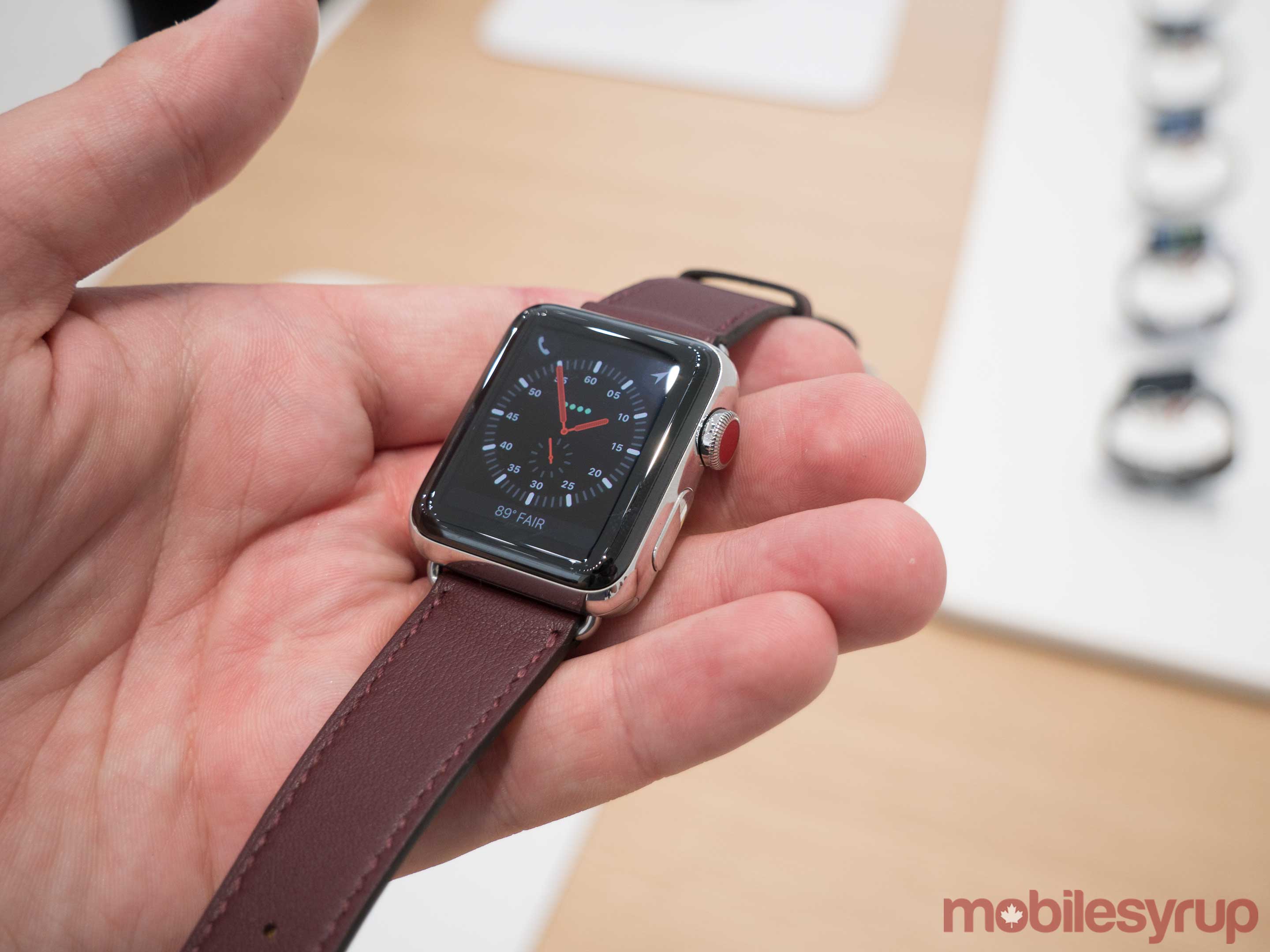 While I rarely opt to use apps with the Apple Watch, the noticeable performance bump in the third iteration of the device might convince me to finally do so. Even with the launch of watchOS 3 and the Series 3 Apple Watch, I always found it took too long for apps to launch for them to make sense in the context of using them on my wrist. More often than not, I’d just pull out my phone instead.

At least in the demo space Apple had setup for the wearable in the Steve Jobs’ Theatre, that was no longer an issue. Apps were snappy to launch and while the jump between the Series 1 and 2 was definitely more pronounced, the Series 3 seems to smooth out the 3’s overall user-interface. 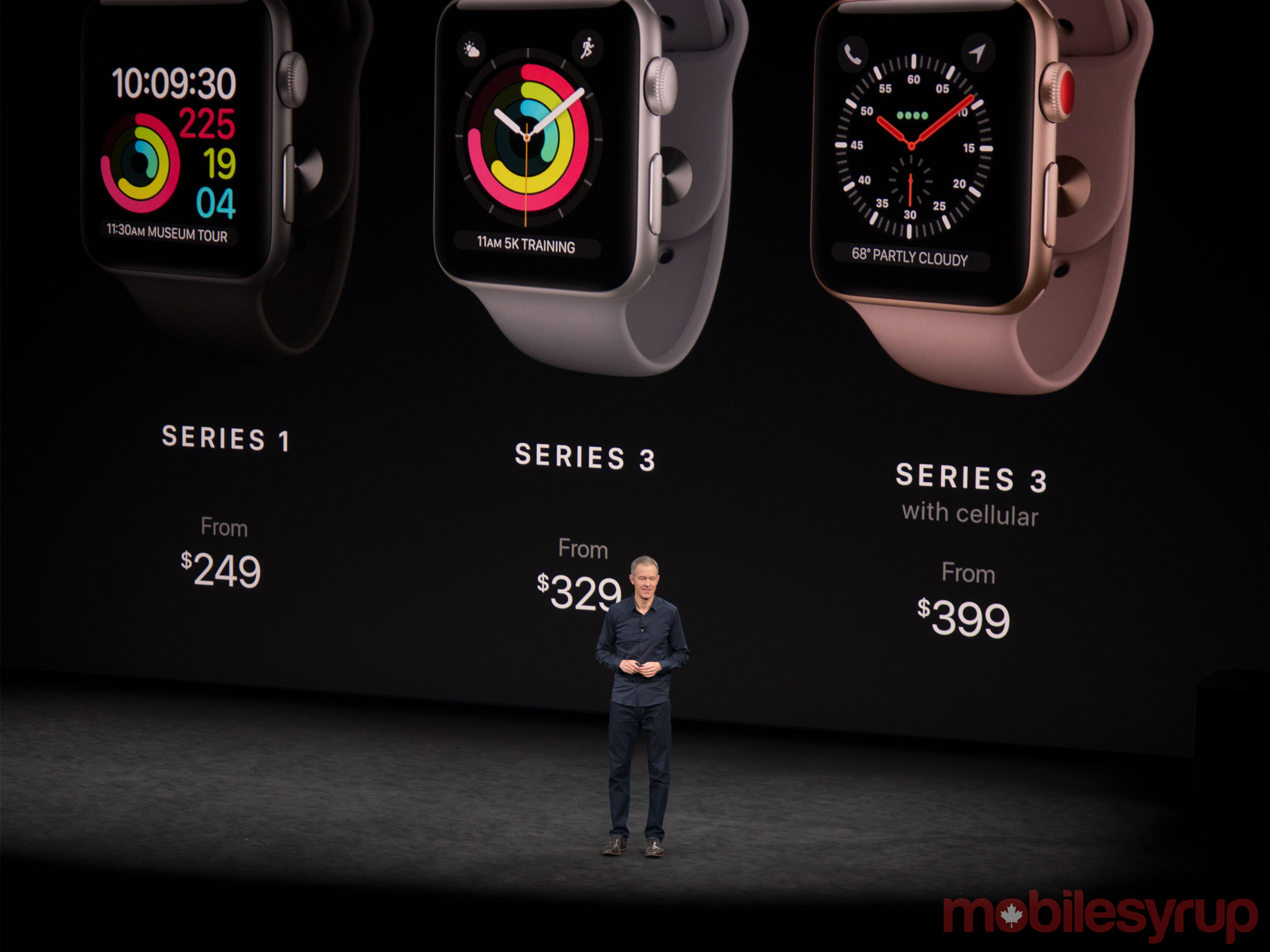 Unfortunately, I wasn’t able to test out some of the Series 3’s most discussed features. I couldn’t steam music directly from Apple Music’s catalogue or test out the watch’s new barometer. I also wasn’t able to hook Apple’s AirPods up to the wearable either.

Additionally, it’s still unclear exactly how the eSim activation process will work. Bell tells MobileSyrup that it has enabled remote provisioning support for eSim technology and will be the first to integrate self-activation into the existing Apple Watch pairing process. This presumably means that when a customer purchases the LTE-enabled device, they will select their carrier during the setup phase within the watch itself.

In the demo space, an Apple rep also explained to me that you need to be connected to an iPhone in order to move through the setup system — so in an extremely significant way, the Series 3 isn’t completely untethered from the iPhone.

What we do know is that the Apple Watch Series 3 LTE will first be compatible with Bell’s network and then eventually Telus. 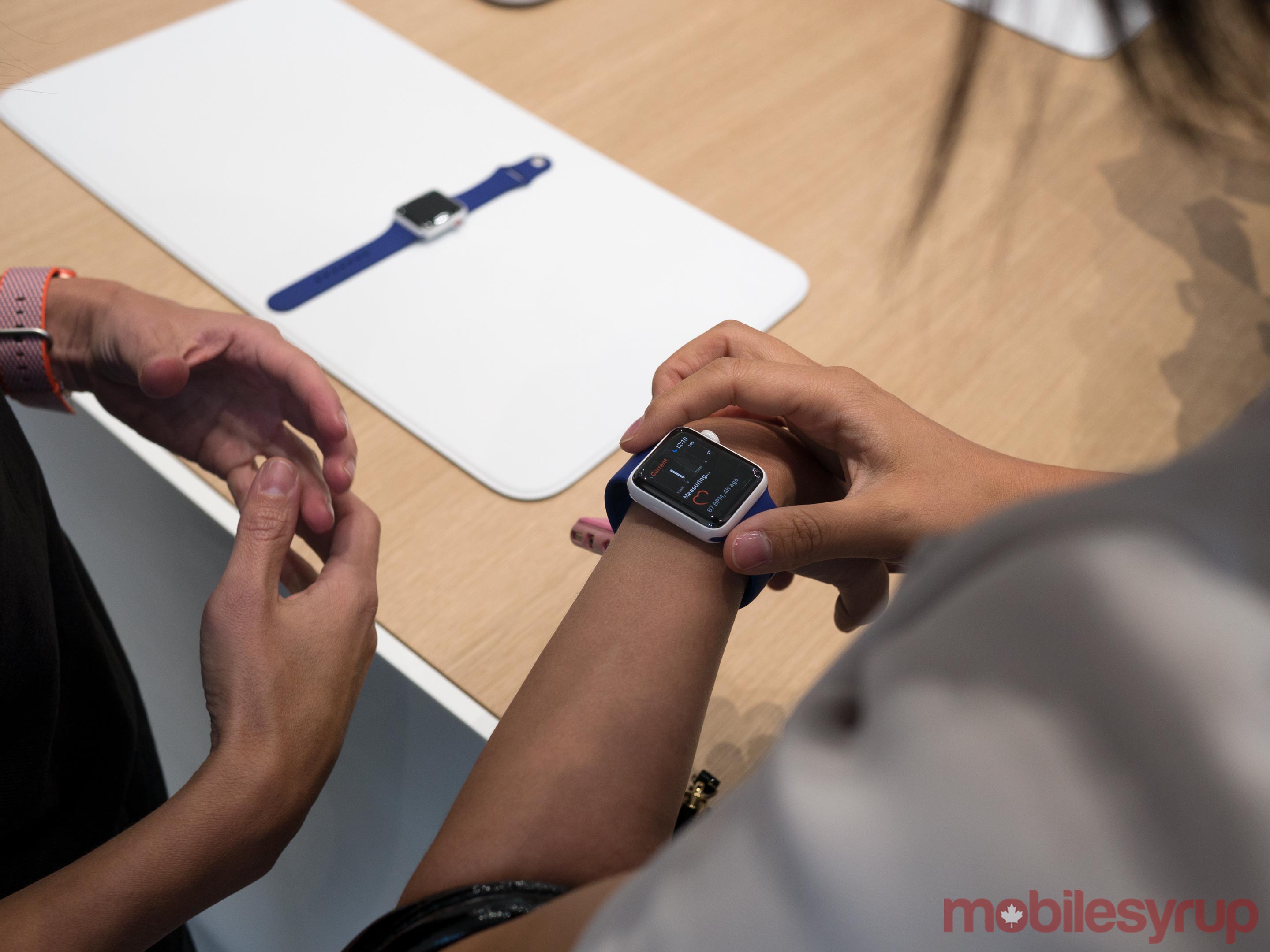 Telus sent MobileSyrup the following about the Apple Watch Series 3, explaining that the company “looks forward to launching the Apple Watch 3 as soon as the systems technology is in place; it’s part of our commitment to putting customers first,” and that it will launch the LTE-enabled Watch 3 through its network “later this year.” 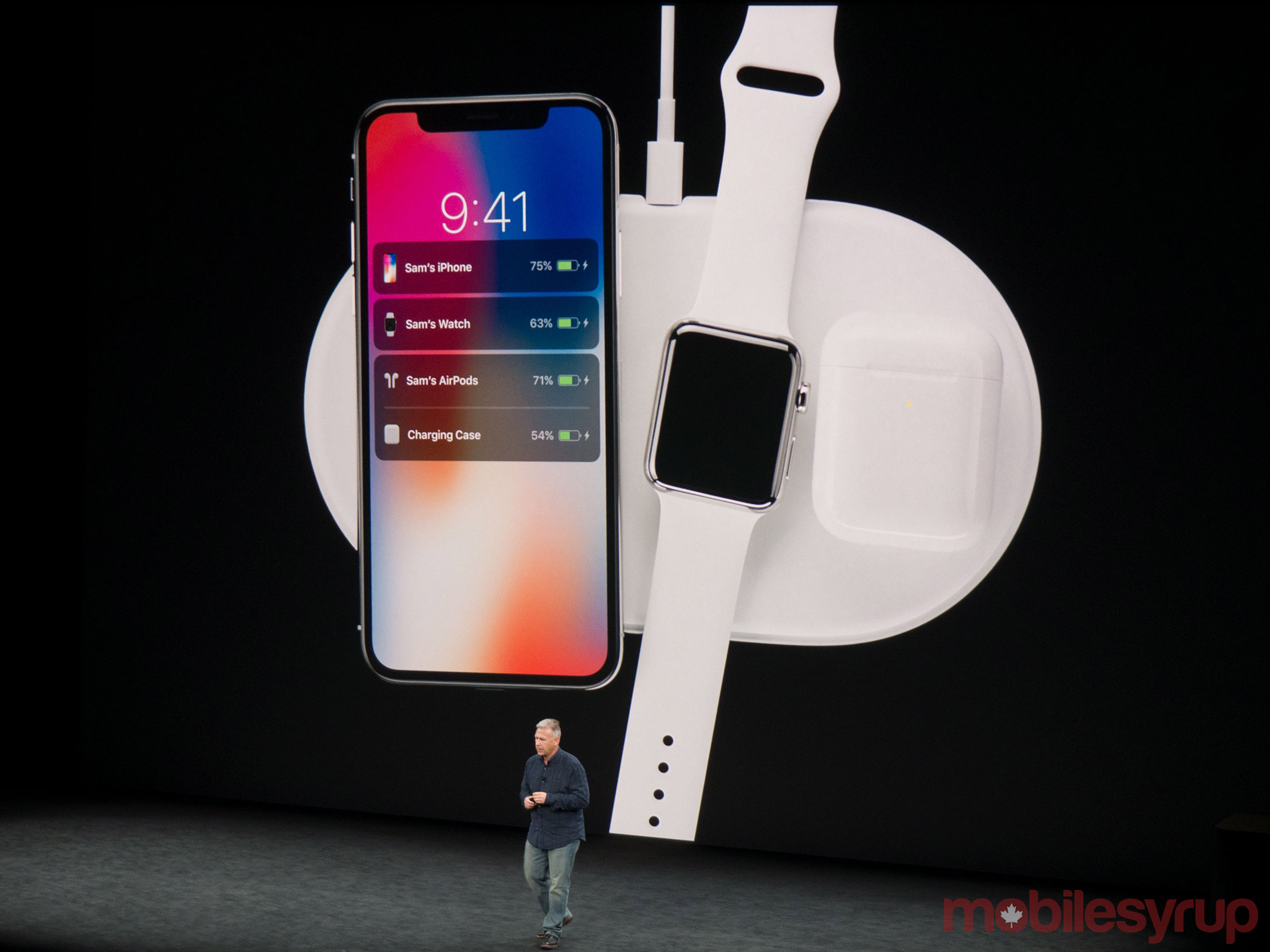 What we also know is that, in many ways, the Watch 3 will still be closely tethered with the iPhone. Customers will need an iPhone to set up the Series 3’s LTE connectivity.

Bell told us that adding LTE Apple Watch Series 3 functionality requires a $5 CAD monthly smartwatch plan add-on that allows users to share data and a phone number with their smartphone via a new feature the carrier is calling ‘NumberShare.’ The company also says that the first three months of the plan are set to be free for a limited period of time.

Finally, Bell says it expects the Apple Watch Series 3 to be available on their network on September 22nd.

With notes from Rose Behar.