Retro-bit is bringing the Game Boy back from the dead 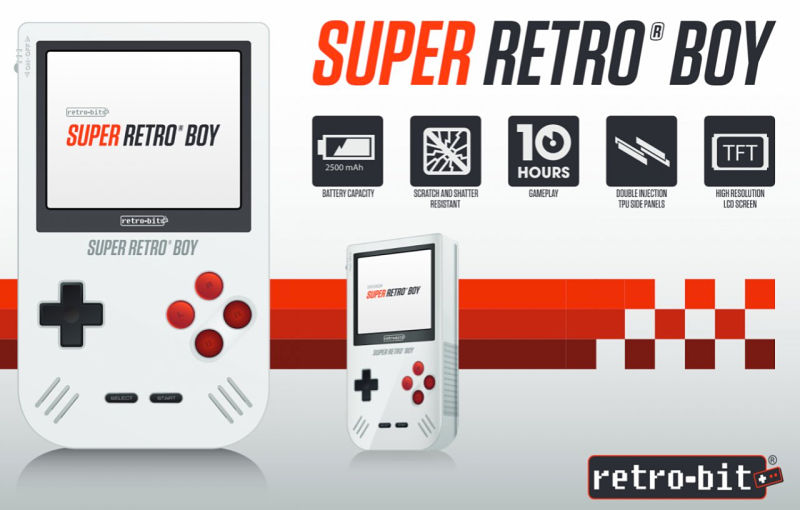 In fact, the Game Boy was the first video game system that was truly mine, and I begged my parents to buy me one for years in the early 90s. I even still have my classic, yellow Game Boy sitting at home in a drawer, though playing the system today is a painful experience due to its difficult to view monochrome screen that lacks a backlight.

Now, Retro-bit, a manufacturer that’s revived a variety of retro consoles with a fresh gloss of modern technology, has plans to bring Nintendo’s portable console back from the dead. The Super Retro Boy is a clone of the original Game Boy, complete with its highly-recognizable rectangular form factor.

This is where the similarities between both devices end, however. The Super Retro Boy is capable of playing Game Boy, Game Boy Colour and Game Boy Advanced cartridges. The handheld device also comes equipped with a 2,500mAh rechargeable battery that allows it to operate for 10 hours on a single charge, a shatter-resistant TFT HD display, and a surprisingly cheap $80 USD (about $105 CAD) price tag when it launches in North America in August 2017.

Since the Super Retro Boy also supports Gameboy Advance titles, Retro-bit needed to come up with a solution to accommodate that portable console’s additional shoulder buttons. While adding two additional face buttons isn’t an ideal solution, it’s likely the best option given how difficult it would be to reach shoulder buttons with the original Game Boy’s body (though, they could have put the buttons on the back).

I often think about picking up my old Game Boy, but as soon as I do, I put it right back down again because the screen is just too difficult to look at by today’s standards. The Super Retro Boy allows me to circumvent this issue by letting my play classics like Super Mario Land (which I still say is one of the best Mario game), Crash Dummies and the best Game Boy game ever released, The Legend of Zelda: Link’s Awakening, all with a backlit screen.

Given the popularity of Nintendo’s recently released NES Classic, it’s likely that this gaming blast from the past, despite not being developed by the Japanese gaming giant, is going to sell like crazy.

Nintendo’s Game Boy was originally released in 1989 in North America. Combined, the Game Boy and its successor, the Game Boy Colour, have sold 118 million units worldwide. Despite only featuring a monochrome display, the Game Boy destroyed its main competitor, Sega’s Game Gear, in the sales department, largely because of its more affordable price tag and impressive battery life.