Behind the wheel of Ford’s new self-driving car 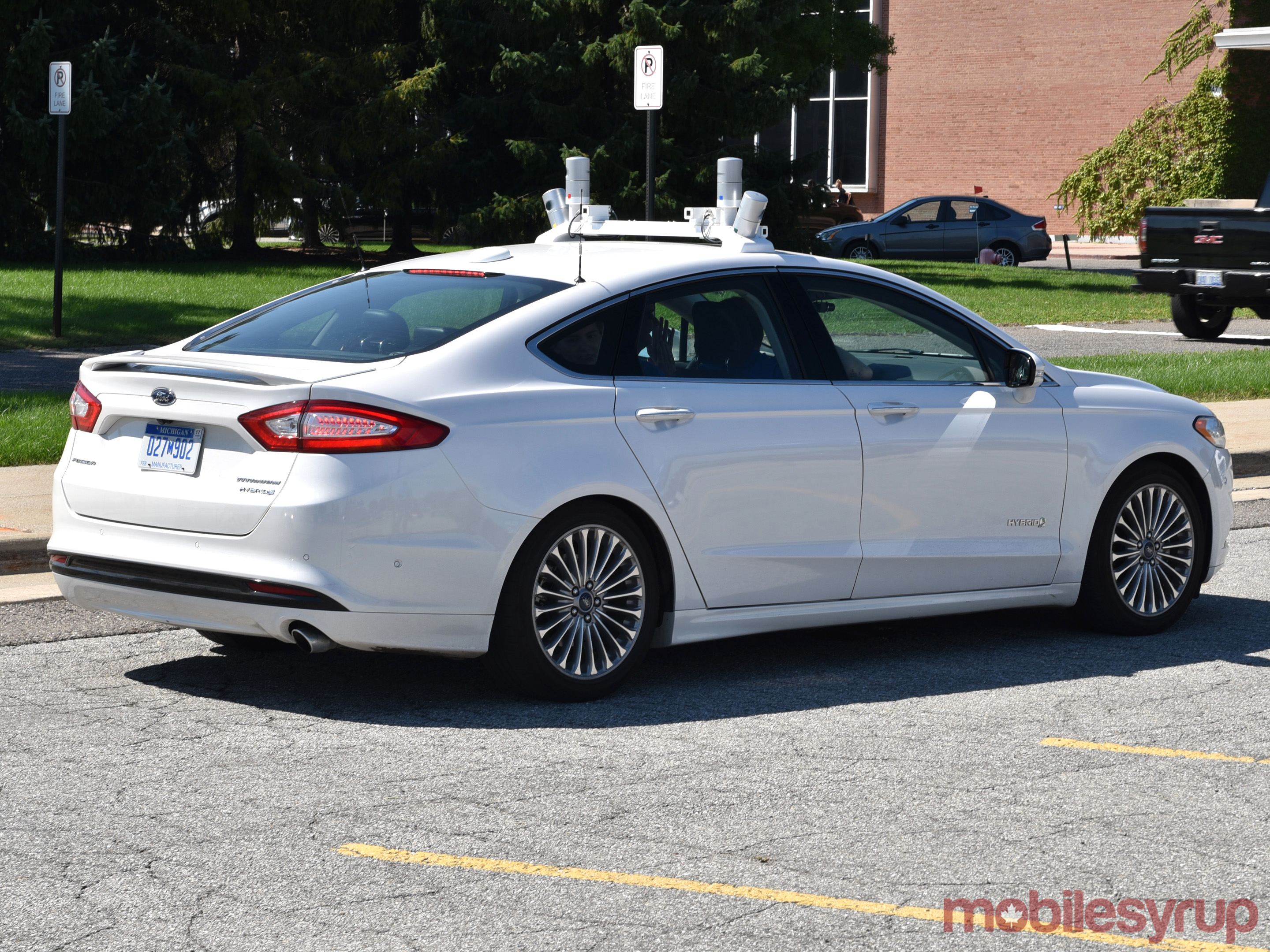 When it comes to self-driving cars, there really is nothing like actually being in one. A technology that seemed a little pie in the sky even five years ago is rolling closer to reality, and it feels unusual.

Speaking for myself anyway, the experience was like a crossroads, indicating how far the technology has come, and how much further it really needs to go. Ford demoed its autonomous Fusion vehicles at a press event at a test facility in Dearborn, Michigan, rolling them out onto real, albeit largely controlled, roads to showcase how smart they currently are.

The company’s road map will see a driverless shuttle service at its facilities by 2018, with commercial ride-hailing deployment by 2021. Four years after that, the cars would be ready for consumer purchase. At least that’s the plan. 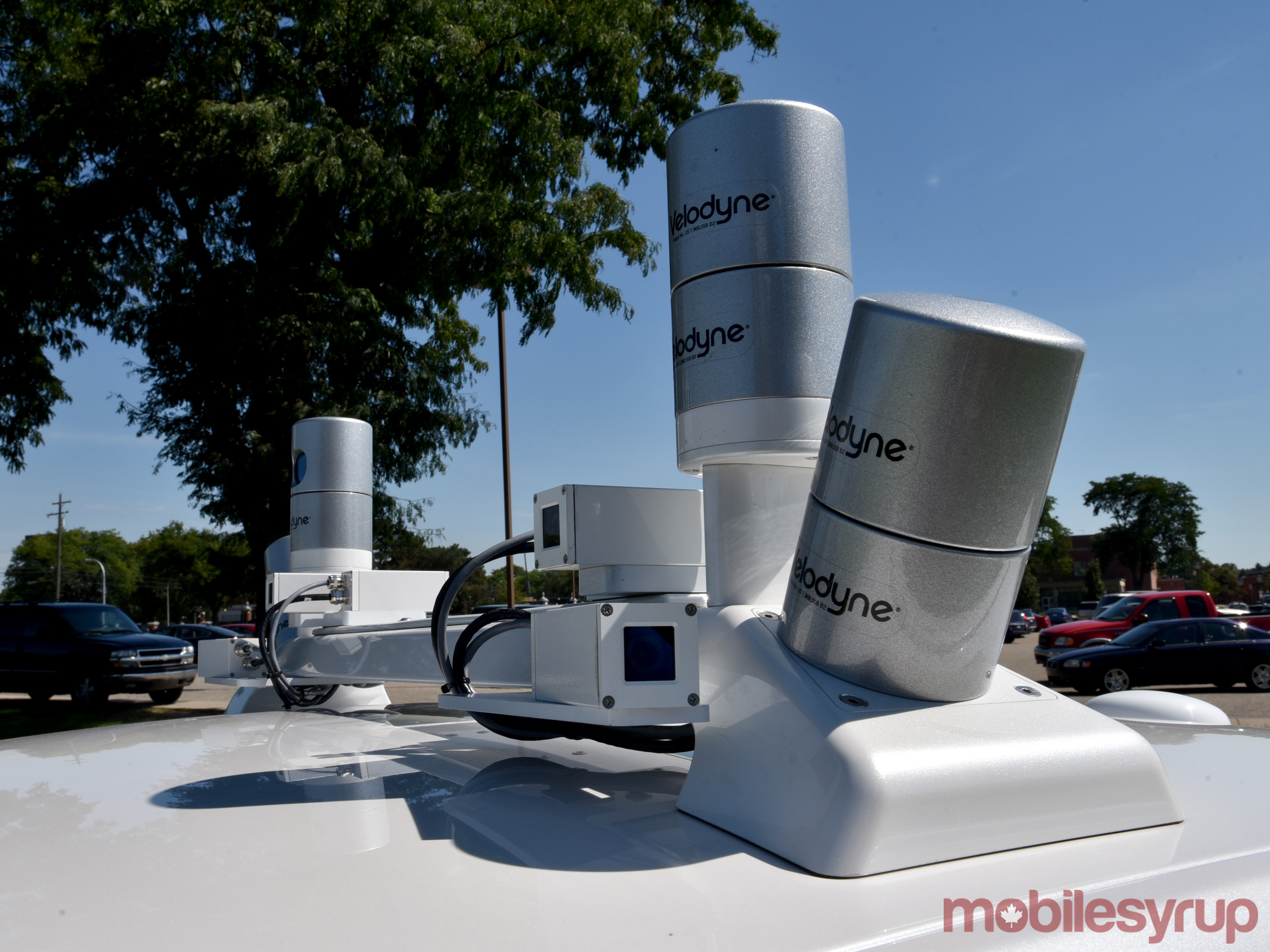 At the same time, Uber was showcasing its own self-driving pilot project in Pittsburgh in Fusion vehicles, though they will be constantly manned by professional drivers to take manual control when required.

From what I experienced in Dearborn, that is likely to be relatively often. Giving a car the ability to assess and compute its surroundings is both challenging and expensive, and so, deployment has to be limited. The driving itself also exercises an almost extreme level of caution.

For all the mapping that goes into this, GPS is one technology that isn’t used at all, and the reason for that is because signals can fluctuate or drop, particularly in denser urban areas with taller buildings.

Instead, the car uses three main sensing modalities — cameras, radar and lidar. Their respective presence is aimed at overlapping redundancies, where one (cameras) might work better in the daytime, the other (lidar) may work better in terrible weather. The top of the car holds most of the sensory equipment, whereas the trunk (which we didn’t get to see) has the computing equipment that processes everything.

A camera in the front windshield facing out from the rearview mirror is designed to recognize colours at traffic lights, while the top ones can help with blinking pedestrian lights and green arrows for left or right turns. Again, the combination works to remove much of the guesswork. For example, lidar recognizes that there is a crosswalk at that location, while the camera sees when the lights go on and someone is crossing.

Lidar is key because that is essentially what maps out an environment and calculates distance between key objects, like a stop sign or left turn lane. That means the vehicle would have to drive through every road to map out the environment around it, not unlike how Google uses its mapping vehicles for Street View.

When looking at a lidar map, the darker colors represent stored mapping data, while the car’s sensors generate real-time data that is shown as brighter colors. 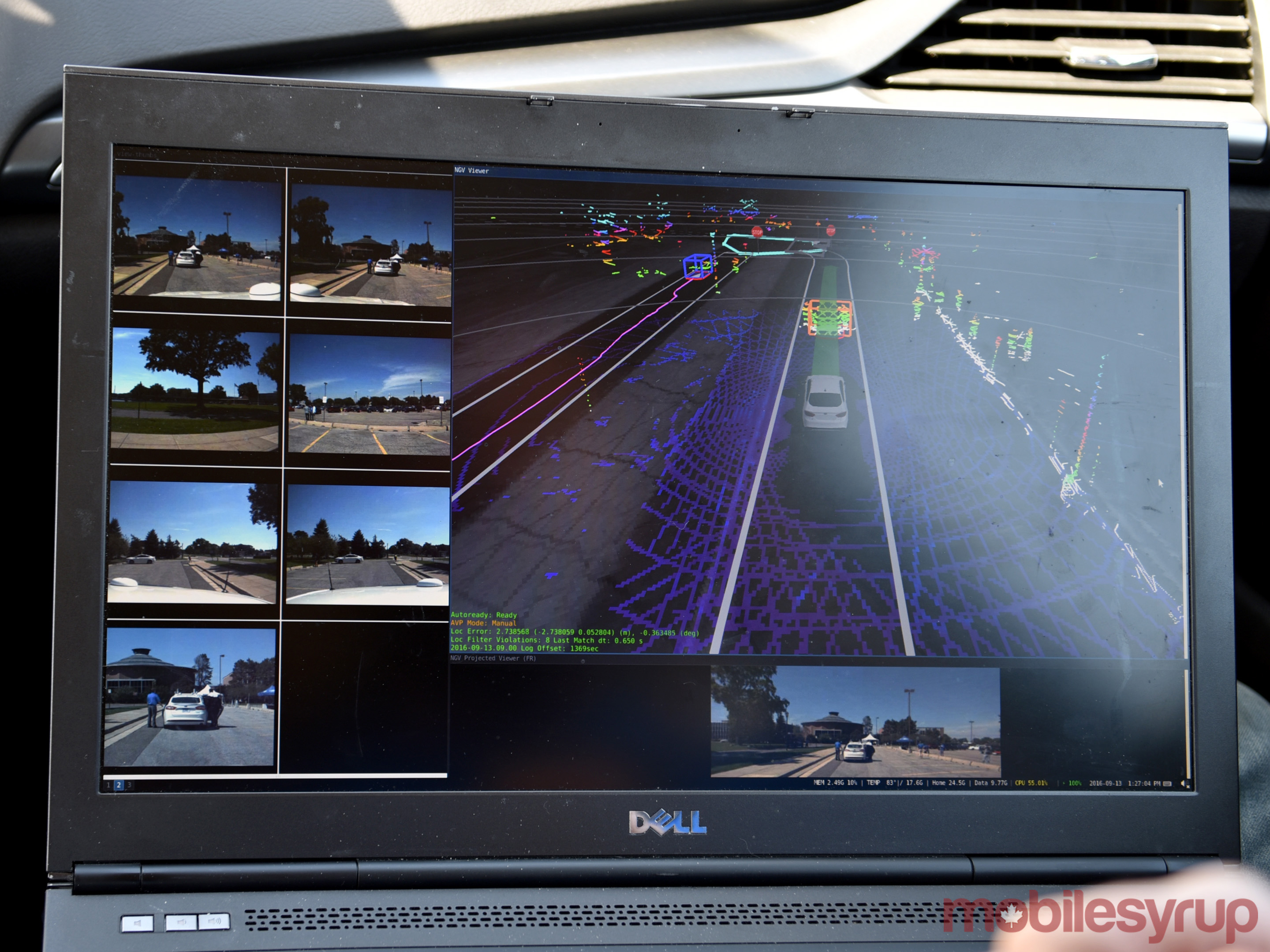 Unfortunately, Ford wouldn’t allow video recording inside the vehicle while it was moving, so we are not able to provide footage of the experience.

The 10-minute drive along a preset route in Dearborn that included main roads went smoothly, albeit with a few instances noting the current limitations of the technology. Within 30 seconds of driving off, an SUV in front suddenly veered right to park along a curb. Because the back bumper slightly protruded out, the self-driving Fusion seemed confused, assuming that it had a stopped vehicle ahead.

Then it wouldn’t move, even though there was plenty of room. The Ford rep in the driver’s seat had to manually override control and steer it just enough to clear the path. At all times, the Fusion was programmed to follow the speed limit, but never to move past it, even if the flow of traffic did so. Given we were on roads with minimal traffic, this wasn’t an issue.

A stop at a crosswalk went smoothly, with another Ford rep pressing the button to move to the other side of the street. The Fusion waited until he walked further in after crossing before driving off. A four-way stop also went smoothly, with the car heeding the right-of-way rules.

Soon after, two unplanned jaywalkers ran across the road. The car kept driving towards them, but stopped about 30 feet away, before moving on again after they were safely across. Lane changes were infrequent, and obstacles, like potholes and construction sites were non-existent, but Ford’s reps explained that road paint isn’t necessary for the car to know where to drive on the road, including in rainy or snowy conditions. Moreover, rerouted lanes due to construction would be recognized, diverting the car appropriately. 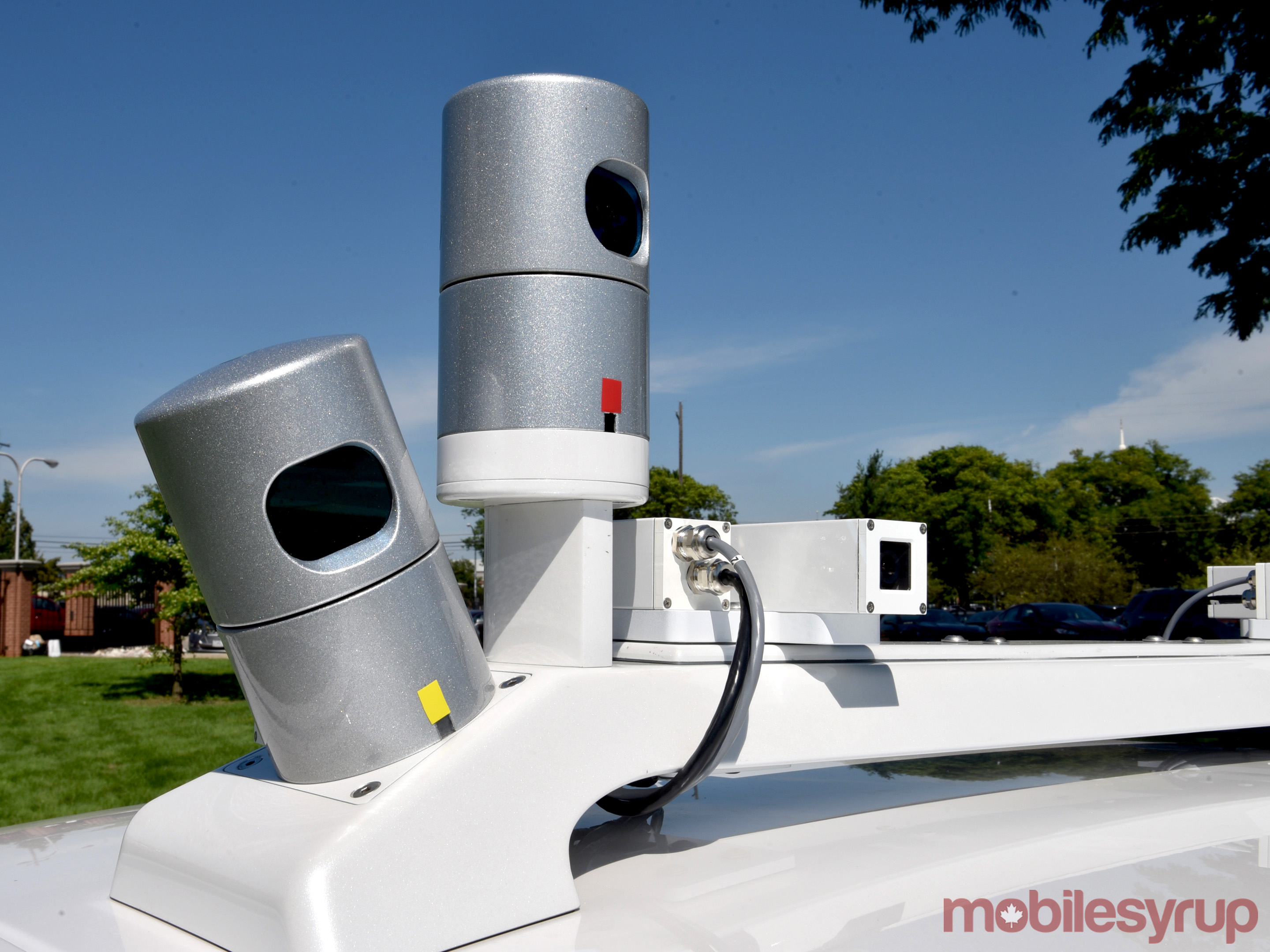 Despite the progress, some significant challenges lie ahead, and that raises questions over how much cooperation and synergy will be required within the auto industry, regulators and lawmakers over civil infrastructure.

For starters, the nuances of driving will be difficult to program, unless the vehicle has some sort of contextual learning. While still early, the fact the Fusion could be confused by a pedestrian simply standing at the corner is one of those variables that would seem easy to get around with better recognition. On the other hand, weaving through traffic or slamming the brakes when a child suddenly runs onto the street are just two instances of human decisiveness that will be interesting to see when implemented as artificial intelligence.

From an empirical point of view, civil infrastructure is key. The more a driverless vehicle knows about the area or municipality it’s driving in, the smarter it can be in navigating it all. Ford reps admitted that government support in that area could make development much easier, because then a vehicle could theoretically know how long a route may take based on the number of traffic lights and the time between green lights.

Taking the steering wheel — or a human’s ability to intervene — seems to a long way away, and the ethics and legalities underpinning that are certainly open for debate. Insurance liabilities are yet another layer. Cyber security is another factor that will require serious scrutiny to avoid hijacked vehicles, especially those in the transport sector.

Despite all that, the road map is within sight, given Ford’s projections. Whether the company plans to roll out a ride-hailing or ride-sharing fleet service to rival Uber, Lyft and others remains to be seen.

Until then, control of our vehicles remain in our hands.