Minus one CG bear, there’s not a lot notable about the technology that was used to film The Revenant. Between its choice of genre, and the fact that it was filmed exclusively on location using natural light, The Revenant is, in a lot of ways, a return to how movies used to be made. However, now that filming is complete, the movie’s distributor, 20th Century Fox, is turning to wearable tech to bolster how it markets the movie.

In the days and weeks following The Revenant‘s release, the studio tapped Lightwave, a company that specializes in analyzing biometric data for corporate clients, to track how audience reacted to the movie. The firm used an unspecified wearable, capable of tracking heart rate, skin moisture and movement, to chart the emotional response people had to the film’s final cut. Lightwave then assembled and graphed all of the data it collected in the handy infographic you see below. 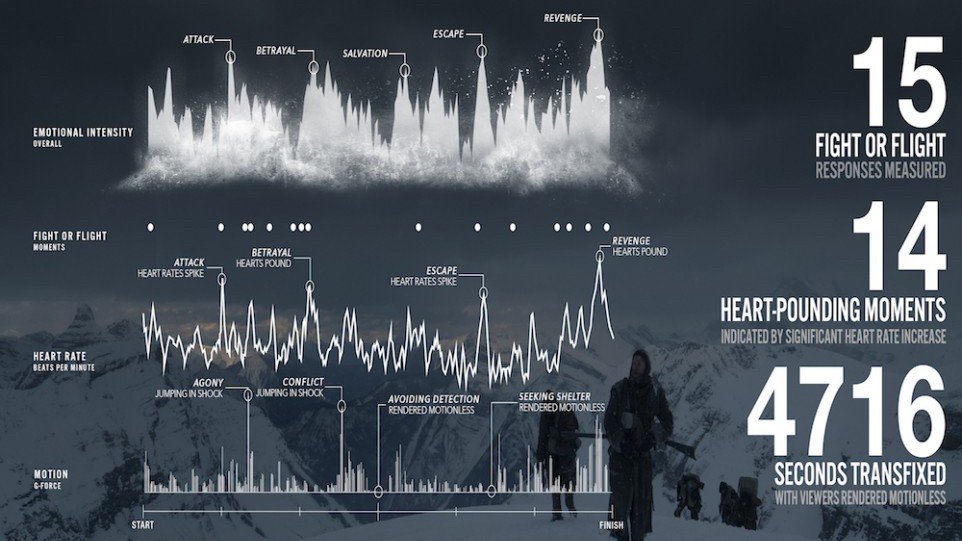 All things considered, Lightwave’s data isn’t too surprising. Like any piece of fiction, Alejandro G. Iñárritu’s latest has its share of intended emotional valleys and peaks built into its overall narrative. The director, know for gems like Birdman and Babel, likely built specific scenes — in this case, the attack, betrayal, salvation, escape and revenge mentioned in the graph — to elicit a response from viewers, and, for the most part, audiences reacted to those moments as intended.

As mentioned, Fox plans to use the data to better target its marketing efforts. Iñárritu has apparently seen the data as well, though it’s not clear what he thought of it.

It should be noted this is the not the first time Lightwave has lent its tech to company looking to gauge how people react to a certain product or piece of entertainment, though with wearables becoming more commonplace, it’s likely we’ll see a lot more of these type of market studies done in the future.