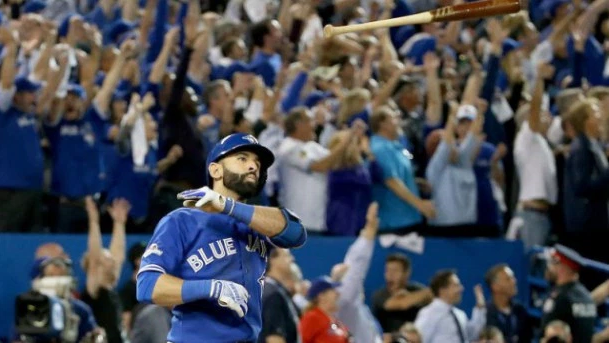 Jose Bautista’s home run — and now-famous bat flip — in the seventh inning of yesterday’s momentous ALDS Game 5 lifted the Toronto Blue Jays to universal acclaim. What is dubbed as being an “instant classic,” Rogers is reporting record-setting viewership during the game, as well as the entire series between the Blue Jays and the now-defeated Texas Rangers (#sorrynotsorry).

Rogers-owned Sportsnet recorded its largest audience in network history, with an average audience of 4.85 million viewers tuning into the broadcast. Rogers noted that “Overall, 11.5 million Canadians watched some part of the game on Sportsnet,” peaking at 8.1 million concurrent viewers at 7:44pm EST, when Roberto Osuna struck out Will Venable.

TV is how most people watched the series, with over 16 million Canadians seeing some part of the ALDS’s five games, representing approximately 46 percent of the Canadian population.

From a mobile perspective, Rogers noted in a release to MobileSyrup that an average of 20,000 people at each of the three ALDS games at the Rogers Centre connected to its wireless network. In addition, Rogers noted that “over 17,000 people connected to the Rogers Centre free in-seat WiFi network, an impressive number considering the capacity of a Jays game is 49,282.

In addition, “229 percent more content was shared over Rogers Centre Wi-Fi network during last night’s ALDS Game 5 at Rogers Centre compared to the average during the regular season,” said the statement.