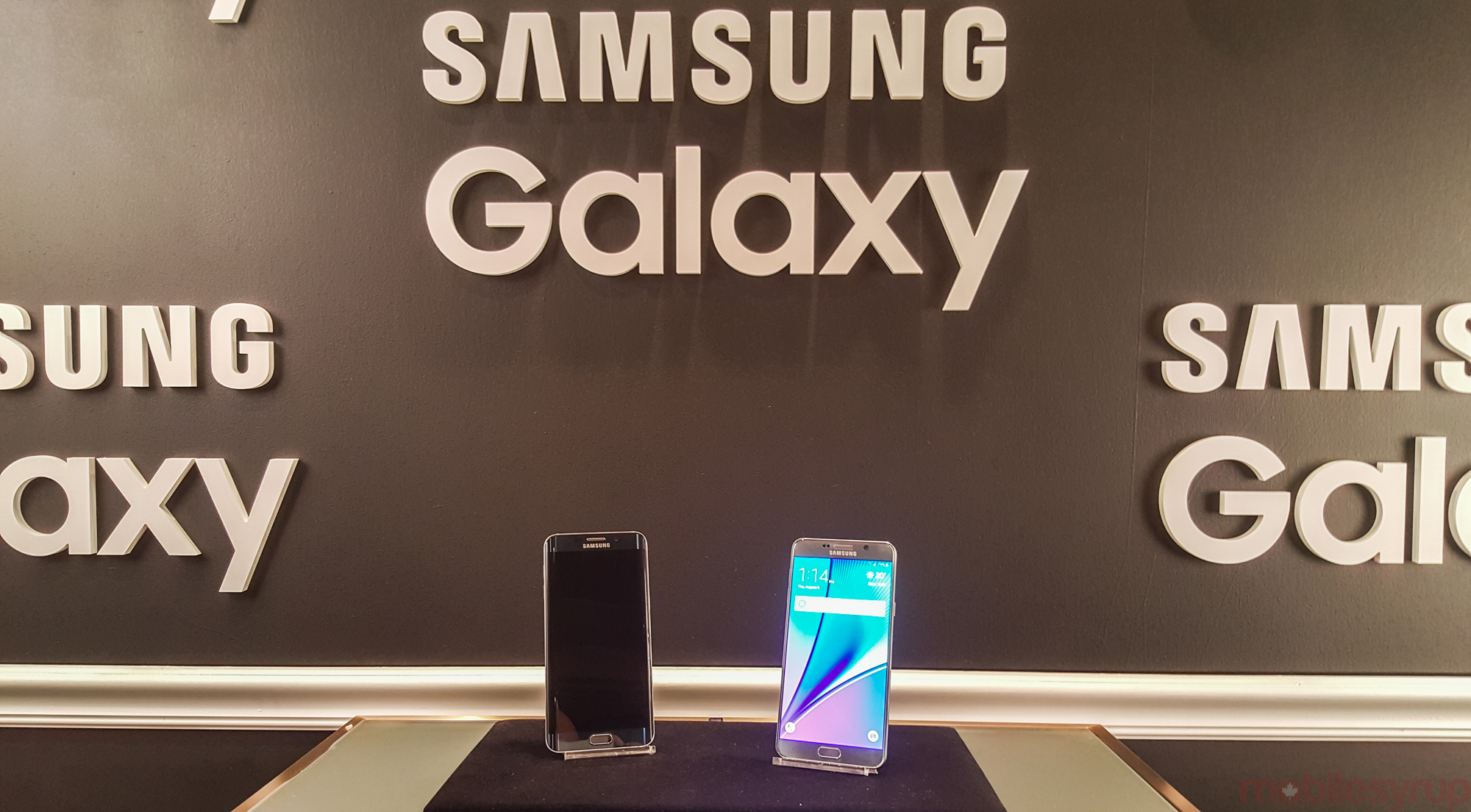 After five years, Samsung has finally figured out what the Note needs to be: a blank canvas, as accessible and intuitive as the pen and paper it is inspired by. This year, the company has done exactly that, whittling away every bit of excess flesh from the product, leaving only metal, glass, and potential.

Of course, this being a Note device, it is also large, but the Galaxy Note 5 no longer stands on its own in that category. In fact, this year’s version is slighter than the third and fourth generation models, eschewing the removable back cover and enclosing the 3,000mAh battery in a frame of metal and glass. 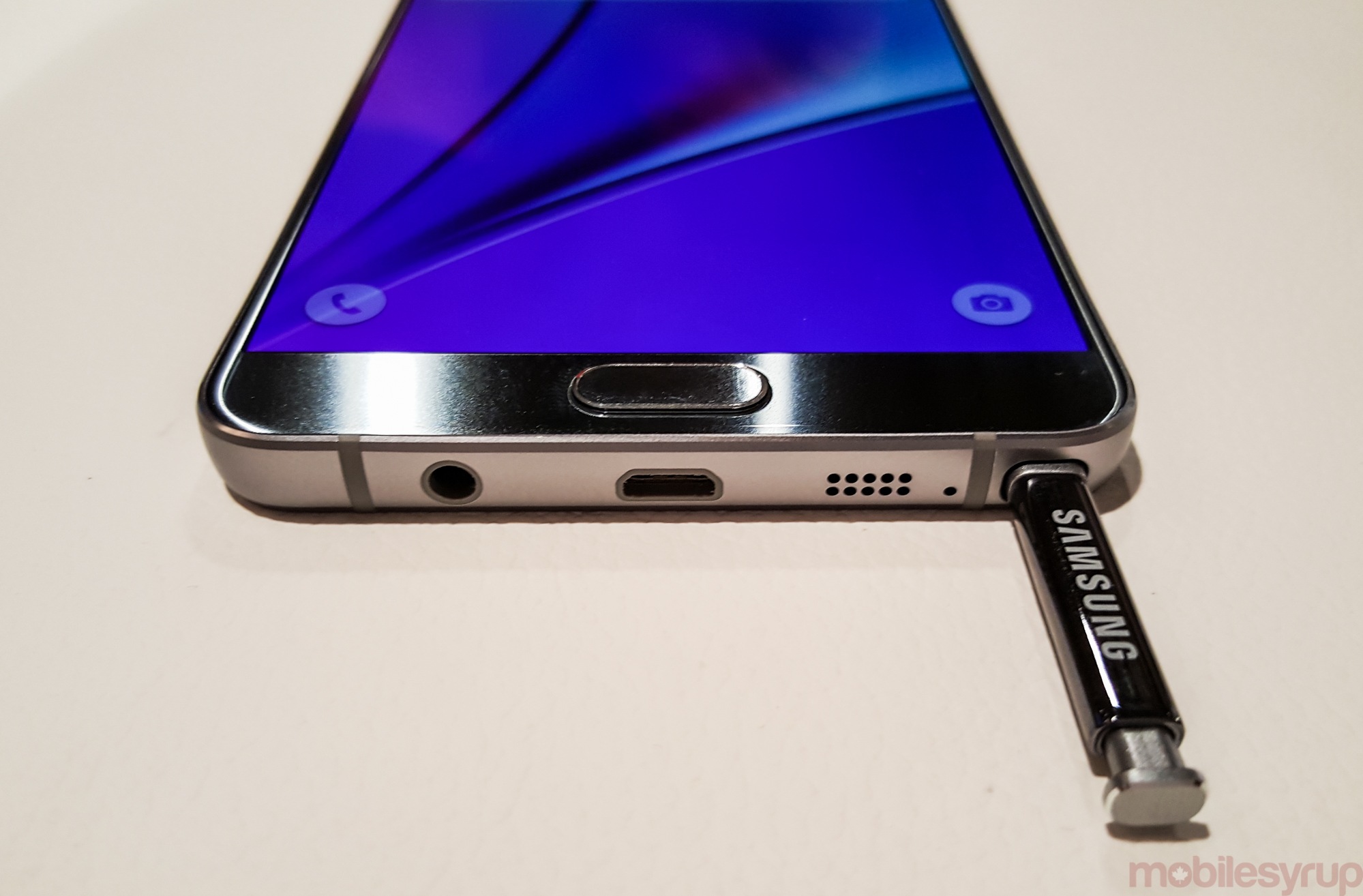 Available in black, white and gold variants (with others to launch by varying region), the Note 5 resembles the Galaxy S6 more than it does the Note 4. Retaining the aluminum frame of its forebear, the Note 5’s closed back cover slopes in towards the narrow metal bezel, giving it the appearance of a reverse curved display.

But unlike the Galaxy S6 edge+, also announced today, the 5.7-inch QHD Super AMOLED display is flat, optimized for the refreshed S Pen that pops out of its lower right holster with a push-in trigger. 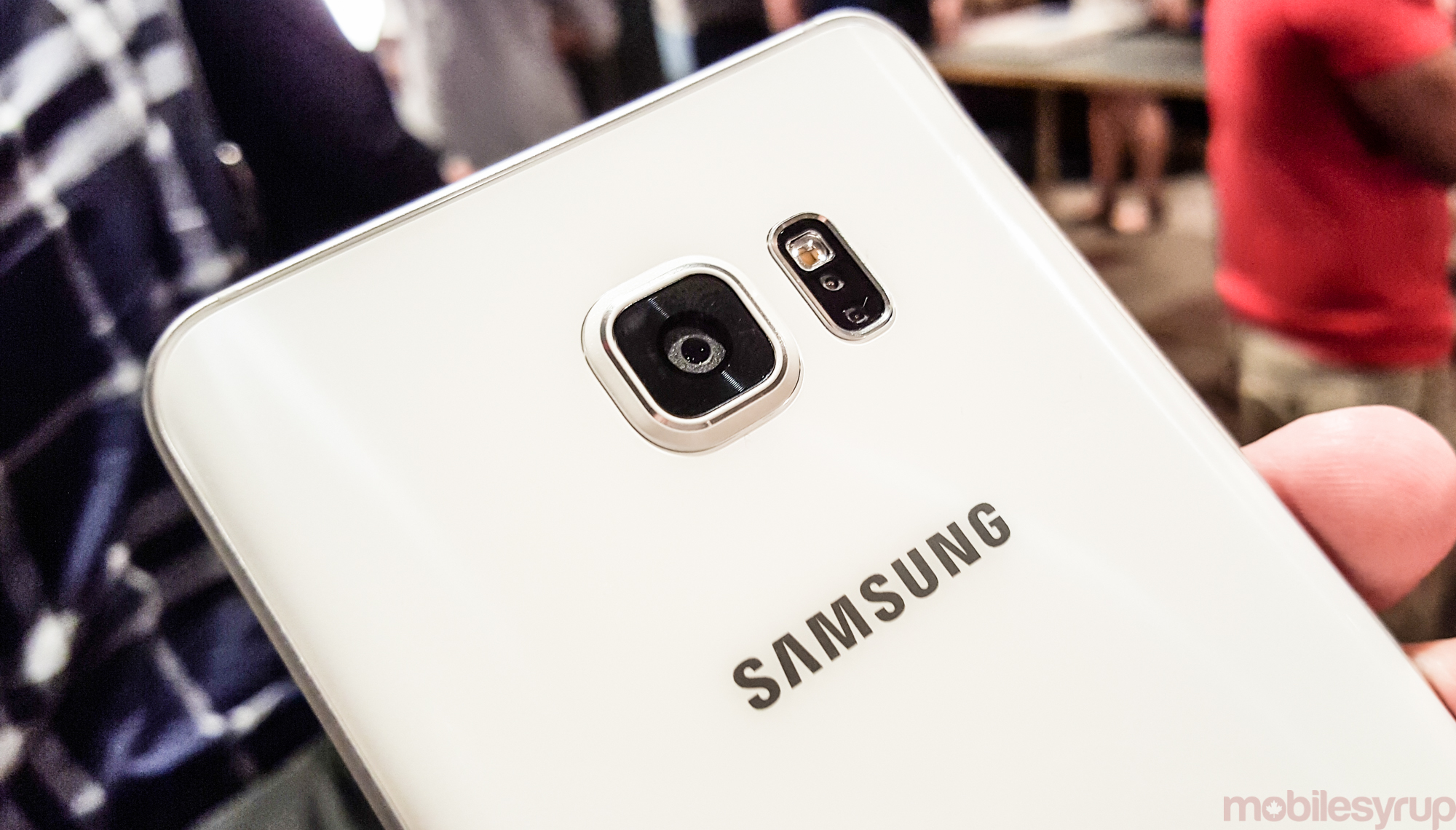 This year’s Note also gets a spec boost: internally, it is rocking Samsung’s latest homegrown chip, the same Exynos 7420 SoC that has proven so capable in the Galaxy S6. With a larger screen but an identical resolution, we’re expecting performance to be on par, if a little better, depending on whether Samsung decided to clock the cores slightly higher.

The company has added plenty of breathing room with 4GB of RAM, but this year’s model is only available in 32GB or 64GB models, with no microSD slot. It’s unclear why Samsung is only going with two SKUs, but it hopes that by simplifying its lineup, customers will better understand their value. 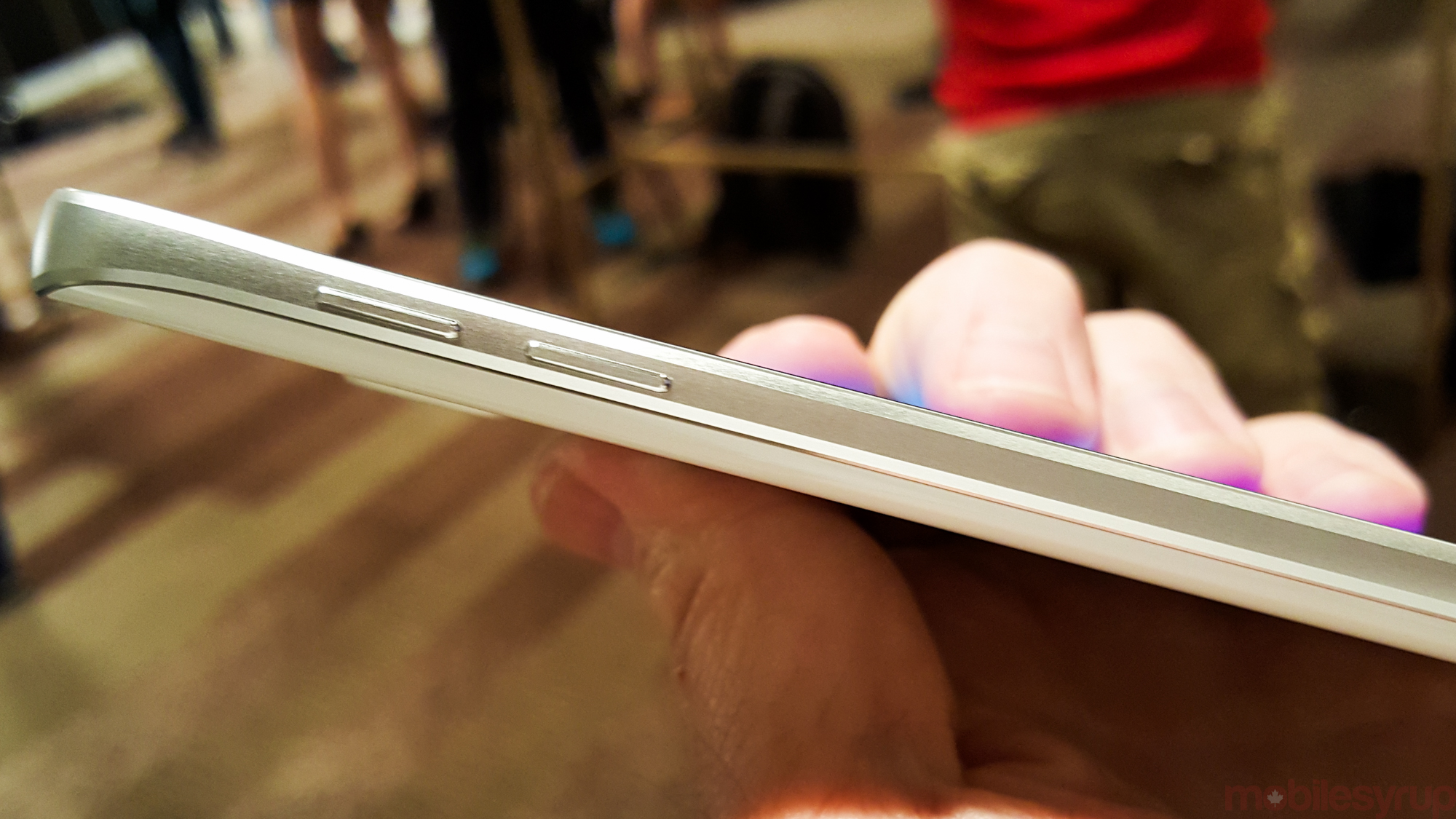 The 3,000mAh battery is slightly smaller than last year’s Note, a trend Samsung is happy to indulge. On the flip side, like the Galaxy S6, the Note 5 comes with built-in Qi and PMA wireless charging and Fast Charging, which has actually increased in speed over its predecessor, filling the device (with a compatible charger) in two hours. On the wired charging side, the company promises nearly a half charge in just over 30 minutes and a full battery in 90 minutes, one of the fastest times in the industry (matched only by the new Moto X Style).

The company has also embraced continuity in the camera, giving the Note 5 the same 16MP rear sensor and F1.9 lens combo as all three Galaxy S6 devices. Optical image stabilization is present, too, but Note 4 upgraders will find more steady 4K video footage this year, along with a better 5MP wide-angle front-facing shooter. 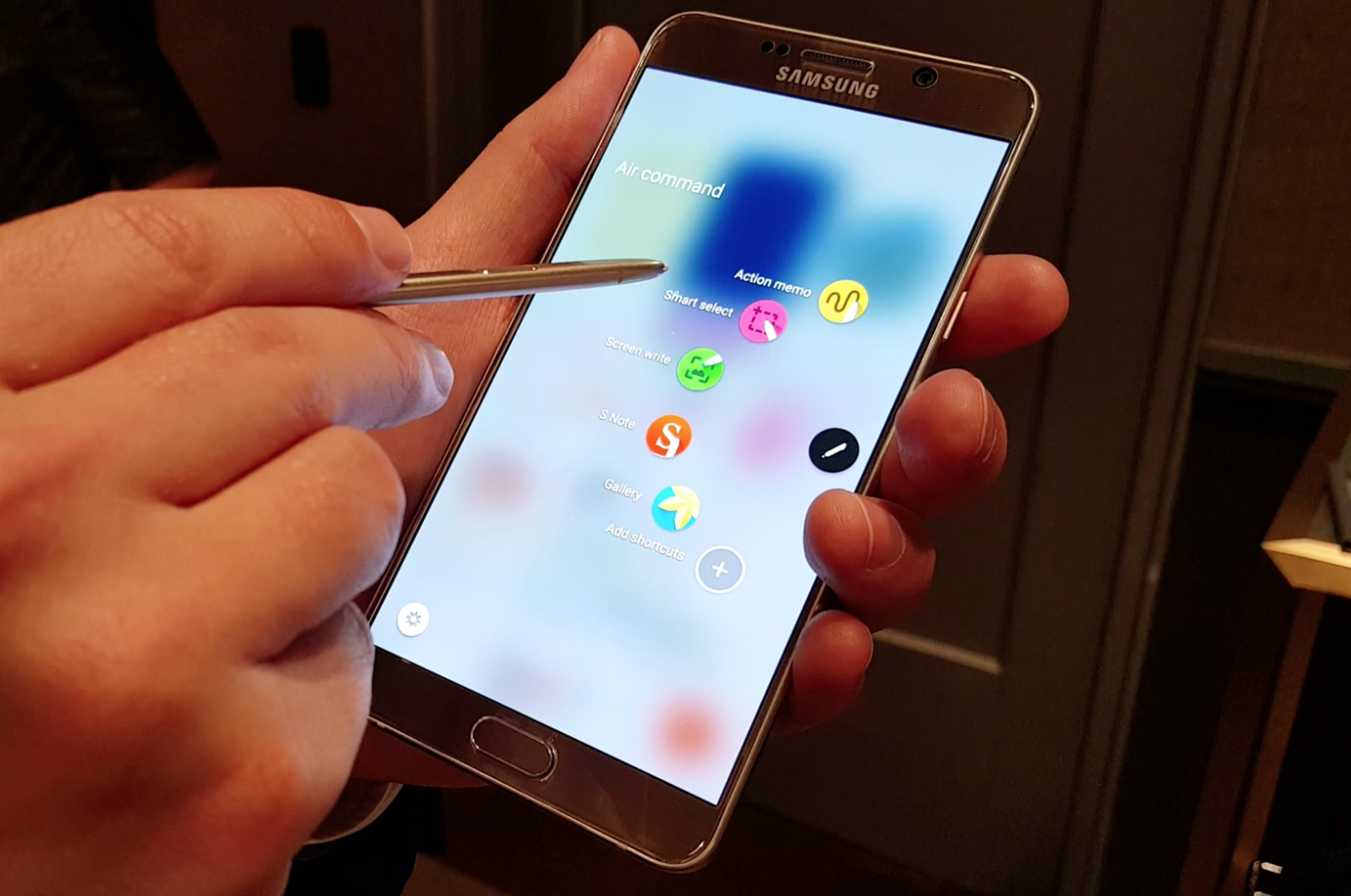 Software-wise, Samsung hasn’t messed with a good thing: you’ll find the same build of Android 5.1.1 running a lighter, smoother version of TouchWiz –- again, like the Galaxy S6. But the S Pen experience has been enhanced, with a new version of Air Command that takes over the entire screen when the stylus is removed.

Removing the S Pen when the screen is off retains the black background, which belies a working monochrome canvas for jotting notes or, as shown in the video above, playing a quick game of Tic-Tac-Toe. A new feature, called Screen Capture, can take screenshots many pages in length, allowing annotations of long lists or multi-page web documents. The S Pen’s sensitivity and accuracy has also been improved, with less lag and fewer missed inputs than previous generations.

Air Command is now customizable, allowing users to add apps to the shortcut screen that take advantage of the company’s S Pen SDK. An increasing number of apps, such as Microsoft OneNote, now work natively with the product. 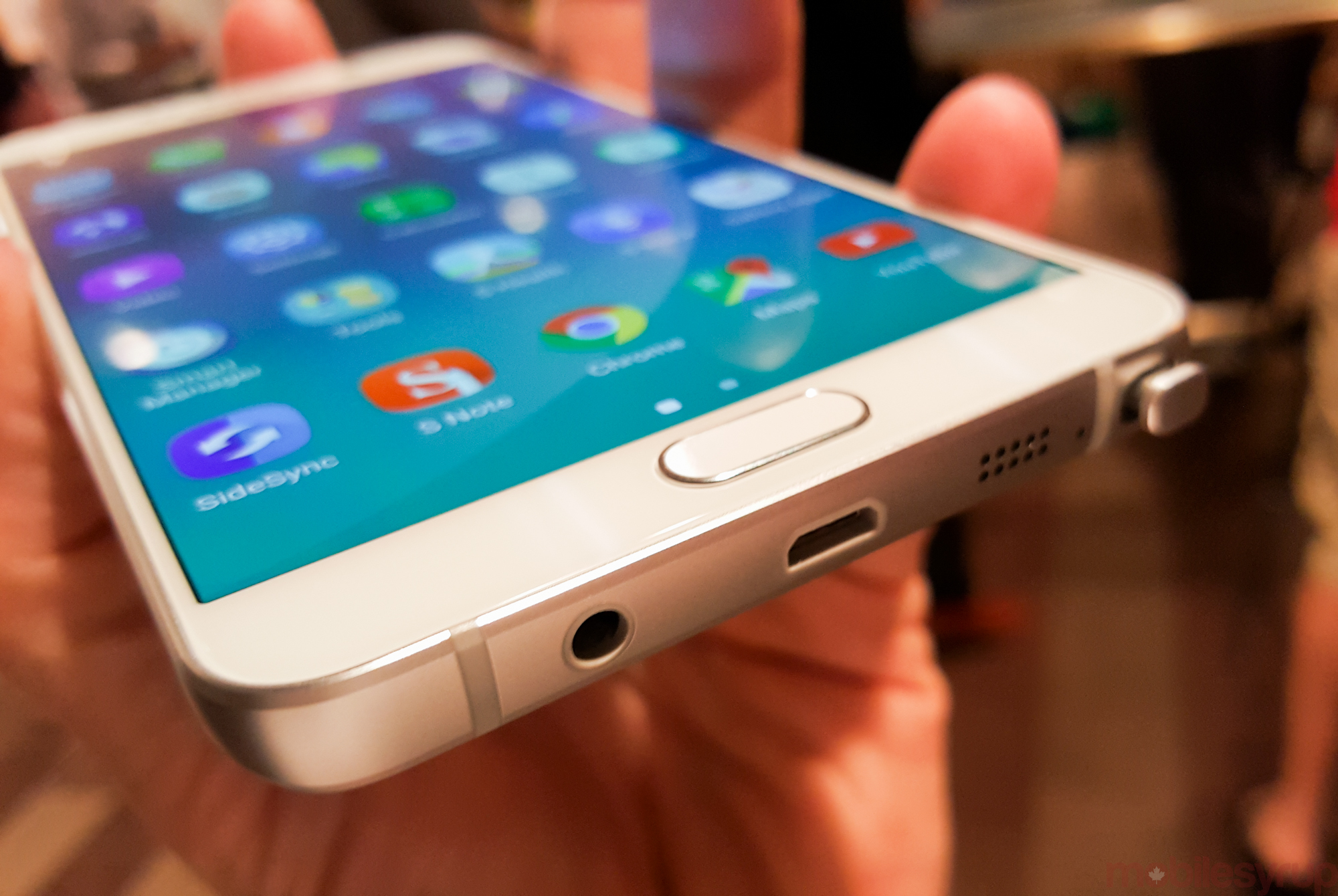 And while Samsung Pay isn’t coming to Canada anytime soon, the company noted that the Note 5’s fingerprint sensor — again, the same one as in the Galaxy S6 line — will work alongside the Knox Suite to enable mobile payments, both over NFC and MST.

On the cellular side, Samsung has upgraded the Note 5’s baseband to support Cat-9 LTE, which supports speeds of 450Mbps using carrier aggregation. Those numbers are still a few years away from being achieved in Canada – Rogers and Bell just rolled out Cat-6 support – it’s provides a bit of headroom for the future. 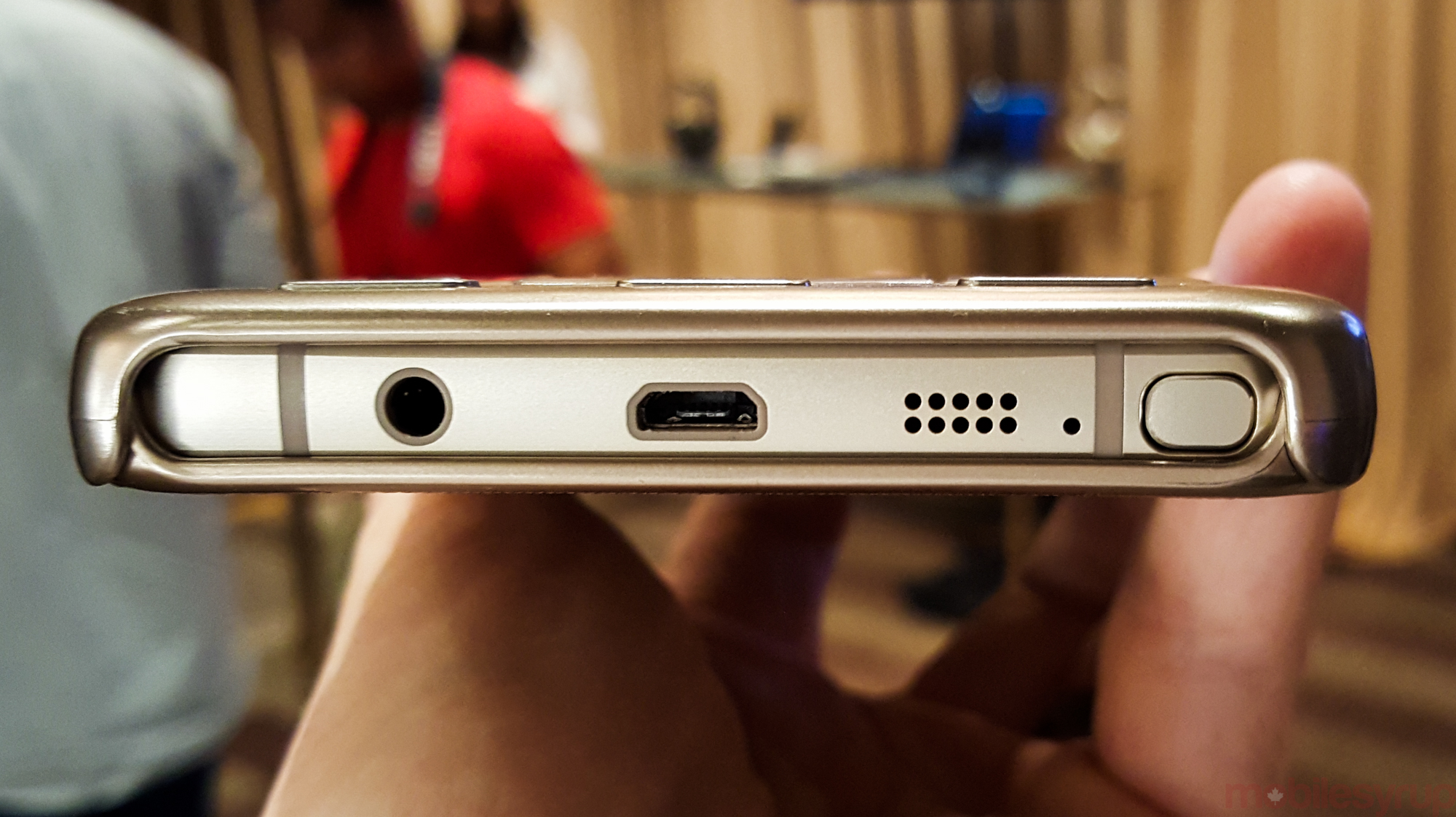 Similarly, the phone supports what Samsung is calling UHQ, or ultra high-quality audio, an upscaling system that takes low-quality and low-bitrate files and streams and upconverts them to 24-bit / 192kHz outputs. The company is particularly proud of this achievement, though it’s unclear how well the feature will work on the low-quality headphones most people are accustomed to wearing on the go. Samsung says its entire Bluetooth headphone line will soon be updated to support UHQ, and will be rolling out shortly after the release of the phone.

Whether the Note 5 will be a significant upgrade, aesthetics aside, will have to wait until August 21st, when the device is released in Canada. We’ll have carrier availability and pricing in a future article.