Describing anything in the financial industry as “fair, transparent and open” may come off as a misnomer for most people, but Toronto-based Financeit firmly believes that’s exactly what it offers.

Financeit is a middleman — the kind that brings together lenders (like big banks and other institutions) and small and medium-sized businesses, so they can offer consumer financing to their customers. Independent merchants, sole proprietors and mom and pop shops are the lion’s share of the 4,000 vendors the company currently has under its belt. All told, there are a whopping $928 million in loan applications received to date, and plenty of them are wielding phone and tablet point-of-sale (POS) systems, according to the company.

Peer-to-peer lending has become a thing in the U.S. with LendingClub and Prosper, as well as in the U.K. with LendingCrowd and Zopa. CommunityLend was Canada’s first P2P lender until its founders pivoted toward what is now Financeit.

The company focuses on four verticals — home improvement, retail, health care and automotive — because those typically have big ticket products or services that people may need to pay over time. Rather than put it on a credit card, which can accrue an annual interest rate of up to 19%, a consumer can apply for a loan through a merchant using Financeit for between 6.99-12.99%. 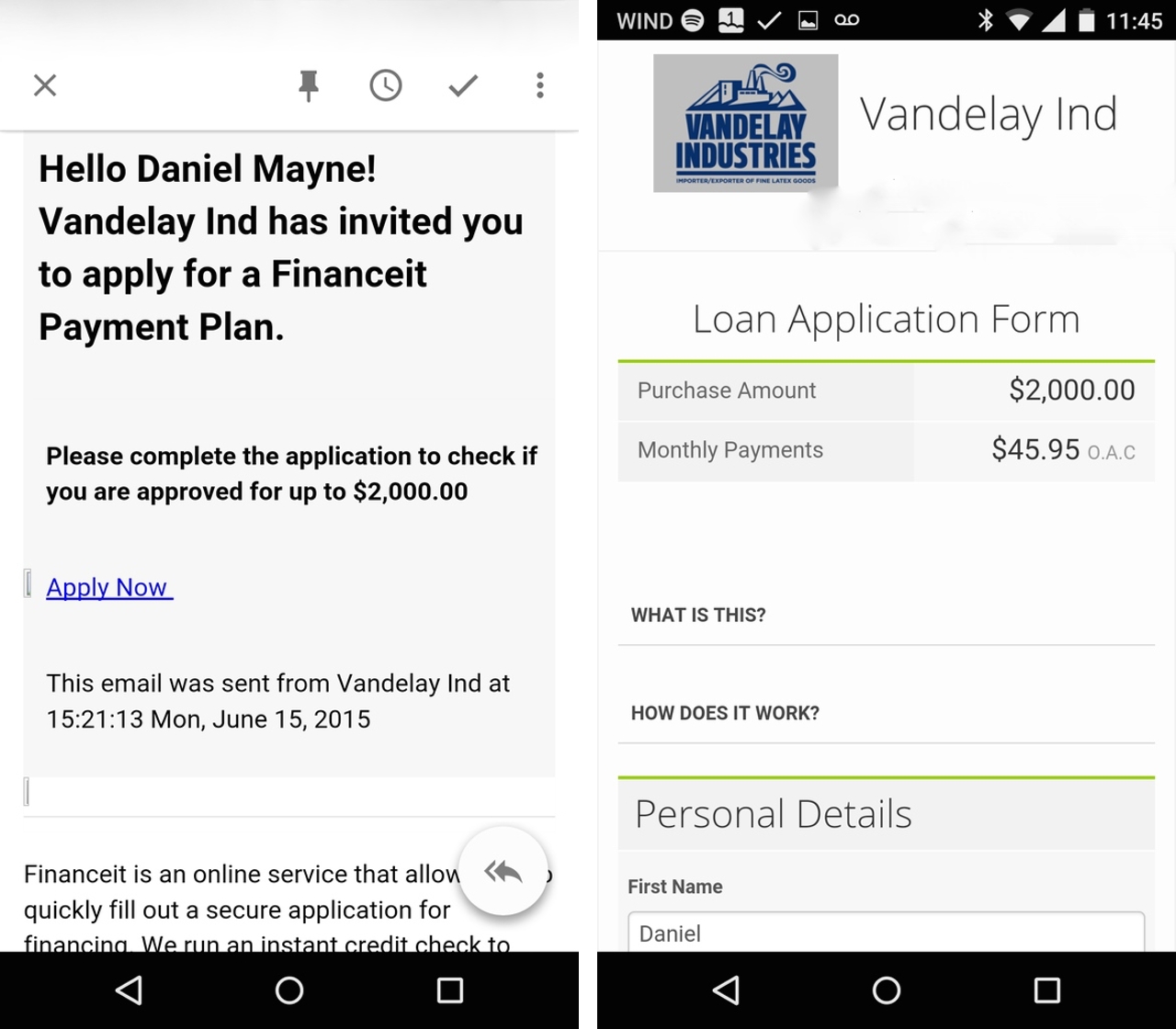 The debt is treated more like a mortgage or car payment, where monthly payments, with or without interest, are laid out equally over the term of the loan. The balance can be paid down as quickly or as often as one chooses because there are no penalties for doing so.

“The problem we’ve been trying to solve is to help these small to medium-sized businesses with the toolkit that’s traditionally only been available to enterprises,” says Casper Wong, co-founder and COO at Financeit in an interview. “About 20% of our volume is retail. Sole vendors running around with a Square or Shopify swiper attached to their phones can apply to work with Financeit.”

A pending deal with Shopify is in the works, Wong told me, and it may help integrate the service further for vendors using Shopify’s tools to run their businesses. The focus is still entirely on brick-and-mortar, but since merchants using Square, Shopify and others like them have physical POS systems, they are essentially the same as someone with a storefront.

As Square and Shopify terminals process credit cards and not debit cards, Financeit has a workaround that enables debit payments.

“We pay the merchant upfront for the cost of the purchase, and then deal directly with the consumer in servicing the loan. The payment plan is not actually with the merchant, it’s with Financeit,” explains Daniel Mayne, the company’s director of customer service.

In other words, a customer pays Financeit directly, and can do so using pre-authorized debit to make the installment payments instead of a credit card, thus avoiding any extra interest. This also makes it possible for approved vendors to offer customers more than one payment option. For example, an independent jeweler who sells his or her wares online or via different conventions and trade shows can still sell to customers who don’t have credit cards or the cash for a bigger ticket item. 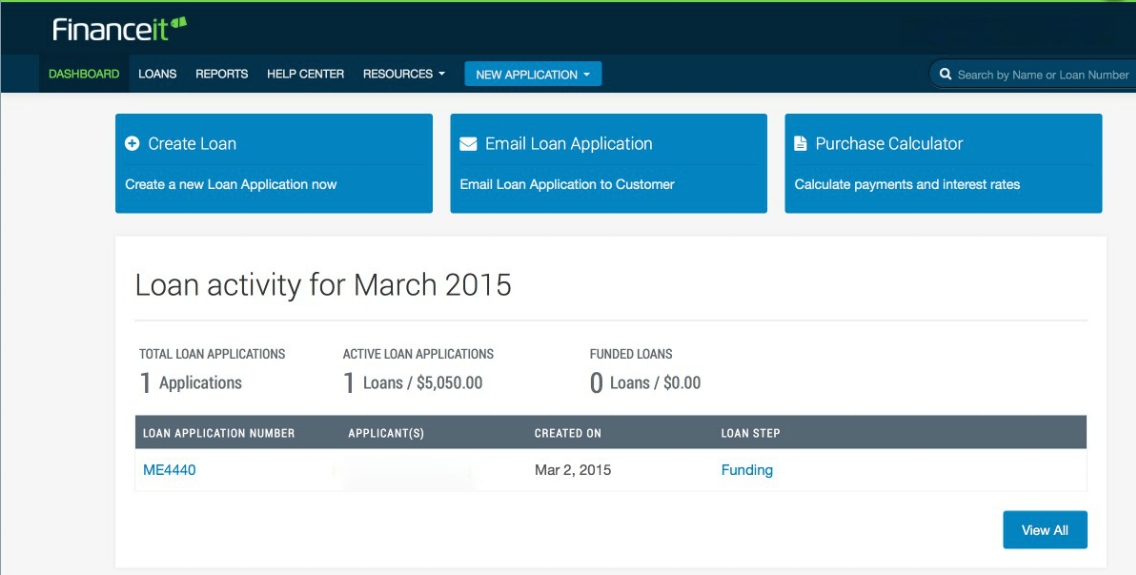 The one thing that slows this process down, however, is that it requires work on both ends. Using the free iOS app, a store owner can scan a customer’s driver’s license on the spot to walk them through the steps to see what kind of loan they might qualify for. The merchant doesn’t store any of that personal data, whereas Financeit does if the loan is approved and the customer signs off. Customers can also do it in advance on their own through the vendor’s website when the dynamic Financeit application is available.

It’s not a cakewalk though. Financeit staff assess affordability on some key factors that include debt servicing and disclosed housing costs, but there is room to adjust if initially declined, which may be finding a co-borrower or asking for less money. Merchants can also turn down deals they don’t like, says Wong.

At the moment, the iOS app is geared towards the merchant, but there are notions of how it could be adapted for consumers down the road.

“The idea of letting a consumer carry their identity on their phone and then use that as a faster way to apply for a loan is something we can use down the road, like Touch ID to auto-fill info, for instance,” says Wong. “We’re looking at other technologies where you can type in your cell number and social insurance number, pull all your info and send it the credit bureau, so you can basically apply for a loan using only your cell number.”

Businesses who want to work with Financeit also have to meet various criteria, starting with having been around for at least two years. The company doesn’t lend money or invest in startups or take part in crowdfunding campaigns, so there is no real fundraising element to this. The criteria gets stiffer depending on the business and vertical, so a contractor will have to jump over more hurdles than, say, a dentist or furniture store. Naturally, there are “checks and balances” in place to avoid money laundering or fraud schemes. There are no fees to join Financeit, or residual monthly or transaction fees, either.

Since smartphones and tablets can be big-ticket items, especially on the higher end, I asked Wong and Mayne about the possibility of financing options for them. Wong noted that there are “talks with one of the Big 3 carriers” on a potential partnership that would allow consumers to buy a phone outright and pay it off in installments without having to sign a contract.

Though it recently changed vendors, Visions Electronics was the largest consumer electronics retailer using Financeit, but no mobile device chains or big box stores are currently doing so. Mayne pointed out that consumers can call Financeit to be directed to retailers who might be able to offer financing plans for mobile devices, or any other particular product or service they might be looking for within the four verticals.

“We tell merchants that we are an extension of their brand, and we underwrite every business that comes on board. And for consumers, we offer no fine print and clear terms so that they know what they’re going to pay upfront with no backdated interest or other hidden fees,” says Mayne.