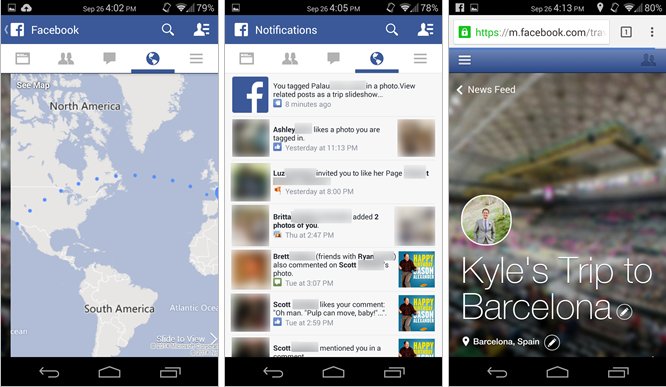 It looks like Facebook is eager to take a leaf out of Google’s book with a new feature that organizes users’ content into stories based on the time and location of their publication.

Avid Google+ users (or, more likely, those that just use the service as cloud storage for their photos) will recognize this as Auto Awesome Stories. Google announced stories this past May and the tool automatically creates miniature slideshows based on photos and videos uploaded from your phone. Now, Android Police reports that a number of users of the Facebook app or mobile site are seeing similar creations crop up based on their trips.

Fittingly called Trip Slideshows, users can expect to see location, photos, videos, and (of course) status updates from their travels appear and will be allowed to tweak the finished product to some extent. What’s not clear is if this is only reserved for users straying from their home location (i.e., just for trips away from home) or if we can expect ‘Trip Slideshows’ of weddings, birthday parties and bachelorettes. The name would suggest that it’s only for traveling Facebookers, though Google’s Stories tool doesn’t have this limitation.

Facebook hasn’t mentioned anything about this feature and it’s obviously only live in a limited beta testing capacity (Android Police reports that one of its readers with Trip Slideshows access is opted into the Facebook app beta). So far, only mobile users are seeing the tool and shared slideshows don’t show up on anyone’s feeds. Check the video below (via Android Police reader Kyle) for an idea of how Trip Slideshow looks in practice:

For anyone keeping score, Google added auto upload functionality with the launch of G+ in the summer of 2011. Facebook introduced its own photo syncing feature in late 2012. Google announced Auto Awesome in the summer of 2013 (at Google I/O) and added Stories earlier this year.