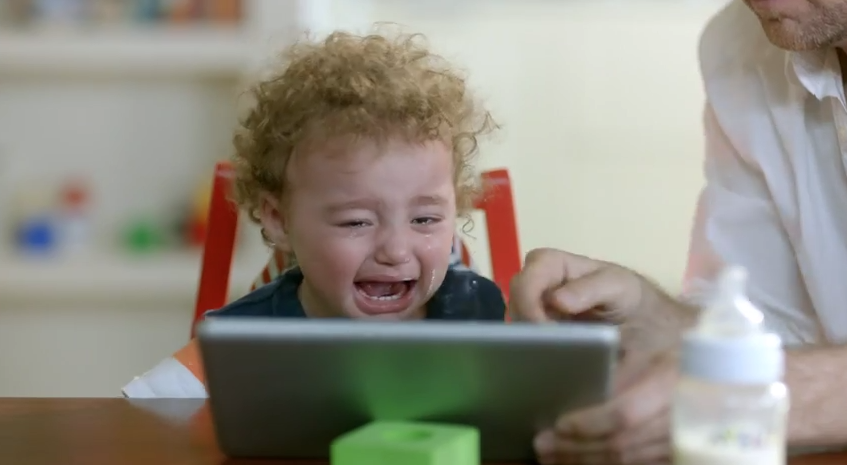 Apple recently came out with an ad for the iPhone called “Parenthood” that focused on family and the connected home. The minute-long commercial highlighted several apps and showed how iOS can be there to help you through the good and bad times. Well, long-time rival Samsung is back once again — the second time in a week — with two ads that target competing tablets, namely Apple’s iPad.

The first commercial shows the benefits of multitasking on the Galaxy Tab S. The scene takes place in a kitchen with a father and his crying baby boy competing for screen time. Samsung declares in the ad, “What’s going on? Ah, it looks like dad’s tablet can only do one thing at a time. What if it were a Samsung Galaxy Tab S? With the Galaxy Tab S, the whole family has something to smile about.”

Apple’s tablet currently lacks split-screen capabilities, or “true multitasking” as Samsung is suggesting, but code within iOS 8 suggests it’s on the radar to be included in a future release.

The second ad is about screen resolution and how Super AMOLED displays, specifically Samsung’s displays, offer a far superior experience than other tablets on the market. “What went wrong here? Ah, it’s not a Super AMOLED. What if it were a Samsung Galaxy Tab S? Compared to many LCDs, Super AMOLEDs give you 100 times higher contrast. Instead of 1000-to-1, you get 100,000-to-1 contrast.”

Samsung’s Q2 results recently missed analysts targets and the company declared that its tablet sales “were sluggish due to a longer replacement cycle than that of smartphones” and that this was caused by “higher shipments of 5-to-6 inch large screen smartphones replaced demands for 7-to-8 inch tablets.”