Android expected to own over 80% of the smartphone OS market share by the end of 2014, BlackBerry 0.8%

Smartphones are becoming the norm as most Canadian carriers have well over 70% adoption rate. However, there is still room for growth and the latest report by research firm IDC shows that global smartphone shipments will reach 1.2 billion units by the end of 2014, up 23.1% from last year. Much of the growth is happening in emerging markets such as India and Indonesia.

In addition, handset prices are also dropping. IDC states the average selling price (ASP) of smartphones will end up being around $314 in 2014, down from $335 (6.3%) from 2013 — certainly in Canada we’ve seen the Nexus 5, Moto G and even a few entry level smartphones come around this price point.

Who’s running the smartphone game? Google’s Android OS “will undoubtedly remain the clear market leader” and is expected to have 80.2% market share by the end of the year. Google and its partners are targeted to ship 1 billion units in 2014. Apple comes in second spot with 14.8% market share, representing 184.1 million iPhone shipments this year. Coming in third spot at 3.5% is Microsoft’s Windows Phone.

BlackBerry is in a different game. Canada’s one-time gem is continuing its free fall and will drop to mere 0.8% market share, representing 9.7 million smartphone shipments. By 2018, IDC is predicting that BlackBerry’s market share will be almost non existent at 0.3%. Hopefully CEO John Chen and Co. can prove these analysts wrong. 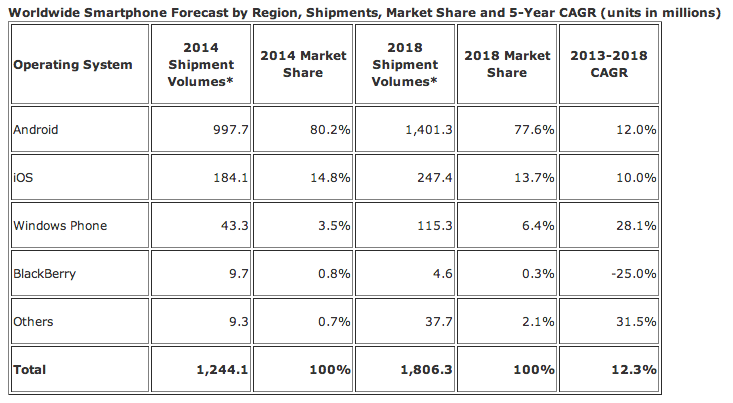