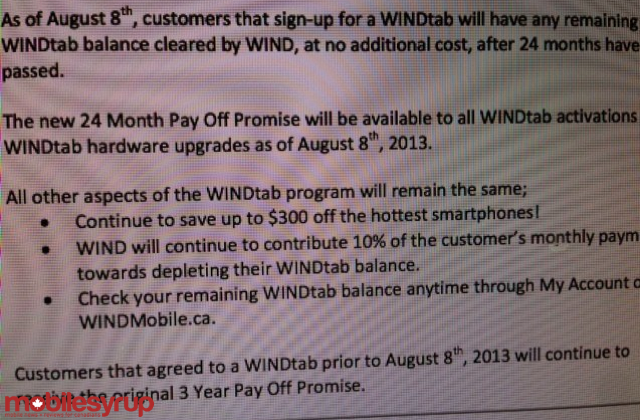 As part of the CRTC’s new ‘wireless code’ the carriers are mandated to adopt a 2-year wireless contract option. So far we’ve seen Bell, TELUS, Rogers and Fido come to the table with the necessary changes, plus they’ve already adjusted the monthly rate plans and hardware subsidy pricing. We’ve now received WIND Mobile’s slight adjustment to their WINDTab option.

Straight from the internal doc, the new structure is called the “24 Month Pay Off Promise” and will be effective August 8th. It’s basically the same as the 3-year WINDTab, but now “customers that sign-up for a WINDtab will have any remaining WINDtab balance cleared by WIND, at no additional cost, after 24 months have passed.” WIND also notes that this new direction is only good for those who activate after August 8th, any current customers “will continue to receive the original 3 Year Pay Off Promise.”

Finally, WIND takes a jab at the incumbent carriers in the doc and states that “Unlike the competition, WIND’s new 24 Month Pay Off Promise has not resulted in more expensive monthly plans, or arbitrary “TAB Repayment” fees.”

Look for the “24 Month Pay Off Promise” to go live tomorrow.
(Thanks tipsters!)