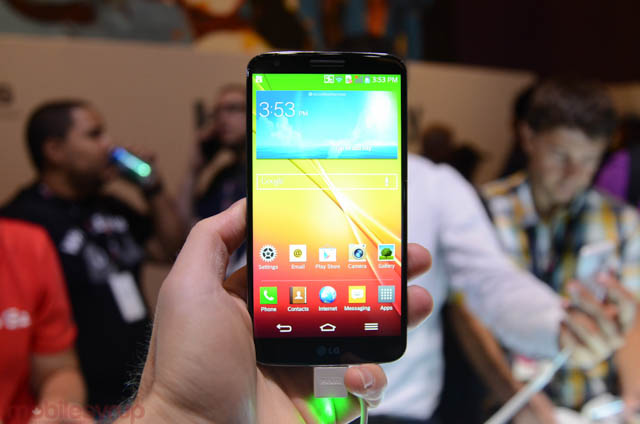 Today, after the LG press conference, which was a lot more restrained and feature-focused than the same one for Samsung in April, we had a chance to look at how the company’s new device measures up to the competition.

At the outset, it was clear that while LG was focusing primarily on features, this is a serious spec powerhouse. From the vivid 1080p IPS display to the world’s fastest mobile chip, there is something for everyone to love. While we can’t fully evaluate the software due to its unfinished state (LG was insistent that it wasn’t running final software, and the bugs present were testament to that fact), we found many of the new features to be quite intuitive. 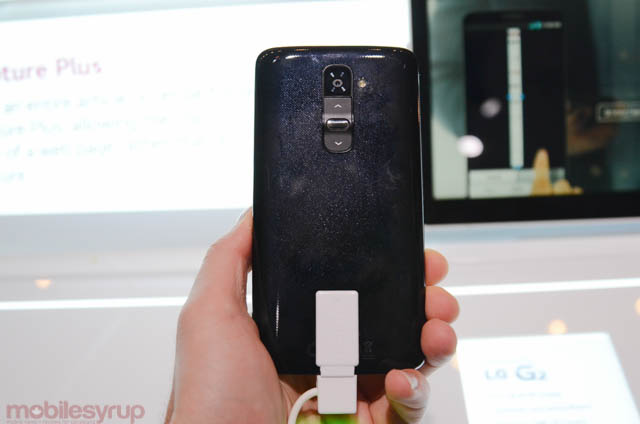 The back of the device is home to the new soft-touch plastic, volume and power buttons, and the 13MP camera. The chassis is enclosed, which gives it more secure, premium feeling when compared to the Galaxy S4, but the positive impression wanes somewhat when compared to the HTC One’s aluminum frame.

The placement of the volume buttons, which double as both an app launcher and camera shutter, feel immediately familiar, something I wasn’t expecting when viewing the G2 for the first time. Due to the recessed nature of the volume buttons they don’t appear too prone to accidental presses, but the power button, which also doubles as a notification light, may be a bit more likely to cause trouble when in a pocket or bag.

When compared to the Galaxy S4 and HTC One, LG comes in slightly taller and thicker, but it’s by a small degree. Indeed, holding the G2 next to the Galaxy S4 makes it appear almost identical in size, and the smaller screen bezels give the device a positively futuristic impression.

Viewing angles and colour depth on the G2 are fantastic, and as I said in the introduction article, it could be the best mobile screen I’ve ever seen. LG’s use of on-screen navigation buttons is a departure from earlier devices, and from Samsung, and works in the company’s favour here.

The placement and colour scheme of the buttons can be altered, and a fourth button can even be added to bring one-touch access to Quick Memo or the notification shade. It’s a small but impressive feature that is sure to please a lot of Android tweakers. 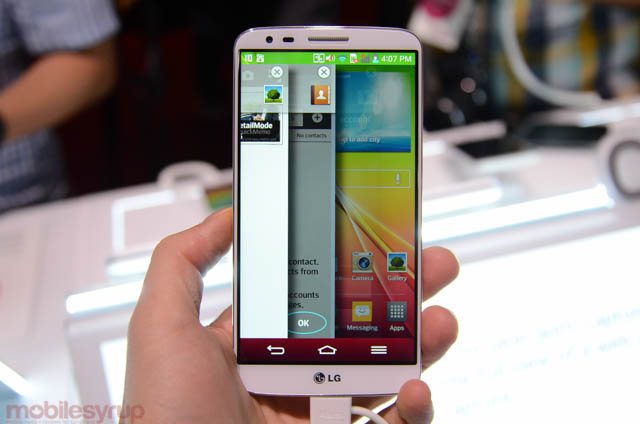 Some of the other features, like Slide Aside, are a little more vexing, but could still prove to be useful down the line. It allows users to slide three fingers across the screen in an app to save its individual state; these apps can be stacked like cards, and accessed from the notification bar. It’s not clear how this is different from the regular multitasking screen, which is accessed by holding down the virtual home button, but we’ll wait until the phone is available before making conclusions. 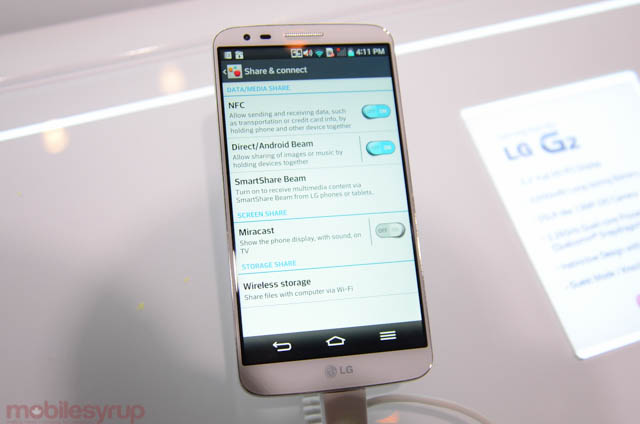 The phone comes with LTE-Advanced support, which is built into the Snapdragon 800 baseband, as well as NFC, WiFi Direct, Miracast and wireless storage. The 3000mAh battery looks to be extended even further than the equivalent competitors’ device, too, as LG has built something called Graphics RAM (GRAM) into the device to take some strain off powering the vivid 1080p screen.

Gestures weren’t talked about a lot in the announcement, but they’re there. One such application is to turn on the screen by tapping twice, and users can turn it off by double-tapping the status bar. Raising a ringing phone to your head will answer the call, and LG included a couple Samsung-like gestures akin to Smart Stay and Smart Pause, which keeps the screen on when looking at it, and pausing a video when looking away. 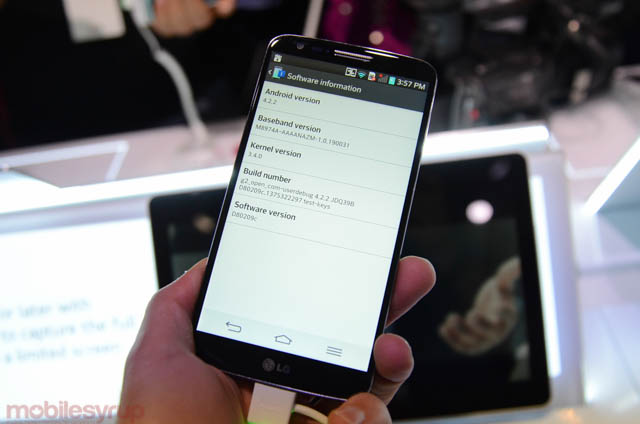 LG has loaded Android 4.2.2 on the G2, and while it looks to deviate a fair amount from the vanilla experience I didn’t find performance to be negatively affected. Indeed, perhaps thanks to the Qualcomm 800 or LG’s optimizations, the UX felt far more fluid than Samsung’s TouchWIZ (which has improved since launching in May), and the features less gimmicky and arbitrary.

Other features like Guest Mode, Text Link, Plug & Pop, and Quick Remote all come off as legitimately useful. Text Link especially caught my attention, as deriving context from swaths of text in Android has traditionally been challenging. For example, if your friend sends a text message inviting you to see a movie at a certain cinema, holding down your finger on the screen will generate a new calendar entry and a maps request.

Guest Mode is something that has traditionally been only available on tablets, and limits secondary users to certain apps or features. 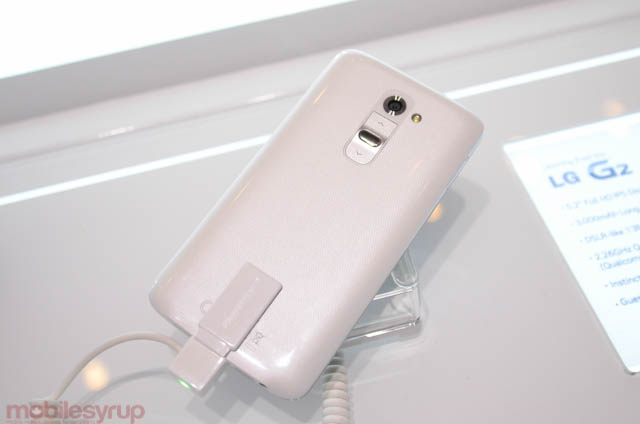 LG G2 will launch in the fall on multiple carriers, likely Rogers, TELUS and Bell, and we will be getting review units in the coming weeks. It will be available in white and black, in 16GB or 32GB varieties. 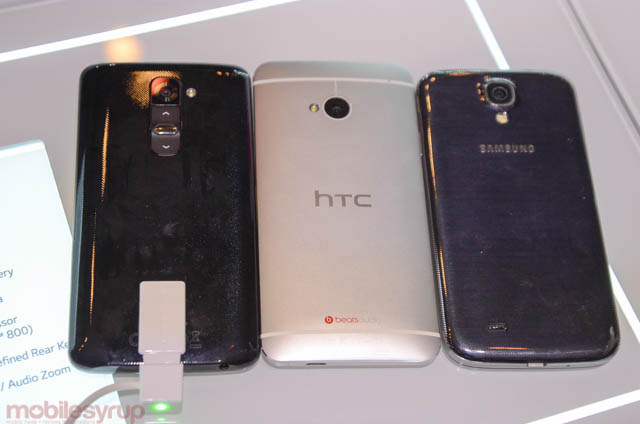 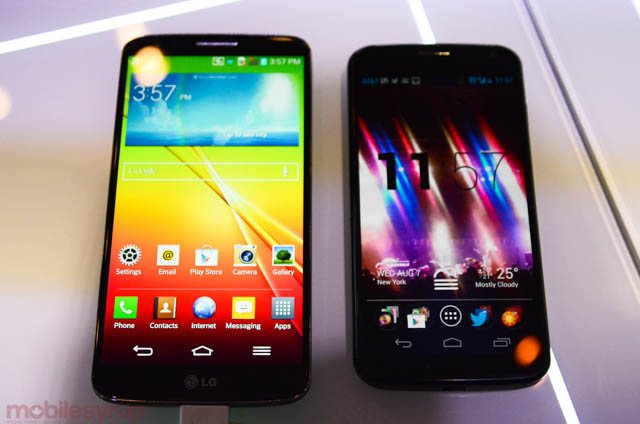 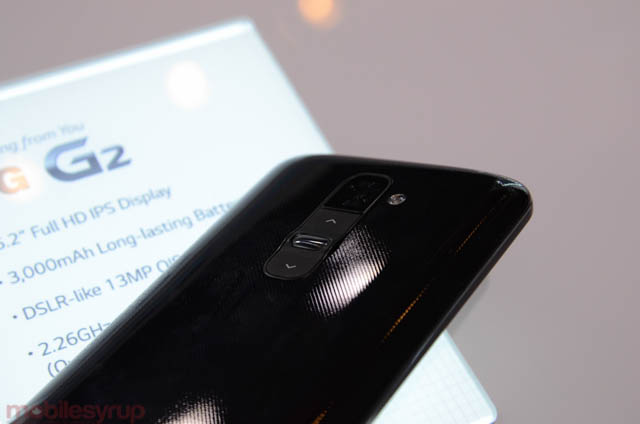 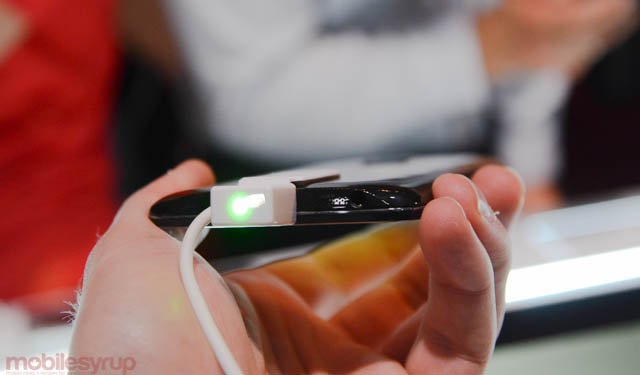 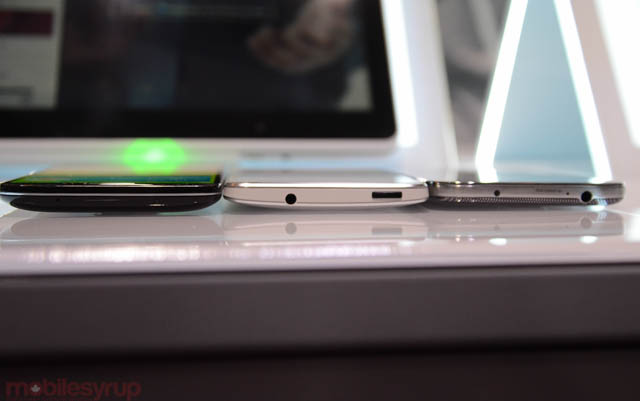