TELUS boasts about their healthcare initiatives, slams the government for its slow pace of adoption and innovation 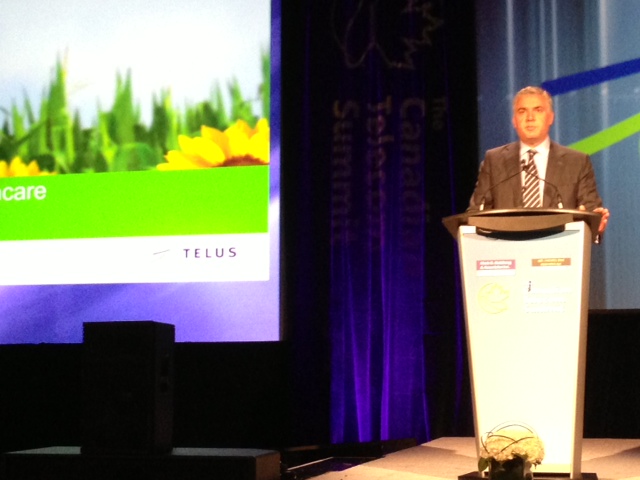 Joe Natale, TELUS’ Chief Commercial Officer, spoke this morning at the Canadian Telecom Summit and started off by asking the audience if “something happened in Ottawa this morning?” Natale didn’t speak about the axed TELUS/Mobilicity acquisition, but brought forth their foray into “wireless medicine.” TELUS has been investing for years into the health care sector, ‘ever since we started putting poles in the ground,’ leading this is their TELUS Health business.

Natale noted that “healthcare in Canada is in dire need of change.” TELUS has invested over a $1 billion into healthcare since 2008 and has a mission to “unleash the power of the Internet for Canadians at home, at work and on the go.” TELUS has worked with 1,600 healthcare innovators to bring the future faster, but Natale slammed the government for its slow progress and lack of healthcare innovation. TELUS, plus other wireless carriers, “can help deliver a triple win when it comes to healthcare by saving lives, improving healthcare and cutting costs.”

Natale suggested that there should be a private element to wireless medicine and healthcare IT services, specifically incentive doctors to upgrade their equipement and lead Canada with innovative smartphone applications. “Right now, governments pursue a cumbersome one-size-fits-all approach where officials pick a single supplier to build a system or platform – and then everyone else must then somehow bolt their existing legacy applications to it. It’s a top-down, slow and innovation-allergic approach. We can do better. Why not license multiple qualifying vendors, technologies and applications. Open it up wide. The more, the better. Then physicians and patients will gravitate toward services and that they decide best meet their needs.”

One example that Natale shared was the success of their TELUS Pharma Space app. This is a new platform that allows people to renew their prescriptions online, or on their smartphone and tablet. They’ve already signed up over 900 pharmacies and 2,500 pharmacists, plus have filled 1.5 million prescriptions.

Natale said that in Ontario, “By 2025, health spending will take up 70 cents of every tax dollar in the province if we don’t innovate for change.”