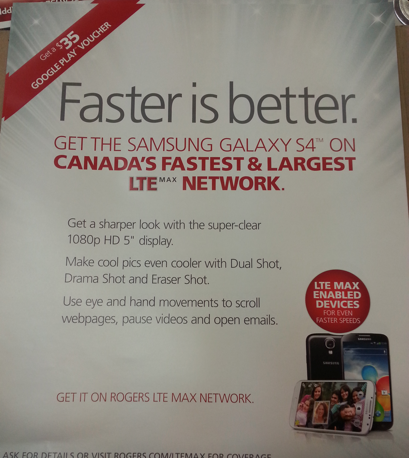 The big push is on for the launch of the Samsung Galaxy S4. This 5-inch Android is currently available for pre-order from many Canadian carriers and will officially be available on April 27th, but will arrive in-stores a week later on May 3rd. Rogers is upping the ante and enticing those customers to purchase one through them ($199.99 on a 3-year) by giving a bonus of a $35 Google Play Gift Card.

The legal fine print says that this promo is “available to new and existing customers with purchase of eligible device (Samsung Galaxy S4) and new activation on any Rogers post-paid plan between April 26 June 30, 2013 with 3- yr FLEXtab agreement. Subject to change without notice.”

Update: Rogers stores are getting stocked with the Samsung Galaxy S4. The flagship Android will officially go on sale tomorrow, but there’s incredibly limited inventory. Rogers has started to fully advertise the $35 Google Play credit offer – this was originally only for those who pre-ordered, but now it’s available to all who purchase.